One of the important phases in IT is the post-production phase, and one of the major challenges is to identify issues in post-production. When multiple applications spit out different logs in different systems, it is important to collate them in one place for the IT team to manage. Here, the ELK stack comes to the rescue. In this tutorial, I will cover what ELK is and how to aggregate the logs from different microservices and push them to one common location.

ELK is an acronym for Elasticsearch, Logstash, and Kibana. It is an open-source software owned by Elastic.

Elasticsearch is an Apache Lucene-based search engine which searches, stores, and analyzes huge volumes of data in almost real time. Elasticsearch can be installed on-premise or can be used as a SaaS application.

Kibana is a software to visualize the Elasticsearch data. It comes as a plugin with Elasticsearch. Elasticsearch and Kibana can be deployed as a cloud service and hosted on AWS or GCP. Kibana can also be installed in on-premise infrastructure. In this tutorial, we will use the Docker image of ELK and set it up in EC2. 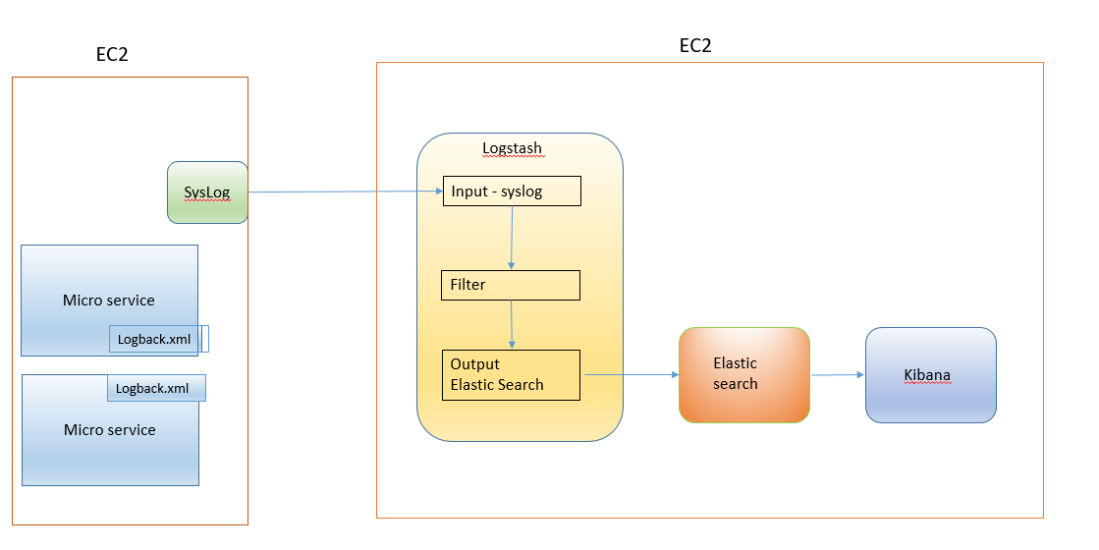 Setting Up ELK on EC2

We will be setting up ELK on an EC2 Ubuntu machine using the official Docker images. Log in to EC2 server and create a directory called "elk" in the path /home/ubuntu/.

Install Docker on EC2 by following the steps mentioned here.

Navigate into the "elk" directory and create a file called docker-compose.yml

Elasticsearch uses a mmapfs directory by default to store its indices. The default operating system limits on mmap counts is likely to be too low, which may result in out of memory exceptions.

On Linux, you can increase the limits by running the following command as root to allocate maximum memory:

Run docker-compose up to spin up all the containers of ELK.

Validate whether Kibana is up by hitting port 5601. You should see the below page:

Set up the index pattern in Kibana.

Once you can see the text in Kibana, that means the connectivity is set for ELK.

Next, we will see how we can push logs from microservices to ELK.

Set Up the Syslog Driver

In order to send the logs from the microservices hosted in EC2, we can use syslog driver to push the logs to Logstash. I am using this project for the logs. We will be running this project in EC2.

We need to make a change in rsyslog.conf present in the Ubuntu machine.

Uncomment the below lines:

Now add the below lines in logback.xml of the spring boot project:

The above setup will push the logs to Logstash.

If the project is built using Docker, then we need to add the drivers with the docker run command:

On starting the server and hitting the API, you can see the logs in Kibana.