This article is part 1 of a series of four subsequent articles. Check out part 2, part 3, and part 4 here.

One of my recent projects involved deploying a Spring Boot application into a Kubernetes cluster in the Amazon Elastic Compute Cloud (Amazon EC2) infrastructure. Although individual components of the overall technology stack have been well-documented, I thought it would still be useful to describe the particular installation and configuration steps. Hence, this article will discuss the following:

The Amazon EC2 environment discussed in this article involves only free tier servers. Thus, interested readers can sign up for AWS Free Tier and develop their own project following this tutorial without expensive hardware/software.

This article is organized as follows. The next section gives a quick overview of the Kubernetes framework. The following section discusses the high-level architecture of the project. The subsequent sections describe detailed steps to complete our project, in particular:

The last section will give concluding remarks.

Kubernetes is an open-source platform to support deployment, management, and scaling of container-based applications. Kubernetes is compatible with various container runtimes, such as Docker. A pod in Kubernetes represents one or more containerized applications that run together for a specific business purpose. A node is a machine where one or more pods are deployed. For example, in Amazon EC2 environment a virtual server instance created from an Ubuntu server image can be viewed as a node. A service brings together one or more pods to represent a multi-tier application with an IP address, DNS name, and load-balanced access to pods encapsulated by the service.

A Kubernetes cluster consists of multiple nodes hosting one or more services. Components in a Kubernetes cluster can be divided into two groups: those that manage each individual node and those that manage the cluster itself. The components in the latter group are also known to be part of the control plane and they execute in a master node of the cluster. The components in the control plane manage configuration data of the cluster, provide access to the configuration data via an API server, furnish scheduling of pods across nodes depending on workload demands, and arrange various controller services for different types of resources. There is at least one master node in a cluster. Components that manage each individual node deal with state management for the pods, node resource usage and performance monitoring, load-balancing and network proxy tasks, and container management.

Some additional definitions are listed below.

For a high-level overview of Kubernetes concepts, a good starting point is the Kubernetes Wikipedia page. For a deeper dive, start here.

The following software versions will be used.

As mentioned previously, the project discussed here involves only Amazon EC2 free tier servers. Referring to the architecture diagram above, we need to create a total of 6 instances, one master node, 4 worker nodes, and one outside node to test access to cluster from outside. Each node will utilize the Ubuntu Server 16.04 LTS (HVM) Amazon Machine Image. That is a server with a single virtual CPU and 1 GB memory, below the recommended benchmark to install Kubernetes in a production environment, but still sufficient for the project in this article.

Let us start with the master node. In the Amazon EC2 console, launch an instance selecting Ubuntu Server 16.04 LTS (HVM) Amazon Machine Image. Accept defaults and create a new key pair when prompted (or use an existing key pair if you already have one).

After the instance starts, click on "Security groups launch-wizard-XX" as shown below.

In the Inbound tab, add custom TCP and UDP rules to allow inbound traffic in 0-65535 port range for all sources. Hence, inbound rules will look like below.

(In any real application the allowable port range will be much narrower.)

Connect to the instance, worker or master, depending on the particular scenario (use the key pair created and chosen while launching the instance). Become root with the command sudo su -  . Commands indicated below should be executed in sequence.

We start by installing Docker.

We continue with installing kubeadm, kubelet and kubectl.

Connect to the instance for master node (use the key pair created and chosen while launching the instance). Become root via  sudo su - . Execute the following.

This last command will take a while to execute. At the end, you should see something like this:

Jot down the command that starts with  kubeadm join which will be needed by worker nodes to join the cluster later on.

Continue the configuration of the master node by executing the following three commands.

At this point, if you execute

The only remaining step in installing and configuring the master node is the installation of a pod network. For our purposes, we will utilize Flannel. To install Flannel, execute

The service named kube-dns with IP address 10.96.0.10 provides DNS service for the cluster. We will utilize that service later on.

At this point, the installation and configuration of the master node has been completed. We now have a cluster that consists of a single master node. The next steps involve adding worker nodes to cluster.

For each of the 4 worker nodes repeat the following.

Check the Running of the Cluster

Once you complete the steps for all worker nodes to connect to the cluster, in master node become root via  sudo su -   and execute  kubectl get nodes . You should see something like this:

At this point, we have fully configured cluster consisting of one master and 4 worker nodes.

In reference to the architecture diagram above, we also need a node outside the cluster to test cluster access from outside. To create that node:

No additional steps are necessary.

In my console, I entered a name for each node under the Name column. The worker nodes were named Web-1, Web-2, Service-1, Service-2, the master node was named Master, and the outside node was named OutsideNode. It looks like below. 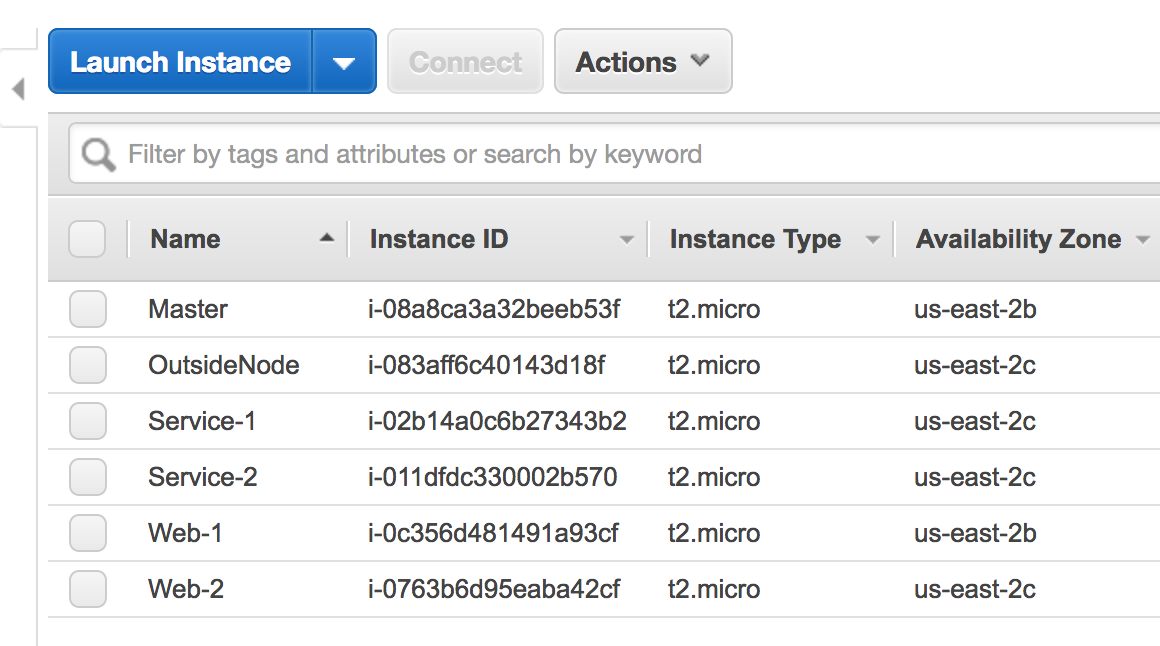 Look for part 2 of this tutorial!