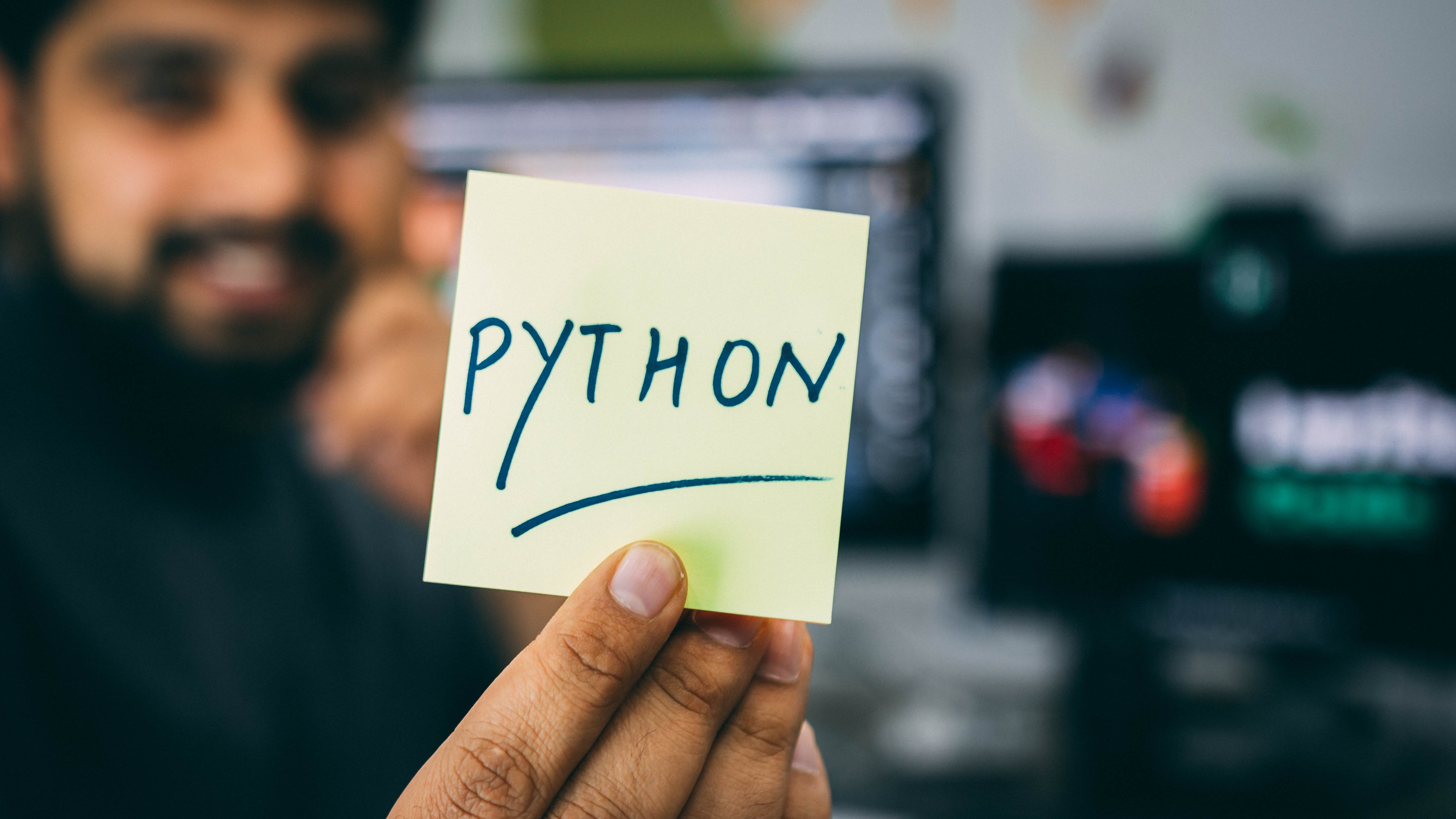 Experience the benefits of Python and DevOps
​

We could not collect a better start than this while writing on Python programming language.

Python scored the second position as the most loved programming language of 2019 in Stack Overflow’s developer survey. Last year, it was in the third position after Rust and Kotlin languages in the same Stackoverflow survey.

Multipurpose, easy-to-learn, continuously-evolving, and open-source, Python is picking up steam worldwide. It was the most-discussed and widely-used programming language of the year 2019.

In addition, it is one of the main languages for developers who are practicing DevOps. DevOps has redefined the way we think about automation and Python is making development easier with its accessibility and flexibility.

This post is focused on the combination of these two trending topics – DevOps and Python. We will talk about how these both together benefit organizations of every size and every domain.

Read on to find one of the most popular combinations of the year – DevOps and Python.

You may also enjoy: Getting Started With Python

The Popularity Of Python: How It Is Contributing To The Core Idea of DevOps? 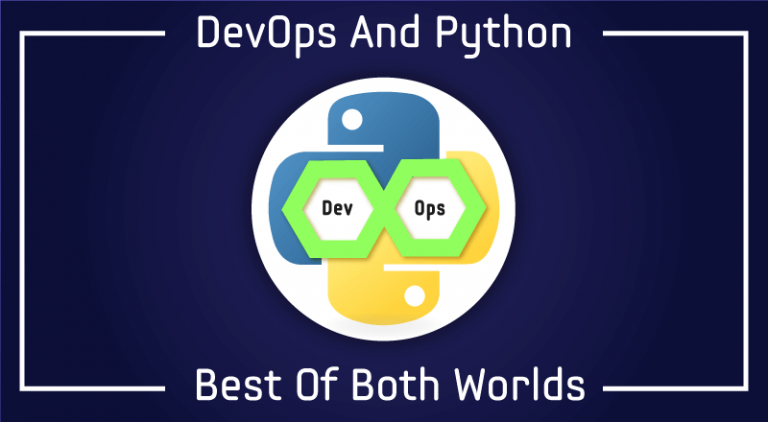 Python and DevOps, together
​

If you think Python is anything new, then you are mistaken.

Python was developed as a successor to the ABC language in the 1980s by Guido Van Rossum. It is multi-paradigm, functional, object-oriented, and widely-used language, powering a range of software platforms and apps from the web to data science and automation.

While DevOps is on the way to become a mainstream phenomenon, Python remains the most critical language to learn in 2019, and it will continue to be so for the foreseeable future.

Python opportunities are at their peak worldwide due to its versatile approach and easy learning curve.

It adequately pairs with modern concepts like DevOps, AI, Machine Learning and holds a dominant place in the modern tech stack.

Developers love this language, and it is considered one of the highly rewarding programming languages in terms of salary and scope.

Python is suitable for:

It seems like the continuous evolvement of Python aims to support most modern concepts possible. And one of them is DevOps.

One of the most important aspects of DevOps is automation. And that’s where Python plays an important role.

Fun Fact: Ansible and Saltstack – both infrastructure management tools — are written in Python.

Before justifying the reasons behind Python’s suitability for DevOps, here is something you must know about DevOps.

DevOps is more than just a software development approach; it is a way of thinking, methodology, and philosophy. It involves tools, mindset, processes, and even culture. DevOps as a philosophy is required but one must not forget that DevOps focuses on its tools more than anything.

Infrastructure and integration are given the highest importance when it comes to DevOps. As infrastructure is redefined and automated, sysadmins, DevOps engineers, DevOps architects, and developers require accessibility, flexibility, and simplicity in any language they choose.

On the other side, integration of code through various DevOps tools also requires DevOps engineers to check for dependencies and configuration management. Hence, it is vital to select a language that is flexible, stable, simple, supports multiple platforms, and accessible to everyone.

The easy learning curve and vast community support of the language are icing on the cake.

Here are some factors to consider:

DevOps And Python: Agility Is The Aim

Python is ranked #1 in the IEEE Spectrum’s sixth annual interactive ranking of the top programming languages. The popularity of Python is consistently dominating the software space, especially at the backend and infrastructure level.

Python is known for its easy-to-remember and direct syntax which makes it easier for the developer to build fast. Python is a great language for scripting, deployment automation, and web development. This makes it one of the most suitable languages for DevOps.

Fundamentally, DevOps means agility and automation. Python helps achieve the same through a wide array of libraries and packages, accessibility, and flexibility. Python is a scripting language, and it can be used in many different ways for many different types of jobs.

Agility is an inevitable aspect of modern development, and organizations must consider it to deliver an exceptional user experience. DevOps and Python is one such rare combination that promises agility, giving you an edge over your competitors.

DevOps not only puts software development on the fast track but gauges an organization’s ability to handle the change.

This is what should be the motto for every organization regardless of its type, size, and domain. Changes in customer demands, changes in technology, changes in the market, and changes in the overall business landscape shouldn’t go unnoticed. You must embrace it to stay ahead of the rest.

We are observing a true transformation where infrastructure is being written as code and deployment is automated. Teams aren’t working on the same language or framework, making flexibility a requirement rather than an advantage.

Concepts that allow the exploration of new tools and frameworks are welcomed by the community, and in fact, bring huge benefits along with choosing the most suitable tech.

These are 19 principles summarized in the Zen of Python, highlighting Python’s popularity. 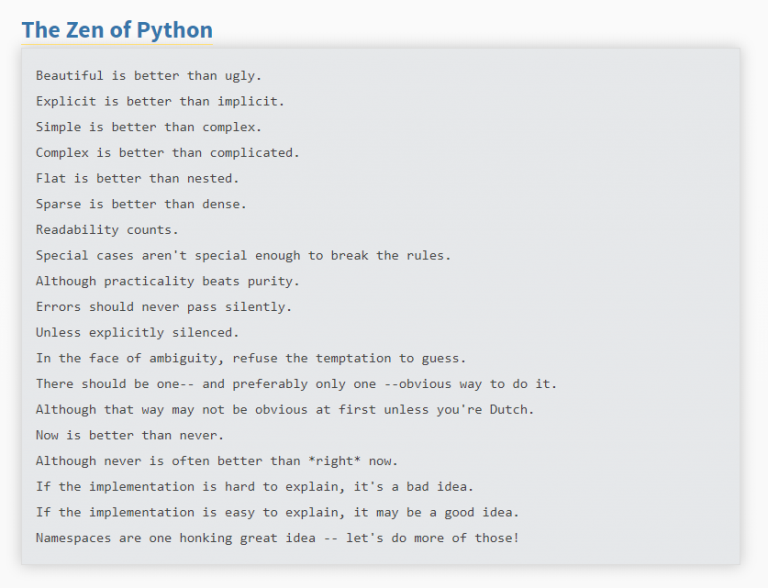 DevOps automates development and deployment but at the same time, it helps organizations handle complex challenges in a simpler, streamlined, and more secure manner than the traditional approach. In DevOps, everyone is involved; everyone follows a shared vision.

On the other hand, the simplicity and readability of Python are making development much easier for novice and experienced developers. It also requires minimal coding, blends well with other technologies and platforms, and supports third-party packages without any hassle.

This combination ensures simplicity as its key benefits.

DevOps And Python: Efficiency Is Must

DevOps and Python both have their separate benefits and limitations. Regardless of the language you choose for your next project, DevOps seems more practical and lucrative to implement.

Efficiency here refers to how your code is written through the right practice, process, and patterns. This is as important as how you define your productivity. Efficiency is not an end result, but a continuous practice. It must be improved time after time to increase quality and user satisfaction.

Efficiency is certain when you choose Python as language and DevOps as a development practice.

DevOps And Python: Achieve What’s Next

Whether you consider web development, want to work on a data science project, or simply want to enhance the backend of an existing app, Python is a language to go for. Similarly, DevOps is more than just a set of tools and practices.

It puts you on the "continuous" journey of improvement where user feedback plays a key role.

Personalization and automation will be essential in the upcoming years, and this combination certainly gives the desired result.

You can build any type of software, use multiple languages, get work done from diverse and cross-functional teams, and provide your users a great user experience.

In addition, sustainability and innovation are key drivers of tomorrow’s next-gen solutions. Organizations must choose technologies that help them achieve goals effortlessly and generate the newest kind of opportunities for the entire business landscape.

DevOps And Python: A Promising Combination

Python has its own advantages of flexibility and accessibility, and DevOps is certainly a way forward. Both are modern, novel, and beneficial concepts that will make things easier and increase productivity, improve quality, and fulfill ever-changing customer expectations. Will you adopt this combination to experience the benefits?

My Journey With Python (Part I)