Understanding both Docker and Kubernetes is essential if we want to build and run a modern cloud infrastructure. It's even more important to understand how solution architects and developers can use them when designing different cloud-based solutions. Both VMs and Containers are aimed at improving server utilization and reducing physical server sprawl and total cost of ownership for the IT department. However, if we can see the growth in terms of adoption in the last few years, there is an exponential growth in container-based cloud deployment.

Fundamentals of VM and Docker Concepts

Virtual machines provide the ability to emulate a separate OS (the guest), and therefore a separate computer, from right within your existing OS (the host). A Virtual Machine is made up of a userspace plus the kernel space of an operating system. VMs run on top of a physical machine using a “hypervisor,” also called a virtual machine manager, which is a program that allows multiple operating systems to share a single hardware host.

There are mainly two modes of operation in CPU, user mode and kernel mode. When we start a user mode application the OS creates a process with a private virtual address space to play around. We may have many userspace processes running but they can be made to run in isolation so if one process crashes then the other processes are unharmed. However, user processes may require special services from the OS (e.g, I/O, child process creation, etc.) which can be achieved by performing system calls which temporarily switches the process into kernel mode by a method called trapping. The instructions which can only be executed in kernel mode (eg, system calls) are called sensitive instructions. There are also a set of instructions which can trap if executed in user mode called as privileged instructions.

Containers are a way of packaging software, mainly all of the application’s code, libraries and dependencies. They provide a lightweight virtual environment that groups and isolates a set of processes and resources such as memory, CPU, disk, etc., from the host and any other containers. The isolation guarantees that any processes inside the container cannot see any processes or resources outside the container. A container provides operating system-level virtualization by abstracting the userspace. Containers also provide most of the features provided by virtual machines like IP addresses, volume mounting, resource management (CPU, memory, disk), SSH (exec), OS images, and container images, but containers do not provide an init system as containers are designed to run a single process. Generally, containers make use of Linux kernel features like namespaces (ipc, uts, mount, pid, network and user), cgroups for providing an abstraction layer on top of an existing kernel instance for creating isolated environments similar to virtual machines.

Figure 1: Difference between VMs and Containers

There are several different types of namespaces in a kernel that Docker makes use of, for example:

NET: It provides the container with its own view of the network stack of the system (e.g. IP addresses, Routing tables, port numbers, any other.

PID (Process ID): The PID namespace ( Linux command “ ps -aux ” PID column) provides containers their own scan view of processes including an independent init (PID 1), which is the ancestor of all processes.

MNT: It provides a container its own view of the “mounts” on the system. So the processes in different mount namespaces have different views of the filesystem hierarchy.

UTS (UNIX Timesharing System): It provides a process to identify system identifiers (i.e. hostname, domain name, etc.). UTS allows containers to have their own hostname and NIS domain name that is independent of other containers and the host system.

USER: This namespace is used to isolate users within each container. It functions by allowing containers to have a different view of the UID (user ID) and gid (group ID) ranges that can be different inside and outside a user namespace which provides a process to have an unprivileged user outside a container without sacrificing root privilege inside a container.

Control groups (cgroups): It's a Linux kernel feature that isolates and manages different resource like CPU, memory, disk I/O, network, etc. consumption. Cgroups also ensure that a single container doesn’t exhaust one of those resources and bring the entire system down.

Docker is container-based technology and containers are just user space of the operating system. At the low level, a container is just a set of processes that are isolated from the rest of the system, running from a distinct image that provides all files necessary to support the processes. It is built for running applications. In Docker, the containers running share the host OS kernel. Docker is an open-source project based on Linux containers. It uses Linux Kernel features like namespaces and control groups to create containers on top of an operating system. Docker enclose an application’s software into an invisible box with everything it needs to run like OS, application code, Run-time, system tools and libraries etc. Docker containers are built off Docker images and the images are read-only, So Docker adds a read-write file system over the read-only file system of the image to create a container. Docker is currently the most popular container and why its so popular, different architecture components, use cases will describe in details in below sections. 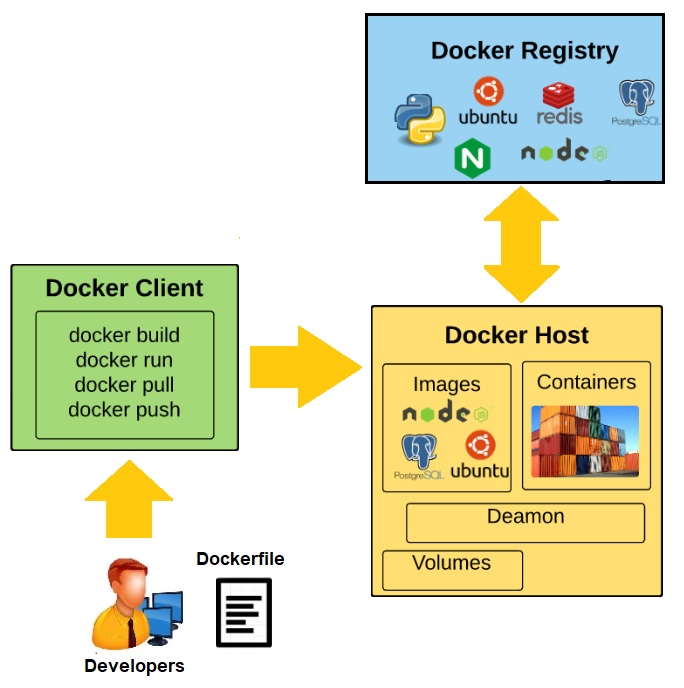 Docker Client: This is the CLI (Command Line Interface) tool used to configure and interact with Docker. Whenever developers or users use the commands like docker run   the client sends these commands to Docker daemon (dockerd) which carries them out. The docker command uses the Docker API and the Docker client can communicate with more than one daemon.

Docker Daemon: This is the Docker server which runs as the daemon. This daemon listens to API requests and manages Docker objects (images, containers, networks, and volumes). A daemon can also communicate with other daemons to manage Docker services.

Images: Images are the read-only template/snapshot used to create a Docker container and these Images can be pushed to and pulled from public or private repositories. This is the build component of docker. Images are lightweight, small, and fast as compared to Virtual Machine Images.

Containers: Applications run using containers and containers are the running instance of an image. We can create, run, stop, move, or delete a container using the CLI and also can connect a container to one or more networks, attach storage to it, or even create a new image based on its current state.

Docker Registries: This is the distribution component of docker or called as Central repository of Docker images which stores Docker images. Docker Hub and Docker Cloud are public registries that anyone can use, and Docker is configured to look for images on Docker Hub by default. When we use the docker pull or docker run commands then the required images are pulled from our configured registry. When we use the docker push command, our image is pushed to our configured registry. We can upgrade the application by pulling the new version of the image and redeploying the containers.

In a Docker cluster environment, there are lot of task need to manage like scheduling, communication, and scalability and these tasks can be taken care by any of the orchestration tools available in market but some of the industry recognized tools are Docker Swarm which is a Docker native orchestration tool and “Kubernetes” which is one of the highest velocity projects in open source history.

Master Components: Master components provide the cluster’s control plane and are responsible for global activities about the cluster such as scheduling, detecting and responding to cluster events.