JSON RPC, methods, calls, requests — what does it all mean?! When you start building an app on the Ethereum blockchain, you’re introduced to a host of new concepts, request methods, and naming conventions to employ. It can be overwhelming. The Infura team are experts in web3 infrastructure. We build open-source tools and materials to help more developers interact with Ethereum and IPFS.

In this tutorial, we leverage the collective experience of our team to bring you an in-depth guide to reading and writing requests to the Ethereum blockchain, using Infura.

Before jumping into the meat of this tutorial, let’s clarify some key terminology. Below is a list of important terms and their corresponding definitions that you need to get familiar with.

A developer interacts with Infura by sending a request through JSON RPC either over HTTP or WebSocket, as a single request or as a batched array. Requests follow this format:

Because you should be posting this to an endpoint that has your v3 key in it, we can always associate these requests with a key or a project.

The method is essentially what function we are asking an Ethereum node to execute. This will either request data from the node, execute an EVM function and return a response, or transmit data to the Ethereum network (send a transaction). Currently, there are 65 methods that are supported by popular Ethereum clients (Geth, Parity, Besu, Nethermind). 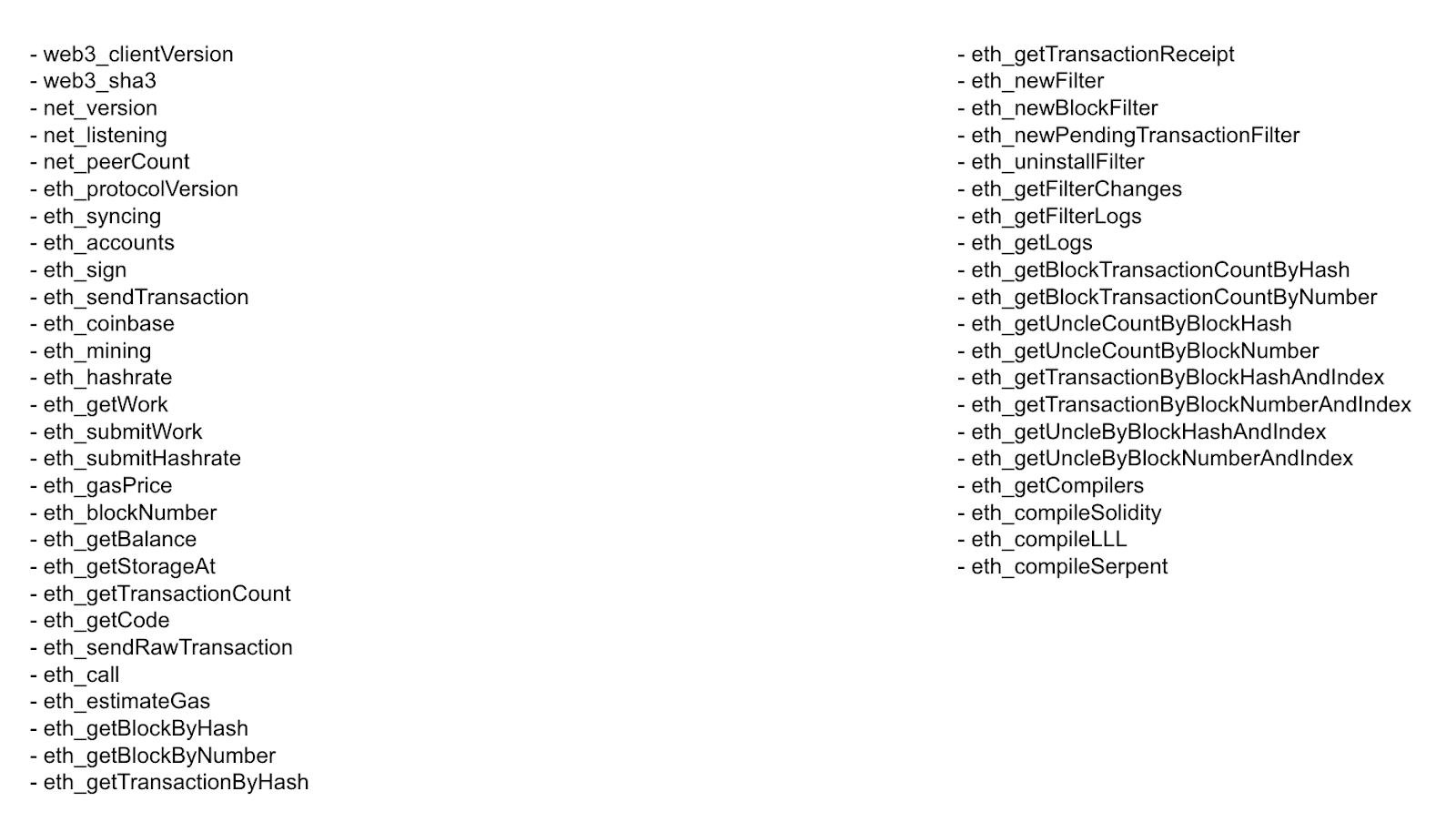 The most commonly used methods are highlighted in bold and comprise the vast majority of Infura’s traffic.

These methods can be grouped into the following categories: 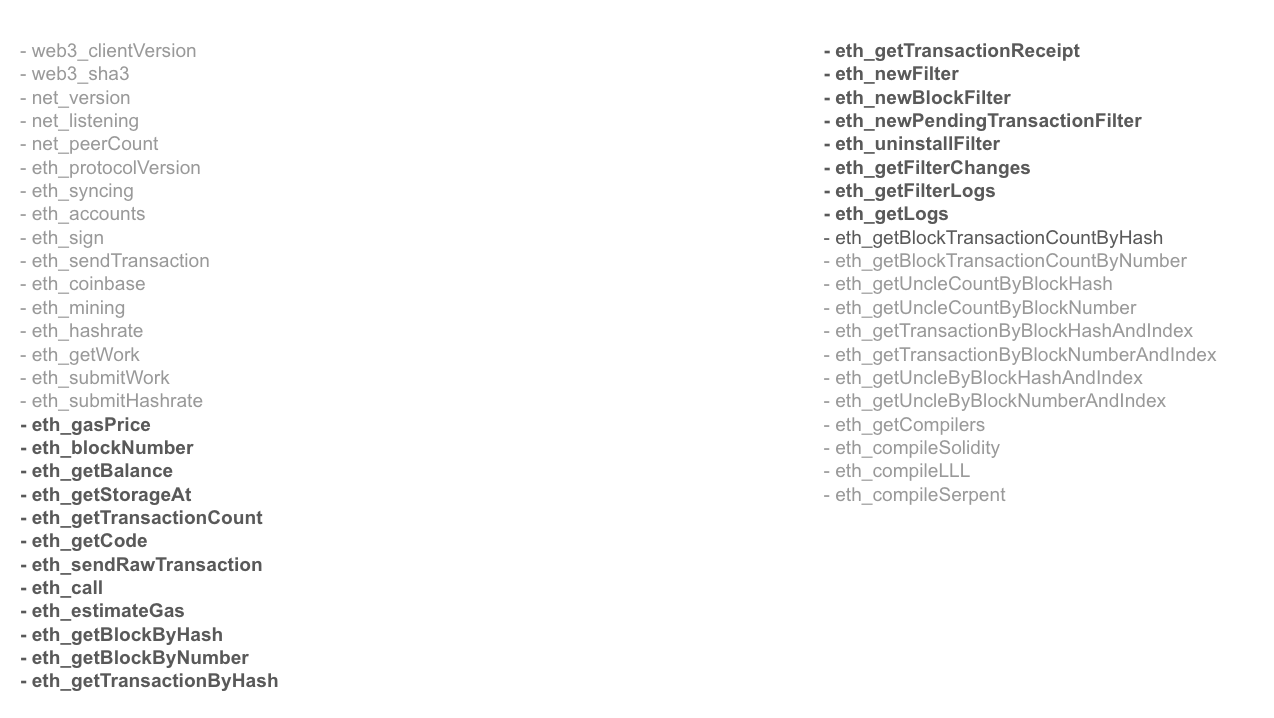 These methods retrieve static data about a particular block in the blockchain. This data is contained in the blockchain headers and could include information like block number or transactions mined, for example.

This method retrieves the simple state data for addresses. It doesn’t matter whether that address is a user or a smart contract. Any address can have an ETH balance.

The concept of smart contracts, and interacting with them, is what makes Ethereum different from other blockchains. A smart contract is two things:

Below are the most common methods for interacting with smart contracts:

ERC20 is one standard for how developers can create a token. Almost all wallet software understands this standard, so if you want to create a token and make it easier for people to interact with it, ERC20 is a good place to start.

Eth_call is the most commonly used method for interacting with smart contracts, particularly ERC20 contracts. A typical eth_call request looks like this:

At first glance, it’s not clear what any of this information represents. Let’s break it down:

The "id":1 field is an identifier string is set by the requester and helps make sure the client and server are communicating in the same context. The "jsonrpc":"2.0" field specifies the version of the protocol and must be exactly “2.0”, which the protocol expects.

The “from” field is the data requester, which could be any wallet address or smart contract. This field is optional.

Etherscan tells us that this smart contract is for the Dai Stablecoin (DAI). At this point, we also have the opportunity to inspect the original Solidity code for this contract and confirm that it’s verified:

Great! Now we know that this address represents an ERC20 contract.

Created in 2015, ERC20 is a relatively simple token standard and the most common contract type on Ethereum. Within this standard, an ERC20 token has to implement the following functions:

At certain times, an ERC20 token also has to emit the following events:

You can view the standard on GitHub for more detail about how these functions work and when to emit these events. For now, let’s try to request the balance for some of the DAI tokens.

To query our balance using eth_call, we use the balanceOf function of the token contract. The JSON-RPC format expects eth_call to have a specific data field format that requires normalizing the contract function balanceOf to a short Function Selector. To do this, we take out the names and the type of inputs it takes, and take that as a string. We then run it through Ethereum’s sha3 keccak hash:

Let’s say we wanted to call the transfer function. Again, we would need to normalize the function first. We take the string transfer(address to, uint tokens) and hash it to get the 4-byte signature. Again, we take that 4-byte signature, pad it with zeros, insert the address and the number of tokens, and package this information into a data string. We then sign the transaction and send it using eth_sendRawTransaction.

At this point, nodes start broadcasting our transaction out to the rest of the network. Eventually, a miner will get a copy of it, go through all their proof-of-work stuff, get lucky and find a hash that matches the proof-of-work, and broadcast a block that contains our transaction. Every node that receives this block reads the transactions within it, re-executes them, and holds our ERC20 token transaction in the EVM to update.

Gas is sent along with any other values and is spent running the EVM code. The miner gets the block reward, plus all the gas spent in transactions. If you’d like to learn more about how Ethereum mining works, these EthHub docs are a great start.

When a transaction is mined, two important things happen: the on-chain Ethereum state is changed via contract interactions, and Event Logs are published for public viewing. Once the Event Logs are published, we can execute JSON-RPC requests for eth_getLogs to investigate what changed, relative to the events that we care about, and react to them.

For example: an event ticketing service that wants to issue off-chain tickets based on crypto payments, could use eth_getLogs to find payments to their address, and react to these events by processing some logic in their backend servers to issue tickets to users.

In the above sample request, we use the parameters "from block" and "to block" to specify the hexadecimal block number that we are interested in retrieving logs from. Note that if this information is omitted, the method will return information from "block 0" to "block latest" by default (the entire chain history), and that’s not ideal. Infura has a cap on requests of 10,000 events per query. Best-practice is to request a single block, as we’ve done in this example, and do that for each mined block.

The response returned for this request is an array of events. In the example we’re using, only one event for one address matched the specified topics.

Topics are events emitted by smart contracts. If we take a look at the original DAI ERC20 Solidity contract again (0x6B175474E89094C44Da98b954EedeAC495271d0F), we can see two event signatures that could be associated with it:

How do we find out which topic (event) it actually was? You guessed it: we have to create the Function Selector of the Event and take the hash of it. Let’s try the event on line 94:

You might be wondering what the “data” provided in the request response means:

This completes our investigation!

View our developer documentation to explore different ways to interact with Infura to read and write Ethereum data.

Published at DZone with permission of Cheryl Douglass. See the original article here.