JavaScript is an integral part of any website. It is responsible for all its logic and data manipulation. It is the most popular language used to build websites. This extremely versatile language can be used for virtually anything. This does not necessarily mean that it will best suit all applications, but it will be able to compete with the leading languages in many respects. It is this versatility that makes it worth finding out about its underlying mechanisms and thus its strengths and drawbacks.

JavaScript is single-threaded, which means that only one action can be performed at a time. JavaScript uses a single thread to handle all requests, but when creating contexts, it uses other threads to handle input/output, so it does not get stuck. JavaScript can communicate between threads, using external interfaces that are able to create such other threads, it can communicate. For example, if you create a web page, it runs on a single thread but is able to communicate with other threads that work for some specific purpose. This is the case when using a camera. The camera is such a separate service for the browser and is a separate thread. And this is not happening on our thread but on an external one.

Let us explore the structures that go into the event loop.

A Web API from subsequent data structures that decide which elements are more important to execute in the browser. We have the main thread and the side threads, but at some point, we have to decide when to transfer the result to the main thread. And here we can decide if there are two things waiting for us at the same time, which of these things is more important.

We divide the queues into macro and micro tasks and a rendering queue. They contain function calls indicated as callbacks to asynchronous methods from the Web API. (setTimeout, setInterval, xhr, querySelector). The event loop executes tasks as long as it has such tasks to perform. First the micro, then the macro ones. In the case of rendering, the event loop processes what is in the queue and nothing else. If something comes along, it has to wait.

The three main elements of the event loop. EL is the queue of commands to be called. And it does not matter if they are synchronous or asynchronous, these are all actions that the user has performed and must be processed. They wait in a queue, each is taken in turn, in the order from which they came, and when they are collected, the decision is executed. If synchronous, it is executed at that time, the rest waits, and it goes into JavaScript. If asynchronous, its indicator is written to the memory chip, and its execution itself is delegated to the web APIs. The event loop forgets this; it just passes the message that this is asynchronous code and "do it for me, just give me the result." The event loop continually fetches things from the queue one by one. Things that are delegated to the web API are queued anyway, and this way, everything is done continuously, i.e., in a "loop." 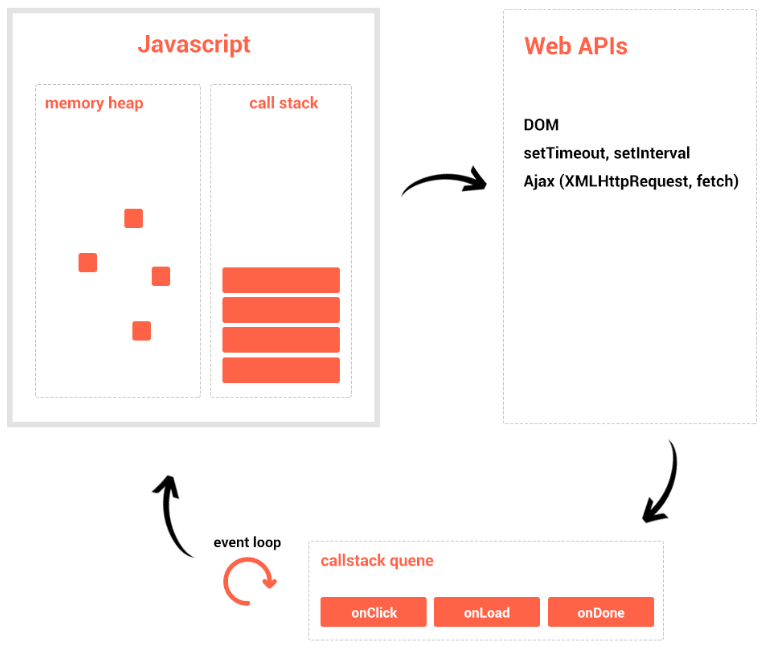 What Is the Event Loop?

JavaScript is a programming language that makes it possible to implement complex elements on a website so that the website can not only display static information but also handle content changes as appropriate, display interactive maps and animations of 2D/3D graphics, display video, and so on. Thanks to JS, you can take dynamic content creation on a website, control multimedia, animate images, and almost everything else.

The event loop determines the order in which the code will run. It brings the synchronous and asynchronous worlds together. If we do something in turn, we have access to it. If we delegate something, we would like to be able to keep the value from it later. For example, make a query to the server to retrieve data – not only do we want the data to be retrieved, but we also want to receive it. And since we have gone somewhere further with our code, we need to have some mechanism in place to pick up that data in the future.

Published at DZone with permission of Sebastian Z.. See the original article here.