For a majority of developers, the keyword final is a well-known concept when we talk about composing a Java class. In general, it forbids the overriding of classes and methods, as well as changes a variable that has been already initialized. However, this is only one part (and I think the smaller part) of the final keyword definition. The other part is the connection to JVM memory, and that's actually what this post is about!

I 'd like to discuss this topic further by providing some examples, but if you want to really dive deeper, then I recommend Chapter 17 from Java Language Specification. Let's dive right in!

Why Should I Bother Adding the Final Keyword?

I know that I'm not going to change the initialized value in my very small class, so why should care about this keyword; isn't it just blowing up my concise Java source file?

NO! There is other cool stuff from the final keyword.

And please, don't argue that you don't use threads in your application — it is very likely that you use a framework that actually does, just under the hood.

How I Actually Reason With Object Initialization

Let's step back a bit from the final keyword and demonstrate what object initialization might look like. It helps us understand where racing between threads may appear.

The picture above shows a small Java class and a description of how the initialization of that class could be done in reality. There is no concept of classes in a native language, which means the program needs to be expressed by instructions, one after another.

In this case, we can see that the object itself was created in the first line, and then, we populated the fields and published the reference to make it available and accessible. Everything looks fine, but there are several important considerations:

So far, so good, but why am I supposed to be scared when the behavior of my program cannot be changed?

The question is: How can we publish the shared object (a global variable) and be sure that all threads in our program will see the properly initialized object?

We already mentioned that the JVM or CPU is able to reorder everything and make your program faster. This means that we have to have some mechanism to inform the entire environment — please, don't optimize this part.

The JVM ensures that the second thread sees the state of the final field corresponding to the freeze action — no more, no less. 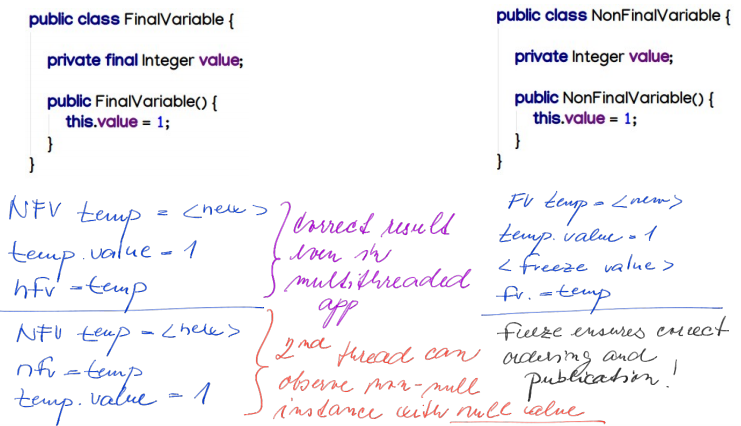 First, let's agree on how I described steps of the execution:

On the picture above, we can see a very simple example of what can go wrong. We've already mentioned exactly this case which fails because of reordering the linetemp.value = 1 after the object publication nfv = temp.

On the contrary, the example on the right side shows fully and properly exposed our object to all threads. Freeze ensures that there is no reordering, which means that the publication of our object can be executed only when our field is properly pushed to a memory where it can be shared with other threads (Main Memory, or shared via Cache Coherence). 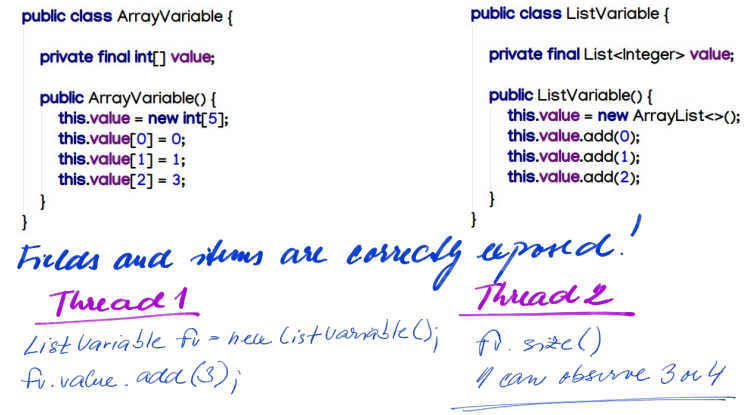 These examples show that the final field can help us correctly expose, even collections and arrays:

The  Composition class shows a simple fact: Even if an object with non-final fields is exposed using a final field, then the inner object itself becomes properly exposed. 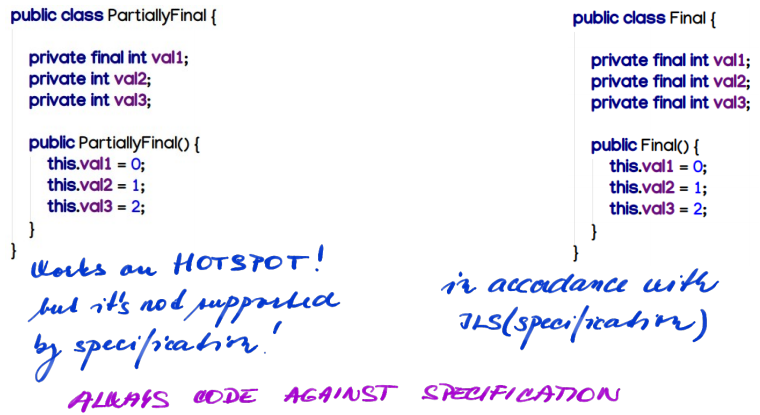 This example is very tricky. Don't count on the behavior of an implementation, always code against the specification!

OpenJDK Hotspot behaves in a way that even if only one field is marked as final, it ensures that the freeze action is added "at the end of our constructor," and flushing the CPU write buffers ensures that all other fields become visible to other threads. It works; you can check out other examples on my GitHub (link below) with JStress and give it a shot.

ConcurrentHashMap ensures that all values added to our Map are visible immediately to threads (internally synchronized).

However, it does not mean that the field holding the map, which is not marked as final, is visible to other threads after ConcurrentUtil construction. In this case, we can see the object with null value instead of initialized  ConcurrentHashMap.

What If I Cannot Use Final Fields...

We sometimes reach the situation where we are not able to modify a class and change all of its fields to final. So, is there any other way to expose the class properly with all the non-final fields?

We can use approaches that ensure we get safe publication for free:

Or, we can use some synchronization tools:

The java.util.concurrent package, which does not ensure that a non-final field itself will be properly visible, contains objects that are used by those classes and makes sure they are properly exposed and visible to other threads. The classes below passes the object from one thread to another via some internal memory barrier (e.g. unsafe, or volatile field) that means that the object, which is created and written to any structure below by Thread A and then is read by Thread B, is fully constructed even if the object contains non-final fields. 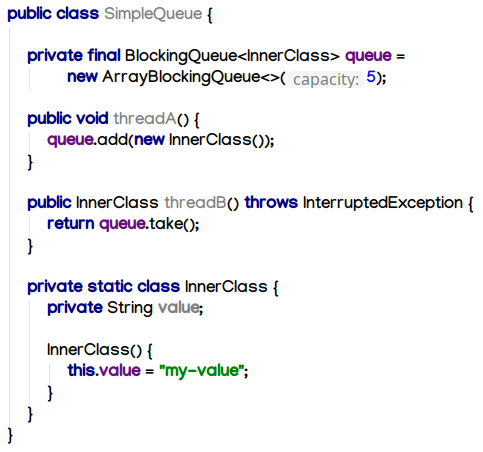 Thank you for reading my article and please leave comments below. If you would like to be notified about new posts, then start following me on Twitter: @p_bouda.