Both of my HoloLens apps in the store ask the user to identify some kind of horizontal space to put holograms on — in one case, Schiphol Airport, and in the other case, a map of some part of the world. Now you can, of course, use spatial understanding, which is awesome and offers very advanced capabilities but requires some initial activity by the user. Sometimes, you just want to identify the floor or some other horizontal place — if only to find out how long the user is. This the actual code I wrote for Walk the World and extracted for you. In the demo project, it displays a white plane at floor level.

We start with creating an empty project. Then, we proceed with importing the newest Mixed Reality Toolkit. If you have done that, you will notice the extra menu option HoloToolkit no longer appears, but it now says Mixed Reality Toolkit. It still has three settings, but one of them has profoundly changed: the setting Apply Mixed Reality Scene Settings basically adds everything you need to get started:

Now I tend to organize stuff a little bit different, so after I have set up the scene, I have this:

I make an empty game object HologramCollection that will hold my holograms, and all the standard or none-graphic I tend to chuck in a game object Managers. Notice I also added SpatialMapping. If you click the other two options in the Mixed Reality Toolkit/Configure menu, our basic app setup is now ready to go.

Some External Stuff to Get

Then, we proceed to import LeanTween and Mobile Power Ups Vol Free 1 from the Unity Store. Both are free. Note: The latter is deprecated, but the one arrow asset we need from it still is usable. If you can't get it from the store anymore, just nick it from my code!

We need some more stuff I wrote about before:

Setting Up the Initial Game Objects

The end result should be this:

HologramCollection has three objects in it: 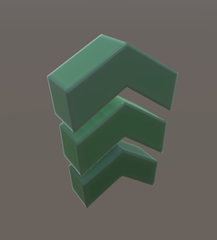 Inside the ArrowHolder, we place two more objects:

So let's start at the top setting up our objects. 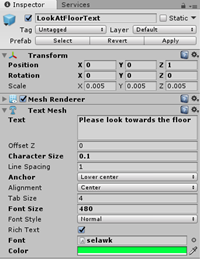 This is fairly easy. We scale it to 0.005 in all directions, enter the text "Please look towards the floor" in the text mesh, and set a couple of other parameters:

After that, we drag two components on it:

With the following settings: 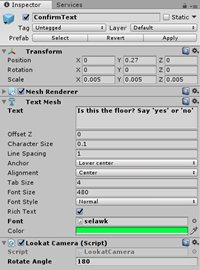 This will keep the text at a maximum distance of 2 meters, or closer if you are looking at an object that is nearer, it will move in 0.8 seconds to a new position, and with an angle of 180 degrees, it will always be readable to you.

This is hardly worth its own subparagraph, but for the sake of completeness, I'll show it's configuration. 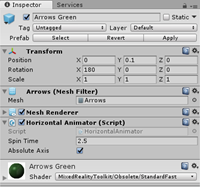 This is the object nicked from Mobile Power Ups Vol Free 1. 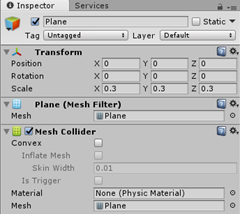 And now for some code.

Basically, there are two classes doing the work, the rest only is the support crew.

The message class is, of course, very simple:

With an enum to go with it indicating where in the process we are:

On startup, the FloorConfirmer hides its confirmation object (the arrow with text). FloorFinder shows it's prompt object. When it detects a floor, it sends the position in a PositionFoundMessage message with status "Unprocessed." It also listens to PositionFoundMessages. If it receives one that has status "Unprocessed" (which is, in this sample, only sent by itself), it will disable itself and hide the prompt object (the text saying "Please look at the floor").

If the FloorConfirmer receives a PositionFoundMessage of status unprocessed "Unprocessed," it will show it's confirmation object on the location where the floor is detected. And then, as I wrote, it waits for it's Accept or Reject method being called. If Accept is called, it resends the PositionFoundMessage with status "Accepted" to anyone who might be interested — in this app, that's a simple class ObjectDisplayer that shows a game object that has been assigned to it on the correct height below the user's head. If the Reject method is called, FloorConfirmer resend the message, as well — but with status Rejected, which will wake up the FloorFinder again.

This has three public properties: a prompt object (this becomes the text "please look towards the floor"), a maximum distance to try to find the floor, and the minimum height the floor should be below the user's head. These properties are set as displayed above.

The Update method does all the work — if a position on the spatial map is found that's at least MinHeight below the user's head, then we might have found the floor, and we send out a message (with default status Unprocessed). The method below Update, ProcessMessage, actually gets that message too and hides the prompt text.

The helper method GetPositionOnSpatialMap in LookingDirectionHelpers simply tries to project a point on the spatial map at the maximum distance along the viewing direction of the user. It's like drawing a line projecting from the user's head!

Is this the floor we want?

A rather simple class — it disables its confirmed object at startup. If it gets a PositionFoundMessage, two things might happen. If the Accept method is called from outside, it will resend the message with status Accepted for any interested listener and deactivate itself. If the reject method is called, it will send the message with status Rejected - effectively deactivating itself too, but waking up the floor finder again.

And thus these two objects, the FloorFinder and the FloorConfirmer, can work seamlessly together while having no knowledge of each other whatsoever.

For anything to happen after a PositionFoundMessage with status Accepted is sent, there need to also be something that actually receives it and acts upon it. I place the game object it's attached to the same vertical position as the point it received — that is, 5 cm above it. It's not advisable to do it at the exact vertical floor position, as stuff might disappear under the floor. I have found horizontal planes are never smooth or, indeed, actually horizontal. 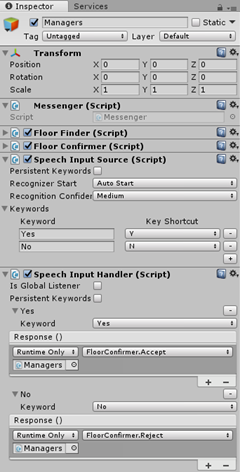 This script is dragged upon the plane that will appear on the floor.

FloorFinder and FloorConfirmer sit together in the Managers object, but there's more stuff in them to tie all the knots. 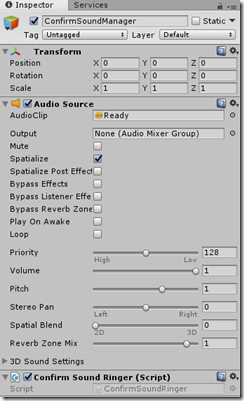 If you download the source code and run it, you might notice my trademark "pringggg" sound when the app does something. You might also have noticed various scripts sending ConfirmSoundMessage messages. In the Managers object, there's another game object called ConfirmSoundManager. It has an audio source and a ConfirmSoundRinger, that as you might expect is not too complicated.

And that's it. Simply stare at a place below your head (default at least 1 meter), say "yes," and the white plane will appear exactly on the ground. Or, as I explained, a little above it. Replace the plane with your object of choice and you are good to go, without using spatial understanding of complex code.

As usual, demo code can be found on GitHub.