in this part of the go microservices blog series , we’ll take on monitoring our microservices using prometheus and graphing our data using grafana .

(please note that this is not an in-depth blog post about all the capabilities and features of prometheus or grafana. there are better resources for that.)

the finished source can be cloned from github:

in recent years, prometheus has emerged as one of the major players in the open source space regarding the collection of metrics and monitoring data from (micro)services. at its heart, prometheus stores metric values at a given millisecond in time in a time series database, optionally with one or more labels.

in this tutorial, we’ll deploy some new services and applications.

here's the architectural overview of the monitoring solution: 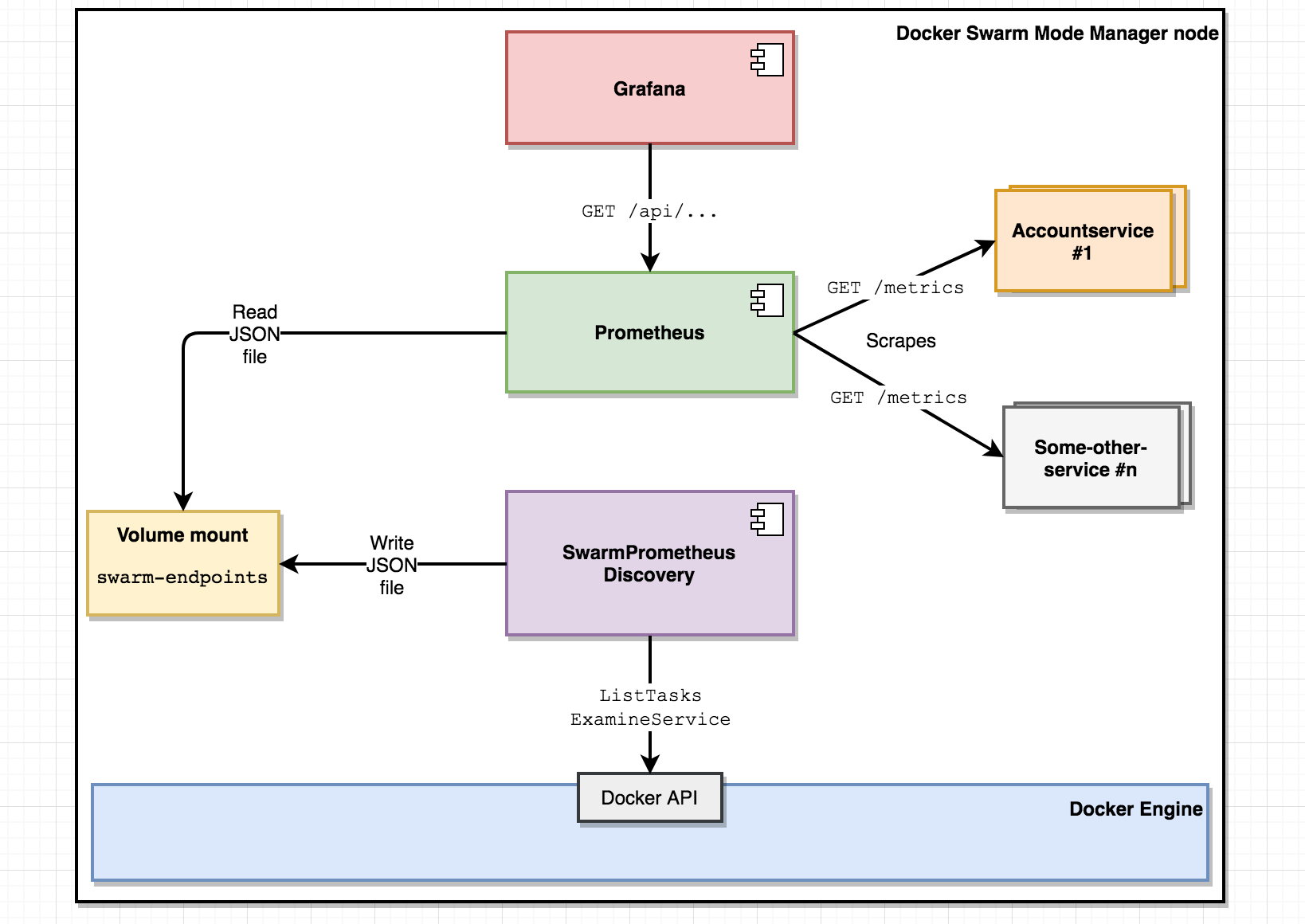 during the course of this post, we’ll accomplish the following:

prometheus is an open-source toolkit for monitoring and alerting based on an embedded times-series database, a query dsl and various mechanics for scraping metrics data off endpoints.

in practice, from our perspective that boils down to:

the prometheus server is written in go.

i strongly recommend this jworks blog post for in-depth information and explanations about prometheus concepts.

labels and metadata about a metric such as go_memstats_heap_alloc_bytes (as exposed by the go client library ) come with corresponding # help and # type metadata.

here’s an example summary metric from our lovely “accountservice” exposing the /accounts/{accountid} endpoint:

this summary metric captures the duration in seconds spent by each request, exposing this data as three quantiles (50th, 90th and 99th percentile) as well as total time spent and number of requests.

we’ll use the standard prom/prometheus docker image from docker hub with a custom configuration file.

if you’ve checked out p15 from git, enter the /support/prometheus directory where we have a sample dockerfile as well as the prometheus.yaml linked above.

to build and deploy prometheus with our custom config from the support/prometheus folder:

prometheus should now be up-and-running on port 9090 of your cluster.

please note that this is a non-persistent setup. in a real scenario, you’d want to set it up with requisite persistent storage.

how does prometheus know which endpoints to scrape for metric data? a vanilla install of prometheus will just scrape itself which isn’t that useful. luckily, scrape target discovery is highly configurable with built-in support for various container orchestrators, cloud providers, and configuration mechanisms.

however, discovery of containers in docker swarm mode is not one of the officially supported mechanisms, so we’ll use the file_sd_config discovery configuration option instead. file_sd_config provides a generic way of letting prometheus know which endpoints to scrape by reading a json file describing endpoints, ports, and labels. the path is configured in prometheus prometheus.yml config file, i.e: 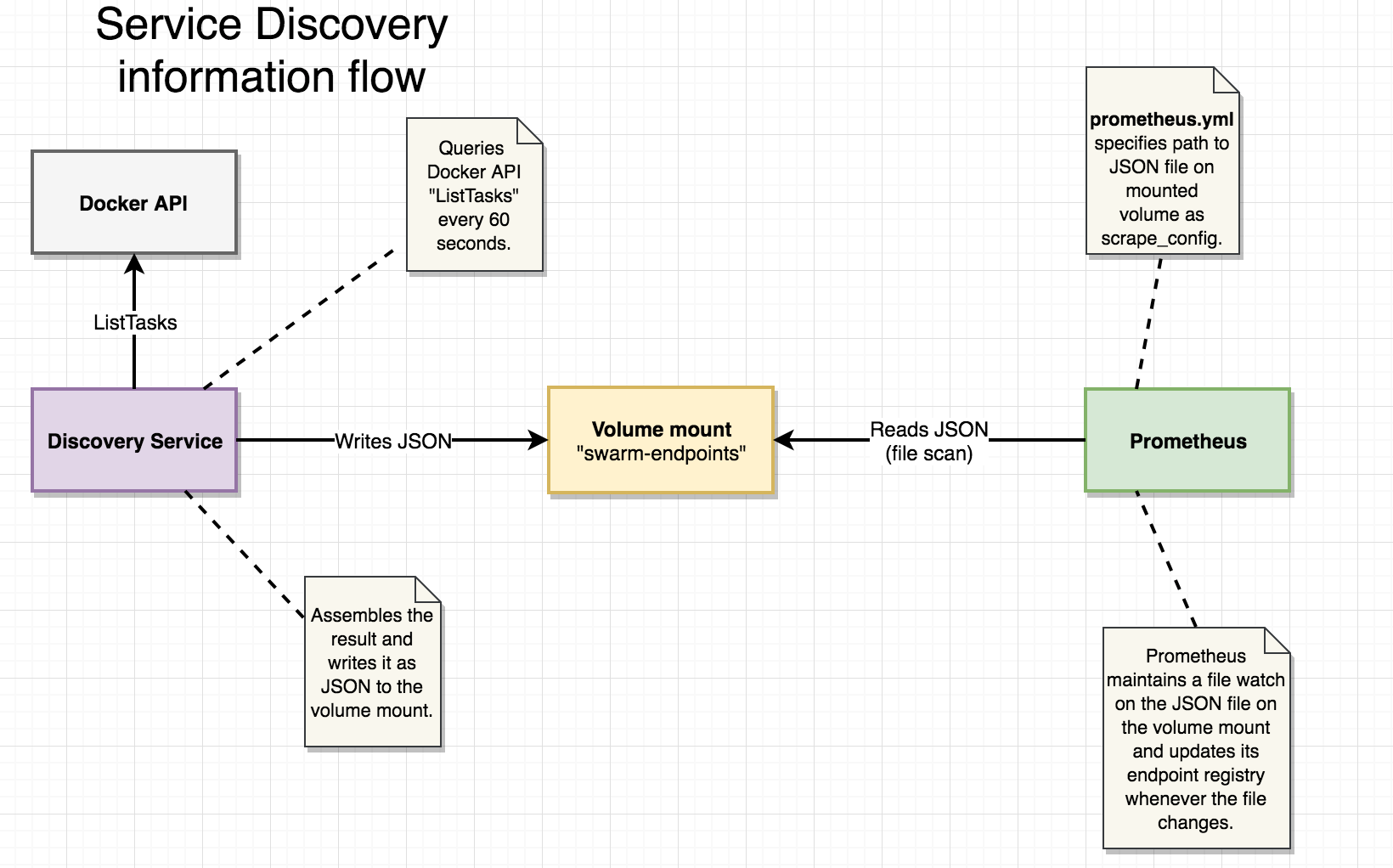 the json format is simple, consisting of a list of entries having one or more “targets” and a map of key-value “label” pairs:

this example shows our “accountservice” running two instances. remember that we cannot address the accountservice as a docker swarm mode “service” in this use-case since we want to scrape each running instance for its /metrics . aggregation can be handled using the query dsl of prometheus.

i decided to write a simple discovery application (in go of course!) to accomplish the task described above. it’s rather simple and fits into a single source file.

it does the following:

some key parts of the implementation:

quite straightforward — obtain a docker client, determine id of docker network we want to work on (more on that later) and start the goroutine that will re-write that json file every 15 seconds.

next, the polltasks function performs the actual work. it’s objective is to transform the response of the listtasks call from the docker api into json structured according to the file_sd_config format we saw earlier in section 3.1. we’re using a struct for this purpose:

the “targets” and “labels” are mapped into their expected lower-cased json names using json-tags.

next, the actual code that does most of the work. follow the comments.

yes, the function is a bit too long, but it should be relatively easy to make sense of it. a few notes:

there’s not much more to it than this. feel free to check out the complete source .

note that there already exists a similar (more capable) project on github for this purpose one could try as well.

when packaging our discovery microservice into a docker image, we use a very simple dockerfile:

note that we aren’t exposing any ports for inbound traffic since no one needs to ask the service anything. also note the -network and -ignoredservices arguments:

to easily build and deploy the discovery service to docker swarm, there’s a simple shell script whose content should be quite familiar by now:

the two mounts may use a bit extra explanation:

(if you’ve been following this series for a long time, you may notice that some of the route stuff has been moved into common which facilitates some long-overdue code reuse. )

the /metrics endpoint prometheus wants to scrape doesn’t appear by itself. we need to add a route at /metrics that specifies a http handler from the prometheus go client library:

note the new “false” argument. i’ve added it so we can control which endpoints of the microservice to apply prometheus middleware for (see next section).

in our “accountservice,” we have a number of restful http endpoints such as:

we should definitely add prometheus monitoring for the first three endpoints while monitoring the /health endpoint isn’t that interesting.

for a typical restful endpoint, we probably want to monitor number of requests and latencies for each request. as each data point is placed in a time series that should suffice for producing good metrics for api usage and performance.

to accomplish this, we want a summaryvec produced per endpoint. picking between summaries and histograms isn’t exactly easy, check this article for some more info.

capturing metrics is performed by injecting a go http.handler using the middleware pattern ( example ). we’re using the most simple option where we chain handlers together, i.e:

monitoring.buildsummaryvec() is a factory function in our /goblog/common library that creates an summaryvec instance and registers it with prometheus, see the code here . the go prometheus client api can be a bit complex imho, though you should be fine if you follow their examples .

the monitoring.withmonitoring() function is only invoked once when setting up the middleware chain. it will either return the next handler if the route being processed declares that it doesn’t want monitoring or the inlined http.handler function declared after the if-statement:

the implementation of our prometheus monitoring middleware that will be executed on each call:

to sum things up, we’ve done the following with the codebase of our “accountservice”:

4.4 verify that /metrics are available

to speed things up a bit, there’s a new shell script as.sh one can use to quickly rebuild and redeploy the “accountservice.”

out of the box, the go prometheus http handler provides us with a ton of go runtime statistics - memory usage, gc stats and cpu utilization. note that we need to call our /accounts/{accountid} endpoint at least one time to get data for that endpoint:

there they are! one can note the naming convention used, e.g: [namespace] [route name] *{[label1]=[“labelvalue1”],..}, we’ll get back to how these names and labels are used in the query dsl later in the prometheus or grafana gui:s.

if everything works out, we should now have an “accountservice” producing metrics which the prometheus server knows where to scrape. let’s open up the prometheus gui at http://192.168.99.100:9090 again and execute our first query. to get some data, i’ve run a simple script that calls the /accounts/{accountid} endpoint with 3 req/s.

we’ll do two simple prometheus queries and use the graphing functionality in prometheus server to display the result.

we’ll start with just counting the total number of requests. we’ll do this by the following query: 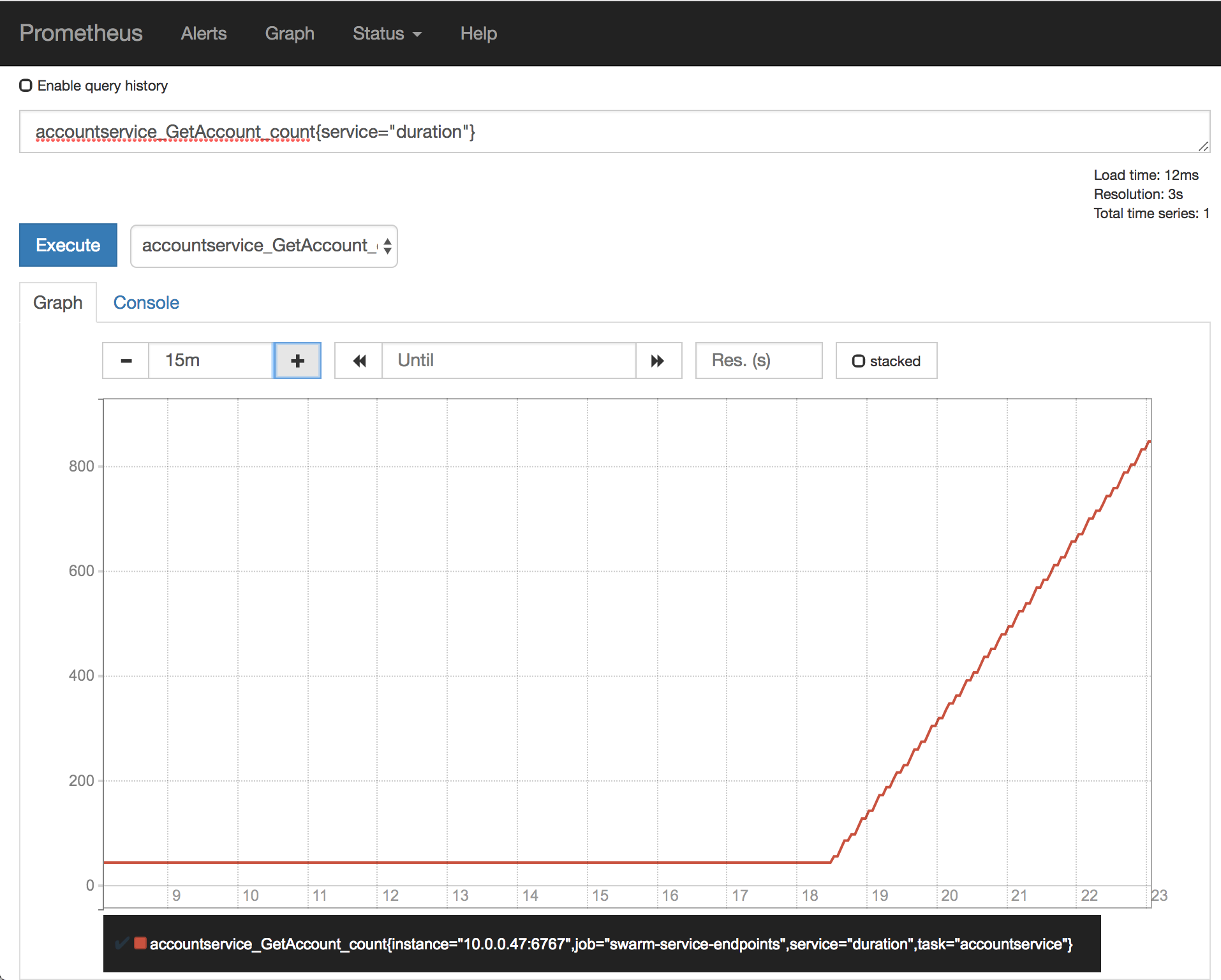 let’s enter the following into the query field, where we select all quantiles for the “accountservice_getaccount” having the “duration” label. we multiply the result by 1000 to convert from seconds into milliseconds. 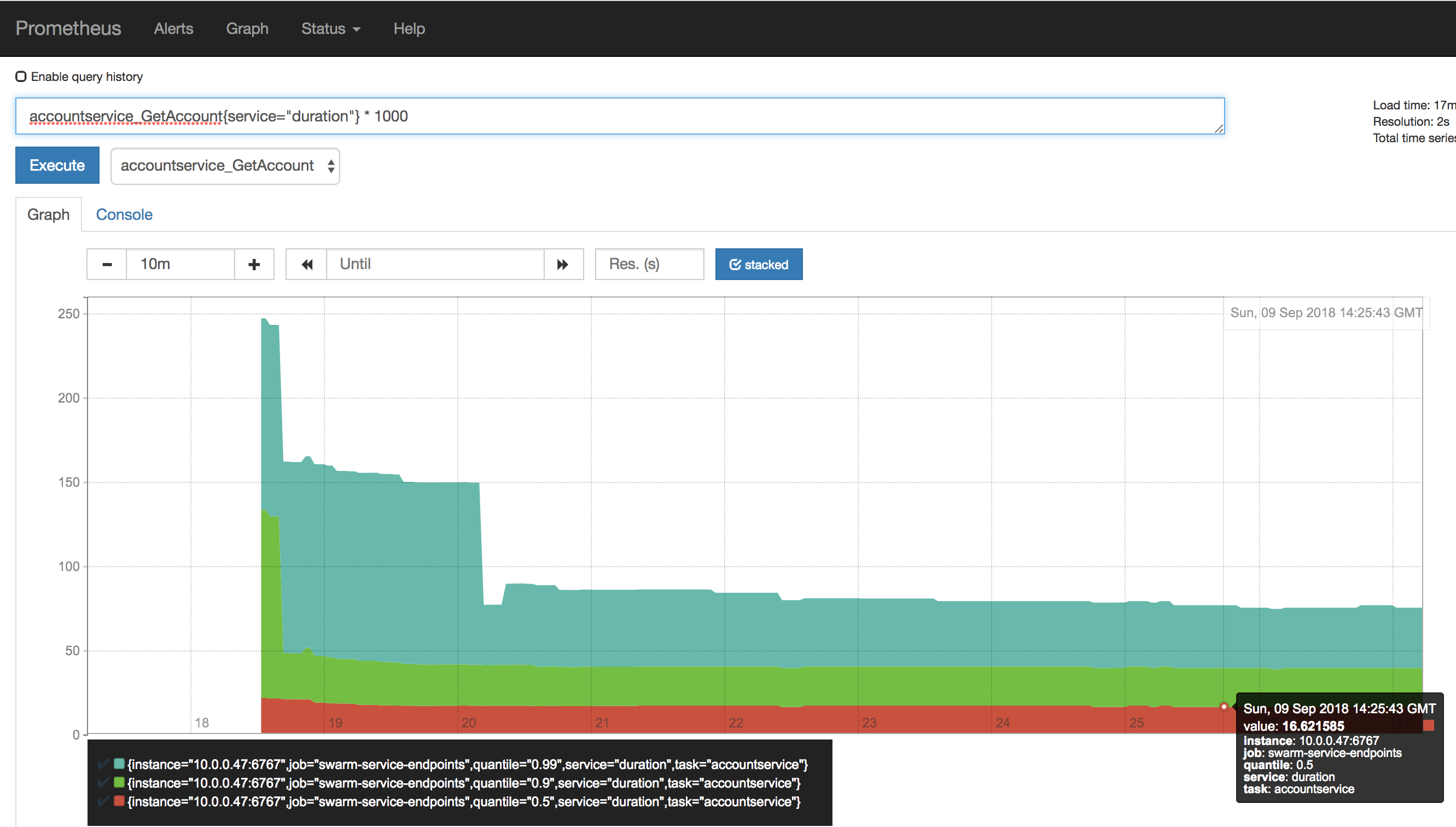 i’ve selected the “stacked” visualization option and it’s quite easy to see that our 50th percentile (e.g. avg) sits at about 16ms while the 99th percentile duration is approx 80 ms.

the prometheus gui can do more, but for more eye-appealing visualizations we’ll continue by getting grafana up and running and configured to use our prometheus server as the datasource.

grafana is a platform for visualization and analytics of time series data. it’s used for many purposes, visualization of prometheus metrics is just one of many and fully describing the capabilities of grafana is definitely out of the scope of this blog post.

we’ll do the following:

6.1 running grafana in our cluster

for the purpose of this blog post, we’ll run grafana without persistence etc which makes it a breeze to set up: 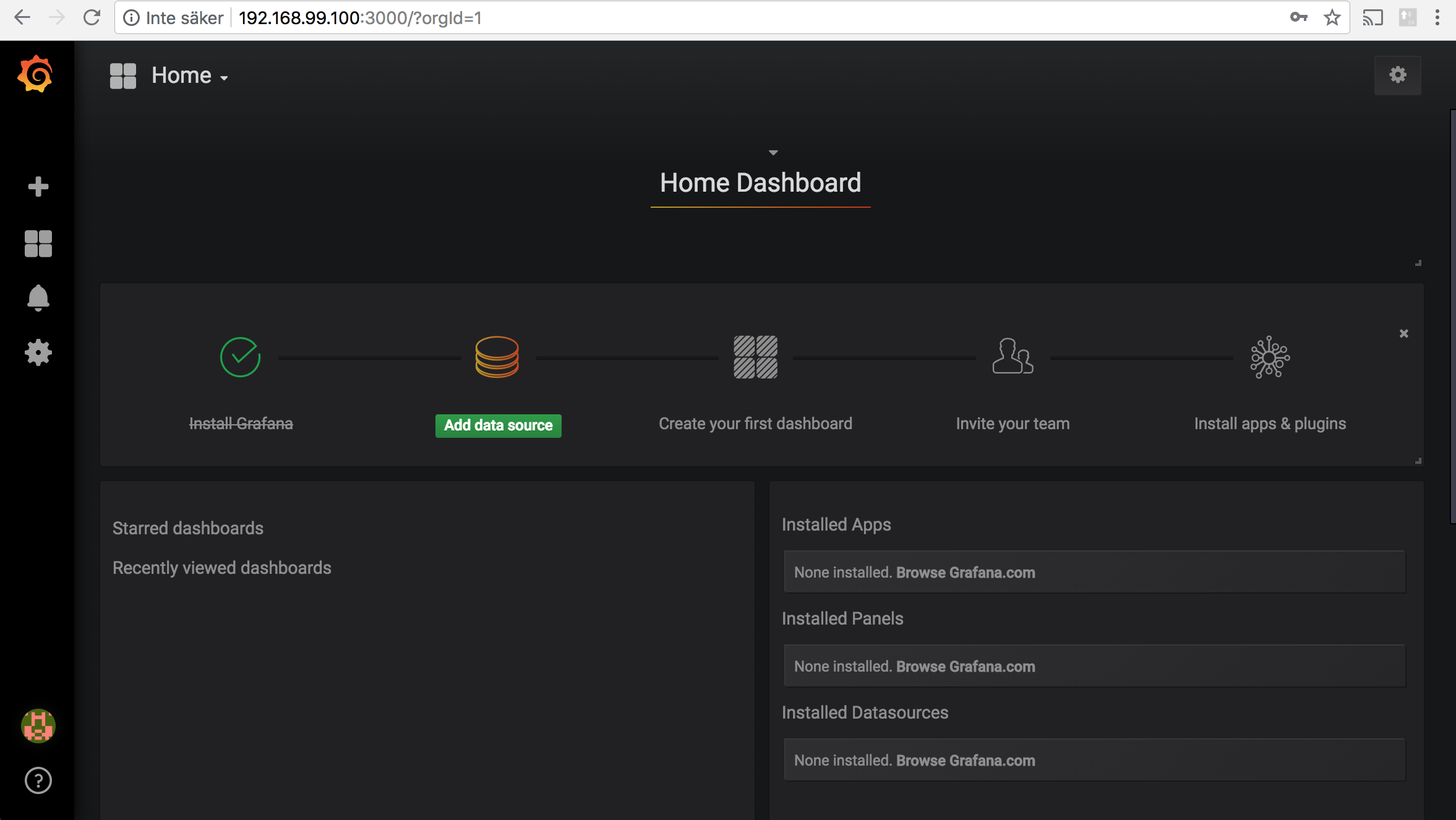 note that we’re running grafana without any persistent storage. in a real setup, you’d set it up properly so your user(s) and reports survive a cluster restart!

6.2 add prometheus as a datasource

click the “add datasource” button and enter http://192.168.99.100:9090 as server url. note that we’ll using “browser” access which means that grafana will communicate with the prometheus server through your browser as a proxy. it sort-of works using server-mode with http://prometheus:9090 as url (which is how it should be done), but i keep getting issues with queries just refusing to complete so i’d recommend using browser-mode when just trying things out.

6.3 create a dashboard using our datasource

click the plus (+) button in the upper-left and then select “graph” as panel type. next, click the chevron on “panel title” and select “edit” in the drop-down menu. you should see something such as: 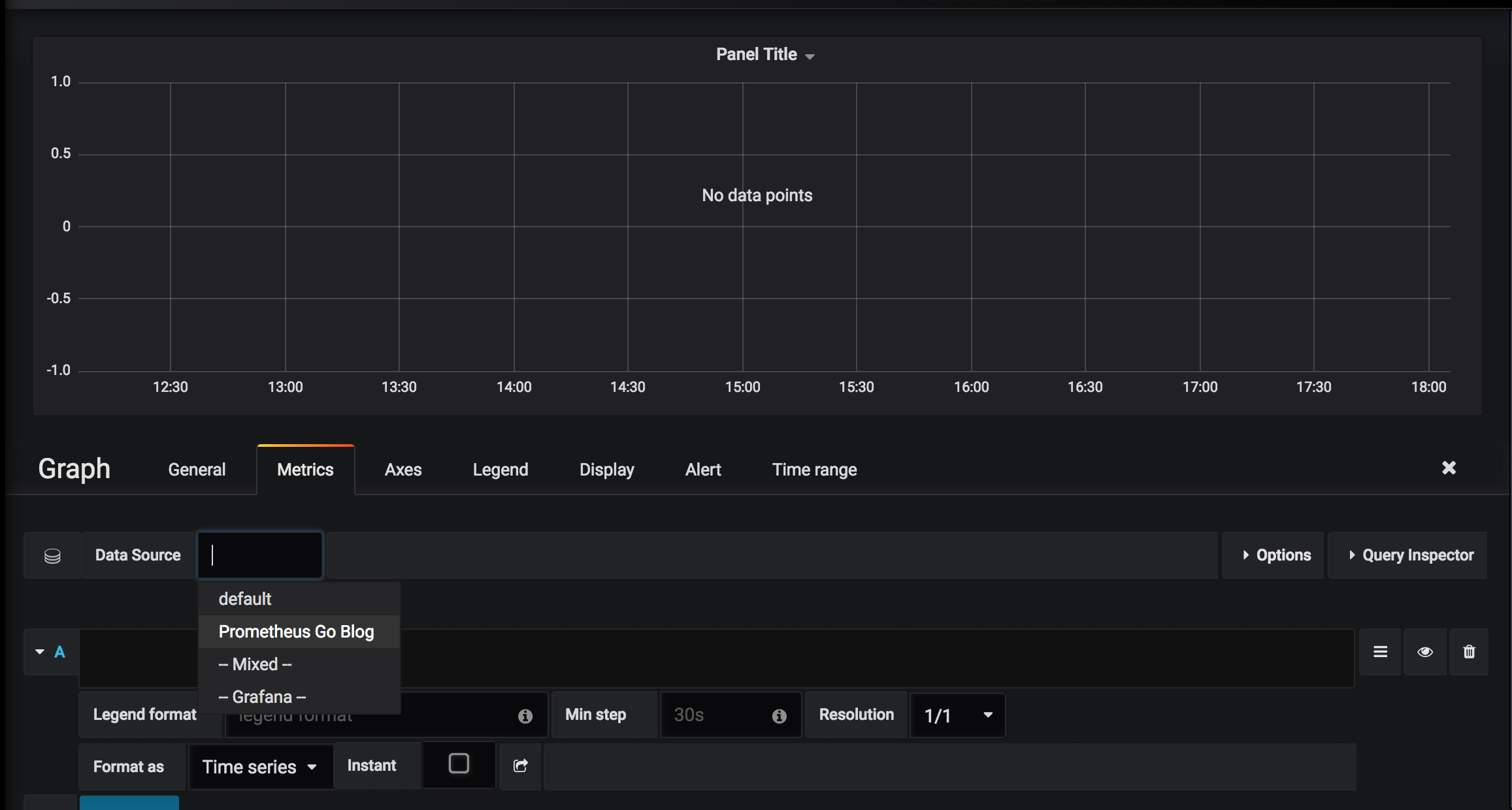 as you can see, you should select our “prometheus go” datasource from the data source drop-down. we should now be able to write our first query, using the same query language as we used in section 5.

if you start typing in the query field, you’ll get code-completion to help you get started. in the image below, i’ve typed “acc” which immediately results in a number of things we could add to our dashboard.

grafana is very powerful with an overwhelming amount of options and capabilities for creating graphs, dashboards, and analytics. there are people and blogs better suited to digging into exquisite details and graph skills, so i’ll settle for describing the queries used for creating a dashboard with two panels. both show the system running three instances of the “accountservice” under a light load.

for the average latencies, we’ll use the following query:

the avg_over_time() function allows us to specify the time window during which we want to aggregate values in the time series, one minute in this case. to get the average, we’re dividing the sum of latencies by the count which gets us the average, finally multiplying by 1000 to get the result in milliseconds instead of fractions of a second.

due to the broken y-axis the results seem to fluctuate a lot, but is actually within approx 16-19 ms.

memory utilization is a classic metric in the world of monitoring. the default http.handler from prometheus automatically exposes this as a gauge metric we can use in a grafana dashboard. the query looks like this:

we see our three instances of the “accountservice” hovering around the 5mb mark.

as previously stated, grafana offers great possibilities for visualizing and analyzing monitoring data exposed by the equally capable prometheus ecosystem, whose finer details is out of scope for this post.

in this part of the series, we’ve finally added monitoring, where prometheus (go client lib + server) and grafana was our stack of choice. we’ve accomplished the following:

in the next part, i hope i can finally do something on the huge topic of security.