A few years ago, Hadoop was touted as the replacement for the data warehouse which is clearly nonsense. This article is intended to provide an objective summary of the features and drawbacks of Hadoop/HDFS as an analytics platform and compare these to the cloud-based Snowflake data warehouse.

First developed by Doug Cutting at Yahoo! and then made open source from 2012 onwards, Hadoop gained considerable traction as a possible replacement for analytic workloads (data warehouse applications), on expensive MPP appliances.

Although in some ways similar to a database, Hadoop Distributed File System (HDFS), is not a database with the corresponding workload, read consistency, and concurrency management systems. While Hadoop has many similarities to an MPP database including its multi-node scalability, its support for columnar data format, use of SQL, and basic workflow management, there are many differences which include:

The diagram below illustrates the key components in a Hadoop/HDFS platform. It illustrates how a Name Node is configured to record the physical location of data distributed across a cluster.

While this delivers excellent performance on massive (multi-terabyte) batch processing queries, the diagram below illustrates why it’s a poor solution for general purpose data management.

The diagram above illustrates how the Service Layer manages concurrency, workload and transaction management. Unlike the Hadoop solution, on Snowflake data storage is kept entirely separate from compute processing which means it’s possible to dynamically increase or reduce cluster size.

The above solution also supports built-in caching layers at the Virtual Warehouse and Services layer. This makes Snowflake a suitable platform for a huge range of query processing, from petabyte scale data processing, to sub-second query performance on dashboards.

The table below provides a simple side-by-side comparison of the key features of Hadoop and Snowflake: 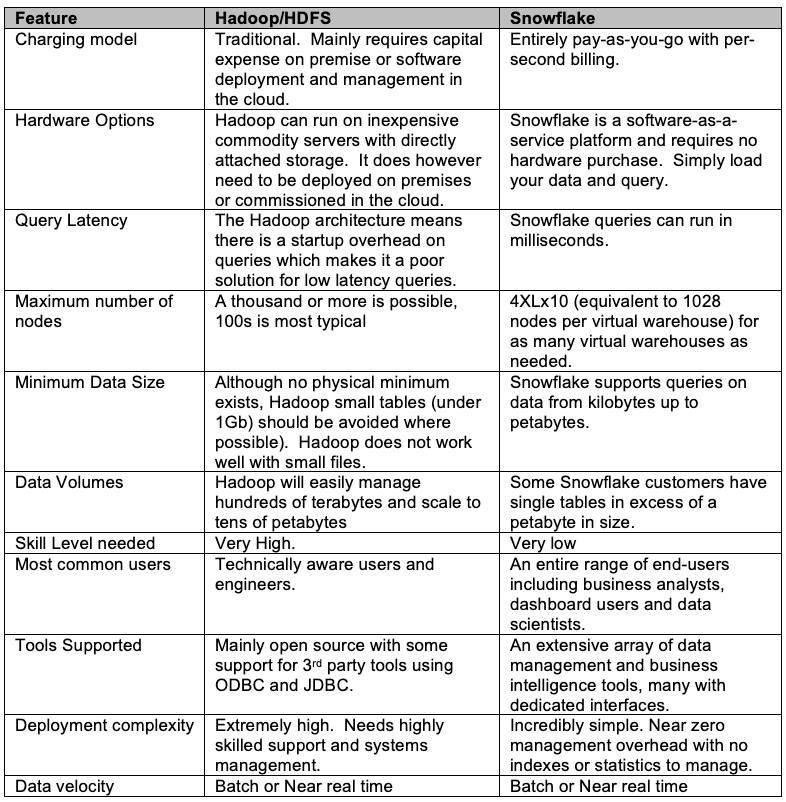 "Most of those who expected Hadoop to replace their enterprise data warehouse have been greatly disappointed."  James Serra

The primary advantage posited by Hadoop was the ability to manage structured, semi-structured (JSON), and unstructured text with support for schema-on-read. This meant it was possible to simply load and query data without concern for structure.

While Hadoop is certainly the only platform for video, sound, and free text processing, this is a tiny proportion of data processing, and Snowflake has full native support for JSON, and even supports both structured and semi-structured queries from within SQL.

Having failed to capture significant MPP database market share, Hadoop is being touted as the recommend platform for a Data Lake – an immutable data store of raw business data. While this may be a suitable platform to repurpose an existing Hadoop cluster, it does have the same drawbacks of MPP solutions, in potentially over-provisioning compute resources as each node adds both compute and storage capacity. It’s arguable that a cloud-based object data store (eg. Microsoft Blob Store or Amazon S3) is a better basis for a data lake, making use of the separation of compute and storage to avoid over-provisioning. However, with the Snowflake support for real-time data ingestion and native JSON support, this is an even better platform for the data lake.

Where perhaps Hadoop does have a viable future is in the area of real-time data capture and processing, using Apache Kafka and Spark, Storm or Flink, although the target destination should almost certainly be a database, and Snowflake is the clear winner in data warehousing.

As a replacement for an MPP database, however, Hadoop falls well short of the required performance, query optimization, and low latency required, and Snowflake stands out as the best datawarehouse platform on the market today.

Disclaimer: The opinions expressed in my articles are my own, and will not necessarily reflect those of my employer (past or present) or indeed any client I have worked with.

This article was first published on Analytics.Today at: Hadoop Vs Snowflake.