There are several ways to perform integrations with existing platforms in the healthcare industry. MuleSoft provides a stable connector that we can use to transform and use without any hustle: the HL7 EDI connector.

HL7 payload is utilized whenever the healthcare process needs to be moved among different platforms or various healthcare providers. Such messages are shared in response to motivating events attached with separate notifications, such as when a patient is being accepted into a hospital or while individuals are being released. Every HL7 message includes various components in a precise series and brings some method to decode.

Individual HL7 notifications contain one or several pieces, which create additional strings of text. A carriage retrieval symbol, (\r)), divides individual segments from the next segment. Distance comprises areas that are isolated by the pipe "|" character. Separate fields may hold additional sub-fields which are isolated by the "^" character. The HL7 message encloses a payload type, present by a three-character principle, which reveals why the statement is standing dispatched, and also, which starts an event. The MSH-9 field of the payload has both the message variety along with stimulus event. To illustrate, in an HL7 statement such as ADT-A01, the section ADT is the HL7 payload sort, and A01 is the trigger event.

Three are several kinds of HL7 payloads. Every message has a unique proposal and payload scope. Individual statement structure in HL7 has a detailed principle of three characters and administers to possess an occurrence. While there are multiple messaging structures in HL7, the considerable standard comprises ACK (General Acknowledgment), such as hospital investigation outcomes and imaging information, from the producing procedure.

SIU: The schedule information payload class is used to create, modify, and delete patient appointments and has 14 different trigger events.

It provides three actions to perform with HL7 message and works on TCP/IP protocol.

There are several free and paid tools that can be used to generate requests or messages to test the scenarios with MuleSoft MLLP connectors. Each tool segregates the message structure so that it can be understood easily. Find an example below: 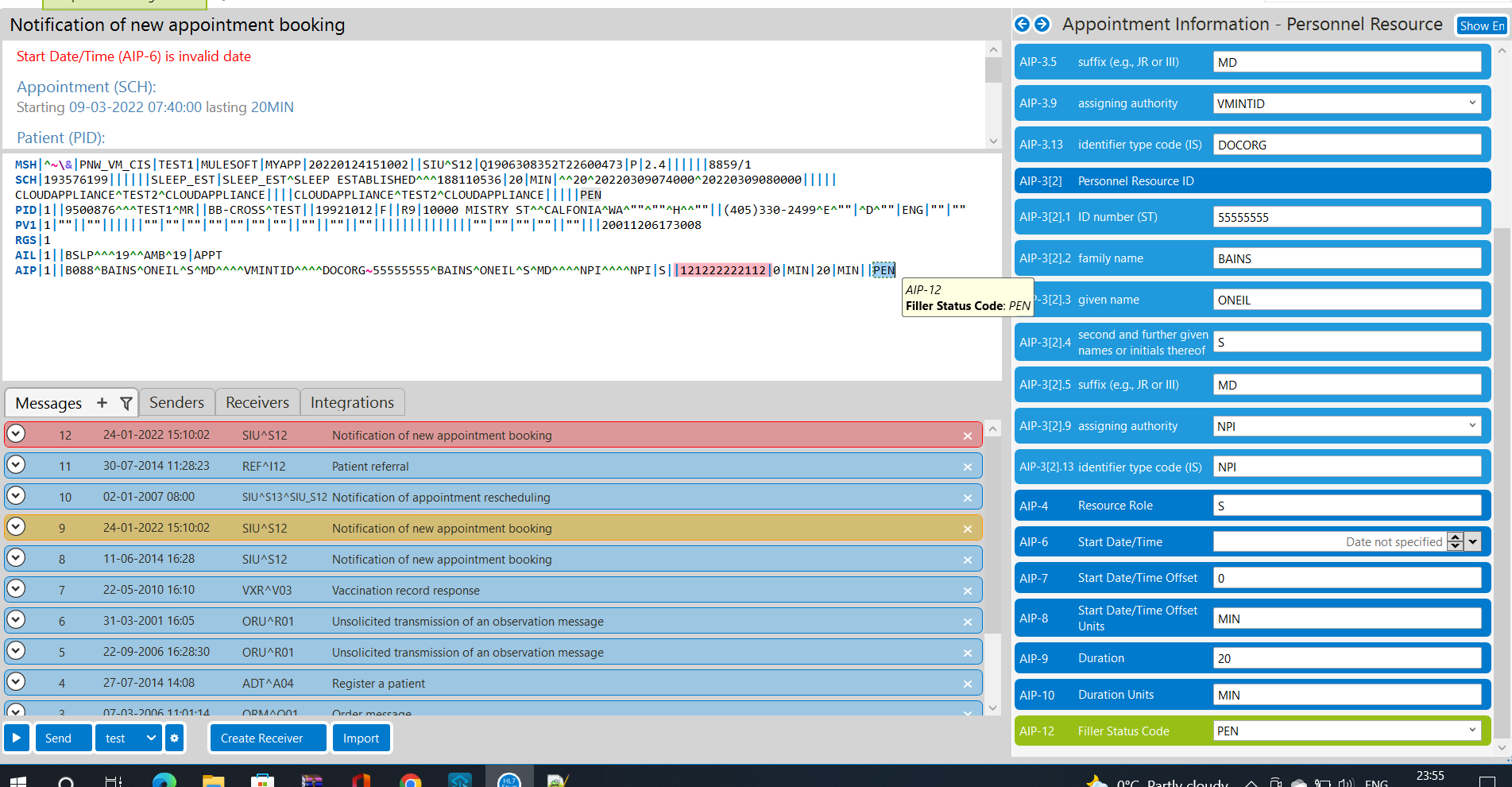 Find the default configuration below: 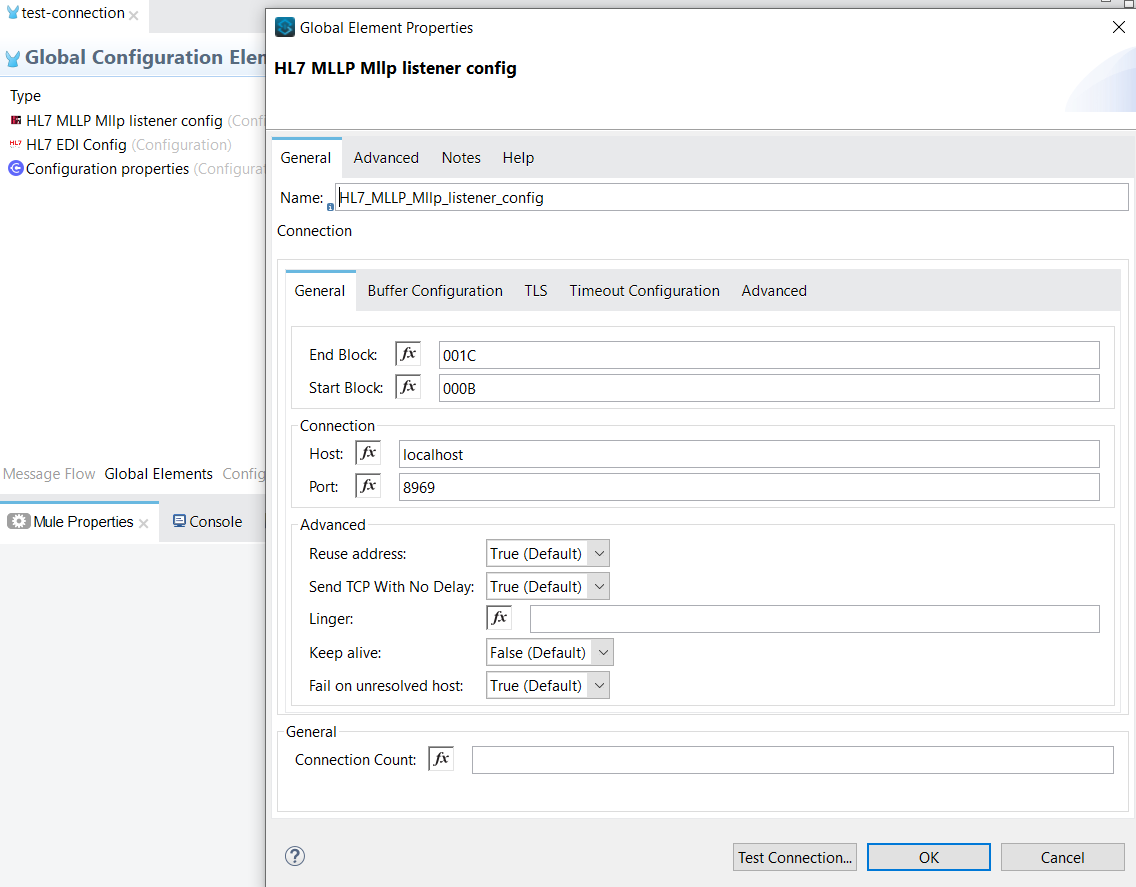 MuleSoft provided a complete structure of .esl file which consists of element validation. 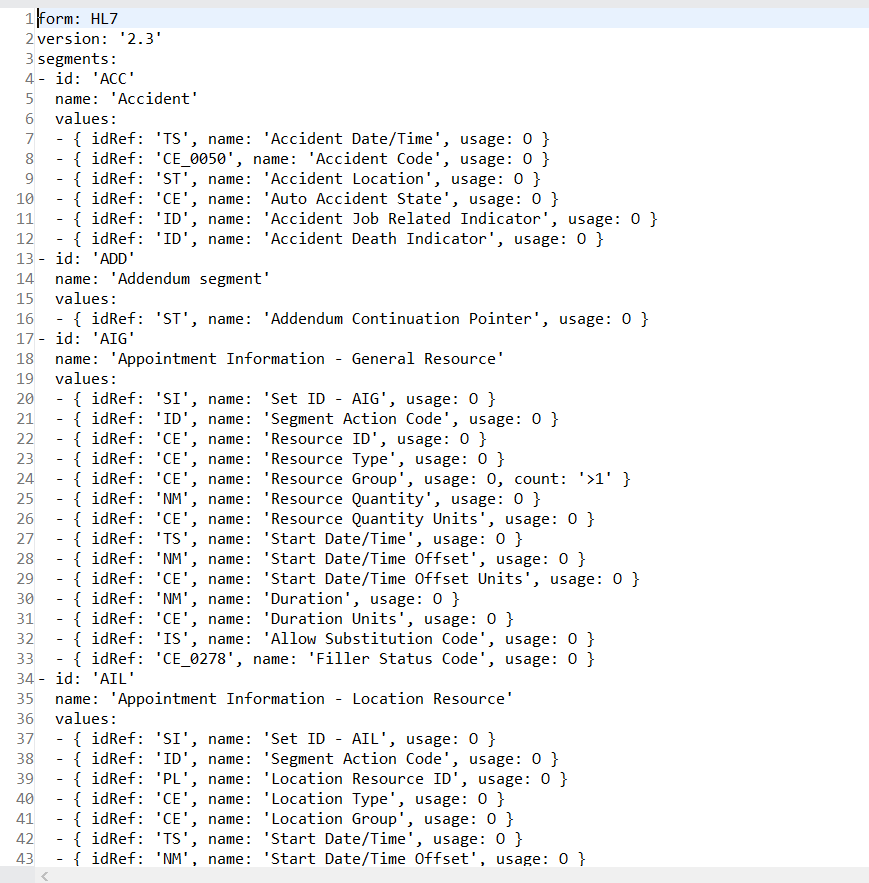 Project/action specific message validation file which inherits the above global structure to evaluate the incoming message:

To send acknowledgment, we use the "write" - "HL7 EDI" connector to send ACK to sender about the message.

Payload is divided into segments to perform business logic in the flow:

Not that an ACK message should be defined based on the agreement with the sender to identify a smooth exchange of communication amount sender and receiver. Below, find a sample ACK message based on message validation.

This is for any error scenario that occurred. For instance, element validation failed based on the definition of the project.

The message and its structure are as expected.

For more details about connectors, check out MLLP connector examples.