This document discusses having a common security framework to protect our REST APIs against different types of attacks, e.g. OWASP top 10 threats, unauthorized access, denial of service attacks, masking confidential data, etc., and at the same time, also ensure that APIs cater to the needs of an omni-channel experience.

Before we jump into the security, we need to understand few basic concepts about clients and API types, explained below:

Clients typically are a chunk of code that application developers can add to their development projects to do the basic things an application needs to do in order to interact with the API. Clients are categorized into two types:

Confidential clients are capable of maintaining the confidentiality of their credentials (e.g., client implemented on a secure server with restricted access to the client credentials), or capable of securing client authentication using other means.

Public clients are incapable of maintaining the confidentiality of their credentials (e.g., clients executing on the device used by the resource owner, such as an installed native application or a web browser-based application), and are incapable of secure client authentication via any other means.

APIs are categorized into two categories:

Organizations expose their information to be available to public/third parties which do not have any direct relationship with their business.

Public APIs are further categorized into two categories based on their access and the data they represent:

These APIs facilitate communication and integration between an organization and its business partners, e.g. credit card organization exposing APIs for Uber to pay via loyalty points credited and available in a user’s credit card.

Strictly for use within an organization for integration between applications and systems used by the organization, e.g. an organization developing APIs to fill timecards for employees and make the feature available on their company mobile app.

API security involves securing data end to end, which includes security, from a request originating at the client, passing through networks, reaching the server/backend, the response being prepared and sent by the server/backend, the response being communicated across networks, and finally, reaching the client. Therefore, API security has been broadly categorized into four different categories, described below and discussed in depth in the subsequent sections:

The below diagram depicts the above categories and various ways to secure them end to end: 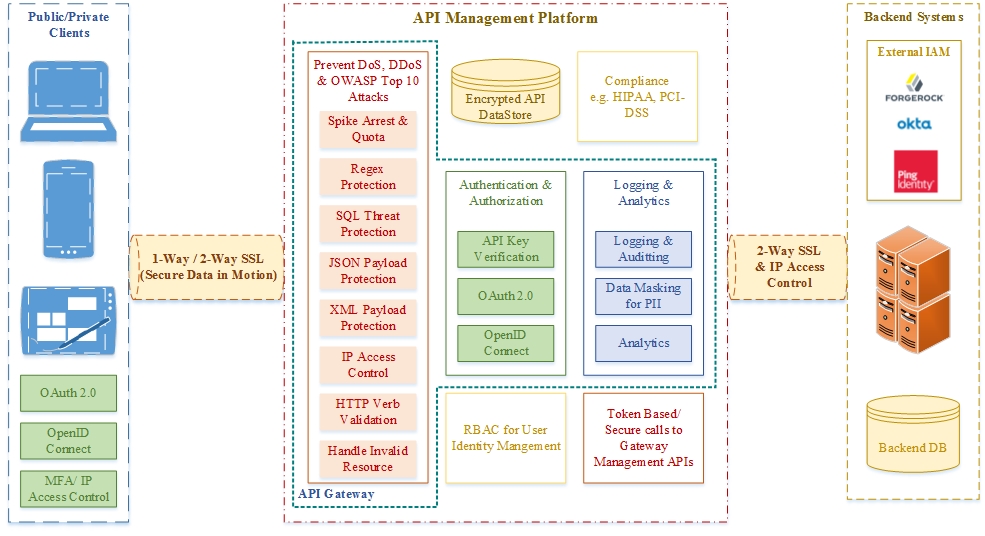 Data in Transit/Data in Motion Security

For all except public unprotected API implementations, the use of TLS should be a MUST HAVE requirement. Also, the overhead of TLS is negligible on modern hardware, with a minor latency increase that is more than compensated for by safety for the end user. Key considerations are:

Access Control and Security Against Denial of Service (DoS) Attacks

Generally, authentication and authorization are used in sync.

In the API world, OAuth and OpenID Connect are the most commonly used mechanisms to secure API endpoints by leveraging the existing IAM infrastructure instead of building a separate system every time to store the username and password. Both the protocols authenticate users against existing the IAM system to exchange for an access token, which is further used to access the API resources.

The OAuth 2.0 authorization framework enables a third-party application to obtain limited access to an HTTP service. If you're storing protected data on your users' behalf, they shouldn't be spreading their passwords around the web to get access to it. Use OAuth to give your users access to their data while protecting their account credentials.

Opaque Token: Many OAuth 2.0 implementations return OPAQUE strings in exchange for user credentials also called as Access Tokens. These tokens are further used to access API resources. These Opaque tokens are literally what they sound like. Instead of storing user identity and claims in the token, the opaque token is simply a primary key that references a database entry which has the data. Fast key-value stores like Redis, NoSQL databases like Cassandra are perfect for leveraging in-memory hash tables for I/O lookup of the payload. Since the roles are read from a database directly, roles can be changed and the user will see the new roles as soon as the changes propagate through the backend.

JSON Web Token:  A JWT Token is actually a full JSON Object that has been base64 encoded and then signed with either a symmetric shared key or using a public/private key pair. The JWT can contain information like the subject or user_id, when the token was issued, and when it expires. By signing with a secret, it is ensured that only system having access to secret can generate the token. One thing to keep in mind though, while the JWT is signed, JWTs are usually not encrypted (although you can encrypt it optionally). This means any data that is in the token can be read by anyone who has access to the token. Therefore it is good practice to place identifiers in the token such as a user_id, but not personally identifiable information like an email or social security number. Also, they should be passed over an encrypted channel using TLS.

JWT Limitations: Banning users or adding/removing roles is a little harder as it does not immediately reflect. Remember, the JWT has a predefined expiration date which may be set a week into the future. Since the token is stored client side, there is no way to directly invalidate the token even if the user against which JWT is issued is marked as disabled in the database. Rather, you must wait until it expires. This can influence your architecture especially if designing a public API that could be starved by one power user or an e-commerce app where fraudulent users need to be banned.

Though there are workarounds, for example, if all you care is banning compromised tokens or users, you can have a blacklist of tokens or user_ids, but this may reintroduce a database back into your auth framework. A recommended way to blacklist is to ensure each token has a JTI claim (or a JWT Id which can be stored in the DB). Assuming that the number of tokens you would like to invalidate is much smaller than the number of users in your application, this may scale pretty easily. 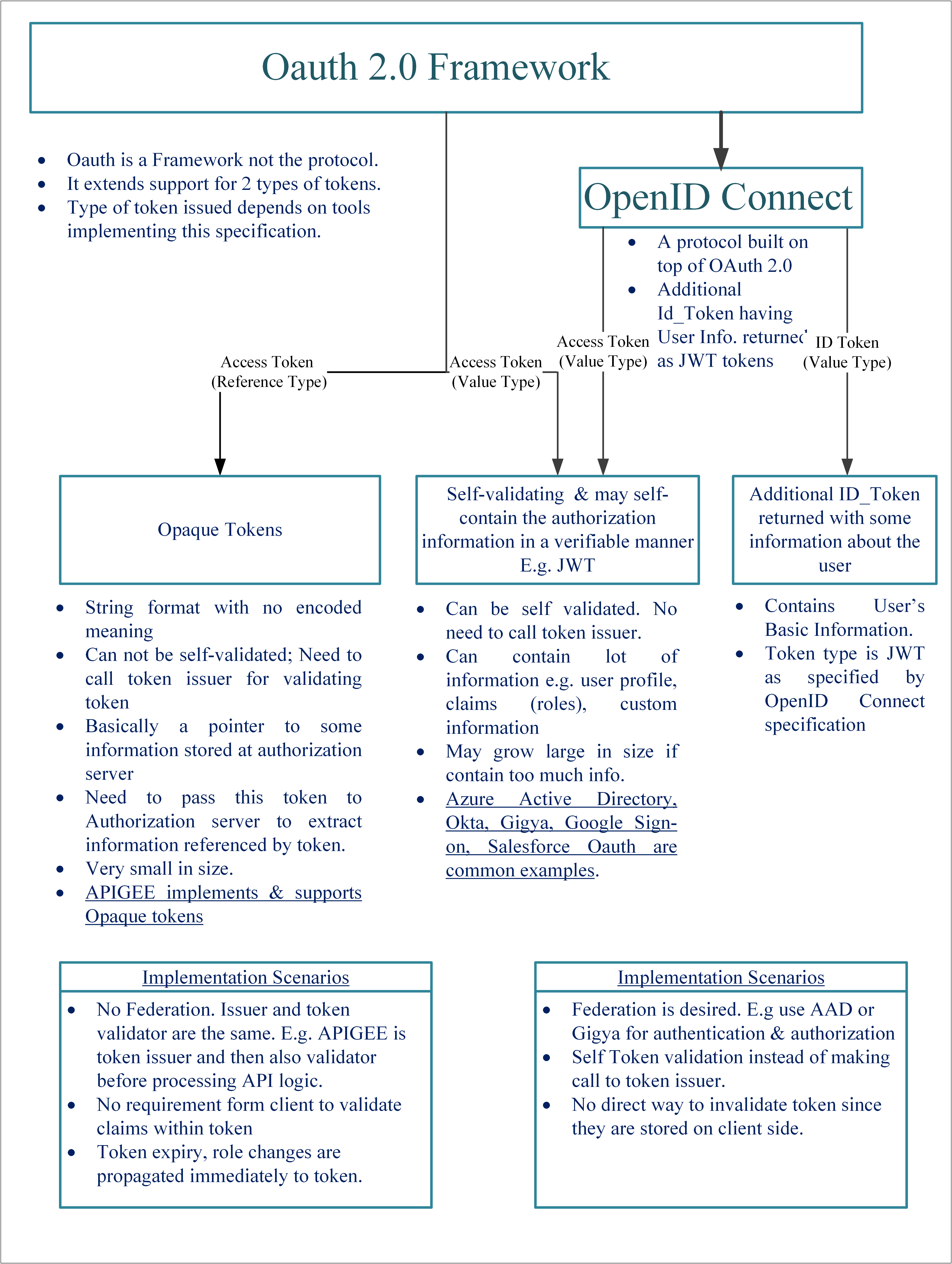 For an enterprise app with many roles such as admin, project owner, service account manager, switching user roles may not have the immediate effect on JWTs. Especially, think of the case where an admin is modifying someone else's authorized roles such as his/her immediate reports. Thus, the modified user doesn't even know his/her roles have changed without refreshing the JWT

Mentioned below are certain use cases to implement OpenIDconnect:

Both OAuth and OpenIDConnect support four grant types specified by OAuth 2 specification and the below diagram depicts scenarios for selecting a specific grant type using a flow chart. The diagram tries to generalize the scenarios but does not restricts/enforces to go with specific grant type as depicted in the flowchart. API developers might opt to go with different grant type based on constraints/implementation scenarios as required by the project. 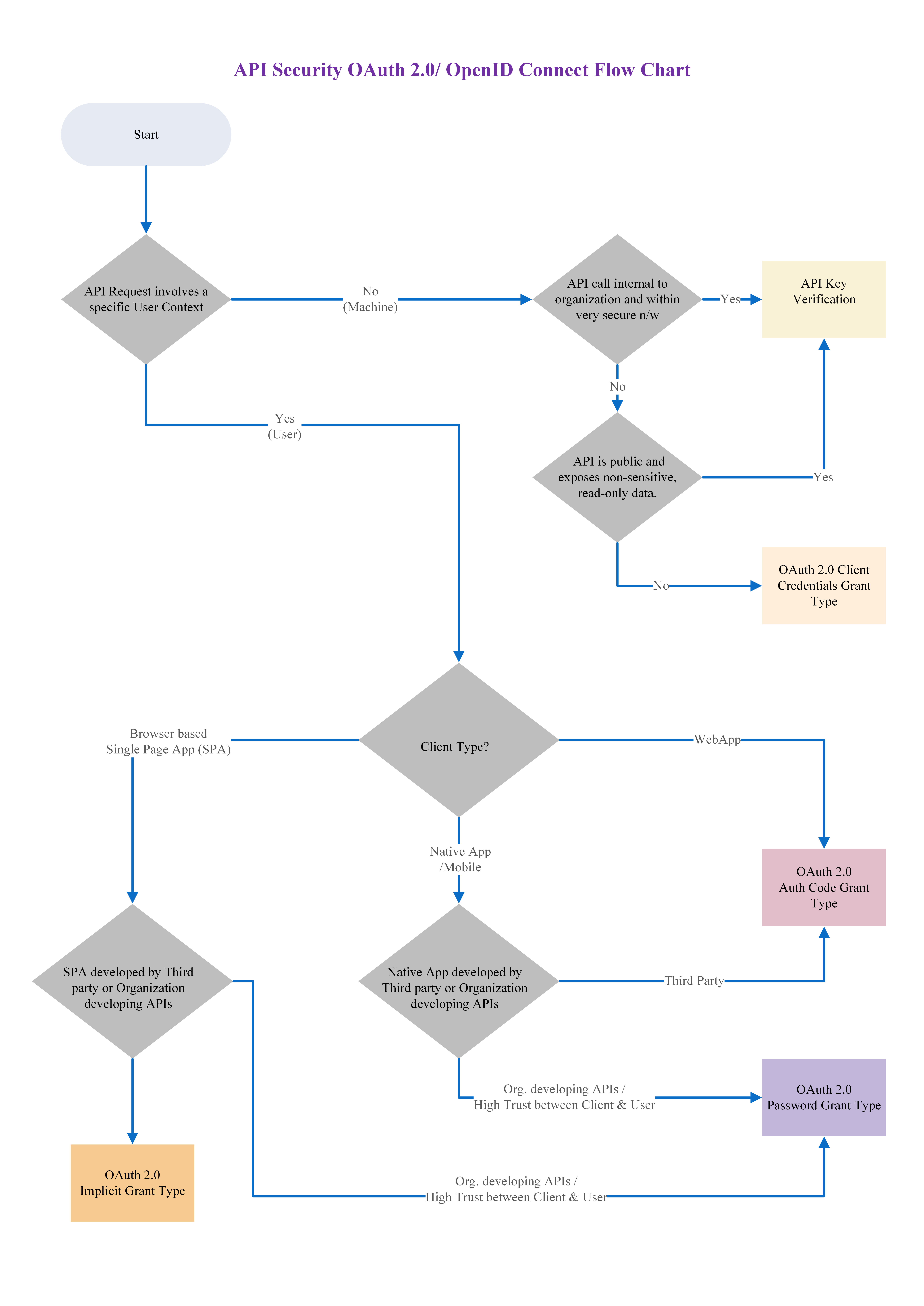 Passwords, security tokens, and API keys should not appear in the URL, as this can be captured in web server logs, which makes them intrinsically valuable. Also, personally identifiable information like Userid, password, account numbers, credit card numbers, etc. should be masked everywhere, including transaction and audit logs.

Public APIs meant to expose data which is non-sensitive and read-only in nature (e.g. Weather APIs) and do not wish to add any user authentication/authorization (since the data is user independent) are recommended to incorporate below points to make API robust against threats/abuse:

APIs are a great way to integrate applications within and across enterprises. They are quick and easy to implement. But at the same time, they can be dangerous if not secured properly, putting the entire enterprise at risk of exposing it to hackers. Therefore, API security should be well-architected and designed, much prior to actually starting the development of APIs. There is no proven technique to fool-proof APIs, but a well-designed API can greatly mitigate the security risks and enterprises can reap the benefits of APIs.