As Java developers, we’re no strangers to the concept of garbage collection. Our apps generate garbage all the time, and that garbage is meticulously cleaned out by CMS, G1, Azul C4, and other types of collectors. Basically, our apps are born to bring value to this world, but, nothing is perfect—including our apps that leave litter in the Java heap.

However, the story doesn’t end with the Java heap. In fact, it only starts there. Let’s take the example of a basic Java application that uses a relational database such as PostgreSQL and solid-state drives (SSDs) as a storage device. From here, we’ll explore how our applications generate garbage beyond the boundaries of the Java runtime.

Filling Up PostgreSQL With Dead Tuples

When your Java application executes a DELETE or UPDATE statement against a PostgreSQL database, a deleted record is not removed immediately nor is an existing record updated in its place. Instead, the deleted record is marked as a dead tuple and will remain in storage. The updated record is, in fact, a brand new record that PostgreSQL inserts by copying the previous version of the record and updating requested columns. The previous version of that updated record is considered deleted and, as with the DELETE operation, marked as a dead tuple.

There is a good reason why the database engine keeps old versions of the deleted and updated records in its storage. For starters, your application can run a bunch of transactions against PostgreSQL in parallel. Some of those transactions do start earlier than others. But if a transaction deletes a record that still might be of interest to a few transactions started earlier, then the record needs to be kept in the database (at least until the point in time when all earlier started transactions finish). This is how PostgreSQL implements MVCC (multi-version concurrency protocol).

It’s clear that PostgreSQL can’t and doesn’t want to keep the dead tuples forever. This is why the database has its own garbage collection process called vacuuming. There are two types of VACUUM — the plain one and the full one. The plain VACUUM works in parallel with your application workloads and doesn’t block your queries. This type of vacuuming marks the space occupied by dead tuples as free, making it available for new data that your app will add to the same table later. The plain VACUUM doesn’t return the space to the operating system so that it can be reused by other tables or 3rd party applications (except in some corner cases when a page includes only dead tuples and the page is in the end of a table). 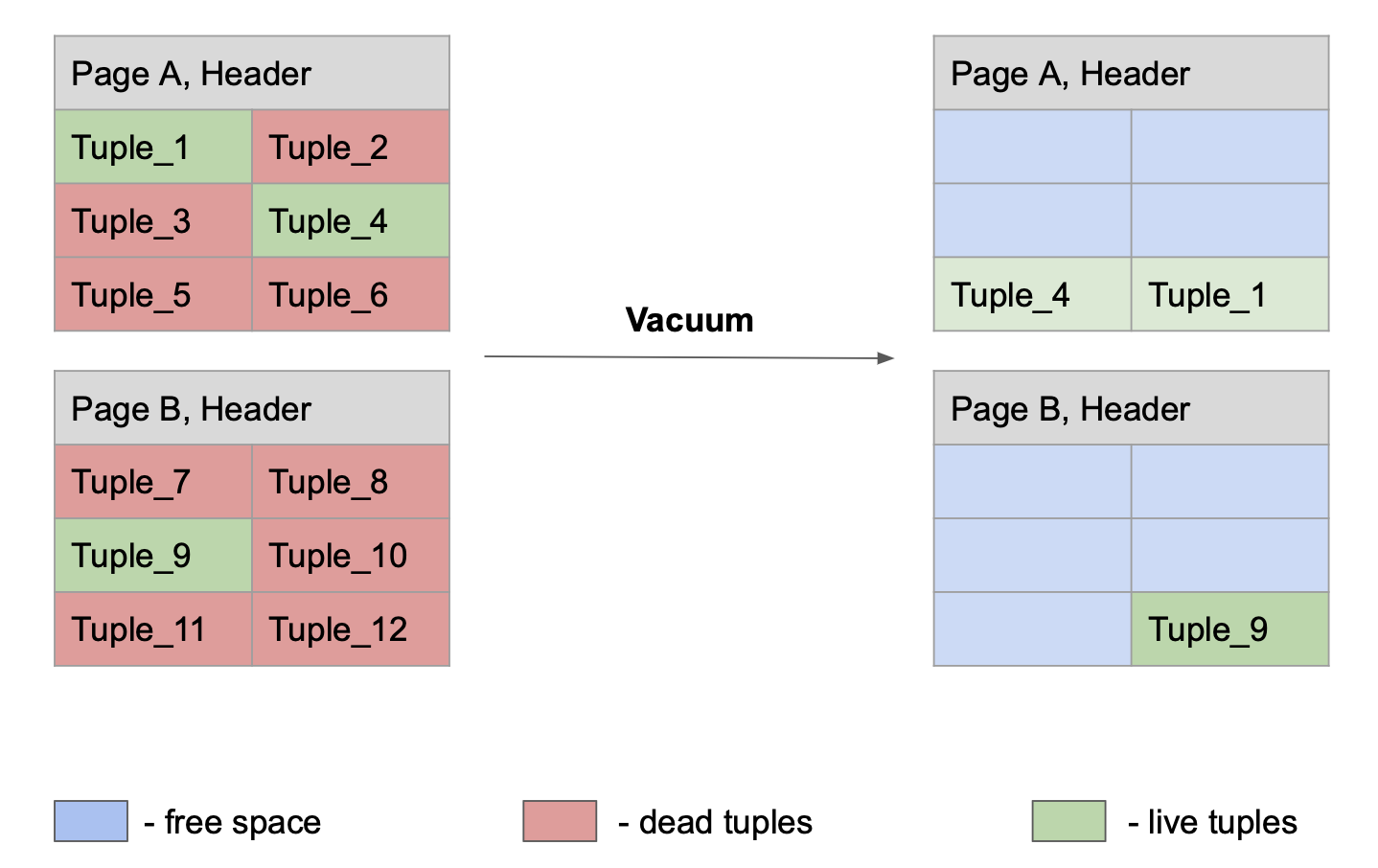 An example of (concurrent) VACUUM

By contrast, the full VACUUM does reclaim the free space to the operating system, but it blocks application workloads. You can think of it as Java’s “stop-the-world” garbage collection pause. It’s only in PostgreSQL that such a pause can last for hours (or days). Thus, database admins try their best to prevent the full VACUUM from happening at all.

Let me stop here and move down to the next level — SSDs. Check out this demo-driven article if you’d like to develop a much deeper understanding of vacuuming.

Whenever your Java application deletes or updates any data on disk - through PostgreSQL as discussed above or directly via the Java File API - then the app generates garbage on SSDs.

An SSD stores data in pages (usually between 4KB and 16KB in size) and the latter are grouped in blocks. While your data can be written or read at the page level, the stale (deleted) data can be erased only at the block level. The erasure requires more voltage than for reading/writing operations, and it’s hard to target that voltage at the page level without impacting the adjacent cells.

So, if your Java app updates a file, then, in fact, an updated segment will be written to an empty page potentially in a different block. The segment with the old data will be marked as stale and garbage collected later. First, a garbage collector in SSDs traverses blocks of pages with stale data and moves good data to other blocks (similar to the compaction phase in  Java’s G1 collector). Second, the collector erases blocks that have only stale data left and makes those blocks available to future data. 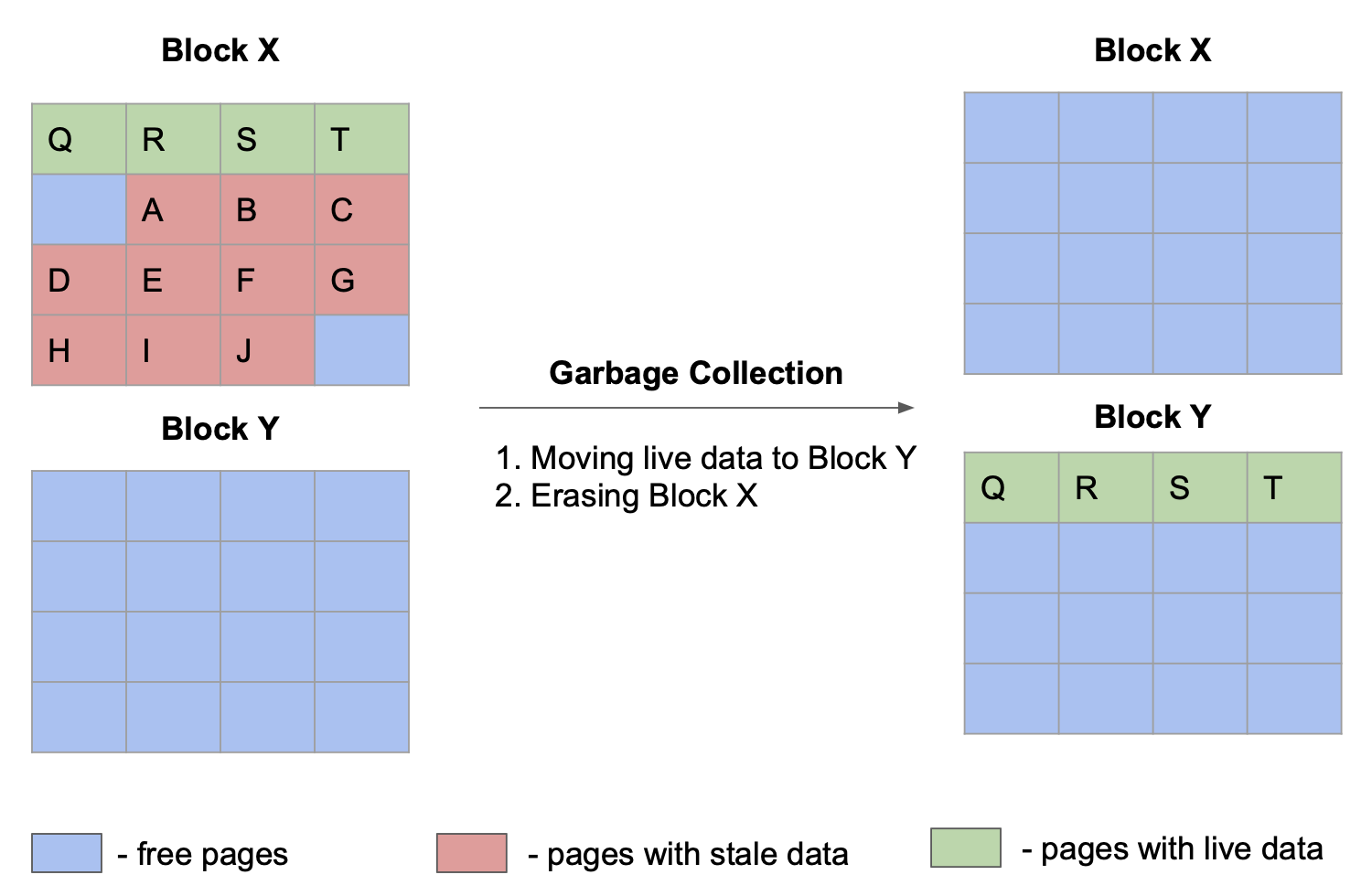 An example of garbage collection in SSDs

Curious how SSD manufacturers prevent or minimize the number of “stop-the-world” pauses? There is a concept of SSD over-provisioning, when each device comes with an extra space that is unavailable to your apps. That space is a sort of a safe buffer that allows apps to continue writing or modifying data while the garbage collector erases stale data concurrently. Read more about the over-provisioning here.

So, next time someone asks you to explain the internals of Java garbage collection, go ahead and surprise them by expanding the topic to include databases and hardware.

On a serious note, garbage collection is a widespread technique that is used far beyond the Java ecosystem. If implemented properly, garbage collection can simplify the architecture of software and hardware without performance impact. Java, PostgreSQL, and SSDs are all good examples of products that successfully take advantage of garbage collection and still remain among the top products in their categories.