In an ideal world, Docker containers should be ephemeral without any reliance on external storage. In the microservice world, this is achievable when services are connecting to external databases, queues, and other services.

Sometimes though, we need persistent storage, when we're running services such as Jenkins, Prometheus, or Postgres. Fortunately, there's a straightforward way to set this up now for our ECS Clusters using Docker volume drivers. In this article, you'll learn how to attach EBS volumes to your ECS Tasks, which detach and reattach automatically when your ECS Task gets restarted.

Overview of Volumes in ECS

By default, when you run an ECS Task it's going to have an area of storage on the host that's running it. This host is known as the ECS Container Instance, and is in actual fact an EC2 instance. This is fine for temporary data, but as soon as our ECS Task restarts we lose the data. What we need is a way to connect to external storage, such as AWS EBS or AWS EFS.

With Docker volume plugins (also known as volume drivers), such as REX-Ray, we can now achieve this. The REX-Ray plugin can configure AWS services, such as creating volumes and attaching volumes to EC2 instances.

As you can see in the diagram below, if we have an ECS Task running on an EC2 Instance, then the volume (e.g. EBS) needs to be attached to that instance: 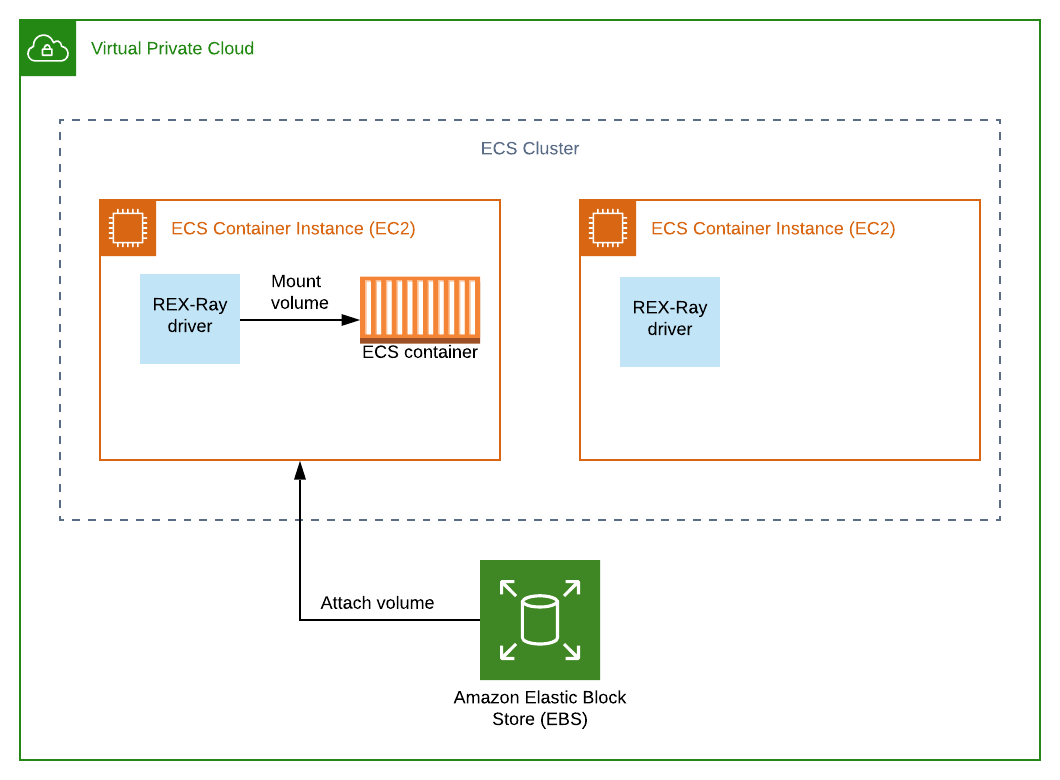 REX-Ray takes care of all of this for us, and also specifically can manage:

ECS has the EC2 and Fargate launch types. With EC2 you are responsible for provisioning the underlying EC2 instances on which your ECS Tasks will be deployed. With Fargate, you just have to specify the CPU and memory requirements, then AWS provisions everything needed to run your ECS Task.

Setting up a Persistent Docker Volume: A Working Example

You can follow along with this example, where we'll:

You'll need access to the AWS Console and AWS CLI to complete this example.

First up, we're going to create an ECS Cluster built on two ECS Container Instances (EC2 instances), provisioned by an AutoScalingGroup. The CloudFormation template below contains everything you need.

Since it's a rather large template, in particular, pay attention to the following parts which are specific to the fact that we're using volumes:

Save the CloudFormation into a file ecs-cluster.yml, then run the following AWS CLI command:

Make sure to add the parameters values specific to your setup:

In the AWS Console go to Services > CloudFormation After some time you'll see your stack reach the UPDATE_COMPLETE status. This may take up to 10 minutes. 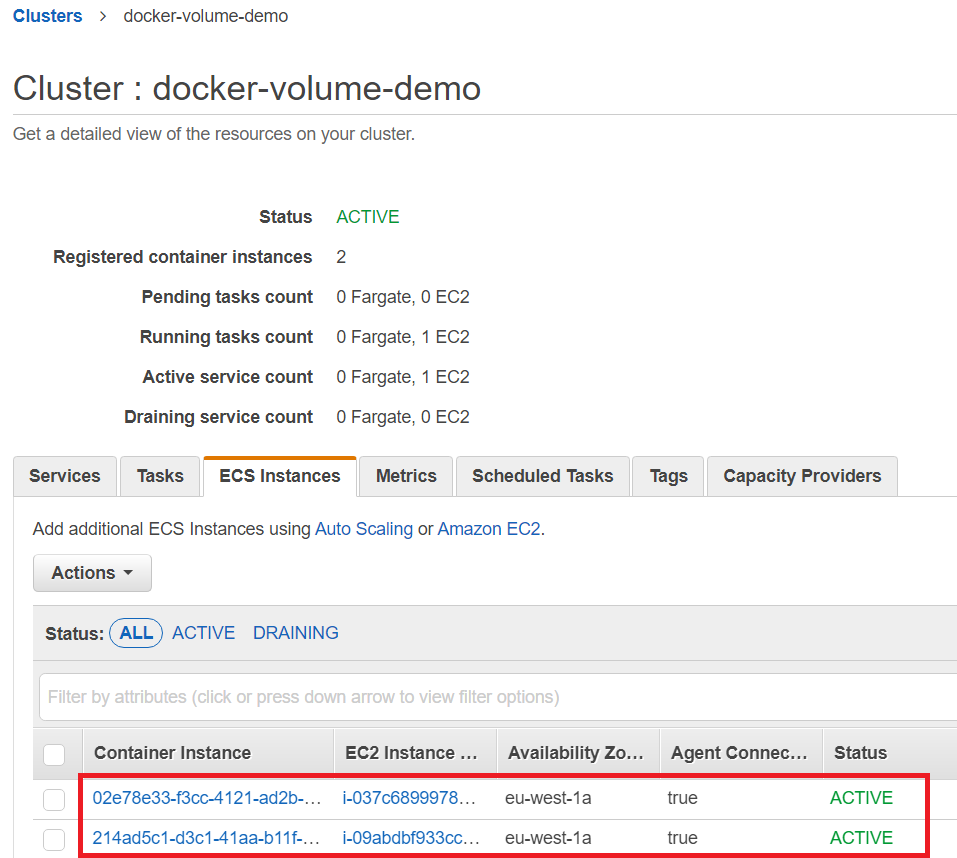 Provisioning an ECS Task and Service

Now that our ECS Cluster is setup, we just need to deploy an ECS Task and ECS Service. Remember that the ECS Task can be thought of as a Docker container, whereas the ECS Service manages the ECS tasks, including ensuring enough replicas are running and setting up networking.

You can add the following template to the end of your ecs-cluster.yml file. Specifically, it's worth noting the following sections, specific to volumes:

Once your CloudFormation stack update has completed, check out your cluster again in the AWS Console:

We now have an active service, with one running Postgres ECS Task. ✅

Connecting to the Postgres Container

To set this up you need the private IP address of the ECS Task, which you can find on the task details page of the AWS Console under Network:

We'll also need the public IP of one of the ECS Container Instances, which you can grab by clicking on the container instance id on the same the task details page.

This will setup the tunnel and continue running in the foreground. Note that if you already have Postgres installed on your local machine, you may have to choose a port other than 5432.

To create some data on the EBS volume, we're going to create a Postgres database and add some test data. To do that, you can either use the psql command line tool or follow along with steps below which use pgAdmin, which is free to download.

Once you've installed pgAdmin, starting it will open up a page in your browser. Right click on Servers and select Create > Server. Enter a server name:

Right click on the new dockervolume server, and select Create > Database. Enter a database name, then click Save:

Click on the new database, then select Tools > Query Tool, and we can start running some SQL.

Execute the following SQL (shortcut to execute is F5) which will create a table with some healthy test data:

We're going to change the container instance state to DRAINING, which will force ECS to deploy our task onto the other container instance. If we can still access the database data once the ECS Task moves over, then that proves it's successfully persisted in the EBS volume.

You'll need the full ARN of the container instance, which you can get with this AWS CLI command and picking the matching result:

Now we have the ARN, it's time to run the following update-container-instances-state command to change the state to DRAINING:

Once that's happened, head over to ECS Instances in the AWS Console and you'll see the instance is in the DRAINING state:

Head on over to Tasks and eventually, you'll see a new task coming up on the remaining ACTIVE container instance.

Wait for it's status to reach RUNNING.

Verify that the Database Has Come Back

Now that our ECS Task has moved over to the other container instance, we can validate that the data has persisted by running an SQL SELECT query.

First though, your old SSH tunnel will now have a connection error. You'll need to grab the new private IP address from the ECS Task details page, then run the ssh command again:

Back in pgAdmin, disconnect and reconnect your dockervolume Server. Then run the following SELECT query on the dockervolume database:

You'll see we still have the same data. Awesome!

You can remove the CloudFormation stack with the following command:

Note that this won't delete the EBS volume, which was created automatically by REX-Ray outside of CloudFormation. Find the correct volume id with the following command:

You should now understand that with the correct configuration, ECS Tasks can easily be setup to connect to AWS EBS volumes. The REX-Ray Docker volume driver does the hard work for us, and AWS ECS easily integrates with it to make sure that volumes are always attached to the correct EC2 host.

Please remember that this CloudFormation stack was designed as a simple example, and should not be used in production. For example, the Postgres instance should ideally not be exposed over the internet, and the ECS Container Instances should be deployed in a private subnet.

REX-Ray can also be configured to use AWS Elastic File System (EFS) too. If you have a requirement to access a volume from multiple ECS Tasks at the same time, you'll want to check out this option.

Now where next? Well it's really up to you. You could possibly try deploying a few more applications running on a Docker container on your own and let us know your comments.

This article was originally published on https://appfleet.com/