Today, you'll learn about my favorite Java 9 feature "factory methods for collection", which is introduced as part of JEP 269.

If you have worked in Groovy or Kotlin, then you know that how easy is to create a list with elements using collection literals, e.g. to create a list of 1, 2, 3, you can simply write val items = listOf(1, 2, 3).

Unfortunately, Java doesn't support that yet, but things have been improved with factory methods for collection in JDK 9, and it's almost like that. The JDK has added static factory methods like of() onto basic Collection interfaces, which you can use to create a list of items.

It allows you to create a list, set, and a map of values in just one line, just like you can do in Kotlin, Scala, or Groovy:

But the only catch is that you can create an unmodifiable or immutable List, Set, or Map.

The List, Set, or Map returned by the of() static factory method is structurally immutable, which means you cannot add, remove, or change elements once added.

Calling any mutator method will always cause an UnsupportedOperationException to be thrown. However, if the contained elements are themselves mutable, this may cause the Collection to behave inconsistently or its contents to appear to change.

How to Create Immutable List, Set, and Map in Java 8

This is the same as the unmodifiable list you create in JDK 6 or 7 as shown below:

The list returned by the unmodifiableList() method also doesn't support add, remove, or set operations and throws an UnsupportedOperationException if you call them.

The only difference between two code snippets is that earlier, it required more than 6 lines of code to create an immutable Collection, e.g. an immutable List, Set, or Map, but now you can do that in just one line.

There are also several overloaded versions of List.of() is available on the List interface, e.g. to allow you to create an immutable list of 1-10 elements and a variable argument method, which allows you to create the list of any number of elements.

The same is true for the Set.of() and Map.of() methods as well. Here is an example of creating an immutable Set in Java 9:

You can see that you can create an immutable Set in just one line. Similarly, to create immutable Maps, JDK 9 provides two methods — Map.of(K k1, V v1) and Map.ofEntries(). By using these two, you can create a Map of immutable entries: 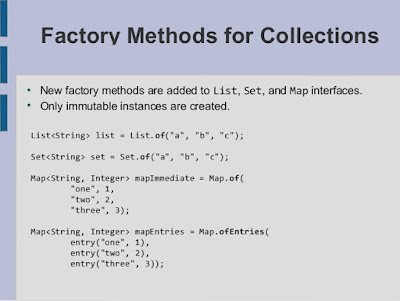 This method is overloaded to create a map of up to 10 key-value pairs, but if you need a bigger map with more mapping, then you should use the Map.ofEntries() method.

By the way, do you know how this feature is implemented? And why it wasn't available before?

If you look at the JDK 9 code or Javadocs, then you will find that this feature is implemented by adding static factory methods on key interfaces of the Java Collection framework, e.g. List, Set, and Map.

I hope more similar enchantment will come in future which makes using JDK API even easier.

Also, the rules that apply to the use of the different collections also apply (as you would expect) when using these factory methods.

So, you cannot pass a duplicate element when you create a Set because a Set doesn't allow duplicates.

Similarly, you cannot pass duplicate keys when you create a Map because a Map doesn't allow duplicate keys. If you do, then an IllegalArgumentException will be thrown

Also, you can't pass a null value to the collection factory method.

That's all about how to create an immutable list, set, and map in Java 9. The static method on collections has really made using the Java Collection API easier, and at least it's now similar to what Kotlin or Groovy offer. JDK 9 is full of such useful features, and stay tuned for more of such articles. If you can't wait, check out What's New in Java 9 — Modules and more, which provides a nice overview of all JDK 9 features.