Since 2005, I’ve been a proponent of CSS frameworks. I was even the leader of an open-source project, AppFuse, and during that time, we held a design contest (using Mike Stenhouse’s CSS Framework) in order to provide themes for our users.

Over the next few years, a few new frameworks came into my awareness; Blueprint in 2007 and Compass in 2008. None of these frameworks, however, could hold a candle to Bootstrap. When it first came to my attention, it was called Twitter Bootstrap—invented in 2010 by Twitter employees Mark Otto and Jacob Thorton. To quote their words from "Building Twitter Bootstrap", Issue 324 of A List Apart:

Our goal is to provide a refined, well-documented, and extensive library of flexible design components built with HTML, CSS, and JavaScript for others to build and innovate on.

It was in August of 2011 that Bootstrap was released more generally and it swiftly became the most popular GitHub project. Developers everywhere began to use it.

The following year, Angular JS came onto the playing field and took the world by storm. Version 0.9 first appeared on GitHub in October 2010 and version 1.0 was released on June 14, 2012.

In combination, these frameworks had an amazing run. It’s incredible to think that they’ve lasted this long, especially given that both these projects had massive rewrites!

Watch this tutorial as a screencast.

I’ve heard many developers say that Angular is dead. As a veteran Java developer, I’ve heard this said about Java many times over the years as well. Yet it continues to thrive. Angular is similar in that it’s become somewhat boring. Some people call boring frameworks "legacy." Others call them "revenue-generating."

Whatever you want to call it, Angular is far from dead. At least according to the popularity of two recent articles we’ve published! Many of you have flocked to our recent Angular posts—the proof is in the traffic numbers. 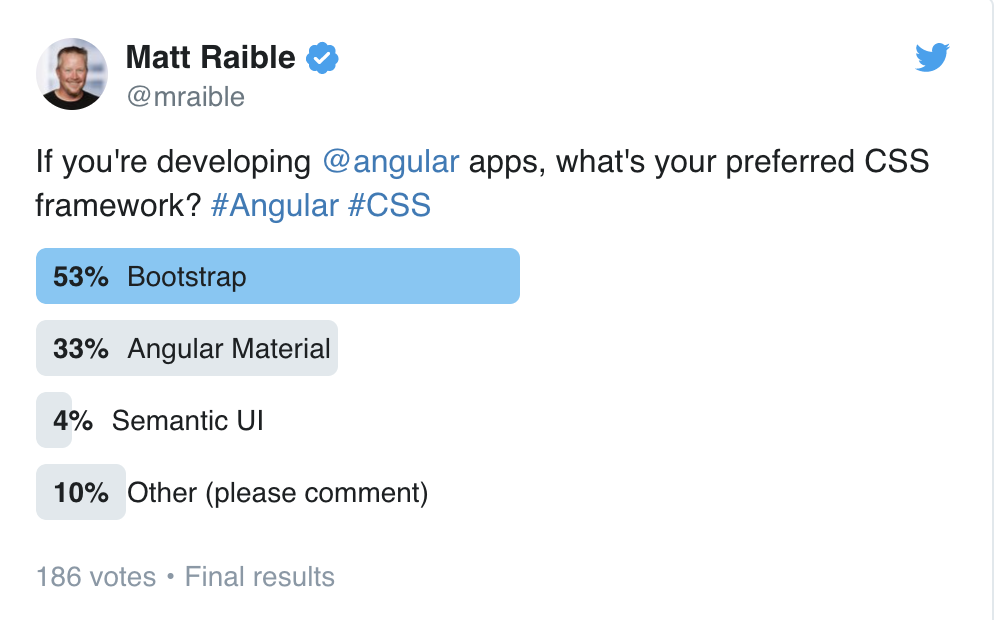 Today I’d like to show you how to integrate Bootstrap into an Angular 9 application. I’ll start with the CRUD example from my aforementioned Angular 9 + Spring Boot 2.2 tutorial. I’ll integrate Bootstrap, convert the app to use Sass (because CSS is more fun with Sass), make the app look good, add form validation, and write some code to develop a searchable, sortable, and pageable data table. The last part sounds hard, but it only requires < 10 lines of code on the Spring Boot side of things. Kotlin and Spring Data JPA FTW!

Clone the previous application into an okta-angular-bootstrap-example directory.

In a terminal, navigate into this new directory and its notes folder. Then install the dependencies for the Angular app.

If you run ng serve -o, you’ll get a blank screen. Look in your browser’s developer console, and you’ll see why.

Cancel the process and run ng add @angular/localize to fix this error. Now, if you restart your app, you’ll see it’s pretty simple. And kinda ugly.

Modify styles.css to add a reference to Bootstrap’s CSS file:

And change app.component.html to use Bootstrap classes.

To make the login button work, you need to configure both apps' security configurations.

Using your Okta developer account (you created one, right?), log in to your dashboard, and register your Spring Boot app:

Create an okta.env file in the notes-api directory and copy your settings into it.

Start your Spring Boot app by navigating to the notes-api directory, sourcing this file, and starting your app.

Then, create a new OIDC app for Angular:

Modify auth-routing.module.ts to use your Okta domain and client ID.

Now you should be able to log in with your Okta credentials and create notes to your heart’s content! 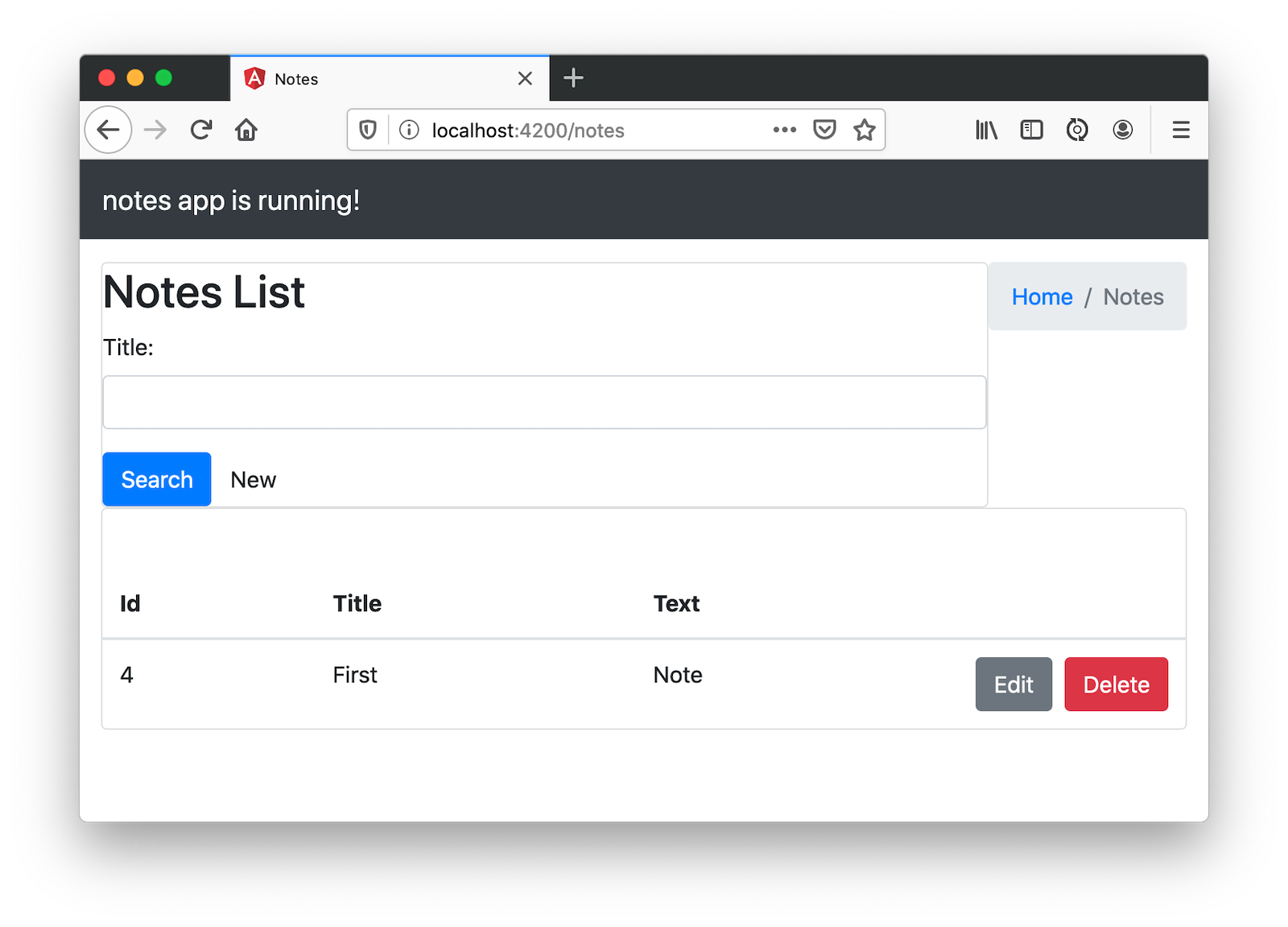 You’ll notice there’s some styling, but things aren’t quite beautiful. Yet…

Commit your progress to Git from the okta-angular-bootstrap-example directory.

Use Sass to Customize Bootstrap

Before you make things awesome, I’d like to show you how to convert from using CSS with Angular to using Sass. Why? Because Sass is completely compatible with CSS, and it makes CSS more like programming. It also allows you to customize Bootstrap by overriding its variables.

First, run the following command in the notes directory to convert the Angular project to use Sass.

If you run the following find command:

You can manually rename these to have a .scss extension, or do it programmatically.

Then, replace all references to .css files.

Modify angular.json to reference src/styles.scss (in the build and test sections).

To demonstrate how you can override Bootstrap’s variables, create a src/_variables.scss and override the colors. You can see the default variables in Bootstrap’s GitHub repo.

Then import this file at the top of src/styles.scss:

You’ll see the colors change after these updates.

Comment out (or remove) the variables in _variables.scss to revert to Bootstrap’s default colors.

You can see from the screenshots above that angular-crud generates screens with some styling, but it’s not quite right. Let’s start by adding a Navbar in app.component.html. Change its HTML to have a collapsible navbar (for mobile devices), add links to useful sites, and add login/logout buttons. While you’re at it, display a message to the user when they aren’t authenticated.

Remove the login and logout buttons from home.component.html.

Run ng serve and you’ll be able to see your stylish app at http://localhost:4200.

If you reduce the width of your browser window, you’ll see the menu collapses to take up less real estate. 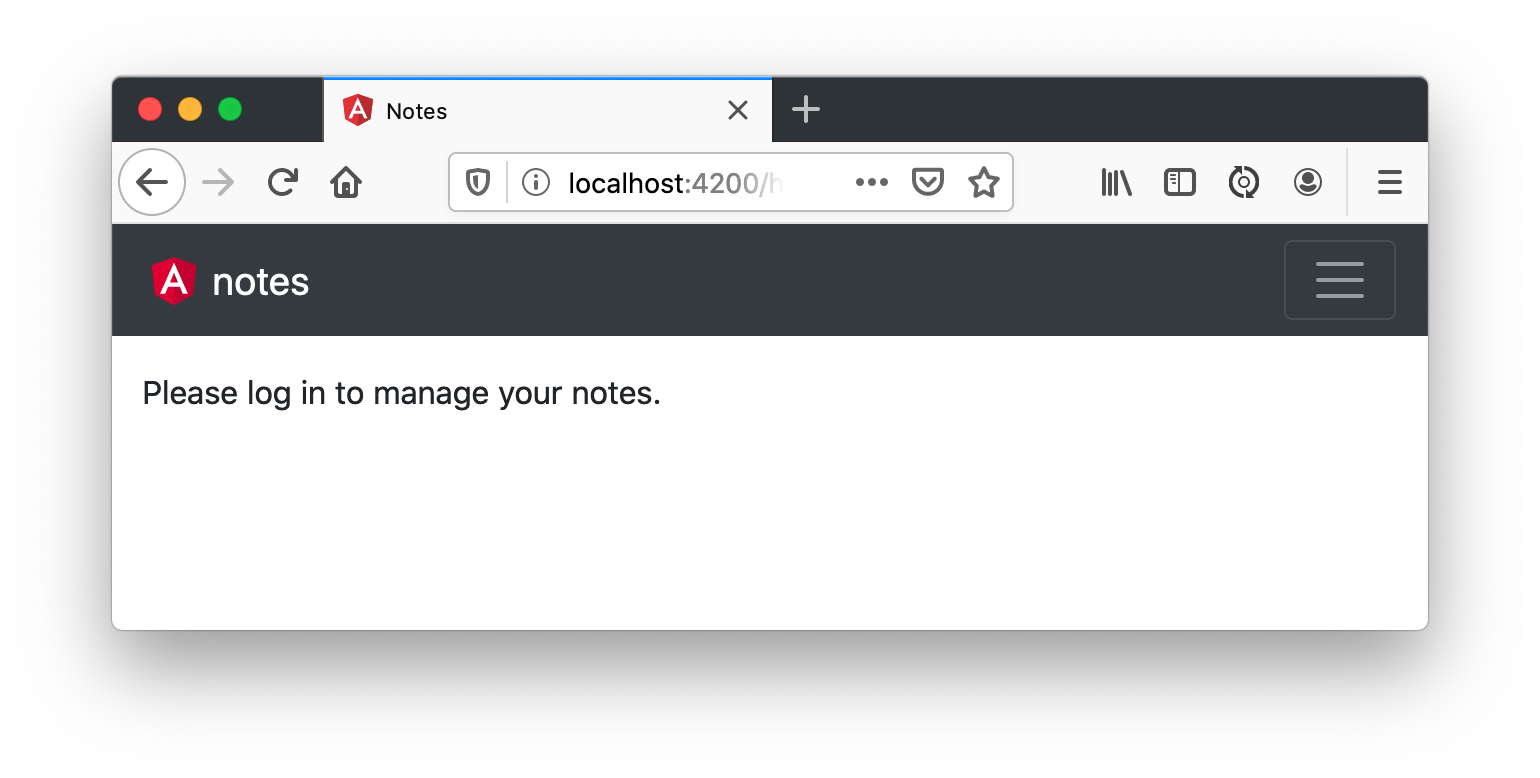 However, if you click on it, the menu doesn’t expand. To fix that, you need to use the ngbCollapse directive from NG Bootstrap. Modify app.component.html to have a click handler on the navbar toggle and add ngbCollapse to the menu.

Then add isCollapsed in app.component.ts and change the title to be capitalized.

Now, you’ll be able to toggle the menu! 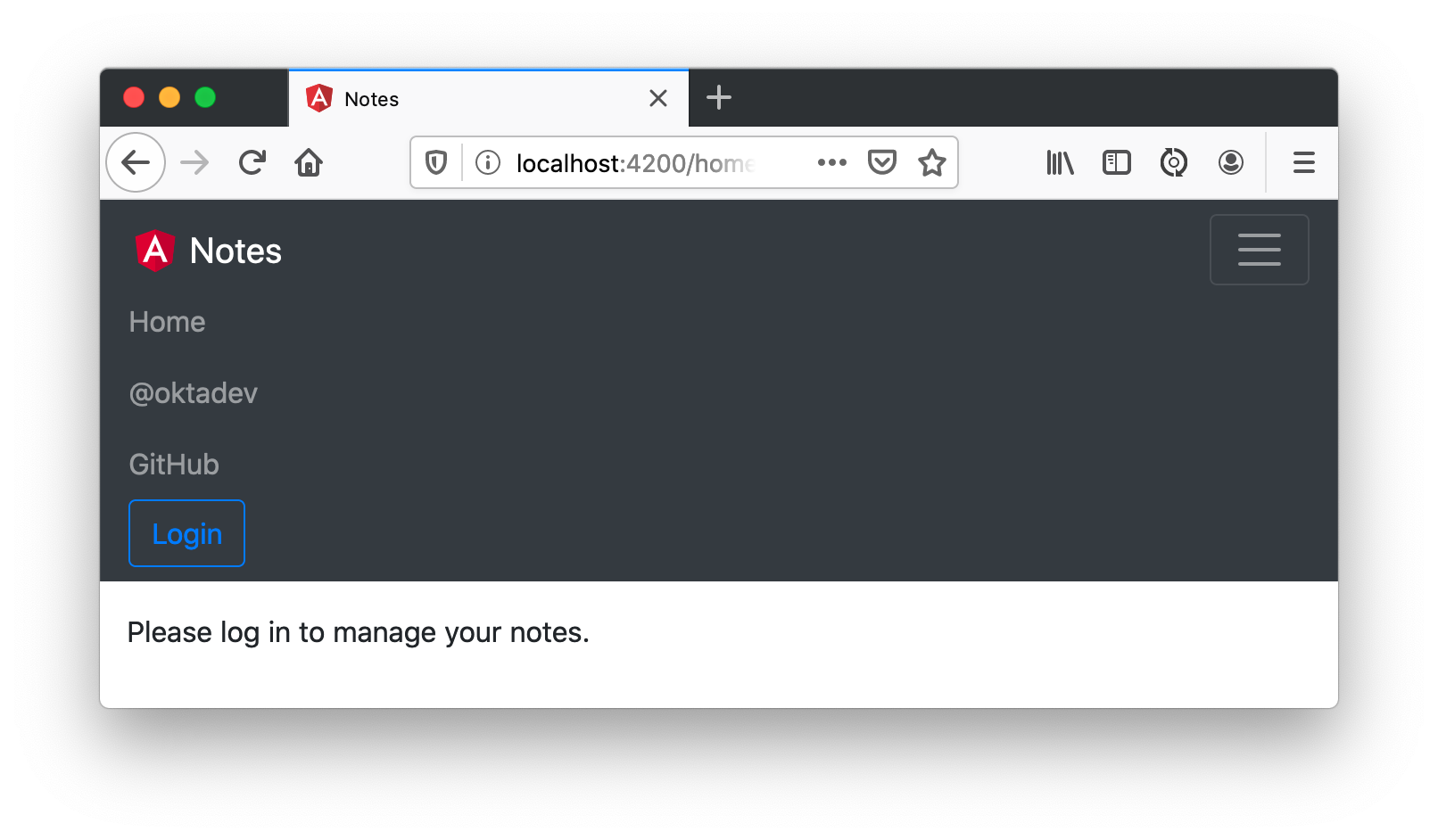 Modify the note-list.component.html so the breadcrumb doesn’t float right and all the content is in the same card.

Add Validation and Bootstrap to the Note Edit Template

If you click the New button, you’ll see the form needs some work too. Bootstrap has excellent support for stylish forms using its form-group and form-control classes. note-edit.component.html already uses these classes; you just need to rearrange some things to use the proper card-* classes. 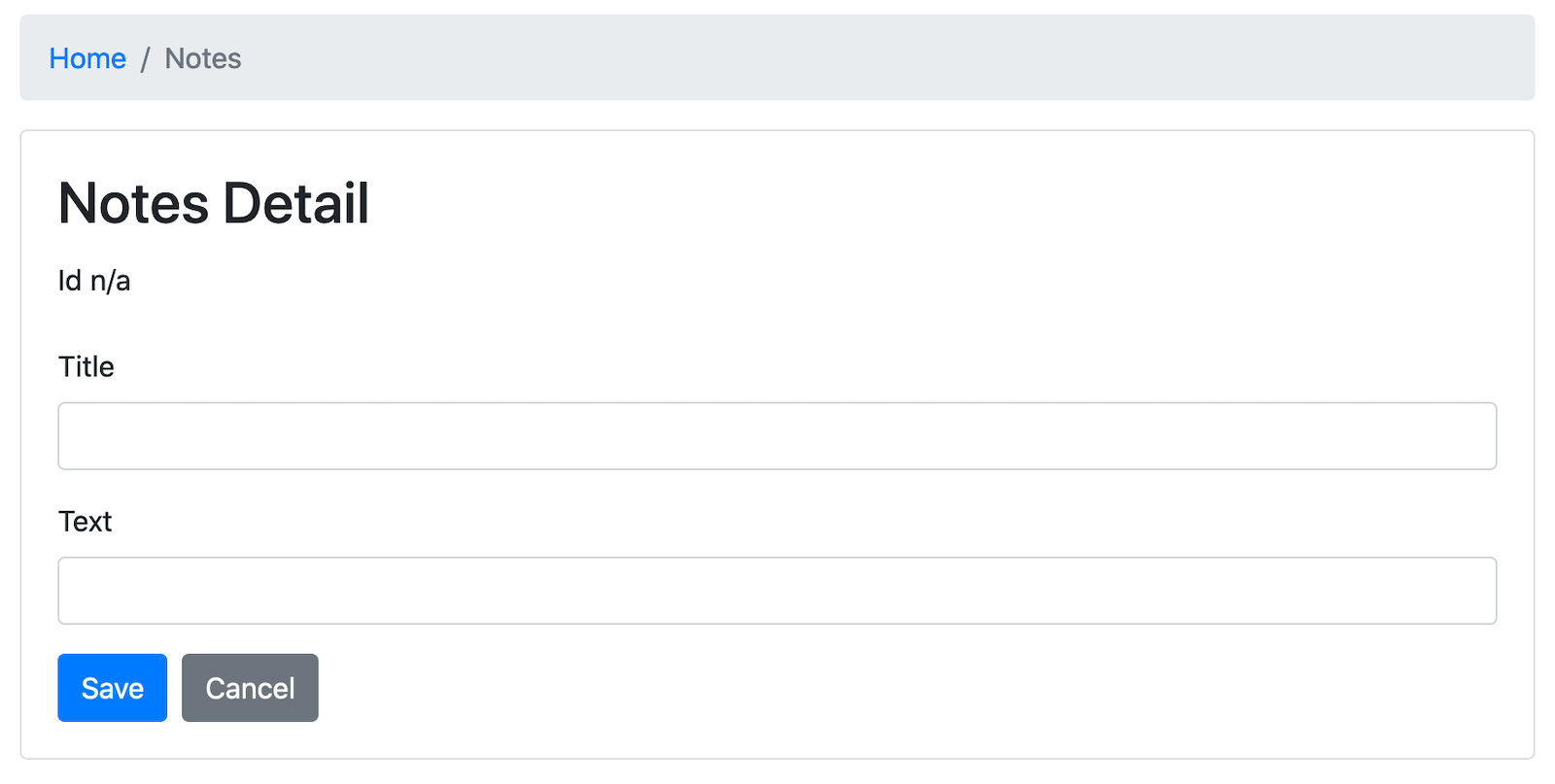 To make the title field required, add a required attribute to its <input> tag, along with a name so it can be referenced in an error message.

Now when you add a new note, it’ll let you know that it requires a title.

If you give it focus and leave, it’ll add a red border around the field.

At the beginning of this tutorial, I said I’d show you how to develop a searchable, sortable, and pageable data table. NG Bootstrap has a complete example I used to build the section below. The major difference is you’ll be using a real server, not a simulated one. Spring Data JPA has some slick features that make this possible, namely its query methods and paging/sorting.

Adding search functionality requires the fewest code modifications. Change the UserController#notes() method in your Spring Boot app to accept a title parameter and return notes with the parameter’s value in their title.

Add the new repository method to the NotesRepository in DemoApplication.kt.

Restart your server and add a few notes, and you should be able to search for them by title in your Angular app. I love how Spring Data JPA makes this so easy!

To begin, create a sortable.directive.ts.

Add it as a declaration in note.module.ts.

Add a headers variable to note-list.component.ts and an onSort() method.

Update the note-filter.ts to have column and direction properties.

Modify the find() method in NoteService to pass a sort parameter when appropriate.

Update note-list.component.html so it uses the sortable directive and calls onSort() when a user clicks it.

Add CSS in styles.scss to show a sort indicator when a user sorts a column.

On the server, you can use Spring Data’s support for paging and sorting. Add a Pageable argument to UserController#notes() and return a Page instead of a List.

Modify NotesRepository to add a Pageable argument to its methods and return a Page.

While you’re updating the Spring Boot side of things, modify DataInitializer to create a thousand notes for your user. Make sure to replace <your username> with the email address you use to log in to Okta.

Restart your Spring Boot app to make the data available for searching. Click on the Title column to see sorting in action! 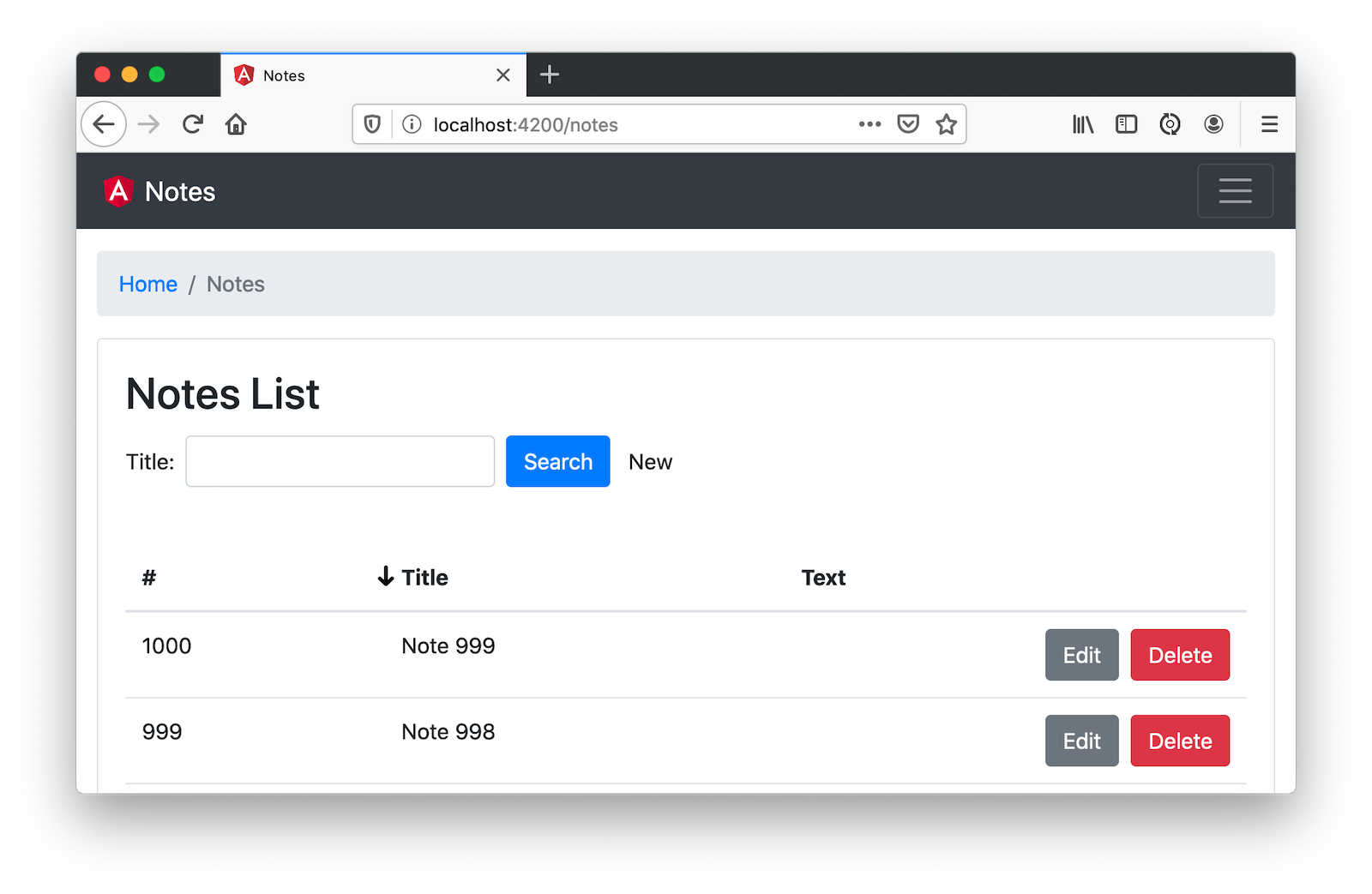 Add Pagination with Angular and Bootstrap

The last feature to add is pagination with NG Bootstrap’s <ngb-pagination> component. Begin by adding page and size variables (with default values) to note-filter.ts.

At the bottom of note-list.component.html (just after </table>), add the pagination component, along with a page-size selector.

In note-list.component.ts, add a total$ observable and set it from the search() method. Then add an onPageChange() method and an onChange() method, and modify onSort() to set the page to 0.

Then update notes.service.ts to add a size$ observable and parameters for the page size and page number.

Now your note list should have a working pagination feature at the bottom. Pretty slick, eh? 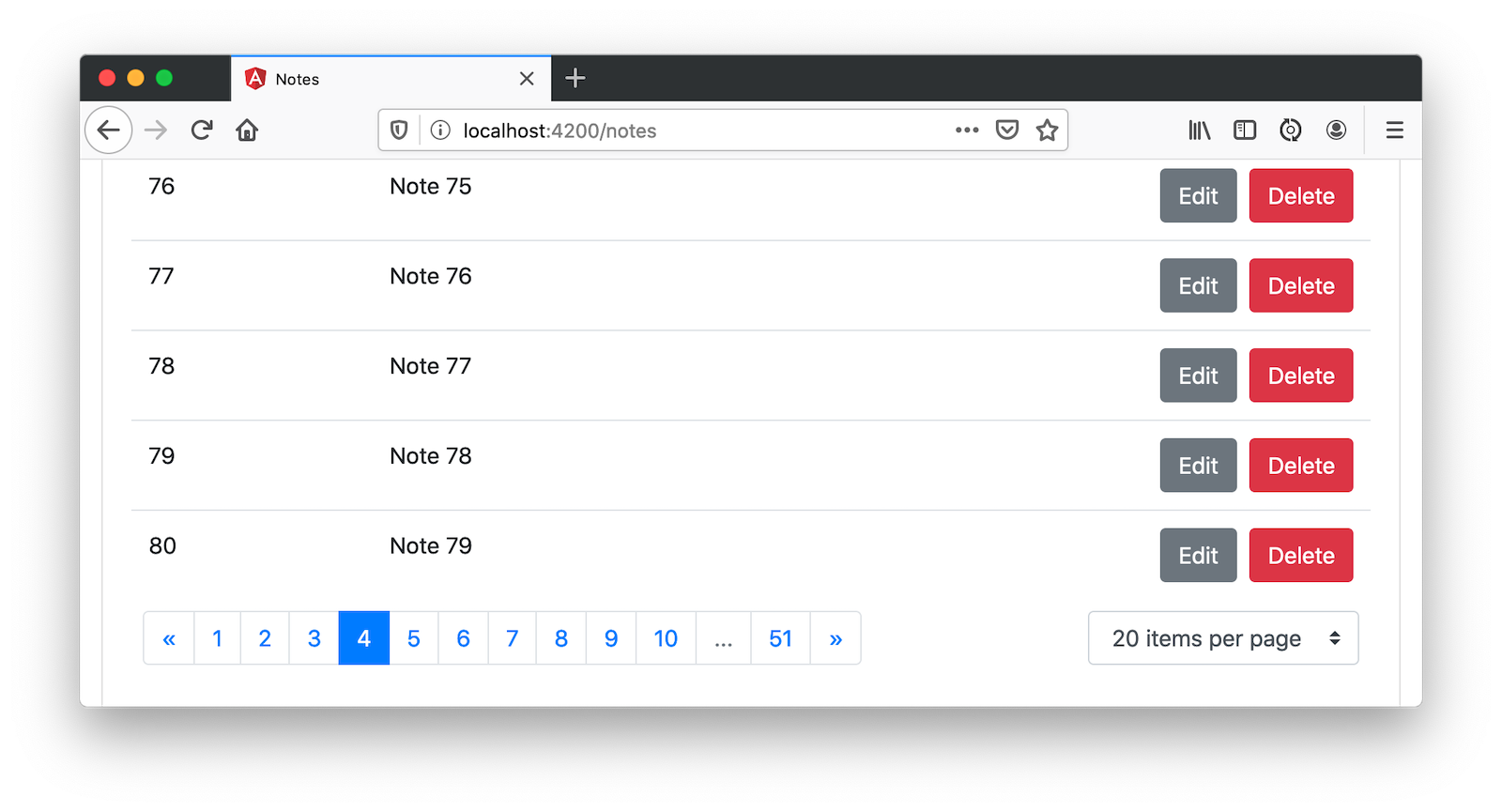 Phew! That was a lot of code. I hope this tutorial has helped you see how powerful Angular and Spring Boot with Bootstrap can be! You can find all of the source code for this example on GitHub.

I also wanted to let you know you can get a lot of this functionality for free with JHipster. It even has Kotlin support. You can generate a Notes CRUD app that uses Angular, Bootstrap, Spring Boot, and Kotlin in just three steps.

Of course, you probably want to see it running. Run the following commands to start Keycloak (as a local OAuth 2.0 server) and Elasticsearch, and launch the app.

Then, run npm run e2e in another terminal window to verify everything works. Here’s a screenshot of the app’s Notes form with validation.

I used the following resources to gather historical information about Angular and Bootstrap.

If you want to learn more about Angular or Spring Boot, I recommend these blog posts: