Cosmos DB is the new NoSQL database released in Azure Cloud by Microsoft. Unlike relational databases, Cosmos DB is scalable as it is a hosted database service, so it enjoys a lot of popularity among high transaction .NET and .NET Core applications.

Therefore, to tackle these two issues, it is ideal to introduce caching into your Cosmos DB application. You’ll see a dramatic improvement in your application performance and at the same time a significant reduction in operational cost because 80-90% of the time, your application will be fetching data from the cache instead of Cosmos DB.

The following code snippet explains how to use caching with Cosmos DB. It is assumed that a Cosmos DB instance contains a collection of Customers.

Using NCache as a Distributed Cache With Cosmos DB

When working with Cosmos DB, it is most likely your application is a high transaction application running in a multi-server environment through a load balancer and is making a lot of database calls. Moreover, a standalone cache will not be possible in this environment, so you need a distributed cache like NCache between the application and the Cosmos DB database.

You need a distributed cache because it allows you to add more cache servers as your transaction load grows, so the cache never becomes a bottleneck. Hence, the number of your application servers doesn’t matter because you can have sufficient cache servers between the application and the database, unlike a relational database which is a major choking point for any scalability.

While Cosmos DB scales much efficiently than a relational database, it is still no match for an in-memory distributed cache like NCache which will sit with your application’s VNet. In fact, a portion of the cache will reside within the application process itself (called a client cache) which gives you in-proc caching speed. 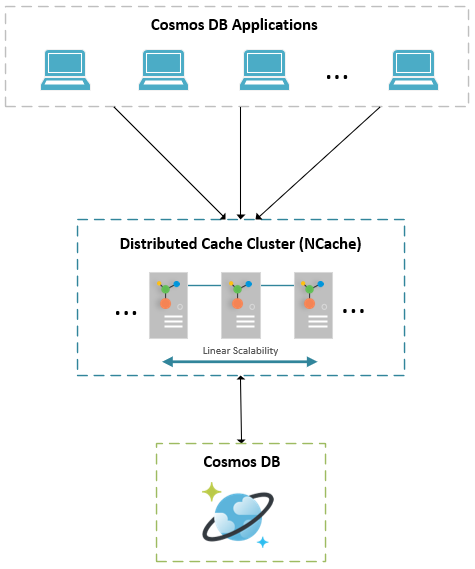 Using a distributed cache, you enhance your Cosmos DB application performance dramatically by reducing database trips across the network especially for read operations. Thus, while you can retrieve single entities from the database, a far more economical approach in terms of throughput and reduced R/Us is to retrieve the collection of items from the database and apply the operations at the caching tier. Any changes to the state of the collection can later be pushed to the database at the end of the operations.

You can cache the collection as a single item if you want to load the collection items collectively, for example, all Germany customers. You can query Cosmos DB for all customers in Germany and return the results as a single list which can be added to the cache for further use.

The following code sample shows how to do this for retrieving the list of Germany customers from the database:

You can associate metadata with cache items in NCache to categorize data through unique identifiers such as tags. This way, multiple items can be retrieved from the cache against a single identifier, for example, customers belonging to Germany.

To achieve this, you can query for Germany customers in Cosmos DB and associate a tag such as Customer:Country:Germany against the resultant items. Caching these items separately will make them available for various query combinations and even faster fetches of a single customer.

Using the previous example, we first search the cache for customers with the tag Customer:Country:Germany. If items do not exist in the cache, query Cosmos DB for items in the Customer collection that have their “Country” attribute specified as “Germany”. However, since we now want to cache the collection items separately, we do the following:

NCache is offered in major cloud marketplaces such as Azure and AWS in addition to downloading for on-site use. For all other cloud systems, you can just download and install NCache on a virtual machine in a model of Bring Your Own License (BYOL). NCache is deployed in Azure in the following ways:

For more detail on these options, have a look at Cloud Deployment Options for NCache.

To sum it up, introducing caching in your Cosmos DB application can further push the envelope in terms of speed, reliability, and availability. By using NCache with Cosmos DB, you kill two birds with one stone – one being a boost in application performance because the cache resides within the application process, and second, being the drastic reduction in cost as 80-90% of your data is accessible without making costly database trips to Cosmos DB.

Published at DZone with permission of Iqbal Khan. See the original article here.