As more and more IoT deployments look to leverage the power of cloud-based solutions, we here at InfluxData have been working closely with Cloud Service Providers to make sure that InfluxDB continues to be the go-to Time Series Database for IoT. Google's Core IoT platform is no exception, so we've built a new Telegraf Plugin for Google Core IoT as well as a complete end-to-end tutorial on deploying your IoT solution using Google Core IoT and InfluxData.

This tutorial will assume that you have an instance of InfluxDB running that is accessible.

We will be also be building and installing a version of Telegraf that supports the Google Core IoT Pub/Sub client. That instance of Telegraf must be running on a publicly accessible Internet server that is available with an SSL encryption certificate. Google Pub/Sub can only write to SSL-secured instances of Telegraf.

I've got to say a special thanks to the engineers at Google for their assistance in making this happen. Without our close partnership, this would not have been possible.

What You Will Need

As I said, this is a complete tutorial on building an end-to-end IoT application with Google Core IoT, so we will definitely need to build ourselves an IoT device. There are a couple of ways to do this, including not building a device at all, so we will go through all the options.

What you'll need to complete this tutorial:

You can, of course, run your InfluxDB instance in the Google Cloud, but getting that set up is beyond the scope of this tutorial.

If you want to use real sensor data, you'll need:

Otherwise, you can use virtual data generated by the application in simulation mode.

All of the code required for this tutorial is available in the following GitHub repositories:

You will have to build Telegraf from source (from the link above) in order to use this integration, as the plugin is not yet available in an official build of Telegraf yet. Complete instructions for doing that are included below as well.

IoT Core Setup on the GCP Side

Before you can set up IoT Core, you will need an account with Google. You can start with your Google account, if you have one, or create a new one for this tutorial. Once you have your Google account ready, you will be able to run the cloud commands below. Alternatively, you can use the Google Cloud Console. The instructions for that are in the next section.

Start by installing the Google Cloud Command Line Tools according to this document from Google. You'll need to install the components, authenticate to Google Cloud, and create and configure your project:

The Google Cloud IoT platform requires that all communications be secured with SSL/TLS, so you'll need to generate a Public/Private key pair in order for your device to communicate with the Cloud. First, you'll generate RSA Public and Private keys, and then, you will use those keys to send data.

As long as your computer has OpenSSL installed, you can run the following commands to generate the required key files:

Note: replace public_key_file with the path to the public key file generated above.

You will need to login to your Google Cloud Platform account. There's a great Getting Started Guide to get you started.

You will need to create a Google Core IoT Registry:

Once you've created your Public/Private key pair and cert for your device, you can create a device to write to that registry.

Once you've created the device with the proper security certificate, you can run the client application on that device. 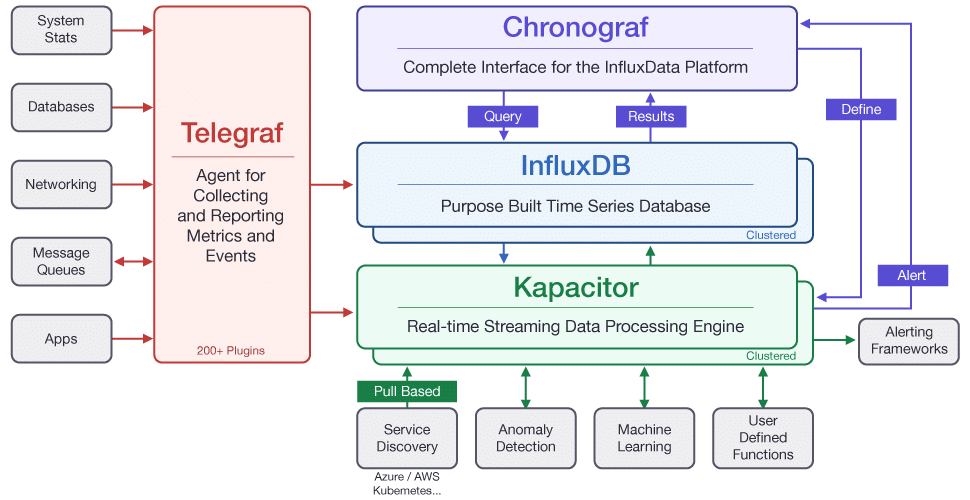 This tutorial will assume that you have an instance of InfluxDB running that is accessible.

We will be also be building and installing a version of Telegraf, which supports the Google Core IoT Pub/Sub client. That instance of Telegraf must be running on a publicly accessible Internet server that is available with an SSL encryption certificate. Google Pub/Sub can only write SSL-secured instances of Telegraf.

Right now, the Google Core IoT Plugin for Telegraf has not been released in a 'released' version of Telegraf. This is a preview release and, hence, must be built from source before running.

One of the prerequisites for this tutorial is understanding how to use Go. Installing and configuring Go is beyond the scope of this tutorial, but you can find detailed instructions for your operating system here.

Note: It is possible to build Telegraf on your local machine and run it on your Internet-accessible server by setting some GO environment variables, which we will also cover later.

First, you will want to clone the GoogleIoTCore branch of Telegraf to your machine, then you'll need to build telegraf:

The above code will build the Telegraf agent for your platform. If you are building on a Mac OS X machine, but plan to run it on a Linux machine, you can still build it locally:

The above code will build a 64-bit linux version of Telegraf.

Once you have built Telegraf, you will need to create, and then edit, a configuration file to adjust the Google-specific section.

Once this file is complete, save it to /etc/telegraf/telegraf.conf, and then you can start telegraf:

You can verify that your Telegraf agent is listening with:

And, you can look for the output line:

The client app is also written entirely in Go, so you should be able to run it on virtually any device that supports Golang. For this example, I have been running it on a Raspberry Pi 3, but any device that has a network connection and can run Go code should be fine.

The above command (after you replace the values between []s) will publish 'virtual' (random) values in JSON format.

Sample Output on the Device Without a K30 Sensor:

Would publish live sensor data — assuming you have the above-mentioned sensors — in Line Protocol format and show the following output:

Note that the output is four lines of Influx Line Protocol, so four temp and humidity points are written with each iteration.

This writes data to the Google Core IoT MQTT broker, which then sends it to the Google Pub/Sub agent, which pushes to Telegraf using the GoogleIoT branch of Telegraf from davidgs.

If you've gotten everything configured correctly and are running the client app, you should be able to launch Chronograf and see data streaming in to the database in real time.

You now have a complete, end-to-end data pipeline from device to Google Core IoT and into InfluxDB for your IoT sensor data!

A huge thanks to Daz Wilkins for 90% of the code! Couldn't find it on his Github — good developers copy, great developers paste. Happy coding!