The (All Too Common) Problem: Boring, Kind of Useful, Static Dashboards

Those of us that work with data often want to make useful dashboards that make it easier for ourselves and other people within our team and organization, to gain insight and make sense of the data we collect.

A common problem I’ve run into (both when creating dashboards and using them as a stakeholder) is that many dashboards aren’t interactive enough for non-technical stakeholders to get their questions answered without asking engineers to write new code or change the underlying queries powering the dashboard. Or worse, stakeholders try to dig into the code and accidentally break things!

Fortunately, many visualization tools have features to make your graphs, maps, tables, and other visualizations interactive via the tool's native UI. It’s a win-win situation: more usability for the stakeholders who rely on your dashboards, and less of your time spent attending to minor customization changes.

Here’s an example in Grafana, the open-source visualization tool, where I’ve created “pickers” (filters) that allow me and other stakeholders of the dashboard to choose values from a drop down menu and immediately see our selections appear in the visual, without having to change any of the underlying SQL queries powering the dashboard. 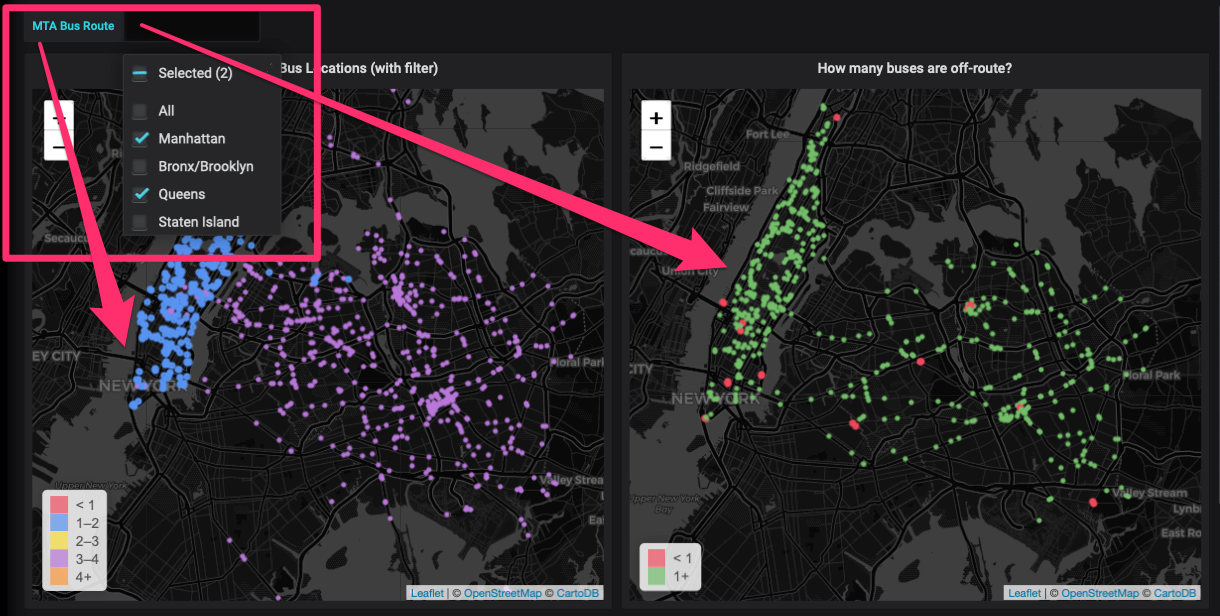 Grafana variables allow you to use a drop down menu to select various options, no code modifications required

However, enabling features like pickers in the Grafana UI can be tricky.

In the rest of this post, I will show you how to use Grafana’s  variables  feature to build your own interactive dashboards. I’ll illustrate the process using the example of monitoring the live locations of buses going on different routes in New York City, but the steps I follow will work for any scenario.

Try It Yourself: Implementation in Grafana

Ready to learn how to use variables in Grafana dashboards powered by PostgreSQL queries?

I’m going to use the example of visualizing the real-time location in New York City, using data from the Metropolitan Transportation Authority.

I have an existing Grafana World Map panel setup, pictured below. To replicate my initial setup (I use PostgreSQL with TimescaleDB enabled as my datasource), you can clone and follow the steps in this Github repo.

Here’s what my panel looks like before we make it interactive. You can download the JSON to replicate the dashboard in this Github repo. 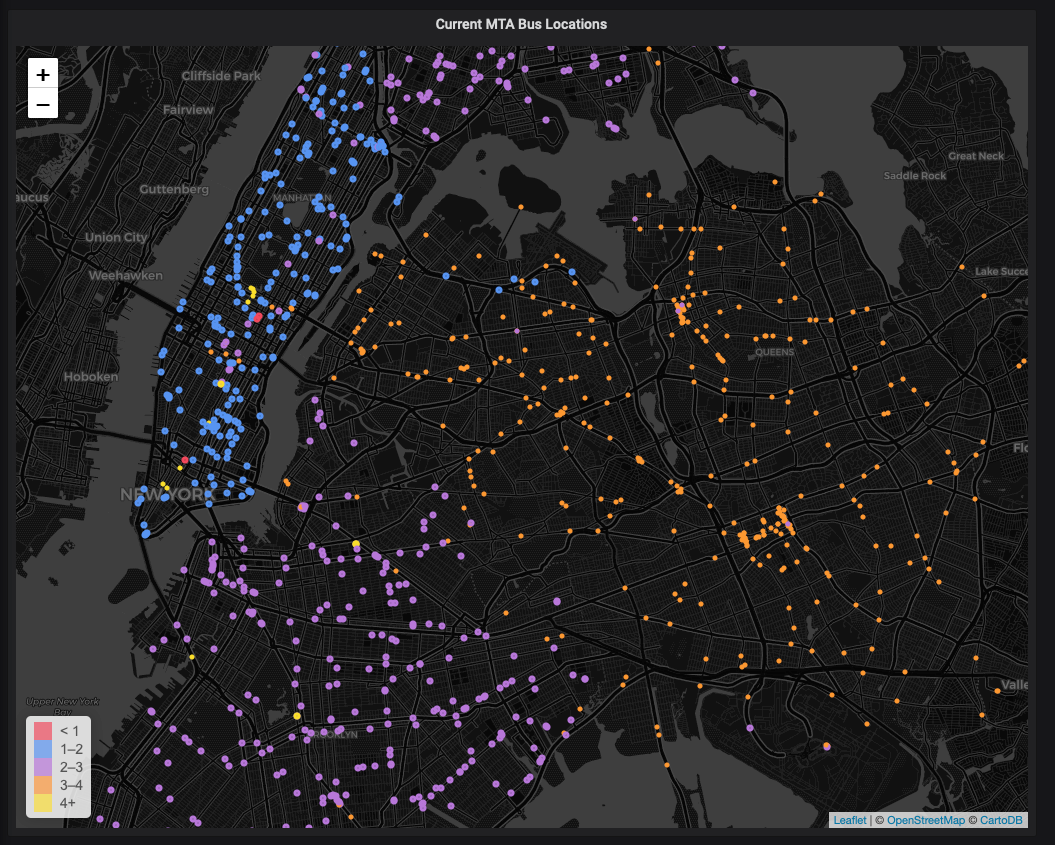 Here’s the corresponding SQL query I used to generate the data for that panel:

From the query above, notice that I’m using the variable  color  to distinguish between different types of buses based on their route. There are 4 types of bus routes: M, B, S, and Q — corresponding to New York’s boroughs of Manhattan, Brox and Brooklyn, Staten Island and Queens.

I then use Grafana’s threshold settings to assign each bus type to a color:

Threshold settings to give each bus type a unique color

Notice that there are 5 colors - one for each bus route M,B,Q and S, as well as one for routes that don’t fall into those categories.

While the standard static panel tells us the live location of the buses, there’s not much that we can do to interact and explore the data more, apart from zooming in and out.

Let’s change that by creating a variable to alter which bus routes we display on the map.

Step 1: Create a Variable as A Query

Our goal here will be to create a variable which controls the type of buses displayed in the visual, based on the bus’ route.

Grafana includes many types of variables, and variables in Grafana function just like variables in programming languages. We define a variable, and then when we reference it, we’re referring to the thing we defined the variable as.

To create a new variable, go to your Grafana dashboard settings, navigate to the Variable  option in the side-menu, and then click the  Add variable  button.

In this case, we use the Query  type, where our variable will be defined as the result of an SQL query. 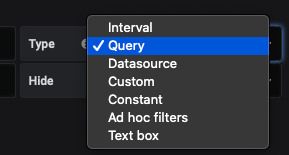 How to create a variable of type Query

Under the General section, we’ll name our variable  route . Then, we’ll assign it the label of “MTA Bus Route.”

Name, label, and type settings for our route variable

Labels in Grafana are the human-readable descriptors that appear next to your dashboard’s drop-down (picker) menu. 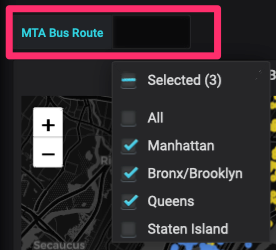 Your variable  labels  display in your final dashboard UI, while  name  is used to reference the variable in queries used in dashboard panels.

Secondly, let’s define the query that will define the variable, under  Query options . 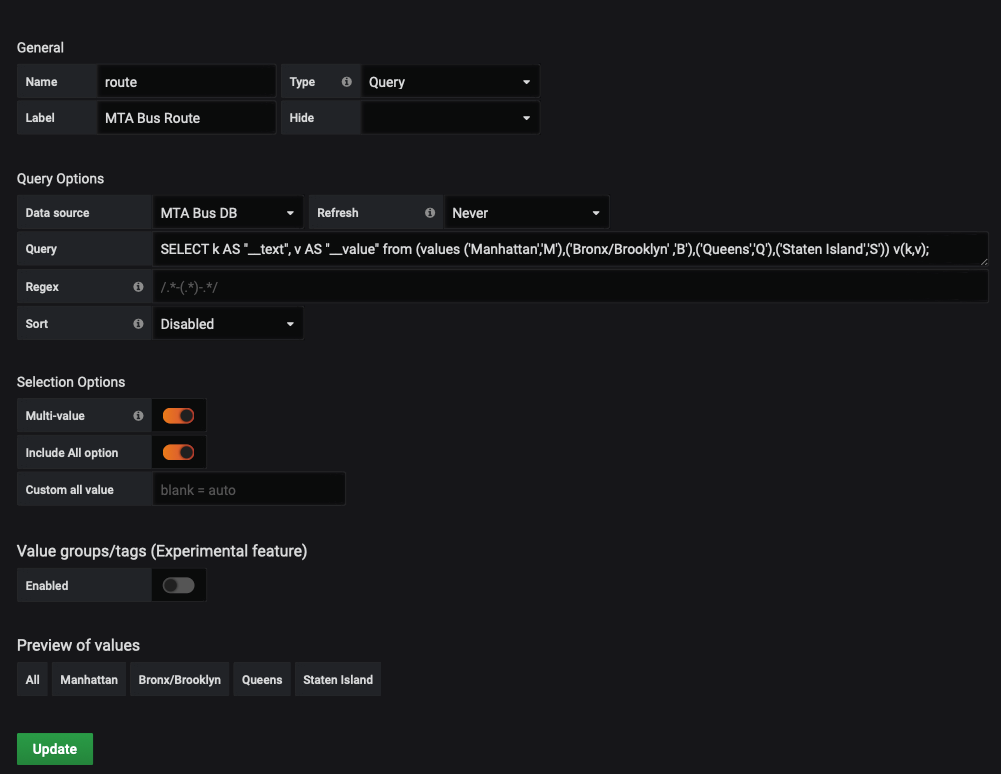 Here, we select our variable’s data source, which is the database that the query will execute against. In this case, we use “MTA Bus DB”, the PostgreSQL database that houses our MTA Bus data.

Now, we define a SQL query whose results will define our `route` variable:

This query returns the letters M, B, Q, S — which are the types of buses, based on their  route_id — for a refresher, see the SQL query in the prerequisites section.

We could also use a query that’s more advanced but gives the additional benefit of human-readable names, rather than using symbols or acronyms:

Here we define four key-value pairs to be the set of possible values for our  route  variable, where the key is the human-readable name of the bus type and the value is the letter corresponding to the route type.

Next, let’s define how we will select our variable.

We can see a preview of what the resulting options available to us will be at the bottom under "Preview of Values." In our case, we have  ‘All’, ‘M’, ‘B’, ‘Q’, ‘S’, which are the options we want (i.e., our 4 individual bus routes and the “select all” option).

Step 2: Modify Your Graph Query to Use Your New Variable

In this step, we modify our query to use the variable we created in Step 1.

For a SQL query, we do this by modifying the  WHERE clause  to filter out undesirable results. In our case, we want to show only the bus types that are selected through the dropdown menu picker in the UI.

The relevant part of the query, where we reference our new variable by the name we defined in Step 1, is these lines 13 and 14 above:

This line says that our visualization displays only if the first letter of its  route_id  is in the set of allowed routes (as selected by the user through the dropdown picker, defined by the  route  variable). The values selected in the picker will define what our  $route  variable will be.

Once we’ve modified the query, we then save our changes and check if our variable works as expected.

To do this, we select various routes in the picker and verify that only our selections appear, like so:

Our new interactive dashboard, where our map updates based on the routes we select in our drop down menu.

As you can see, our map automatically changes the bus types displayed in the visual ,based on the selection we make in the dropdown! Notice how the change takes place in multiple panels, since they all use the variable,  $route  in their query.

Found this tutorial useful? Here’s are a few more resources to help you build Grafana dashboards like a pro:

Technical Session on Getting Started with Alerts in Grafana

Learn how to define alert rules for your panels and dashboards, configure different notification channels, like Slack and email, and take my demo and integrate it into your own Grafana projects.

If you RSVP and can’t attend live, no worries. I’ll make sure you get the recording and resources shortly following the session.

This post gives you step-by-step demos and shows you how to create 6 different visuals for DevOps, IoT, geospatial, and public data use cases (and beyond), as well as answers to common questions about building visuals in Grafana.

We’ve compiled all our tutorials, tips, and tricks for visualizing PostgreSQL data in Grafana into this one doc. You’ll find everything from how to create visuals for Prometheus metrics to how to visualize geo-spatial data using a World Map. Check it out here.

Published at DZone with permission of Avthar Sewrathan. See the original article here.