The most well known and reliable development language is Java—which recently shifted to a 6-month release schedule. This allows the user to have access to more frequent updates to the language. Among other things, the modular system was recently introduced in Java 9.

The first is reliable configuration, which replaces the class-path mechanism, allowing program components to declare explicit dependencies upon each other.

The second is strong encapsulation, which lets components declare which public types are accessible to others, and which aren’t.

Modules house grouped packages, serving as building blocks within larger programs. The declaration of a module specifies which other modules are required to compile and run code; packages, classes, and interfaces.

Visibility modifiers such as public, private, protected, and default aren't enough for external visibility. For example, a “Ulti” class can be used throughout a library for different packages within a JAR file, however, it is not meant for use outside of the library. With JPMS, you won’t have to worry about this type of situation.

When Java 9 was created, the JDK went under a major refactoring to modularize its content. It created various modules to organize the contents. Some examples include: java.base, java.sql, and java.xml(along with many others). To date, there are a total of 60 modules in Java 14 JDK.

The modularization enabled the possibility of reducing the Java runtime to include just the java.base if your application only depends on this module. By using the jlink tool that is bundled with the JDK, you can create a micro runtime with only the JDK modules you need. This post won’t cover how to use jlink—as it is not the focus—but you can see an example on this Baeldung article.

For the rest of this article, you should have at least some basic understanding of Spring Boot, Maven, and REST web services principles as well as Docker installed on your machine.

First, you’ll need a Java 9+ JDK in order to use modules. If you have been using Java 8, you’ll likely have to download a separate JDK with a version of 9 or later to be used for this tutorial. This project is set up to use JDK 11 in this tutorial. You can download the JDKs from AdoptOpenJDK. Just make sure your JAVA_HOME environment variable is pointing to that JDK.

In this article, we’ll be covering how to develop a simple application with two modules: the application module (that contains the web-facing classes) and the persistence module (that contains the data access layer). We’ll also be using a couple of dependencies (spring-boot-starter-data-mongodb and okta-spring-boot-starter) to illustrate how they are configured when building a modular application.

The project source code can be found at GitHub

How to Structure a Modular Project with Maven

We’re going to create this project folder structure manually to better understand it. Each module will live inside a separate directory and have its own pom.xml file. There will also be a pom.xml on the project root that will serve as the parent pom for the modules. Create the following folder structure:

First, let’s define the root pom.xml. It contains the common <parent> indication to spring-boot-started-parent and two entries in the <module> section. These entries are the names of the directories for the modules we are developing. Please note that they are specific to Maven and denote sub-projects, having nothing to do with the Java modules that we’ll be working on later.

The persistence module will have a pom.xml like the one below and point to the parent pom.xml that we defined earlier. This will have a dependency on spring-data-mongo since we’ll be saving our data to a Mongo DB.

Finally, the application module will have a pom.xml (below), pointing to the parent pom.xml (above). It will also have a dependency on spring-boot-starter-web— as we’ll be creating REST endpoints on it—and a dependency on our persistence module:

Build an Application Without Java Modules

The presence of module-info.java in an application’s source root defines that it is using Java modules. You will first build the application without JPMS and enable it in a later step.

Create a class Bird in the persistence module in persistence/src/main/java/com/okta/developer/animals/bird/Bird.java. This will represent the entity that we’ll be saving to DB.

Now we’re going to create a repository to save this entity to DB. Spring Data MongoDB does this for us automatically, creating the CRUD operations so all we have to create is an interface extending MongoRepository. Create this class in persistence/src/main/java/com/okta/developer/animals/bird/BirdRepository.java:

Add a controller to expose REST operations on the Bird classes This class will be stored on application/src/main/java/com/okta/developer/BirdController.java

At this point, the application is functional and can be run. Start a MongoDB instance using the following docker command:

Then, go to the project root and run:

If everything goes correctly, you’ll be able to navigate to http://localhost:8080/bird and see a JSON output like this:

Before we move on to using Java modules, it’s time to tune our app and make it secure by adding a single dependency and a couple configuration properties.

Add the following dependency to your application/pom.xml file:

Register an Application on Okta

Once you’re signed into Okta, register your client application.

Configure the App with Okta Information

You can find {clientId} and {clientSecret} on the General tab of the Okta application you just created: 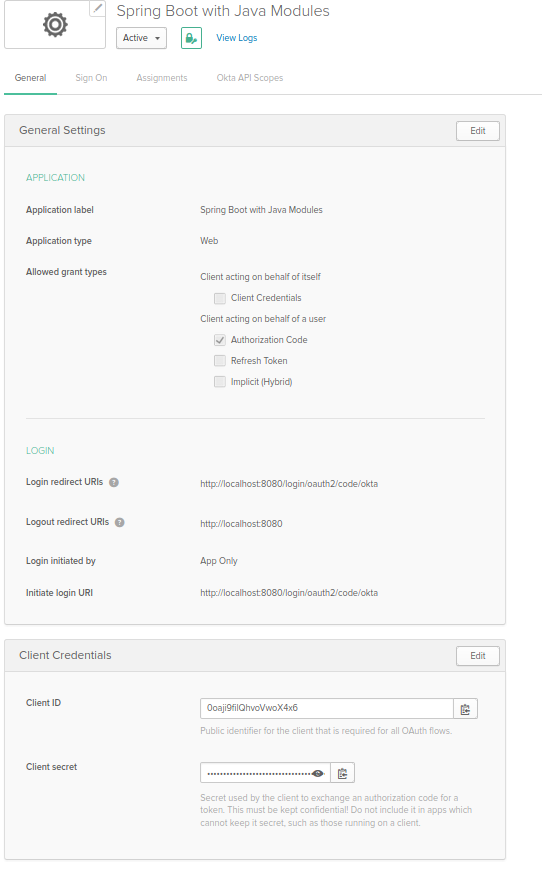 You can find {yourOktaDomain} on your Okta dashboard:

If you restart the app and navigate to http://localhost:8080/bird in an incognito/private browser window, you’ll see a login page.

Now it is time to modularize the app. This is achieved by placing a file module-info.java in each project’s source root (src/main/java). We’ll be doing this for both our modules: application and persistence. There are two ways to modularize a Java app—top-down and bottom-up. In this tutorial we’ll be showing the bottom-up approach; modularizing the libraries before the app. This approach is preferable as we’ll have persistence already modularized when writing the application and module-info.java. If application was modularized first then persistence would be treated as an automatic module and you would have to use the JAR file name for the module name.

Create a module declaration file persistence/src/main/java/module-info.java with the following content:

Each requires keyword signalizes that this module will be depending on some other module. Spring (version 5) is not modularized yet, its JAR files don’t have the module-info.java. When you have a dependency on the modulepath (formerly the classpath for non-modular applications) like this they will be available as automatic modules.

An automatic module derives its name using a two-step process:

In Spring 5, the Automatic-Module-Name metadata was added to all Spring libraries, if/when Spring defines module-info, the metadata in your application does NOT need to change.

The exports keyword exports all classes in that package. When another module uses a requires clause referencing that package, it will have access to the package classes.

In this example, the module is exporting all classes under the com.okta.developer.animals.bird package.

Create a module declaration file application/src/main/java/module-info.java with the following content:

This one is similar to the first but, along with the Spring dependencies, we also have the com.okta.developer.modules.persistence dependency.

Go to the project root and run

If everything is operating correctly you’ll be able to login and navigate to http://localhost:8080/bird where you’ll see JSON output.

The Java Modular System is an excellent addition to the Java ecosystem. It helps organize and isolate classes that were otherwise needlessly exposed. By looking at the application module-info.java, you can see a blueprint of the application dependencies.

This topic is broad and, if you want to learn more, this talk by Alex Buckley is an excellent start.

If you have an existing Spring Boot application that you’d like to have use the modular system, this other talk by Jaap Coomans will help you out.

You can learn more about securing Spring applications in these posts:

Published at DZone with permission of Bruno Leite. See the original article here.