Back in 2013, a feature was released on GitHub that let users scan code in public repositories. Almost immediately, it was partially deactivated. People suspect that the reason for this was that the feature exposed all kinds of secrets. Then, in 2014, 50,000 uber drivers had their information stolen. This happened because a hacker accessed Uber’s database using credentials they got from a public GitHub repository. The following year, Hashicorp Vault (a tool for managing secrets and encrypting data in transit) was announced. And, two years after that, Spring Vault (the integration of Spring and Vault) came into being.

While this may seem like old news at this point, the leakage of secrets is still pervasive today. It happens to a whole host of developers (see this study from NC State University). This exposure of secrets leads to more cyber-attacks, loss or corruption of data, breaches, and crypto-jacking (cryptocurrency mining using a victim’s cloud computer power). Hashicorp’s Vault and Spring Cloud Vault can reduce this risk.

Since it’s not recommended to store secret values in code, this tutorial will offer these alternatives:

Use Environment Variables for Secrets; a Precursor to Spring Vault

Spring Boot applications can bind property values from environment variables. To demonstrate, create a vault-demo-app with OpenID Connect authentication, using the Spring Initializr. Then add web, okta, and cloud-config-client dependencies, some of which will be required later in the tutorial:

Unzip the file and open the project. Modify its src/main/java/.../Application.java class to add the / HTTP endpoint:

For the Okta authentication set up, register for a free developer account. After you log in, go to API > Authorization Servers and copy your Issuer URI into a text editor.

Then go to Applications and create a new Web application. Configure it as follows:

Click Done and copy the Client ID and Client secret into a text editor for later.

Instead of storing Okta credentials in application.properties, Spring Boot allows you to bind properties from environment variables. You can see this in action by starting your application with the Maven command below:

In an incognito window, go to http://localhost:8080. Here, you should see the Okta login page: 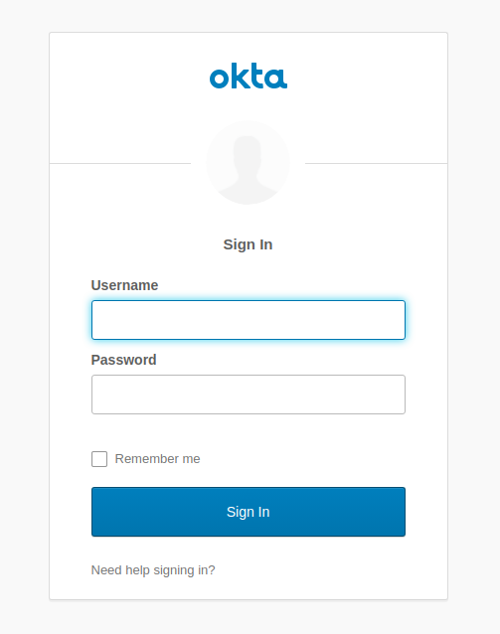 In microservice architectures, managing configuration with a centralized config server is essential. Secret encryption is desirable at rest and when in transit. Spring Cloud Config Server is a popular implementation. Let’s configure the server to store encrypted secrets.

NOTE: To use encryption and decryption features in Java 8, you must install the Java Cryptography Extension (JCE) in your JVM, which is not included by default. Otherwise, the requests to the /encrypt endpoint in the config server will fail with “Illegal key size”.

Start the server, as you are going to encrypt your Okta secrets using the /encrypt endpoint. For this example, you are using a symmetric (shared) encryption key, passed through the environment variable ENCRYPT_KEY. Before running the command below, you should replace {encryptKey} with a random string of characters.

Then, in another terminal, encrypt your client ID and secret.

In the vault-config-server project folder, create a src/main/resources/config/vault-demo-app-dev.yml file to store the secrets for the dev profile, with the following contents:

The client-id and client-secret encrypted values must be prefixed with {cipher}. Restart the config server.

To consume the config server properties, the client application must set the server address in the bootstrap properties. In the vault-demo-app project folder, create the file src/main/resources/bootstrap.yml with the following content:

When requesting http://localhost:8080 it should again redirect to the Okta login.

In a real environment, the config server should be secured. Spring Cloud Config Server supports asymmetric key encryption as well, with the server encrypting with the public key, and the clients decrypting with the private key. However, the documentation warns about spreading the key management process around clients.

Vault as a Configuration Backend with Spring Cloud Vault

In the cloud, secrets management has become much more difficult. Vault is a secrets management and data protection tool from HashiCorp that provides secure storage, dynamic secret generation, data encryption, and secret revocation.

Vault encrypts the secrets prior to writing them to persistent storage. The encryption key is also stored in Vault, but encrypted with a master key not stored anywhere. The master key is split into shards using Shamir’s Secret Sharing algorithm, and distributed among a number of operators. The Vault unseal process allows you to reconstruct the master key by adding shards one at a time in any order until enough shards are present, then Vault becomes operative. Operations on secrets can be audited by enabling audit devices, which will send audit logs to a file, syslog or socket.

As Spring Cloud Config Server supports Vault as a configuration backend, the next step is to better protect the application secrets by storing them in Vault.

Pull the Vault docker image and start a container using the command below. Make sure to replace {hostPath} with a local directory path, such as /tmp/vault.

NOTE: The docker run command above will start a vault instance with the name my-vault. You can stop the container with docker stop my-vault and restart it with docker start my-vault. Note that all the secrets and data will be lost between restarts, as explained in the next paragraphs.

IPC_LOCK capability is required for Vault to be able to lock memory and not be swapped to disk, as this behavior is enabled by default. As the instance is run for development, the ID of the initially generated root token is set to the given value. We are mounting /vault/logs, as we are going to enable the file audit device to inspect the interactions.

Once it starts, you should notice the following logs:

It is clear Vault is running in dev mode, meaning it short-circuits a lot of setup to insecure defaults, which helps for the experimentation. Data is stored encrypted in-memory and lost on every restart. Copy the Unseal Key, as we are going to use it to test Vault sealing. Connect to the container and explore some vault commands:

The command above will start a shell session with the container. After the prompt shows, run the following three commands:

The status command output shows if the vault instance is sealed:

As you can see, in development mode Vault starts unsealed, meaning stored data can be decrypted/accessed.

Enable a file audit device to watch the interactions with Vault:

You should see a success message. Now store the Okta secrets for the vault-demo-app:

As illustrated above, key-value pairs are stored with kv put command, and you can check the values with the kv get vault command.

Check vault_audit.log in your specified {hostPath} directory. Operations are logged in JSON format by default, with sensitive information hashed: 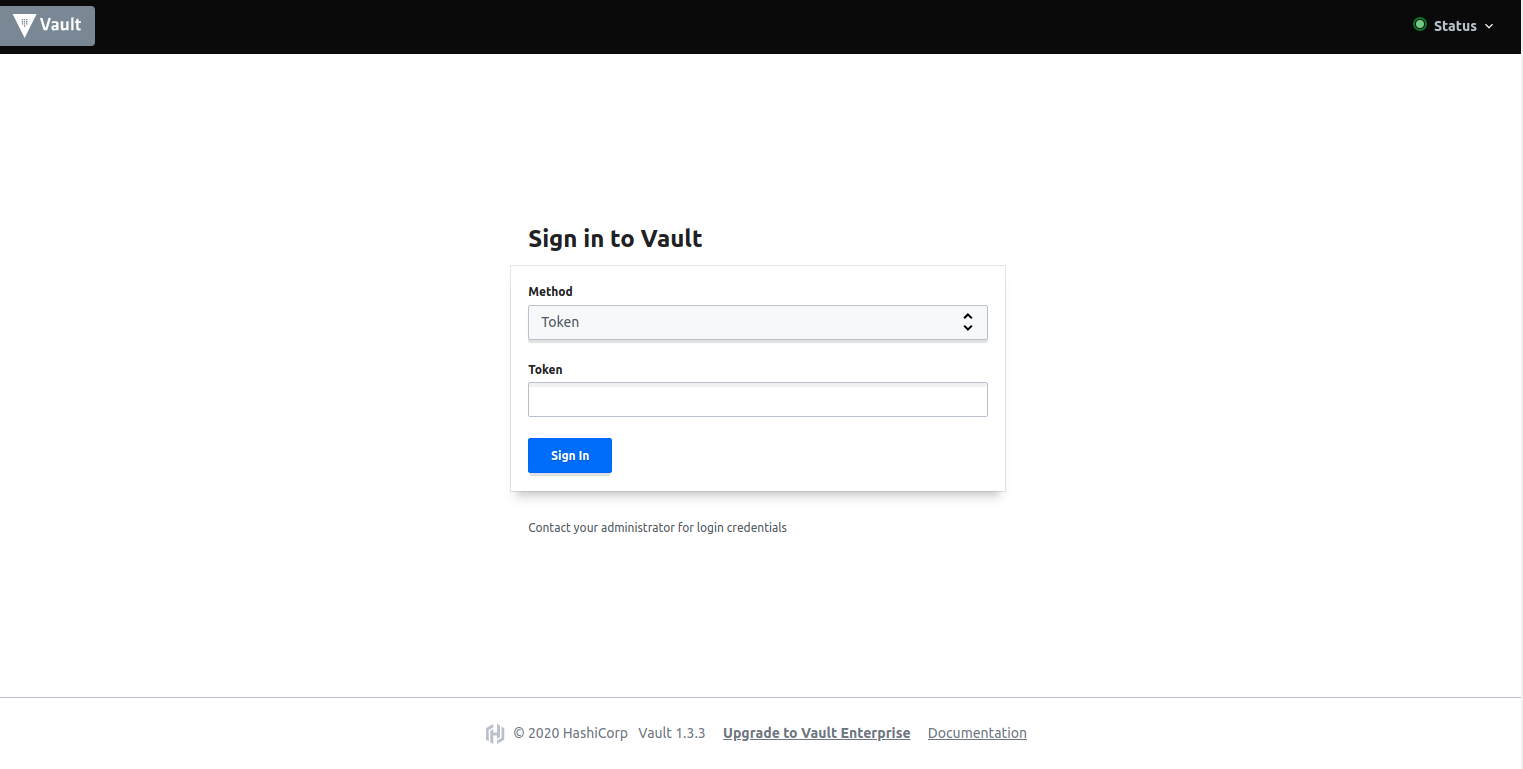 Next, go to Policies and Create ACL policy. Create a vault-demo-app-policy with the following capabilities:

All the paths above will be requested by the config server to provide configuration for the vault-demo-app when it starts with the dev profile active. 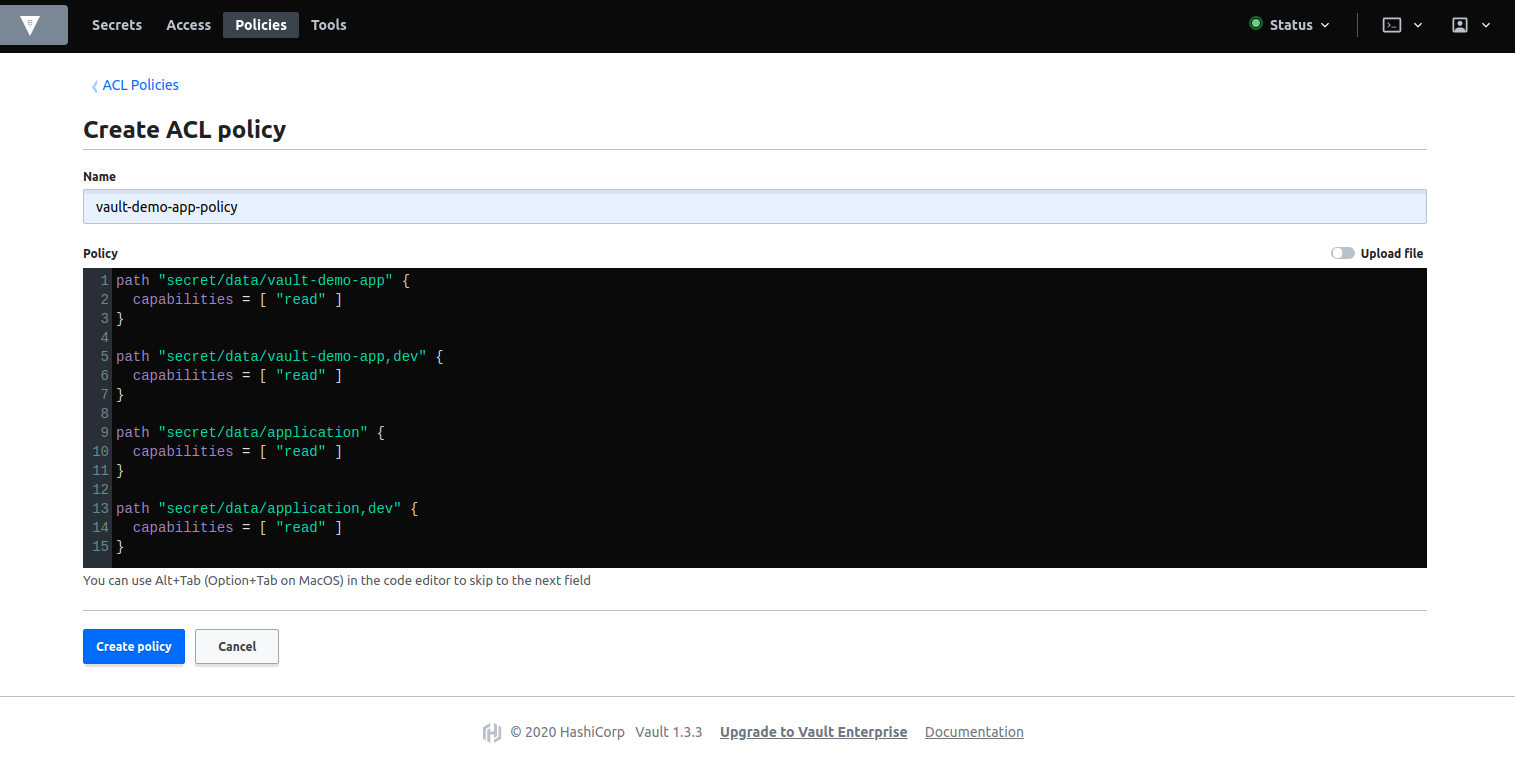 Now, go back to the container command line, and create a token with the vault-demo-app-policy.

You are now ready to update the config server. In the vault-config-server project, edit src/main/resource/application.yml to add Vault as the config backend:

Note that the logging level is set to TRACE to see the interaction between the server and Vault. Restart the vault-config-server.

You should see the logs below if the server was configured correctly:

You will not see the config server trying to connect to Vault in the logs. That will happen when a config client requests the properties. Start the vault-demo-app, passing the token just created in the environment variable SPRING_CLOUD_CONFIG_TOKEN. For example:

To increase logging so you see the above message, add the following to application.properties

Go to http://localhost:8080 and verify that authentication with Okta works.

Finally, let’s seal Vault. Sealing allows you to lock Vault data to minimize damages when an intrusion is detected. In the container command line,

Restart vault-demo-app and verify the configuration will not be retrieved as Vault is sealed. The vault-config-server logs should read:

Hopefully, you see the benefits of using a secrets management tool like Vault as a configuration backend, as opposed to storing secrets in a file, on a file system, or in a code repository. To learn more about Vault and Spring Cloud, check out the following links:

We have several related posts about encryption and storing secrets on this blog.

You can find the code for this tutorial at GitHub.