Inferno JS is a blazing-fast, lightweight, React-like JavaScript library. React developers will find it comfortably familiar. Inferno JS also supplies better performance, smaller size, and other improvements. Inferno is highly modular and unopinionated, encouraging developers to add only the pieces we require and write code to suit our personal preferences. In this tutorial, we'll introduce the Inferno JavaScript library, then build a simple Inferno app and authenticate it with Auth0. The final code can be found at the inferno-app GitHub repo.

Inferno is a fast, lightweight JavaScript library that resembles React. Minified and gzipped, Inferno weighs in at only 8kb (React gzipped is over 40kb). It's also extremely performant in benchmarks as well as real-world applications. Inferno can render on both the client and server and at the time of writing, it is the fastest JavaScript UI library that exists.

These features are very attractive, but many JavaScript developers are overwhelmed by the number of libraries and frameworks already out there. A few tools have emerged as mindshare and usage leaders, React among them. So what are the reasons behind Inferno's creation? Who should use Inferno and why?

Why Was Inferno JS Created?

Inferno's author, Dominic Gannaway, wanted to examine whether a UI library could improve experience for web apps on mobile devices. This included addressing issues that existing UI libraries had with battery drain, memory consumption, and performance. Inferno builds on the same API as React to greatly diminish the barrier to entry and take advantage of the best features of React. The result was a lightweight and incredibly performant UI library that React developers will find delightfully familiar but also improved.

Inferno has many features, including but not limited to:

You can read more about the features of Inferno and how Inferno works in the Inferno GitHub README and an indepth Inferno interview with Dominic Gannaway on the SurviveJS blog.

Note: I strongly recommend reading the interview article. It provides the technical details of Inferno, how it works, and how it compares to similar libraries like React and Preact.

Inferno is in beta at the time of writing, but the first final release is imminent. The Inferno team intends to publish at the end of 2016 / early 2017. This release will include version 1.0 of the Inferno JS library as well as the launch of the official Inferno website and documentation.

Who Should Use Inferno?

"Inferno is a great library for building UIs for mobile where performance has been poor in other libraries and people are looking around for alternatives." —Dominic Gannaway

Because Inferno is built on the same API as React, developers gain several adoption advantages when learning or switching to Inferno:

For learning Inferno, Dominic Gannaway recommends the React courses on egghead.io as well as React tutorials by Wes Bos. In addition, resources such as Auth0's React Quick Start and Secure Your React and Redux App with JWT Authentication can offer insight into managing authentication with Inferno.

Developers can get started easily with Inferno with the create-inferno-app project. This is a fork of create-react-app and sets up boilerplate for developing, testing, building, and serving an Inferno app.

Set Up an Inferno App

Now that we've learned a little bit about Inferno, let's build a simple app that calls an API to get a list of dinosaurs. We'll be able to click a dinosaur's name to display more information. Let's get started!

We'll need Node.js (with npm) installed globally. If you don't have Node already, download and install the LTS version from the Node.js website.

Let's scaffold a new Inferno project with create-inferno-app. Navigate to a folder of your choosing and run the following commands to create a new app and start the local server:

The app can now be accessed at http://localhost:3000 and should look like this in the browser: 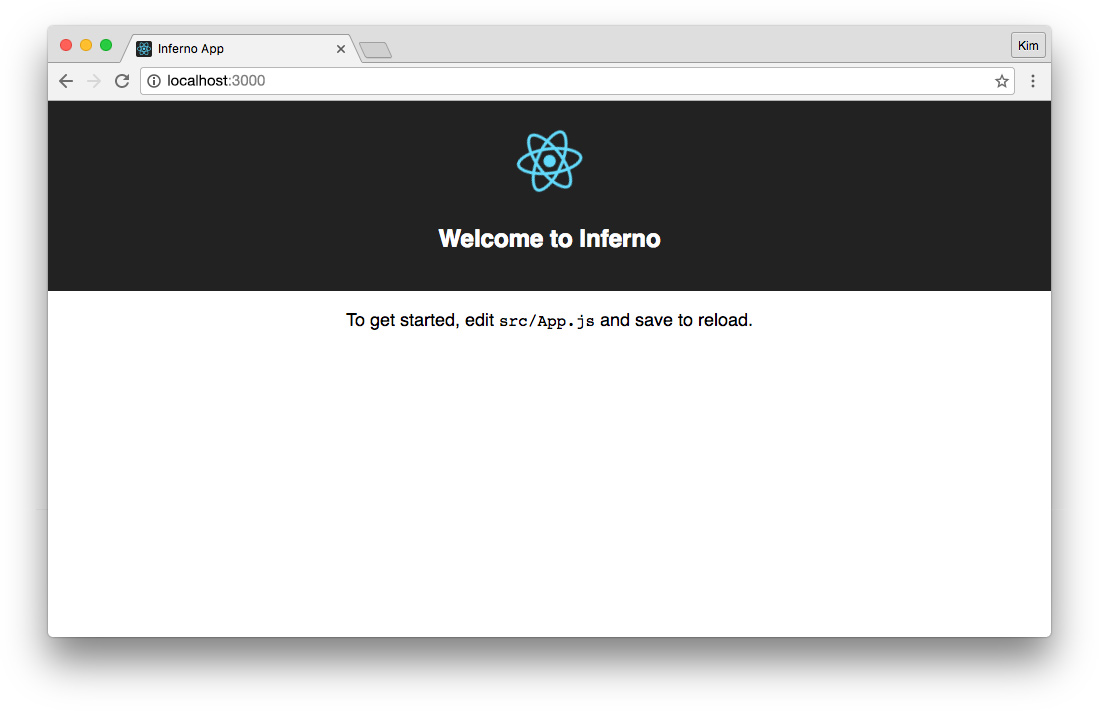 To style our components quickly, let's use Bootstrap. Version 3 is the latest stable release at the time of writing. We'll use npm to install Bootstrap:

Import the Bootstrap CSS file in the src/index.js file to make it available in the application:

Our app needs an API. Let's clone sample-nodeserver-dinos in the root of our Inferno app and then rename the repo folder to server. Then we'll execute npm install to install the necessary dependencies to run our API.

Note: The command to rename files or folders is mv on Mac/Linux or ren on Windows.

Our Inferno app runs on a local development server at localhost:3000 and the dinosaur API runs on localhost:3001.

Note: For brevity, we're going to run the app by launching the API server and app server in separate command windows. However, if you'd like to explore running multiple processes concurrently with one command, check out this article: Using create-react-app with a Server.

Call a Node API in an Inferno App

Let's start our API server. From the server folder, run:

To call our API, we can build a service to fetch data. App components can then use this service to make API requests. Let's create a new folder: src/utils. Inside this folder, make a new file and call it ApiService.js:

The fetch API makes HTTP requests and returns promises. We want to create methods to GET the full list of dinosaurs as well as GET an individual dinosaur's details by ID. We'll make sure the response is valid, handle errors, and then export the getDinoList() and getDino(id) methods for our components to use.

Now we need to call the API from a component so we can display the list of dinosaurs in the UI. Open the src/App.js file. This has some boilerplate in it that we can delete and replace:

If you have React experience, this should look familiar. If you're new to React and Inferno, please check out the React docs to learn about general syntax, state and lifecycle, JSX, and more.

In the componentDidMount lifecycle hook, we'll call our ApiService to get an array of all dinosaurs. We'll set state for our dinosaur array on success and error on failure. In the render(), we can pass props (there are none in this case) and state as parameters so we don't litter our render() function with this. For example, this way we can use state.dinos instead of this.state.dinos.

Now that we've replaced the boilerplate JS, let's delete everything in src/App.css and replace it with the following: 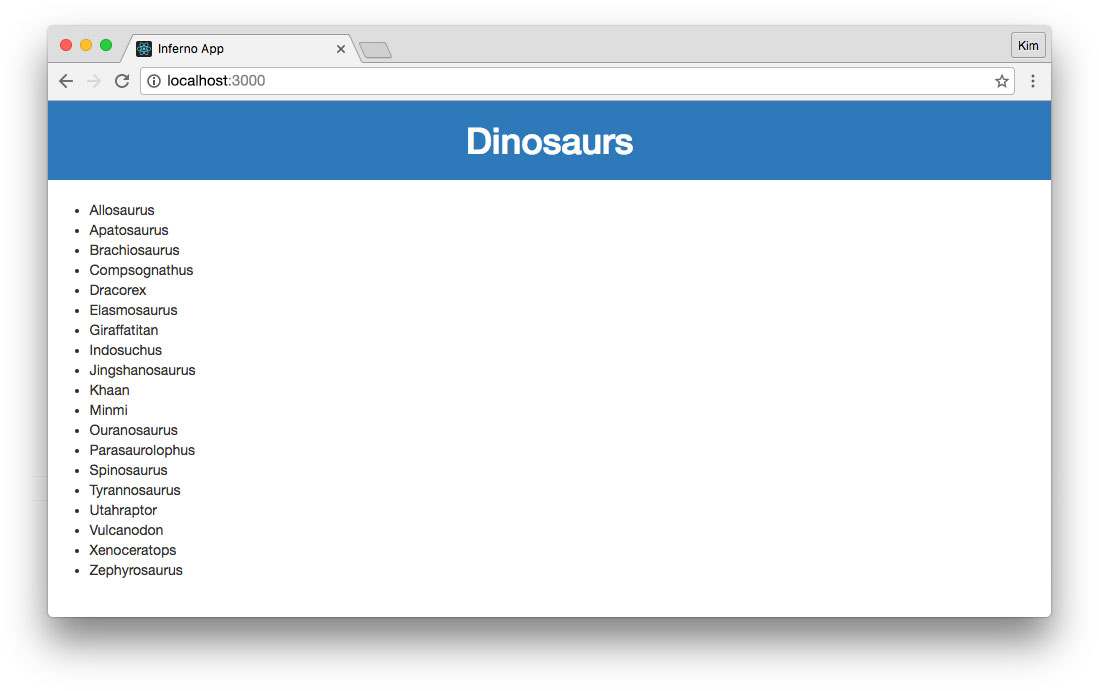