In my role as a Sales Engineer here at InfluxData, I get to talk to a lot of clients about how they're using InfluxDB and the rest of the TICK Stack. We have a large number of very big clients using InfluxEnterprise for metrics collection, analysis, visualization, and alerting in their DevOps area, so we've done a lot of scale-out testing for these clients. In these tests, we see very linear scale-out as we add additional nodes to an InfluxEnterprise Cluster. I'll talk about this in my next blog post.

Over the last six months, I've seen more and more large manufacturers, energy companies, and utilities coming to us for collecting metrics from their IoT devices. Many times, they're working with consulting companies that specialize in building IoT solutions, and these companies bring InfluxDB into the solution because we're so well-suited for time series applications.

A few things I've noticed with these IoT applications is that many times, there is a need for a local instance of InfluxDB running in the factory and alerting locally on anything they're monitoring. In these cases, the equipment they have to run on is pretty lightweight, so it's just as important to understand how we scale down as it is to understand how we scale up. The other thing is that the cardinality of the data can be rather large compared to the amount of data to be ingested. So, I thought I'd do some scale-down testing, as well as measure the impact of cardinality on write throughput.

That's what this blog post is about. It's the first of a series I'm doing on performance testing of InfluxEnterprise. So if you're interested in this topic, stay tuned.

For the purposes of this test, I'll be spinning up a cluster in AWS using some utilities we've built to make this easy. If you haven't worked with InfluxData's TICK Stack before, you'll be surprised how easy it is to install and set up. In fact, one of my peers, David Simmons, wrote another post on that topic. Check it out!

For running InfluxDB on AWS, we've found that the R4 type of instances that are optimized for memory-intensive applications work best. These also use SSD storage, which is recommended for your data, wal, and hh directories when running InfluxDB or InfluxEnterprise.

For the testing, I'll be spinning up the following size clusters on AWS:

For Part 2 of this series, I'll also scale out to 4, 6, 8, and 10 node clusters and increase cardinality to show how well InfluxEnterprise scales horizontally.

To generate data for testing with the correct granularity, I'll be using a utility developed by one of our engineers called inch, which stands for INflux benCHmarking. This is an awesome utility for simulating streaming data for benchmarking purposes. It's written in Go and is available out on GitHub. If you type inch -h, you'll get help on using the utility. I've listed the options below:

Using inch, I'll generate data from two client nodes running on AWS m4.2xlarge nodes that have 8 cores each and 32 GB of memory. I'll be running 8 streams on each client for a total of 16 concurrent writers.

The difference in performance was minimal scaling up to 32 writers, so I decided not to include the numbers.

In summary, I'll use the following constants for my testing:

For this test, I'm only using 2 node clusters that provide high availability, but since we're replicating writes across both nodes in the cluster, I'm not testing scale-out horizontally. In fact, due to cluster overhead, this performance would be slightly less than you'd expect on a single node of InfluxDB. Since most of our customers want high availability and InfluxDB provides a very high ingest rate even on smaller servers, this is a common configuration we see.

After spinning up the cluster on AWS, the first thing I did was create my database with a replication factor of 2. I called my database stress and used the CLI to create it:

Next, I logged into my client nodes and entered the following inch commands to start generating my workload for the 10,000 unique series test:

Now, let me explain the command line options for the above inch commands. -v tells inch to print out detailed stats as it's running so I can see how many points have been written, the ingest ratem and other details about the test. -c tells inch how many write streams to run concurrently. I'm running 8 each, so 16 concurrent write streams total. -b allows me to set the batch size. A batch size 5,000 to 10,000 is recommended for InfluxDB, so I chose 10,000. -t  allows me to define the shape of my data; in other words, the number of tags and how many unique values to generate for each tag. Client one generated 3 tags, the second one having 5,000 unique values, and client two generated 3 tags, with the third one having 5,000 unique values for a combined 10,000 unique values overall. -p indicates how many points to generate per series and the -consistency option allows me to set my write consistency, which I set to any.

Here is a sample of what the generated data looks like: 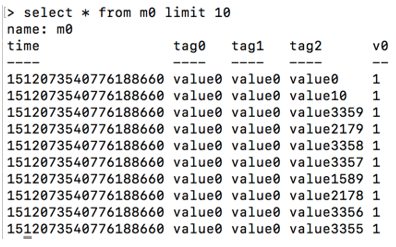 So here are the results of my testing. As you can see, vertical scaling as I tested on systems with more cores was very linear. Also, as the cardinality increased, it definitely had an impact on the ingestion rate, and I found that there is a performance hit as new series are created for the first time. But then, once all the series are created, ingestion performance levels off to the rates you can see in the chart below. 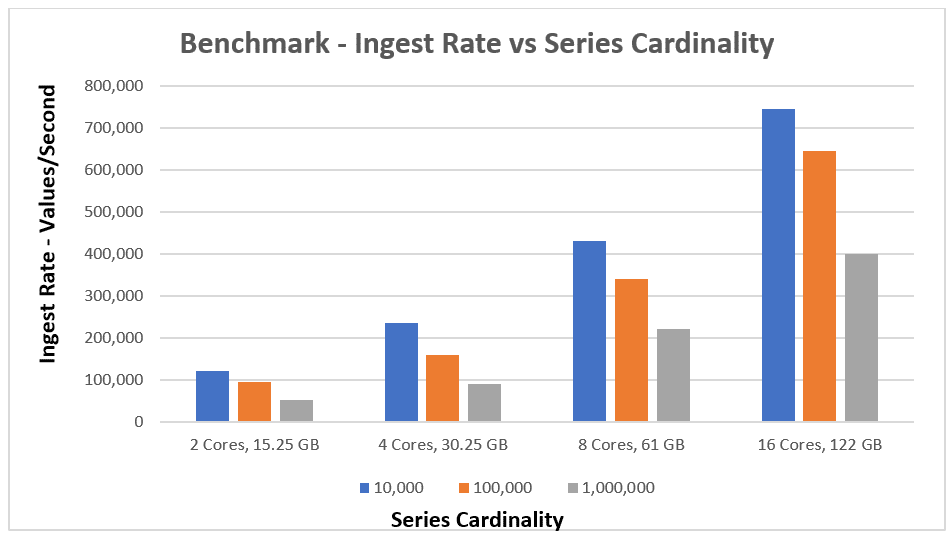 I was pleasantly surprised ny how much data a cluster with 2 core nodes could handle since many IoT use cases have minimal size servers at the edge of the network where there's sometimes a need to have some local storage, visualization, and alerting.

If you'd also like to see some comparison benchmarks of InfluxDB vs. OpenTSDB, ElasticSearch, Cassandra, or Mongo, check out these other benchmarks that have been run.