If you’re one of the 35 percent of US adults who use Instagram, you may have awoken Wednesday morning to a bit of a shock: Follower counts across the platform had dropped overnight, with some of the more prolific users losing millions. While many at first speculated that this dramatic reduction was due to yet another round of bot purges, Instagram soon confirmed that a bug was the real culprit.

While this story may at first seem trivial – is it really such a huge deal that Selena Gomez’s depleted follower numbers led to Ariana Grande being crowned the new Instagram pop queen? – it does bring a much more important issue back to the forefront, one posed just last September by cybersecurity expert Raj Goel:

“They’re still taking a technical approach to a social problem,” Goel explained on CNBC’s Closing Bell. “In software, bugs are accepted. You have a bug, no big deal, we'll fix it in the next release. With a media platform … there is no room for bugs." 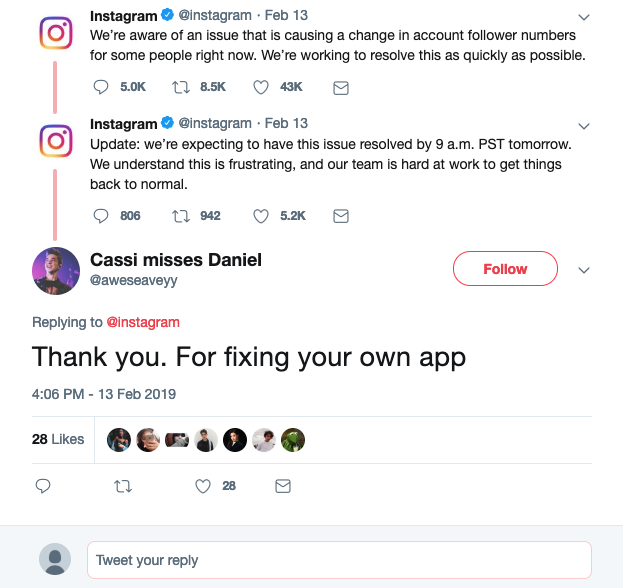 The uproar from Instagram users over this latest bug certainly speaks to a problematic dependency on such platforms, but it’s not the only concern that merits discussion. Indeed, when we pan out from this specific instance and see it in context, the real magnitude of the issue becomes clear: It is but one small piece of a much larger and troubling pattern.

Just last December, for example, Google announced that it would be shutting down its own social network Google+ months earlier than expected because it had identified the second in a series of devastating security bugs. While the first bug, announced the previous October, had allowed developers to access the private profile data – including usernames, email addresses, and occupations – of 500,000 users, the second was vastly more far-reaching: This bug gave developers using one of the company’s APIs access to the private profile information of 52.5 million users. While Google asserted that they found no evidence of any informational misuse stemming from the incident, the writing was already on the wall.

Around the same time, Facebook announced its own bug-related data-access snafu. In an official statement, the company explained, "Our internal team discovered a photo API bug that may have affected people who used Facebook Login and granted permission to third-party apps to access their photos. We have fixed the issue but, because of this bug, some third-party apps may have had access to a broader set of photos than usual for 12 days between September 13 to September 25, 2018."

This announcement came a mere few months after the company identified a separate bug that had changed the default audience setting for 14 million users to “Public” as well as one that enabled blocked users to see private content, a glitch affecting 800,000 users.

These bugs have driven some experts, like Dipayan Ghosh, former privacy and public policy advisor at Facebook, to advocate for increased governmental regulation of these platforms, especially in the wake of how these companies all-too-often handle their announcements and resolutions. Google+, for example, reportedly took months to disclose its coding woes out of fear of public backlash, and even Instagram has yet to confirm that its bug has been satisfactorily addressed. As Ghosh argued back in September on the same Closing Bell segment as Goel, “If this kind of trend continues, if the industry keeps on withholding information from the public and being very reticent in their dealings with government, then we're going to need public interest to rise up, we're going to need the government to come in and swing the ax down."

While it is unclear whether the government ever will step in and demand greater transparency from these companies that so profoundly impact our lives, perhaps we won’t need them to. Don’t we all still have the choice to disengage if we so desire? According to the Pew Research Center, after all, 59 percent of Americans claim they could rather easily stop using these sites.

Never mind the research that suggests we are, in fact, hormonally hard-wired to become addicted to such engagement. And never mind how virtually every element of our lives is now touched by social media in some way.

We could absolutely go back to how things were before.