As a bird’s eye view, Apache ZooKeeper has been leveraged to get coordination services for managing distributed applications. It holds responsibility for providing configuration information, naming, synchronization, and group services over large clusters in distributed systems. To consider as an example, Apache Kafka uses ZooKeeper for choosing their leader node for the topic partitions.

The key concept of ZooKeeper is the zNode, which can be acted either as files or directories. ZNodes can be replicated between servers as they are working in a distributed file system. Znode can be described by a data structure called stats and it consolidates information about zNode context like creation time, number of changes (as version), number of children, length of stored data or zxid (ZooKeeper transaction ID) of creation, and last change. For every modification of zNodes, its version increases.

The zNodes are classified into three categories:

Persistence zNode is alive even after the client, which created that particular zNode, is disconnected. Also, they survive after ZooKeeper restarted.

Sequential zNodes can be either persistent or ephemeral. Once a new zNode is created as a sequential zNode, then ZooKeeper sets the path of the zNode by attaching a 10-digit sequence number to the original name. The sequential zNode can be easily differentiated from the normal zNode with the help of different suffixes. The zNodes can have public or more restricted access. The access rights can be managed by special ACL permissions. 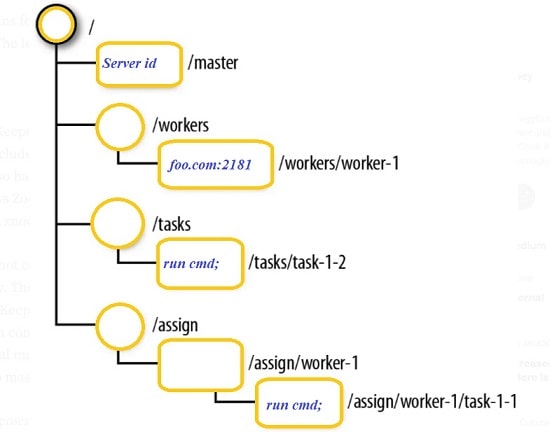 The client can easily receive notifications about changes to the ZooKeeper ensemble through watches. The clients are able to set watches while reading a specific zNode. Any time a zNode (on which the client registers) changes, watches notify the registered client. Data associated with the zNode or changes in the zNode’s children are referred to as “zNode changes.” Watches are only activated once. A client must perform a second read operation if they want a notification again. The client will be disconnected from the server and the associated watches will also be removed when a connection session expires. The watches registered on a zNode can be removed with a call to removeWatches. Also, a ZooKeeper client can remove watches locally even if there is no server connection by setting the local flag to true.

It refers to the bare minimum of server nodes that must be operational and accessible to client requests. For a transaction to be successful, any client-generated updates to the ZooKeeper tree must be persistently stored in this quorum of nodes. Using the formula Q=2N+1, where Q is the number of nodes required to form a healthy ensemble and N is the maximum number of failure nodes, quorum specifies the rule for forming a healthy ensemble. The above formula can be considered to decide what is the safest and optimal size of a quorum. The ensemble can be defined simply as a group of ZooKeeper servers. The minimum number of nodes that are required to form an ensemble is three. A five-node ZooKeeper ensemble can handle two node failures because a quorum can be established from the remaining three nodes as per the formula Q=2N+1.

The following entries can be defined as the quorum of ZooKeeper servers and must be available in the zoo.cfg file located under “conf directory.”

Transaction in Apache ZooKeeper is atomic and idempotent and involves two steps namely leader election and atomic broadcast. ZooKeeper uses ZooKeeper Atomic Broadcast (ZAB), a unique atomic messaging protocol. Because it is atomic, the ZAB protocol ensures that updates will either succeed or fail.

Transactions are stored in local storage on ZooKeeper servers. The ZooKeeper Data Directory contains snapshots and transactional log files, which are persistent copy of the zNodes stored by an ensemble. The transactions are logged to transaction logs. Any changes to zNodes are appended to the transaction log and when the log file size increases, a snapshot of the current state of zNodes is written to the file system. 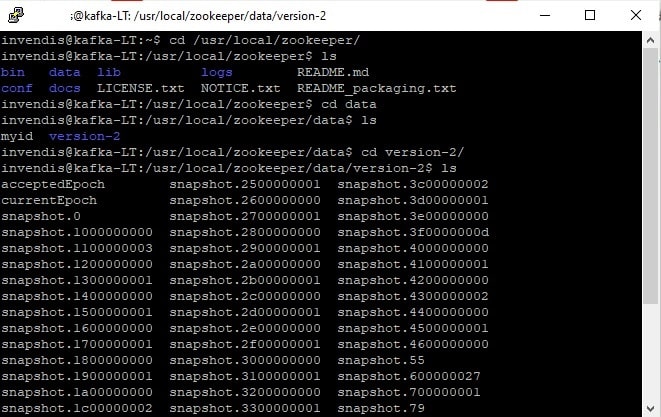 The ZooKeeper tracks a fuzzy state of its own data tree within the snapshot files. Because ZooKeeper transaction logs are written at a rapid rate, it is critical that they be configured on a disk separate from the server’s boot device. In the event of a catastrophic failure or user error, the transactional logs and snapshot files in Apache ZooKeeper make it possible to recover data. Inside the zoo.cfg file available under the “conf directory” of the ZooKeeper server, the data directory is specified by the dataDir parameter and the data log directory is specified by the dataLogDir parameter.