Internal Development Platform (IDP) is a brand new word in DevOps and product development. In this article, I’m explaining:

What Is an Internal Developer Platform?

As a software architect, I design the DevOps processes and spend much time selecting the DevOps toolset, building pipelines, and communicating with the DevOps team to implement some procedures for the development team. We can solve this with the internal development platform (IDP).

An internal developer platform(IDP) is an additional layer between development and DevOps teams. The main idea behind the IDP is to remove the dependency between DevOps and developers.

Let’s look at what functions and components you should include in the IDP. The IDP platform should provide the following:

Let’s have a look at what is the IDP from insights and how it is connected with DevOps tools and cloud providers.

The diagram below shows the example of the IDP components and how they combine DevOps tools and cloud providers.

Let’s see what options of developer platforms are on the market. For example, Gimplet.IO is an open-source IDP that focuses primarily on operating Kubernetes deployments. Gimlet contains CLI to manage charts, deployments, secrets, and GitOps. 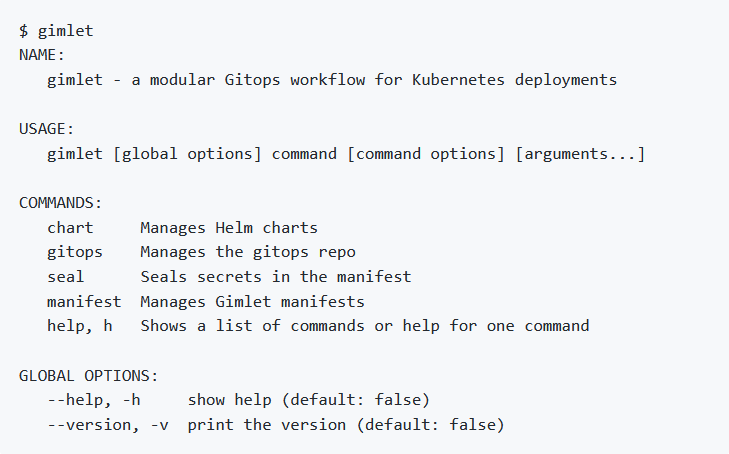 The Gimlet doesn’t contain application configuration management which makes it partial IDP. I like the idea when IDP focuses on specific platforms. For example, Kubernetes. It makes it more stable than other platforms that try to cover all well-known platforms and cloud providers. Covering too many platforms can be suitable for marketing. However, having the proper support of multiple platforms and cloud providers requires significant effort as they have different APIs, standards, and even naming conventions.

Another good example is Upbound. Upbound is a powerful IDP that allows you to deploy and build your application in the Kubernetes cluster. It supports GCP, AWS and the Goolge Cloud. I like how an Upbound team supports the documentation and provides architecture examples and architecture references. Below you can see Azure Reference Architecture for Kubernetes.

There are products like Backstage that made good progress in supporting different platforms. Backstage is an open-source platform made by Spotify and supported by Cloud Native Computing Foundation (CNCF). The Backstage is a platform that is intended to build developer portals. It includes the following components:

The DevOpsBox is an example of a platform that supports numerous DevOps platforms, and Cloud Providers offer application configuration management, infrastructure orchestration, environment management, and adequate RBAC. However, many cloud providers and tools are still in the implementation phase — for example, Azure and Google Cloud. 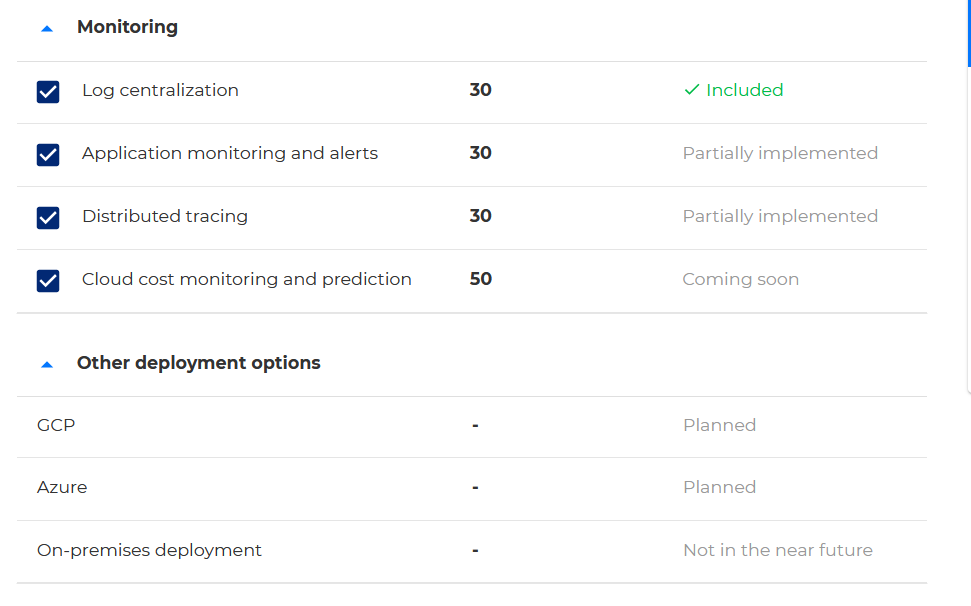 And last but not least is a Humanitec. It is a platform that connects multiple GitOps tools and Cloud platforms. I like the concept that Humanitec brings. For example, you can connect one or several Kubernetes clusters over Azure and AWS. Connect Datadog and Grafana. You can even reuse your existing Terraform and Pulumi scripts. You can operate this infrastructure via CLI, API, and developer-focused UI. Developers can quickly provision Kubernetes clusters, spinup databases, and VM instances without writing pipelines manifest, and Terraform scripts.

They don’t have to wait for the DevOps team when they provide this one. However, DevOps specialists still should spend time on:

Many enterprise companies like Spotify are building their own IDP. They already have a massive DevOps code base that includes scripts and templates, pipelines for the most available platforms, and cloud providers.

A few years ago, I was working for an enterprise company with 500+ ongoing projects, and they needed to set up a team for the new project quickly. All projects need to provide infrastructure ASAP. The developer had no time to do DevOps stuff. The company asked to build Internal Developer Platform (IDP) to provision and manage infrastructure. The idea is simple. When a new project appears, the algorithm should be the following: 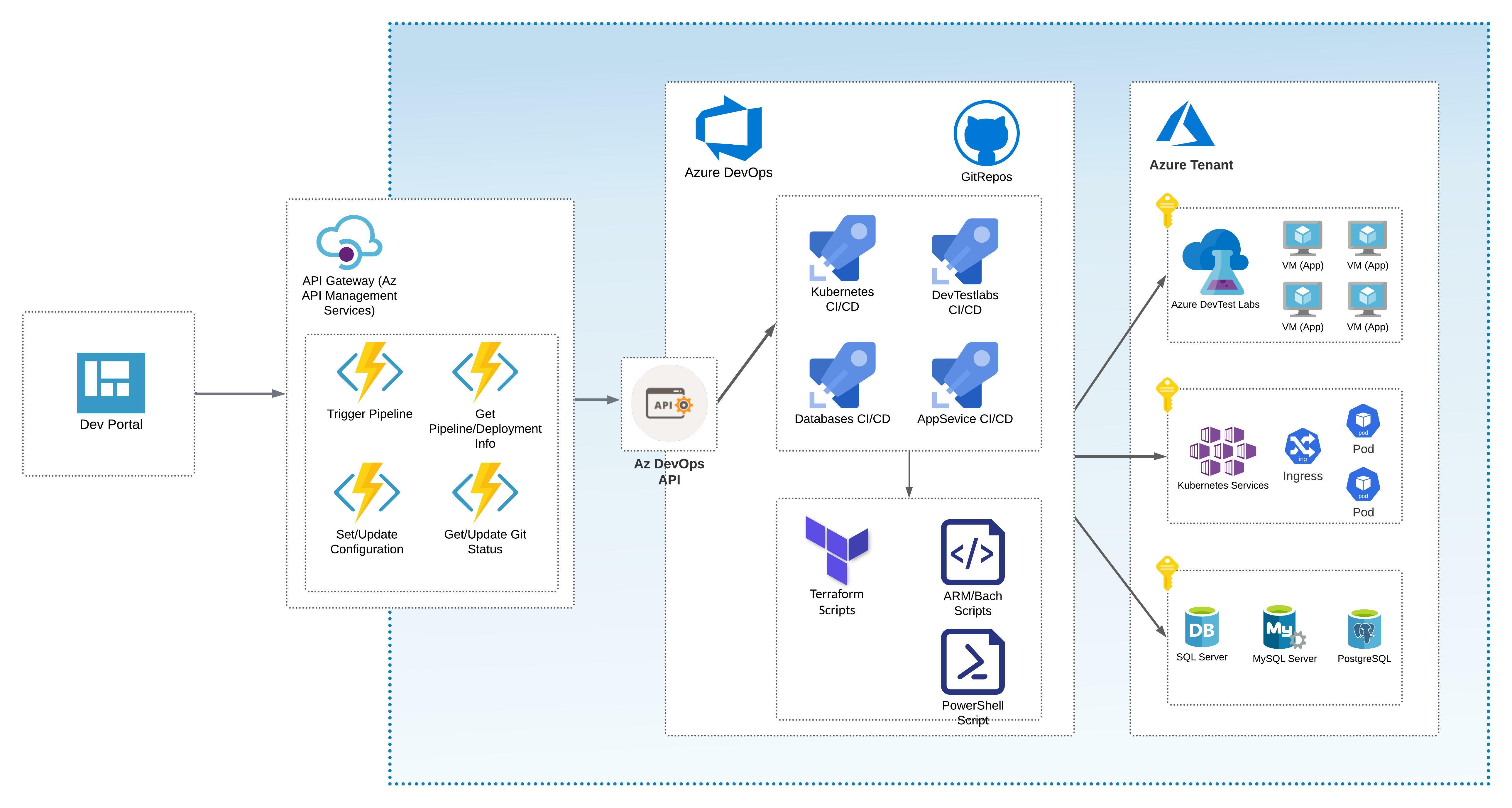 As you can see, the architecture is primarily based on the Azure stack. However, you can easily extend it to use in AWS, GoogleCloud, or any other cloud provider. The IDP can provide the following resources and applications:

A developer portal is a simple ReactJs application that uses an internal API. The API is based on Azure API management and contains several functions representing a single API call. For example, to trigger deployment or receive deployment status. The API layer is connected to the Azure DevOps API. The Azure DevOps contains YAML pipelines, Terraform, Bash, and PowerShell scripts.

An IDP provides you with the following benefits:

IDP can bring value to the product. However, there are some drawbacks involving IDP. Below I’ve listed some of them:

The list can be endless and may require its own article. Here I’ve tried to clarify what is an internal developer platform and how you and your organization can benefit from involving IDP. Also, I’ve added points about why using IDP may be not reasonable. Also, I’ve shared the architecture example demonstrating how an organization can build its IDP and save time managing several DevOps teams across the company.

Published at DZone with permission of Boris Zaikin. See the original article here.