In this article series, we are discussing Elasticsearch. In Part 1, we will start with an introduction of Elasticsearch and then will have a brief discussion of the so-called ELK stack. In Part 2, we will then move to the architecture of Elasticsearch and what the heck nodes are, plus a look into clusters, shards, indexes, documents, replication,  and so on. So let's start.

Elasticsearch is open source analytics and full-text search engine. It’s often used for enabling search functionality for different applications. For example, a blog for which you want users to be able to search for various kinds of data. That could be blog posts, products, categories, etc. You can actually build complex search functionalities with Elasticsearch, like auto-completion, handling synonyms, adjusting relevance, and so on.

Suppose, you want to implement a full-text search while taking a number of other factors into account, like rating and size of posts, and adjust the relevance of the results. Technically, Elasticsearch can do everything and anything you want from a "powerful" search engine and hence it doesn’t limit you to only full-text searches. You can even write queries for structured data and use that to make pie charts, allowing you to use Elasticsearch as an analytics platform.

Here are some of the common use cases where Elasticsearch or the ELK stack (Elasticsearch, Logstash, Kibana) can be used:

One thing you might wonder about is how all this is done via Elasticsearch. Actually, in Elasticsearch, data is stored in the form of documents where a document is analogous to a row in a relational database, like MySQL. A document then contains fields which are similar to columns in a relational database. Technically, a document is nothing but a JSON object. For example, if you want to add a book object to Elasticsearch, your JSON object for that book may look something like this:

How do you query Elasticsearch? The answer is RESTful APIs:

The queries (which we will cover later) are also written as JSON objects.

Since Elasticsearch is distributed by nature, it scales very well in terms of increasing data volumes and query throughput. Hence, even if you have loads of data, the search is still going to be super fast. As a matter of fact, Elasticsearch is written in Java and is built on the top of Apache Lucene.

Now, before moving on with our journey of exploring Elasticsearch, let us give a quick overview of the ELK stack, which is also popularly known as the Elastic Stack. 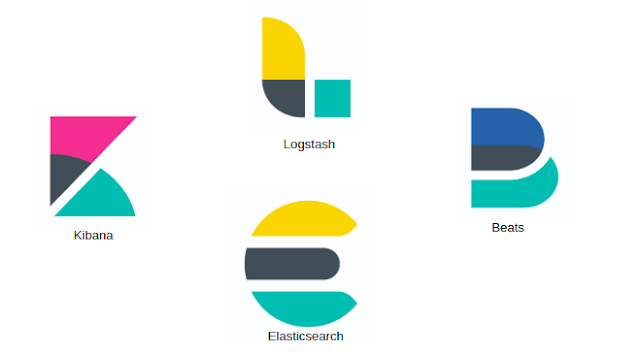 So, let us start with Kibana.

Kibana is basically an analytics and visualization platform, which lets you easily visualize data from Elasticsearch and analyze it to make sense of it. You can assume Kibana as an Elasticsearch dashboard where you can create visualizations such as pie charts, line charts, and many others.

There are an infinite number of use cases for Kibana. For example, you can plot your website’s visitors onto a map and show traffic in real-time. Kibana is also where you configure change detection and forecasting. You can aggregate website traffic by the browser and find out which browsers are important to support based on your particular audience. Kibana also provides an interface to manage the authentication and authorization of Elasticsearch. You can literally think of Kibana as a web interface to the data stored on Elasticsearch.

It uses the data from Elasticsearch and basically just sends queries to Elasticsearch using the same REST API that can otherwise manually do this. Kibana provides an interface for building those queries and lets you configure how to display the results. In this sense, it saves you a lot of time because you don't have to implement all of this by yourself. You can easily create dashboards for System Administrators which shows the performance of servers. You can create dashboards for developers which shows application errors and API response times and what not.

As can be seen, you may store a lot of different kinds of data in Elasticsearch, apart from data that you want to search and present to your external users. In fact, you might not even use Elasticsearch for implementing search functionality at all. Using Elasticsearch as an analytics platform together with Kibana is a pretty common use case. There is an official demo for what Kibana can do on Elastic's site. You must check it out. Now, let's move onto Logstash.

Traditionally, Logstash has been used to process logs from applications and send them to Elasticsearch, hence the name. That’s still a popular use case, but Logstash has evolved into a more general purpose tool, meaning that Logstash is a data processing pipeline. The data that Logstash receives will be handled as events, which can be anything of your choice. They could be log file entries, e-commerce orders, customers, chat messages, etc. These events are then processed by Logstash and shipped off to one or more destinations. A couple of examples could be Elasticsearch, a Kafka queue, an e-mail message, or to an HTTP endpoint. 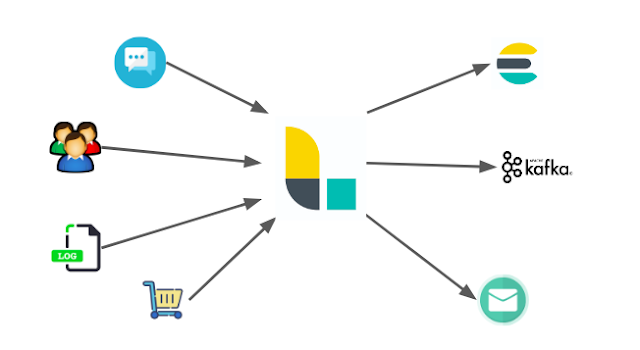 A Logstash pipeline consists of three stages: an input stage, a filter stage, and an output stage. Each stage can make use of a plugin to do its task.

So, Logstash receives events from one or more input plugins at the input stage, processes them at the filter stage, and sends them to one or more stashes at the output stage. You can have multiple pipelines running within the same Logstash instance if you want to, and Logstash is horizontally scalable.

A Logstash pipeline is defined in a proprietary markup format that is somewhat similar to JSON. Technically, it’s not only a markup language, as we can also add conditional statements and make a Logstash pipeline dynamic.

Let us consider a basic use case of Logstash before moving to the other components of our ELK stack. Suppose that we want to process access logs from the web server. We can actually configure Logstash to read the log file, line by line, and consider each line as a separate event. This can be easily done by using the input plugin named “file,” but there is a handy tool named Beats that is far better for this task. We will discuss Beats in the next section.

Once Logstash receives a line, it can process it further. Technically, a line is just a string, a collection of words, and we need to parse this string so that we can fetch valuable information out of it, like the status code, request paths, the IP address, and so on. We can do so by writing a "Grok" pattern, which is somewhat similar to a regular expression, to match pieces of information and save them into fields. Now suppose our "stash" here is Elasticsearch, we can easily save our processed bits of information stored in fields to the Elasticsearch as JSON objects.

To summarize, we can look at Elastic Stack as: 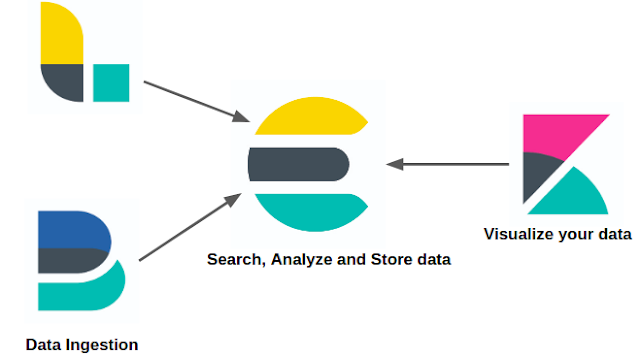 That's all for Part 1! Tune back in tomorrow when we'll cover the architecture of Elasticsearch.