The security and privacy of users' data have been a growing concern for the past few years. At the same time, JWT, as one technology to combat it, has been used more and more. Understanding JWT will give you an edge over the other software engineers. JWT might seem simple at first, but it is pretty hard to understand.

In this article, we will explore mainly JWT and JWS. In addition, we'll also go through JWE, JWA, and JWK quickly. This article aims to make the reader understand the concept of JWT without diving too deep into the topic.

Before taking a deeper look, it‘s better if we know the connection between JWT, JWS, JWE, JWA, and JWK. 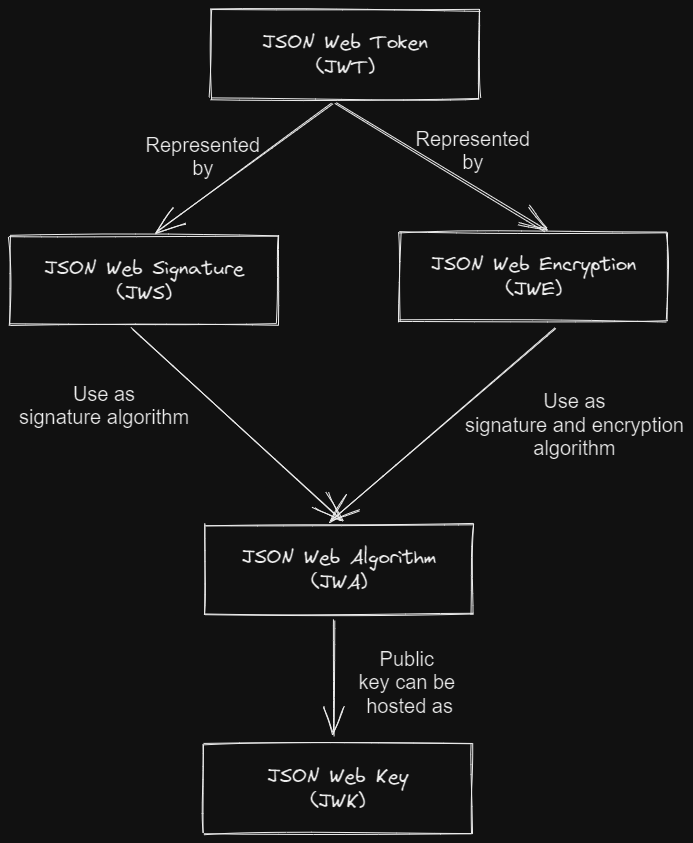 From the diagram above, we can see that:

Now that we know their relationship, let’s take a deeper look at the JWT, JWS, JWE, JWA, and JWK.

First, let's see the definition of JWT defined in the RFC 7519.

"JSON Web Token (JWT) is a compact claims representation format intended for space-constrained environments such as HTTP Authorization headers and URI query parameters. JWTs encode claims to be transmitted as a JSON object that is used as the payload of a JSON Web Signature (JWS) structure or as the plaintext of a JSON Web Encryption (JWE) structure, enabling the claims to be digitally signed or integrity protected with a Message Authentication Code (MAC) and/or encrypted. JWTs are always represented using the JWS Compact Serialization or the JWE Compact Serialization."

From the text, we can understand that JWT is not a structure but a set of claims in the shape of either JWS or JWE as its way of securing itself. In the most basic form, the difference between JWS and JWE is that everyone can see the payload of JWS while the JWE one is encrypted.

In this article, we will explore more about JWS than JWE.

JWA (RFC 7518), which stands for JSON Web Algorithm, is a specification defining which hashing and encryption algorithm to make a JWT.

For example, the following are the hashing algorithms we can use to create a JWT with a JWS structure.

JWK (RFC 7517) stands for JSON Web Key. JWK is a JSON data structure that contains information about hashing function's cryptographic key. It's a way to store your hashing key in JSON format.

The JWK is usually used to host a public key for a hashing function with an asymmetric key (private key and public key), so the consumer can get the key by themself.

JWS (RFC 7515), which stands for JSON Web Signature, is one of the structures used by JWT. It's the most common implementation of the JWT. JWS consists of 3 parts: the JOSE header, payload, and signature.

The following is an example of JWS in compact serialization.

If we decode the JWS, we will get JOSE (JavaScript Object Signing and Encryption) header:

The next part is the signature. We won't decode it because it's a bytes value.

The most common question related to JWT (in JWS structure) is what makes it secure since everyone can decode the JWT and see its data. The JWT is secure because not everyone can create it, but only the one with the secret key.

JWE (RFC 7516), unlike JWS, encrypts its content using an encryption algorithm. The only one that can see what is inside the JWT is the one with the key.

The structure of JWE compact serialization is as follows:

Let's take a look at one example:

The example uses the RSA_OAEP_256 key management algorithm and AES_128_CBC_HMAC_SHA_256 as its encryption algorithm. If we decrypted the JWE, we will get:

Now let's take a deeper look at the JWT by using the following example:

The JWT in the example is a JWT with JWS compact serialization structure. We need to split the JWT by . (dot), and Base64 decodes them to look at what's inside it. 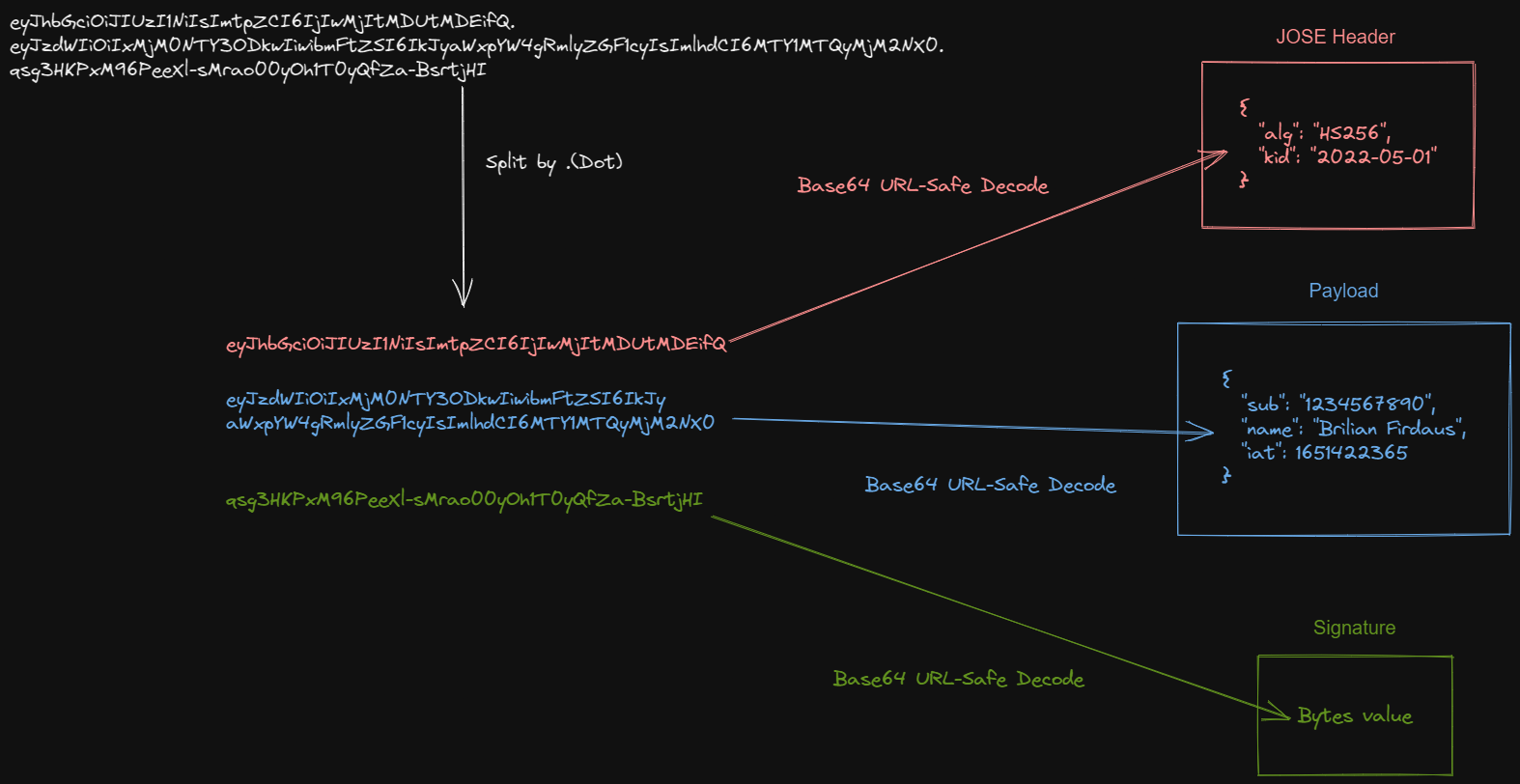 After splitting and decoding the JWT, we will get three parts:

After doing a Base64 decode on the string, we will get:

Let's break down the two fields we have in our JWT:

alg is the only mandatory header, and it's the only one needed for most cases, but there are many more headers.

With the JOSE header out of the way, let's take a look at the second part, the payload.

After we decode it:

This part of the JWT is called the payload. There are fields with the term JWT claims ( sub, name, iat). So, now seems like a good time to talk about JWT claims.

There are three types of JWT claims:

Let's break it down one by one, starting from Registered Claims. Registered claims are claims that have been documented initially in the RFC 7519.

You can check the complete list here. None of these claims are mandatory, as dictated in the RFC 7519, but they are essential in securing your JWT.

The next type of claim we'll explore is private claims. These claims can be anything. It's up to the JWT creator or consumer to determine the claims name and function.

Warning: When specifying private claims, you need to be careful not to cause any collision in the name.

The last one is public claims, which is a type of claim that is publicly registered through IETF.

Most people don't have any use case needing them to register their claims. For best practice, you can search the list of Public Claims and use the one suitable for your use case.

If you've come to this part, you might wonder what makes the JWT secure since everyone can see its content. Well, the payload of the JWS is intended for everyone to read. What makes the JWT safe is the consumer can verify who is the one issued the JWT.

The signature part in JWT is created by using a hash function. If you're not familiar with a hash function, it's an algorithm that maps an object to another object. A hash function has two crucial traits which make it suitable to secure the JWT:

In this article, we'll explore 2 of the most common hash function used in JWT:

Now, let's break apart the signature we use in the example:

Which is generated using HS256 MAC algorithm with the secret key (in base64):

Info: The minimum bytes length recommended for the hs256 secret key is 32 bytes. The secret key must be generated with a Cryptographically-secure pseudorandom number generator to ensure its randomity. 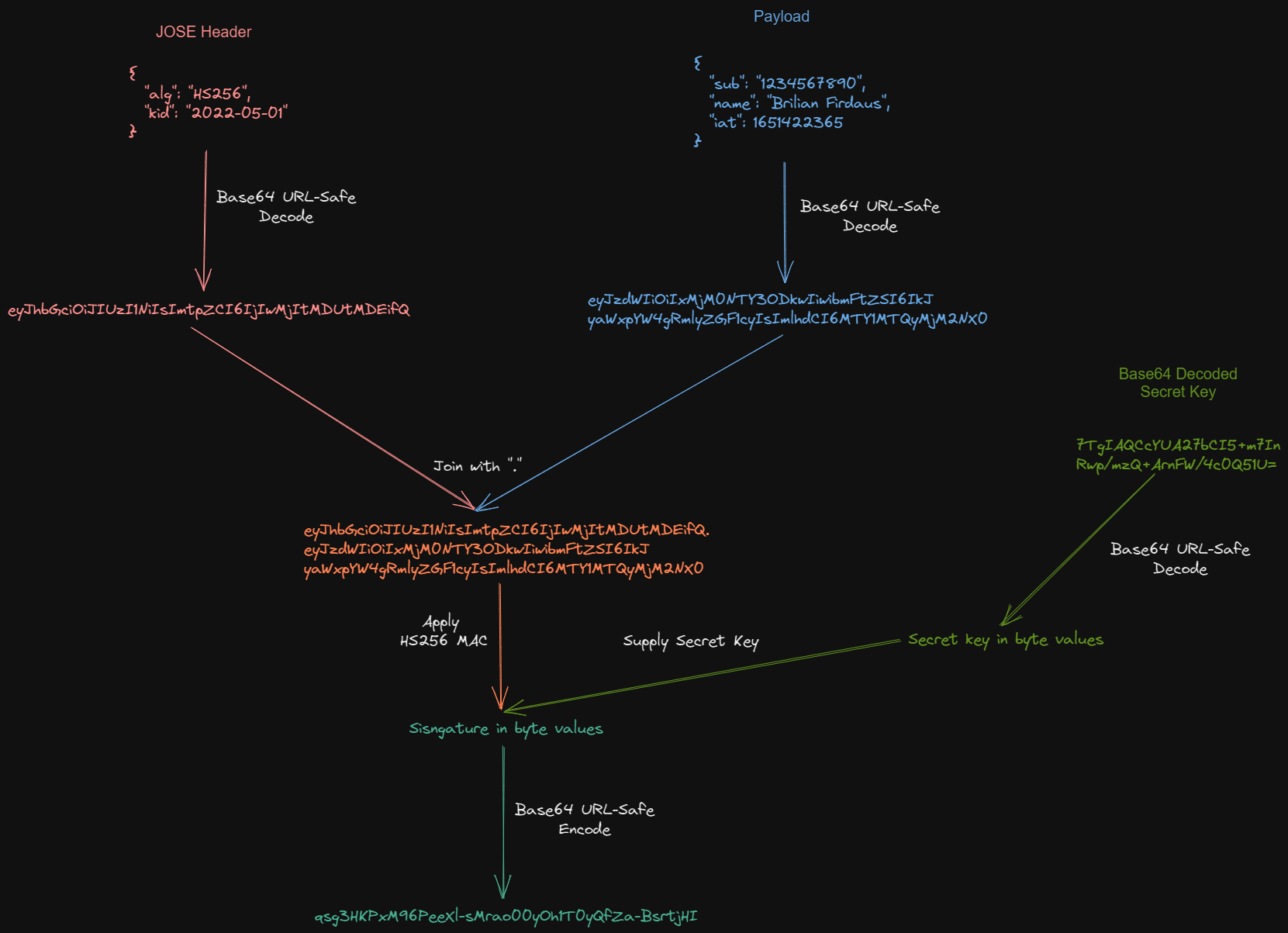 ECDSA-256 (ES256), unlike HMAC, is an algorithm that uses hashing function with an asymmetric key. Hashing function with an asymmetric key means we will need to generate two keys. One key is called a private key, which can be used to both sign and verify the JWT signature. The other key is called a public key, which can only be used to verify the JWT signature. 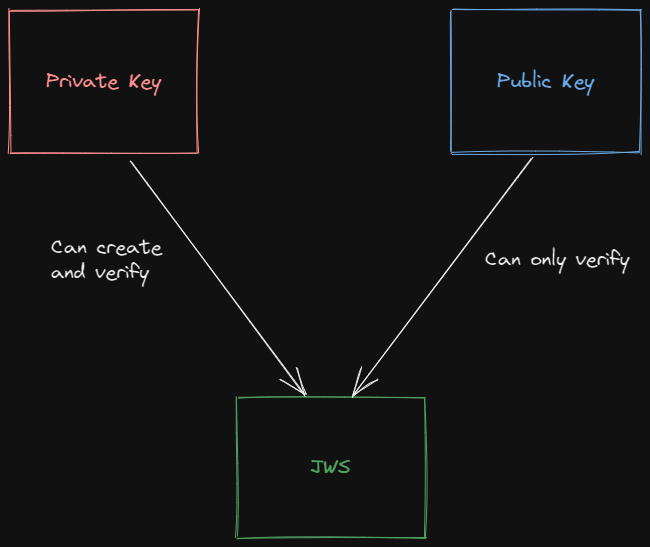 As their name implies, a public key can be stored in a public space (usually as a JWK), so the client that needs to verify your JWT signature can get it quickly. In contrast, a private key must be secured and treated as a credential.

Which Hashing Function to Choose?

We have learned two algorithms, HS256 and ES256, but when to choose one instead of another? You can easily decide about it by thinking about whether the producer and the consumer of the JWT are not the same components.
If the consumer of the JWT is the same component, then you can use the HS256 algorithm. This hashing function's most common use case is when you're making an authentication system using JWT.

On the other hand, if the JWT is produced and consumed by a different component, you can use ES256. This way, you can secure your key and ensure that no one else (even the public key owner) can create a JWT on your behalf.

Warning: Some people consider HS256 a kind of anti-pattern because JWT is supposedly used to increase security, but most of the use case that uses this algorithm decreases security.
For example, suppose you plan to use JWT as an authentication session instead of a database. In that case, your system is more insecure because you can't expire the JWT, so you can't kick sessions.

This way, the client will know which key to get by comparing the kid in the JOSE header JWT to the one in the JWK. The other fields, combined, will make the public key.

In this article, we've learned that:

Alas, I want to thank you for reading until the end. The next step you can take is to learn how to implement it. There are many libraries for popular programming languages that you can check.

Published at DZone with permission of Brilian Firdaus. See the original article here.