When object-oriented programming was introduced, inheritance was the main pattern used to extend object functionality. Today, inheritance is often considered a design smell. In fact, it has been shown that extending objects using inheritance often results in an exploding class hierarchy (see Exploding class hierarchy section). In addition, several popular programming languages such as Java and C# do not support multiple inheritance, which limits the benefits of this approach.

The decorator pattern provides a flexible alternative to inheritance for extending objects functionality. This pattern is designed in a way that multiple decorators can be stacked on top of each other, each adding new functionality. In contrast to inheritance, a decorator can operate on any implementation of a given interface, which eliminates the need to subclass an entire class hierarchy. Furthermore, the use of the decorator pattern leads to clean and testable code (see Testability and Other Benefits sections).

Sadly, a large portion of today’s software developers have a limited understanding of the decorator pattern. This is partially due to the lack of education but is also because programming languages have not kept up with the evolution of object-oriented design principles in a way that encourages developers to learn and use those patterns.

An exploding class hierarchy occurs when the number of classes needed to add a new functionality to a given class hierarchy grows exponentially. To illustrate, let’s consider the following interface:

We can achieve this by adding optional retries and thread-safety features to the EmailService class itself. The class would accept parameters in the constructor that enables/disables each feature. However, this solution violates both the Single Responsibility Principle (because the EmailService would have additional responsibilities) and the Open-Closed Principle (because the class itself would have to be modified for extension). Furthermore, the EmailService class could be part of a third-party library that we can’t modify.

A common approach to extend a class without modifying it, is to use inheritance. With inheritance, a derived class inherits the properties and behavior of its parent and can optionally extend or override some of its functionality. In the EmailService example, we can create three subclasses, one that adds retries, one that adds thread-safety and one that adds both features. The class hierarchy would look as follows:

In addition to retries and thread-safety, we’d like to extend our email service API so that one can optionally enable logging. Once again, we use inheritance to extend the class hierarchy which becomes as follows:

Notice that the number of additional classes needed to add support for logging is equal to the total number of classes in the existing hierarchy (four in this case). To confirm this behavior, let’s add caching to the hierarchy and examine the result. The new hierarchy is shown below: 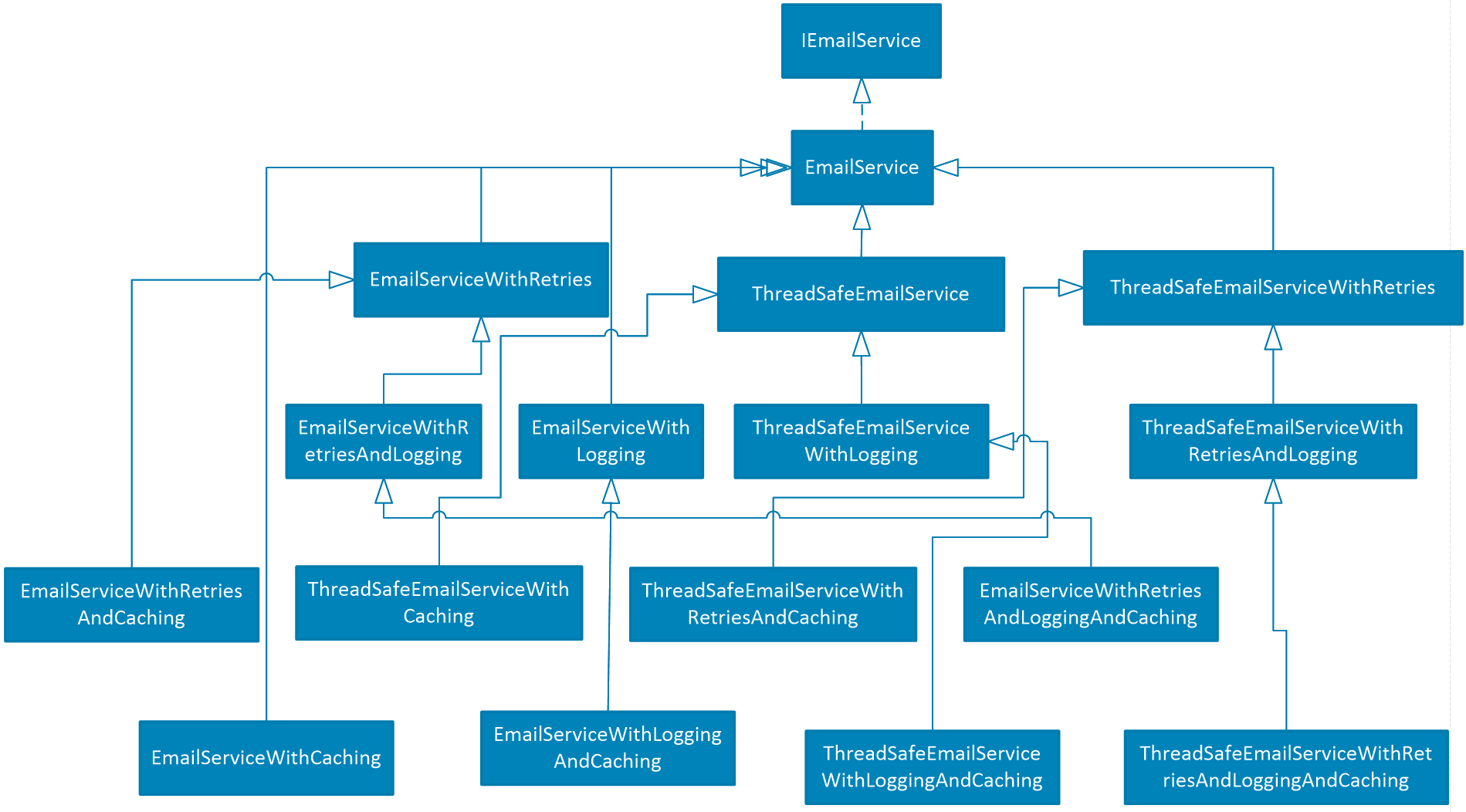 As you can see, the class hierarchy is growing exponentially and is quickly becoming unmanageable. This problem is known as exploding class hierarchy.

The Decorator Pattern to the Rescue

The decorator pattern extends object functionality using composition rather than inheritance. It eliminates the problem of exploding class hierarchy because only one decorator is needed for each new feature. To illustrate, let’s create a decorator for the retries feature. For simplicity, a simple for loop with three retries is used. The EmailServiceRetryDecorator is as follows:

As shown in the class diagram above, only one class is needed for each feature and the resulting class hierarchy is simple and scalable (grows linearly).

At first glance, it may seem that only one feature can be added to a given implementation using the decorator pattern. However, because decorators can be stacked on top of each other, the possibilities are endless. For instance, we can dynamically create an equivalent to the EmailServiceWithRetriesAndCaching that we created with inheritance as follows:

In addition, by changing the order of decorators or using the same decorator at multiple levels, we can dynamically create new implementations that would be difficult to create with inheritance. For instance, we can add logging before and after retries as follows:

With such combination, the status of the request before and after retries will be logged. This provides verbose logging that can be used for debugging purposes or to create rich dashboards.

Another major benefit of the decorator over inheritance is testability. To illustrate, let’s consider writing a unit test for the retries feature.

The EmailServiceWithRetries that we created with inheritance cannot be tested in isolation of its parent class (EmailService) because there is no mechanism to replace a parent class with a stub (also known as mocking). Furthermore, because EmailService performs network calls to a backend server, all its subclasses become difficult to unit test (because network calls are often slow and unreliable). In such cases, it’s common to use integration tests instead of unit tests.

On the other hand, because the EmailServiceRetryDecorator takes a reference to IEmailService in its constructor, the decorated object can be easily replaced with a stub implementation (i.e. mock). This makes it possible to test the retry feature in isolation, which is not possible with inheritance. To illustrate, let’s write a unit test that verifies that at least one retry is performed (I used Mockito framework to create a stub in this example).

In contrast to an integration test that would depend on the implementation of EmailService and remote service calls, this test is simple, fast and reliable.

Even though the decorator pattern has many advantages over the alternative (inheritance or modifying existing classes), it has few drawbacks that are slowing its adoption.

To illustrate the problem of forwarding methods, let’s consider the following IProcess interface and create a decorator for it.

Another drawback of the decorator pattern is its lack of popularity, especially among junior developers. In fact, less popular often means harder to understand which can lead to slower development time.

Native Support for the Decorator Pattern

A good example of how programming languages can have an impact on the adoption of design patterns is the introduction of native support for the Observer pattern in C# (also known as events). Today C# developers (including junior ones) naturally use the Observer pattern to communicate events between loosely coupled classes. If events did not exist in C#, many developers would introduce direct dependencies between classes to communicate events, which will result in code that is less reusable and is harder to test. Similarly, native support for the decorator pattern would encourage developers to create decorators instead of modifying existing classes or inappropriately using inheritance, which will lead to better code quality.

The following implementation illustrates what native support for the decorator pattern would look like in Java:

One downside of this approach is that decorators will not be able to inherit from other classes (for languages that don’t support multiple inheritance).

When to Use Inheritance

Although I believe that the decorator pattern should be chosen over inheritance when possible, inheritance is more adequate in some cases. A common situation where a decorator would be difficult to implement is when derived classes need to access non-public fields or methods in the parent class. Because decorators are only aware of the public interface, they do not have access to fields or methods that are specific to one implementation or another.

As a rule of thumb, if your subclass only depends on the public interface of its parent, it’s a hint that you could use a decorator instead. In fact, it would be great if static analysis tools suggested replacing inheritance with a decorator in such cases.