Join For Free
As you may be aware, the JDK 8 Early Access is now available for download. This allows Java developers to experiment with some of the new language and runtime features of Java 8.
One of these features is the complete removal of the Permanent Generation (PermGen) space which has been announced by Oracle since the release of JDK 7. Interned strings, for example, have already been removed from the PermGen space since JDK 7. The JDK 8 release finalizes its decommissioning.
This article will share the information that we found so far on the PermGen successor: Metaspace. We will also compare the runtime behavior of the HotSpot 1.7 vs. HotSpot 1.8 (b75) when executing a Java program “leaking” class metadata objects.
The final specifications, tuning flags and documentation around Metaspace should be available once Java 8 is officially released.
Metaspace: A new memory space is born
The JDK 8 HotSpot JVM is now using native memory for the representation of class metadata and is called Metaspace; similar to the Oracle JRockit and IBM JVM's.
The good news is that it means no more java.lang.OutOfMemoryError: PermGen space problems and no need for you to tune and monitor this memory space anymore…not so fast. While this change is invisible by default, we will show you next that you will still need to worry about the class metadata memory footprint. Please also keep in mind that this new feature does not magically eliminate class and classloader memory leaks. You will need to track down these problems using a different approach and by learning the new naming convention.
I recommend that you read the PermGen removal summary and comments from Jon on this subject.

In order to better understand the runtime behavior of the new Metaspace memory space, we created a class metadata leaking Java program. You can download the source here.

The following scenarios will be tested:
JDK 1.7 @64-bit – PermGen depletion

As you can see form JVisualVM, the PermGen depletion was reached after loading about 30K+ classes. We can also see this depletion from the program and GC output.
Class metadata leak simulator
Author: Pierre-Hugues Charbonneau
http://javaeesupportpatterns.blogspot.com
ERROR: java.lang.OutOfMemoryError: PermGen space 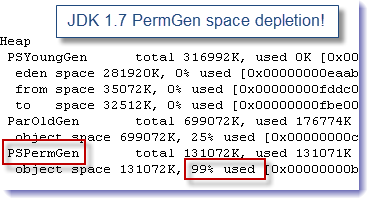 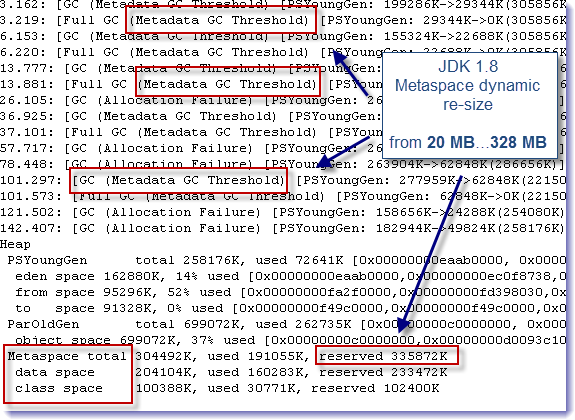 As you can see from the verbose GC output, the JVM Metaspace did expand dynamically from 20 MB up to 328 MB of reserved native memory in order to honor the increased class metadata memory footprint from our Java program. We could also observe garbage collection events in the attempt by the JVM to destroy any dead class or classloader object. Since our Java program is leaking, the JVM had no choice but to dynamically expand the Metaspace memory space.

The program was able to run its 50K of iterations with no OOM event and loaded 50K+ Classes.

As you can see form JVisualVM, the Metaspace depletion was reached after loading about 30K+ classes; very similar to the run with the JDK 1.7. We can also see this from the program and GC output. Another interesting observation is that the native memory footprint reserved was twice as much as the maximum size specified. This may indicate some opportunities to fine tune the Metaspace re-size policy, if possible, in order to avoid native memory waste.
Now find below the Exception we got from the Java program output.
As expected, capping the Metaspace at 128 MB like we did for the baseline run with JDK 1.7 did not allow us to complete the 50K iterations of our program. A new OOM error was thrown by the JVM. The above OOM event was thrown by the JVM from the Metaspace following a memory allocation failure.
#metaspace.cpp 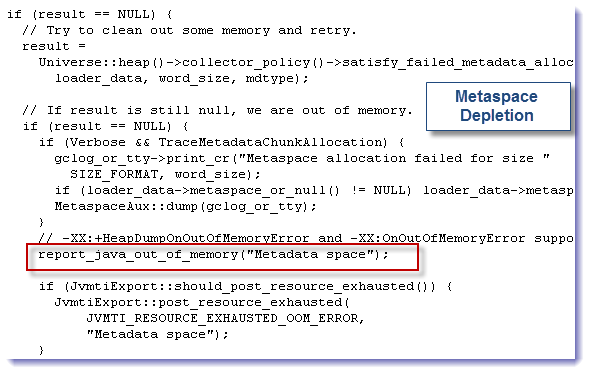 I hope you appreciated this early analysis and experiment with the new Java 8 Metaspace. The current observations definitely indicate that proper monitoring & tuning will be required in order to stay away from problems such as excessive Metaspace GC or OOM conditions triggered from our last testing scenario. Future articles may include performance comparisons in order to identify potential performance improvements associated with this new feature.
Please feel free to provide any comment.
Java (programming language) Space (architecture) Memory (storage engine) garbage collection Java Development Kit Metadata Java virtual machine