LRU (or Least Recently Used) is a cache eviction strategy, wherein if the cache size has reached the maximum allocated capacity, the least recently accessed objects in the cache will be evicted. Also, the objects in the cache could be accessed by multiple threads in an application so is very important that the cache has good synchronization mechanism in-built. This article describes the implementation of a Java based cache with LRU eviction strategy; but fundamentally applies to any programming language.

Many a times, developers embed caching frameworks in their application like Ehcache (which is a great library for general purpose, in-memory caching). But there are ocassions when there is no liberty to use such frameworks or libraries; like cases for lightweight Java applications or mobile applications which are targeted to run on minimal memory footprint (or sometimes due to delivery deadlines there is no extra time learn and configure 3rd party caching frameworks and deploy to production). In these times, such a simple, light-weight LRUCache class can be used and with sufficient unit test coverage the cache can be heaviliy relied upon.

This article explains implementing a cache with LRU policy using ConcurrentHashMap and a Doubly-Linked-List data structure. The same can be achieved using LinkedHashMap, however it is not thread safe by default (and maybe in the next article I'll submit one using LinkedHashMap).

Before designing the LRU based cache, we need to understand the some important properties of a cache:

A ConcurrentHashMap is used - to save objects and access them by keys so that the access time is O(1) order, offers concurrent access, size limit can be set and objects can be accessed by using a key.

A Doubly-Linked-List (DLL) maintains the pointers to the same objects (in the map). This DLL helps us achieve the LRU eviction strategy, where the objects accessed frequently will be at the tail end and the objects accessed the least will be towards the head of the list. When a new object is being inserted into the cache and if the cache has reached it's maximum capacity, the LRU eviction is triggered. Basically from DLL, the head node (which is least recently used object) will be removed and the same will be deleted from the map. 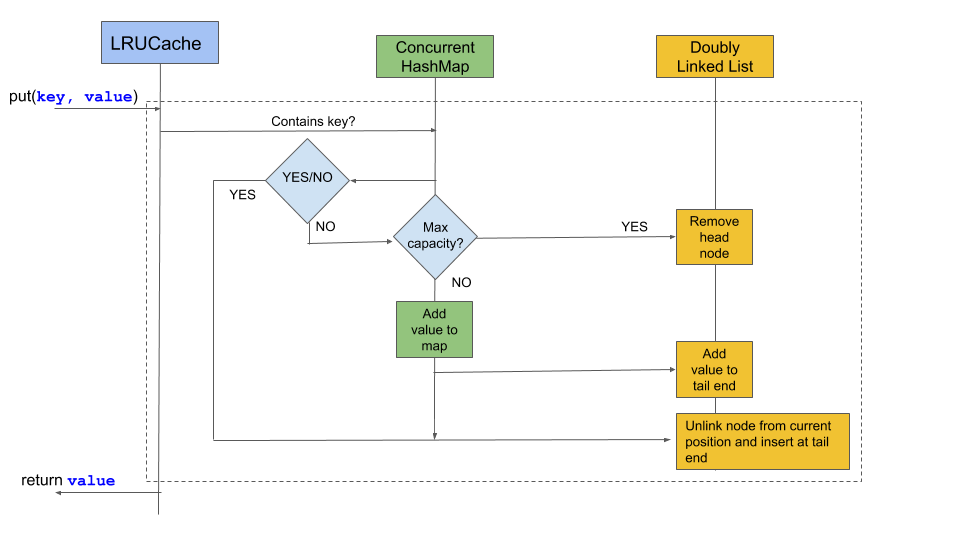 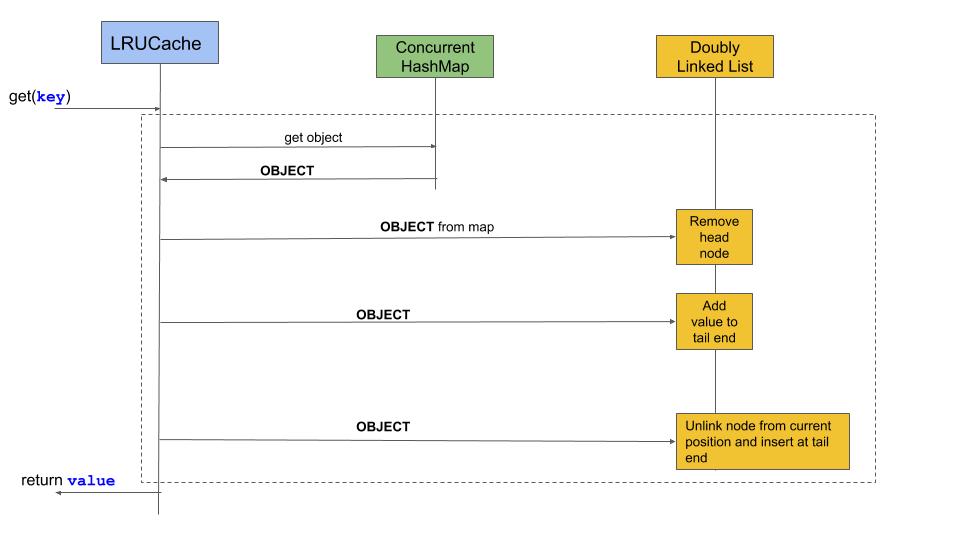 The LRU cache implementation is realized by implementing class LRUCache<K, V> which works on generics. This cache objects are identified by a key, K - uniquely identifiable parameter (immutable objects highly preferred) and V - value can be any type of custom object. If a key is repeated for another object, then the cache would replace the older object with newer one.

The LRUCache class is very basic and there are other functionalities missing like deleting object from cache. It will be a good idea if the LRUCache class implements a Cache interface, so that there can be multiple implementations of caches using different eviction strategies. Some of the other evictions that can be considered could be:

Read Java's ConcurrentHashMap - it is built to perform and has wonderful abilities over the normal HashMap if you are running in a multi-threaded environment. There are multiple cache eviction strategies like Most-recently used (MRU), count-min sketch, time-to-live etc and all of these have specific use cases. LRU is the most commonly used eviction strategy used and solves most of our needs.

The use of caching frameworks and distributed caches have grown in the last couple of years due to high data volume applications. The challenge of applying these eviction strategies gets really interesting when memory is limited, the objects stored are distributed across multiple nodes and eviction has to applied across this distribution, saving large objects and binary data etc. REDIS and Memcache are 2 well know distributed caching servers used. REDIS offers a little more than plain caching, it is a data-structure cache with persistence option to the disk.

In the current implementation, a plain simple class is used to implement LRU based cache and storing objects using key-value pairs.

In the next iteration of this implementation, the plan is to build a simple caching library with various functionalities like adding POJO objects, support Set interfaces. Addition of Factory patter to create various caches and externalize the caching strategy (like LRU, MRU, time-based etc).