According to The Britannica Dictionary, the term collection designates:

...a group of interesting or beautiful objects brought together in order to show or study them.

Java, as well as many other programming languages (if not all), owns a data structure that embodies the essence of that term, that is, a group of individual objects represented as a single unit and upon which a set of operations can be performed. From the perspective of computational programs that deal with large volumes of data, a typical operation involving collections is the transformation of each of its objects. In this article, the underlying concept of that operation is being borrowed from the ETL (Extract, Transform, and Load) processes:

...the process of converting the extracted/acquired data from its previous form into the form it needs to be in so that it can be placed into another database.

To keep the focus on the collection handling by itself, the database element will be abstracted from the transform operation. Since version 1.2, Java has counted on an java.util.Collection interface that is the root of its collections hierarchy. Until the release of Java 7, the only way to reach an outstanding improvement in the performance of processing large collections was by parallelizing this operation. However, with the advent of Java 8, the new java.util.stream package provides:

...a Stream API to support functional-style operations on streams of elements. The Stream API is integrated into the Collections API, which enables bulk operations on collections, such as sequential or parallel map-reduce transformations.

Since then, Java offers a native way of trying to get relevant performance improvements considering the parallelization of transform operations applied to collections. This strategy is considered a "trying", as simply using parallel stream operations does not guarantee better performance. It depends on factors that are outside the scope of this article. Despite that,  parallel streams constitute a good starting point to look for any processing improvement.

In this article, a very simple transform operation will be applied to a large Java collection. Thus, three different parallel processing strategies will be benchmarked. The performance of each one will be compared with the results achieved using both serial and parallel native streams.

The operation itself consists of capitalizing the String provided as a parameter. Two implementations of the ElementConverter interface were created, one transforms a single String into a single uppercase String:

And the other performs the same operation on a collection:

An AsynchronousExecutor class was also implemented with a dedicated method for each parallel processing strategy besides some other auxiliaries ones.

Once each thread has applied the transform operation to all objects of its respective sublist, it must synchronously add the modified objects to the output list. These steps are guided by a specific method of the AsynchronousExecutor class.

Note that this strategy does not have any synchronous execution points during the transform operation, that is, all threads perform their tasks completely independently of each other.  But assembling the output collection can be done using at least two different approaches.

In this approach, a new list composed of default elements is created before processing the collection. Disjoint slices - delimited by index pairs (fromIndex, toIndex) - of this new list are accessed by threads. They store each new object generated from reading the respective slice from the source collection. A new method of the AsynchronousExecutor class is dedicated to this approach.

This approach differs from the previous one just by the fact threads use an array to store the transformed new objects instead of a list. After all, threads finish their operations, the array is converted to the output list. Again, a new method is added to the AsynchronousExecutor class for this strategy.

The CPU time of each strategy was calculated by taking the average of 5 executions and collections of 1,000,000 and 10,000,000 random String objects were generated in each execution.  The code was executed on a machine running Ubuntu 20.04 LTS 64-bit operating system with 12GB of RAM and a CPU Intel Xeon E3-1240 V3 of 3.40GHz with 4 cores per socket (2 threads per socket). The results are as presented in below table:

The first expected result is that the native serial stream achieved the highest CPU time. Actually, it was added to the tests for establishing an initial performance parameter. Simply changing the strategy to a native parallel stream resulted in an improvement of about 34.4% for collections of 1M objects and 44% of 10M objects. Thus, from now on, the performance of the native parallel stream strategy will be used as a reference for the other three strategies.

As the Array-based Shallow Partition strategy presented a relevant performance with both collections size, its speed up ratio was analyzed. The speedup is calculated by taking the ratio T(1)/T(p) where T is the CPU time for running the program with p threads; T(1) corresponds to the elapsed time to execute the program sequentially. Below is the result of plotting the Speed Up X Number of Threads chart for that strategy. 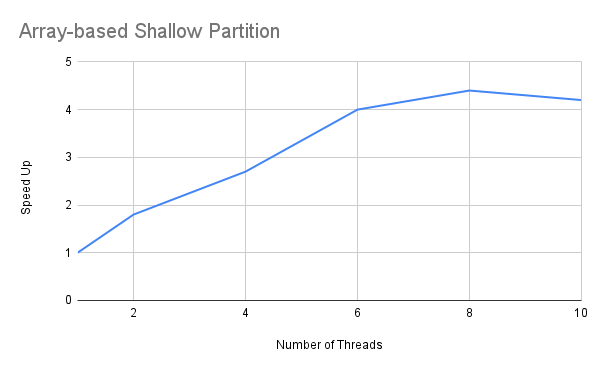 As all tests were performed on a machine with 4 cores and with 2 threads per core, it was expected that the speedup rate of the strategy would increase with the use of up to 8 threads. Although the chart reflects that behavior, the maximum speed-up ratio reached by the algorithm was 4.4X. A very similar ratio was achieved with collections of 10M objects - this is the reason why a new chart was not plotted. It means that the strategy does not linearly improve its performance according to the number of threads employed. Ideally, by using 8 threads, the speedup ratio should correspond to an 8X improvement in CPU time.

The use of native parallel streams provides a reliable initial threshold to speed up the processing of large collections. Nevertheless, it is worth trying alternatives parallelization strategies to achieve better performances rates. This article presented three distinct algorithms that can be used for overcoming the parallel streams' performance. The complete source code is available on a GitHub repository - it is a Maven project whose specific module is dzone-async-exec.