Two great examples to support the same statement would be the following. Let's start with Zoom, an incredible video-conferencing application on which almost today's world relies on was developed using JAVA and C++. The second example will be a food ordering application that again depends on several different coded script lines.

Coming back to this article's topic, and the things we are going to talk about while comparing two remarkable programming languages, Python (Snake) and JAVA(Coffee).  We are going to evaluate the performance of both the programming languages based on several different factors. Some of our comparison parameters will include their popularity, syntaxes, performance ratio, and how good they both are for applications like Machine Learning, Data analysis, and so on. So without wasting any further time of yours, let us head to finding out which programming language would stand as an excellent prospect if you are learning it in 2021.

Java, safe to say, is the most used programming language of this century. Probably, you can read this blog on this webpage because Java exists. It is the building block of almost all the modern IT applications we see around us these days. Perhaps the reason behind its popularity is its robust performance and comparatively easier to code programming language. Java is a multi-threaded secure language that helps the developer to create applications ranging from Banking to every sector you can probably think of or consider. Also, when it comes to processing a large pile of data, Java gets the job done with ease.

The write once, run anywhere programming language has come a long way since its inception under the development by Sun Microsystems. It is quite similar to C, but on the other hand, easier than it. Java also goes well when combined with Node JS, Android, spring in line to develop a large-scale application that is bound to perform.

Where Is Java Used?

The application of Java is widespread. As said earlier, almost all the IT applications we depend on today, in turn, depends on some great codes written on Java to function optimally.

Some of the most used application of Java are:

Development of Web Application: Java is the most go-to programming language when it comes to developing an ideal web application. So be it an eCommerce website or a streaming service platform you are looking to build, Java will surely come ideally helpful for you.

Development of Android Application: Almost most of us are already aware of the fact that most of the mobile applications we use these days are developed on Java; thus it is another place where the programming language prospers brightly.

Some of the top companies to implement Java for their development purposes are:

Some of the top Java Libraries are:

Unlike the more complex Java, Python is a much more interpreted yet advanced programming language for general purposes, which is advanced and dynamic at the same time. However, Python these days has become the most preferred language giving C++ and Java a run for their money. Thanks to the simplistic approach that the developers of Python have focused on.

The codes in Python are easily readable and is also much easier to learn and adapt. Python is also in great demand for data science, web development, and other educational applications. Even the likes of Instagram and Google uses Python for their object-oriented viral programming applications.

Where Is Python Used?

Python, with time, is becoming a very popular language. As it is simple to code and correct, developers today rely on this programming language to develop their next application.

Some of the most used application of Python are:

Data science has become a breeze of air with Python, and full credit goes to how this programming language extracts vital information from large databases.

Desktop applications these days even rely heavily on Python to perform at their sheer best. The Python library Tkinter can be utilized in its entirety to develop user interfaces that inspire everyone using the application.

Machine Learning and Artificial Intelligence are two such applications where Python's implementation has provided developers with great results.

Web application and Game development today also witness a surge in the use of Python and its frameworks to create beautiful applications that everyone can enjoy.

Some of the top companies to implement Python for their development purposes are:

Some of the top Python Libraries are: 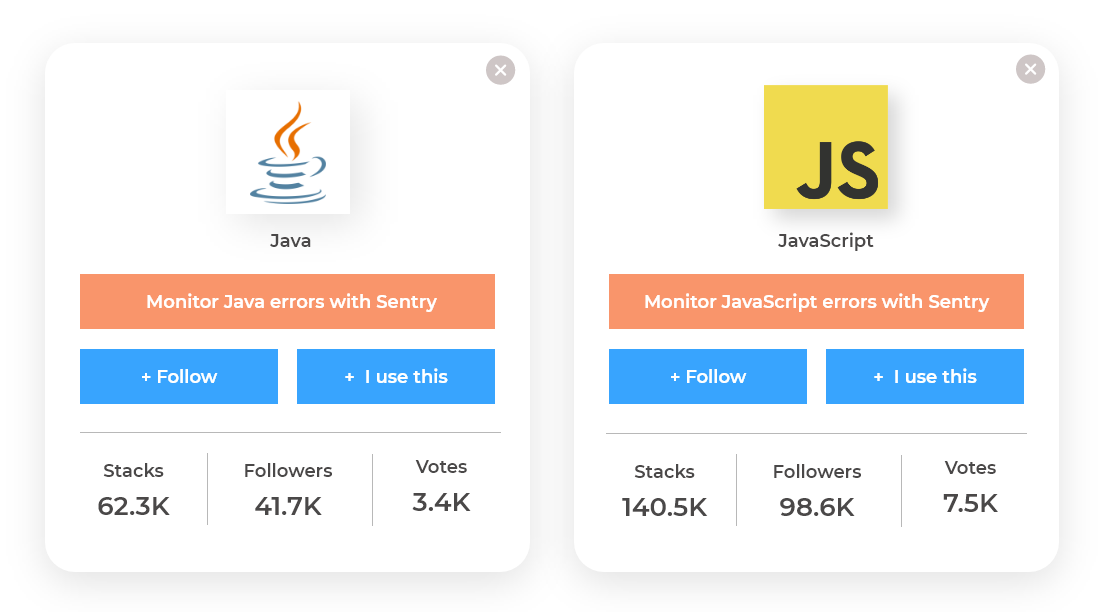 Developers of JavaScript were smart enough with the naming of their newly developed JavaScript, though. As the programming language shares a similar name to that of JAVA, it attracted a lot of popularity during its initial days.

There are a few differences between Python and JAVA when we are discussing the syntaxes for both of them. Python is more of a dynamic language where you need not determine the type of variables you are going to use on it. The interpreter of Python does that and runs a thorough check during the compilation process. Therefore, Python is quite similar to the English language, and so it is easier to code and understand. Also, there isn't any such need to use brackets in Python that make the code much more user friendly for beginners.

Java, on the other side, sticks to strict syntax rules set by its interpreter. It is more of a static type of language where the programmer has to explicitly declare all the types of variables he/she is going to use. If those variables are an anomaly, then the code will hesitate to compile at the end. Thus, it gets a little difficult for beginners to write code on JAVA. 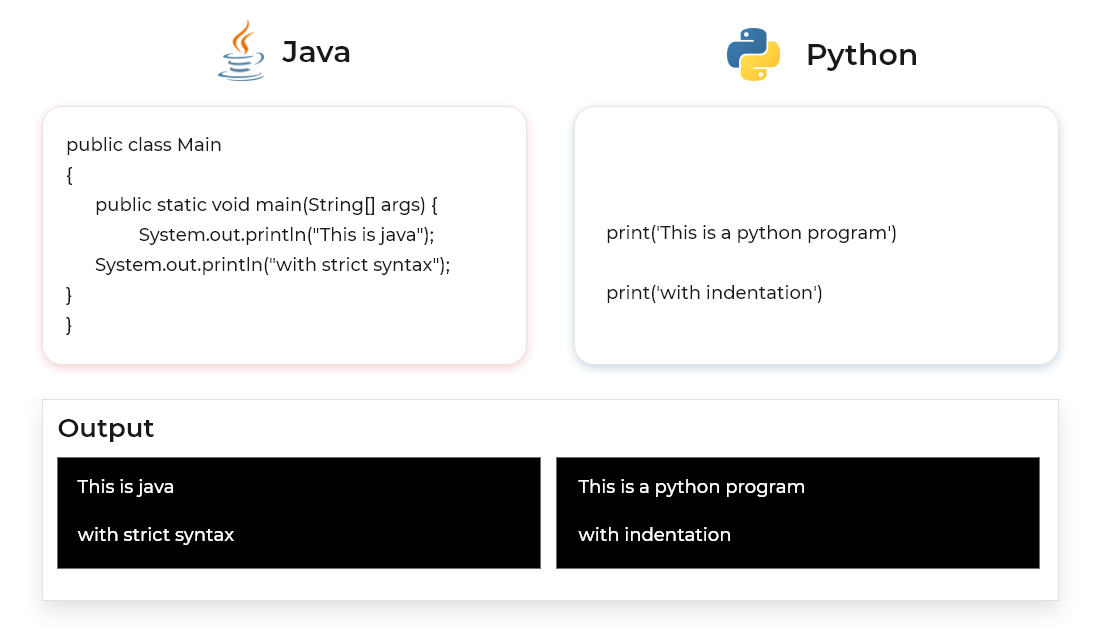 Programming languages are not like Cars, where you can, simply, differentiate between the two by putting their speeds into comparison. Nonetheless, to know more about the difference in performance between JAVA and Python, you can head to the benchmarks game where both of them have been benchmarked based on their speed factor. However, you should always keep this in mind that performance is not the only factor that makes a language's execution speed faster. What really makes a programming language perform better is the application you will develop with it and the third-party libraries that the language has support for. 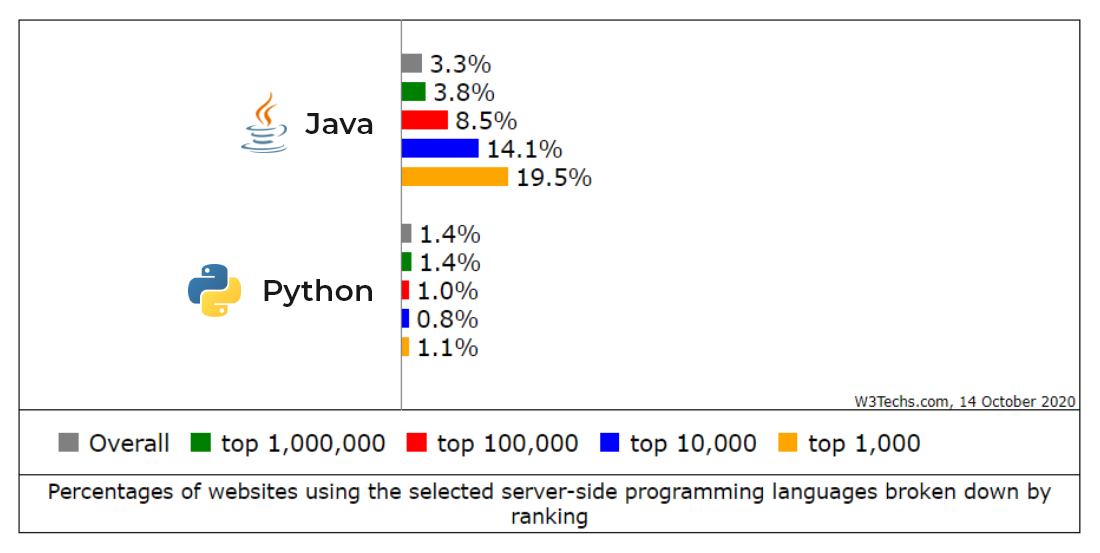 Which One Is Better for Machine Learning?

As you came across this fact above that Python follows a dynamic syntax, it gets much more comfortable for the developer to use it in its entirety. It also became one of the most preferred options for people from different backgrounds to try their hands-on coding and to know more about machine learning and bring the power of artificial intelligence in the projects they were working on in their respective field of work. Additionally, with an extensive ecosystem and large library, Python has to be the most used language for the development of AIs using ML.

On the other hand, Java also remains a great option to write codes on it for ML. The debugging options of Java is a lot easier, and thus have its use for large-scale applications.

Which One Is Better for Data Scientists?

For starters, none of the programming languages standing in today's day is of less importance concerning their demand and jobs associated with them. As the world is becoming smarter with every passing day, our applications are also getting dependent on powerful programming languages. In that case, learning both Python and JAVA today will land you a decent job. Talking about the salary packages you are going to receive, it depends on how skillful you are with the language. Nevertheless, it is always better to first master the language first before thinking about how much you are going to earn from it. 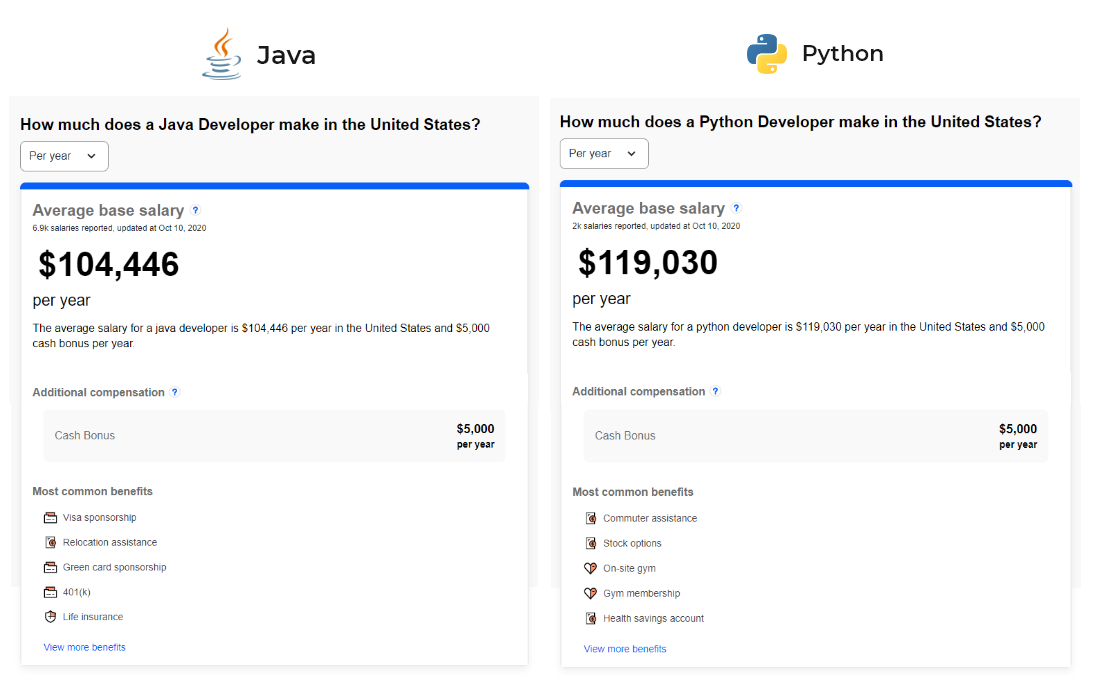 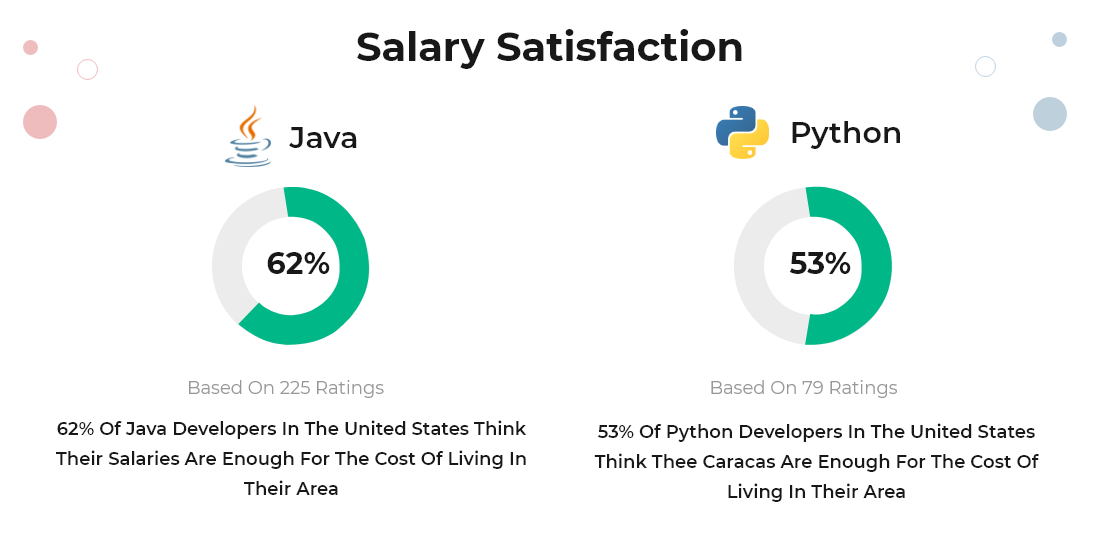 So as you came across this article, you would have understood that both Python and Java are popular, and at the same time, quite powerful programming languages to consider in 2021. Also, perpetual resources available for training purposes concerning both the languages will make the learning process for beginners a seamless one. Based on your business purpose and product requirement, you can choose an ideal programming language for you.