The class java.util.Observable has been with us almost since the beginning (since Java 1.0). As of JDK 9, however, it will be marked as deprecated. The following screen snapshot shows a portion of this class's Javadoc representation in a web browser.

This is an example of a class that in the category "Deprecated With No Plans for Removal" described in my previous post. The presence of since() provides information on when it was deprecated (JDK 9) and the absence of forRemoval() indicates a lack of concrete plans to actually remove the class. The java.util.Observer interface has also been deprecated in a similar manner and its documentation references the documentation for the Observable class. 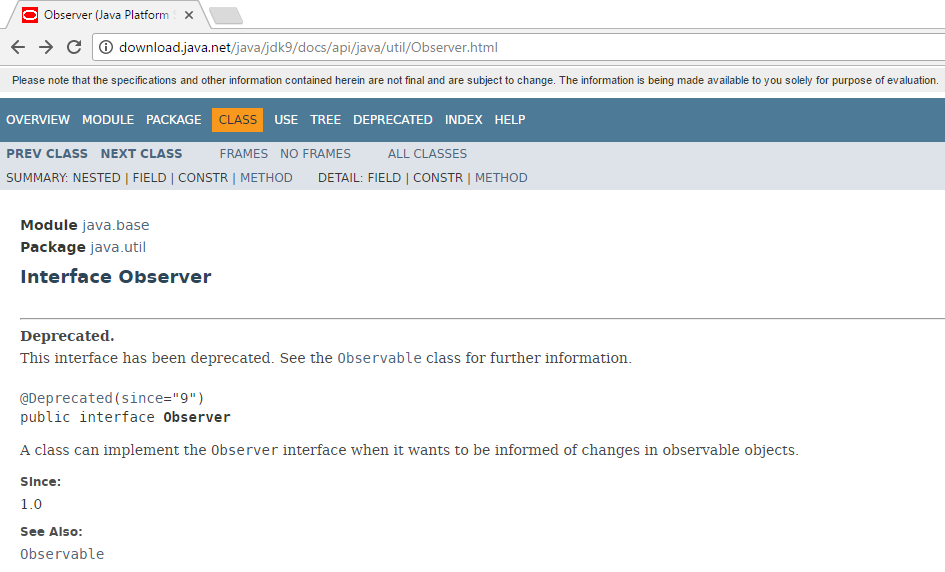 Not only does the Observable documentation relay when it was deprecated, but it also documents the problems with Observable that make deprecation desirable and provides important information on alternatives that might be used instead of Observable:

This class and the Observer interface have been deprecated. The event model supported by Observer and Observable is quite limited, the order of notifications delivered by Observable is unspecified, and state changes are not in one-for-one correspondence with notifications. For a richer event model, consider using the java.beans package. For reliable and ordered messaging among threads, consider using one of the concurrent data structures in the java.util.concurrent package. For reactive streams style programming, see the Flow API.

Additional details justifying the deprecation of Observable and Observer can be found in JDK-8154801 ("deprecate Observer and Observable"). There is a quote in there from Josh Bloch as part of JDK-4180466 ("Why is java.util.Observable class not serializable.") dated February 1999:

For the most part, it seems that Observer and Observable are not used much, so deprecation shouldn't be much of an issue, especially given no definitive plans to remove these altogether.