Late last fall, the Weave Online User’s Group (WOUG) had a session on two of the most popular Kubernetes installers out there today. Chris Love (@chrislovecnm) spoke about what kops is and how to use it. Lucas Kaldstrom (@kubernetesonarm) then spoke about the architecture of kubeadm and why you’d choose one method over the other, including the differences between the two projects. Both of our speakers are very active community members and leaders of their respective Kubernetes SIGs.

Kops stands for Kubernetes operations. The tagline for the project is that it’s “the easiest way to get a production-grade Kubernetes cluster up and running”. Kops is sometimes referred to as the ‘kubectl’ for spinning up clusters.

Kops lets you create, destroy and upgrade Kubernetes clusters and is supported on AWS (Amazon Web Services, we cover more of this on our Kubernetes on AWS - what you need to know page) with GKE in beta support, and VMware vSphere in alpha.

Kops on the Google Cloud Platform

According to Chris, using Kops on the Google Container Platform (GCP) is different from spinning up a cluster in Google Kubernetes Engine (GKE) which is Google’s hosted and managed Kubernetes solution.

Chris recommends examining your particular use case before deciding which install option to use. For example, if you have 30 basic microservices, and you are not doing anything special, Google’s managed service, GKE is a viable choice. But if you are running Cassadra stateful sets that are 32 gig heaps, you may need to make some tweaks. For example, if you want to set horizontal pod autoscaling, you can do that in GCP, but not so easily in GKE. If you need a more dynamic installation that can be highly customizable then kops is the product to use with GCP.

Steps for Running Kops on GCP

These are the basic steps for creating a cluster.

For step by step installation instructions see: Getting Started on GCP with kops 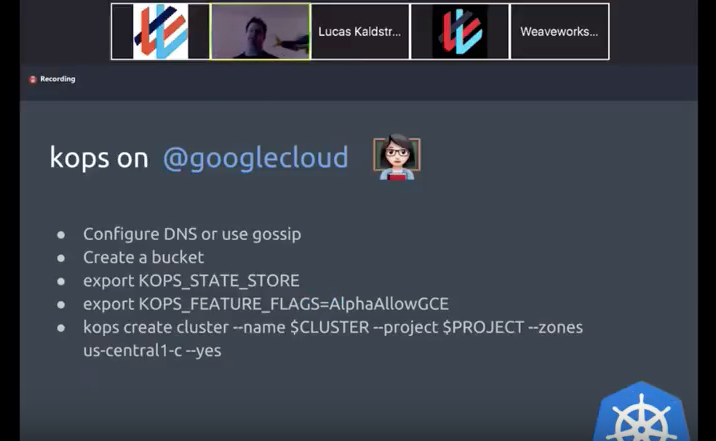 With only three commands you are done and you’ve started creating a cluster. It takes about five minutes for a cluster to be set up. Kops sets up SSH access for you and it also creates the DNS entries. If you are using AWS, kops supports spinning up clusters with manifests as well.

As of today, kops is still not production ready for Google Cloud and it is in Beta. Check their github project for when it will be officially released.

Lucas Kaldstrom one of the Kubernetes maintainers for kubeadm talked about some of the internals of Kubeadm and also future plans for its ongoing improvements.

Kubeadm is a toolkit for bootstrapping a best-practises Kubernetes cluster on existing infrastructure. Kubeadm cannot provision your infrastructure which is one of the main differences to kops. Another differentiator is that Kubeadm can be used not only as an installer but also as a building block.

Kubeadm sets up a minimal viable cluster. It is designed to have all the components you need in one place in one cluster regardless of where you are running them.

An advantage of kubeadm is that it can be used anywhere —even Raspberry Pi— to set up a cluster and try it out before committing to something like kops. 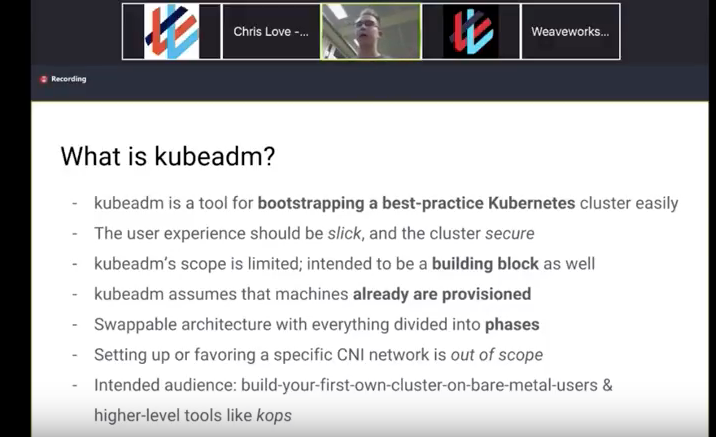 As mentioned, kubeadm sets up a minimally viable cluster for your use. In the diagram below starting from the bottom, this is what a cluster with kubeadm looks like: 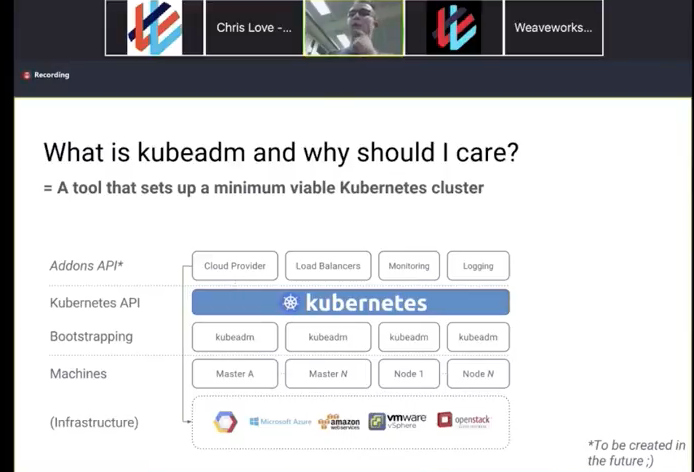 The projects are not direct competitors, but instead complement each other.

Creating a Cluster with Kubeadm

Creating a cluster with kubeadm requires only a few commands:

See Using Kubeadm to Create a Cluster for step by step instructions. 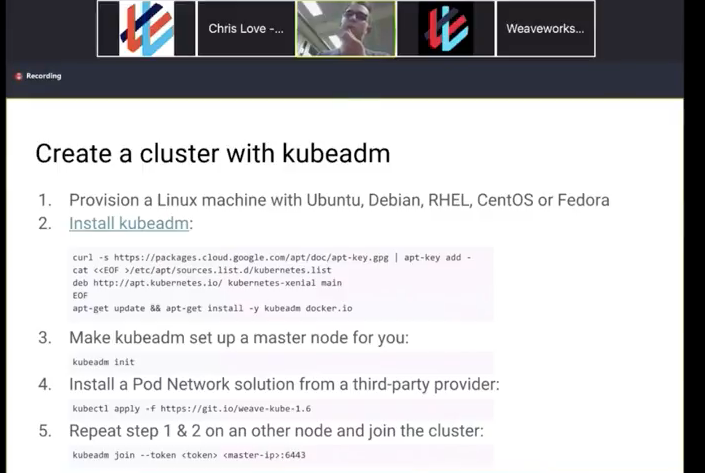 Chris Love gave us an overview and an update on kops and demonstrated how to spin up a cluster on GCP and on AWS.

Lucas Kaldstrom, a maintainer of Kubeadm, described how kubeadm works and how it differs from kops and how the two projects are complementary.

Watch the video in its entirety here:

For more talks like these, join the Weave Online User Group.

What Is the Difference Between Metrics and Events?