This is another article about the NXP MCUXpresso IDE (see MCUXPresso IDE: Unified Eclipse IDE for NXPs ARM Cortex-M Microcontrollers), this time it is about Post-build steps. Post-build steps are custom actions that can be executed after the build (or link phase), and are typically used to generate S-Record, Binary or Intel Hex files (see S-Record, Intel Hex, and Binary Files). 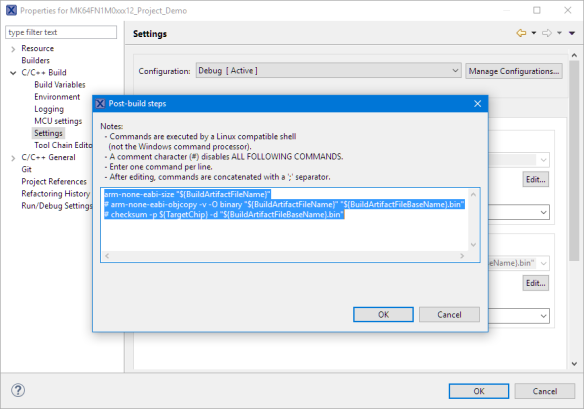 This post shows how to do the same in the MCUXpresso IDE, either using post build steps or using a context menu on the executable file.

The post build steps can be found under the C/C++ Build project settings, under the ‘Build Steps’ tab. 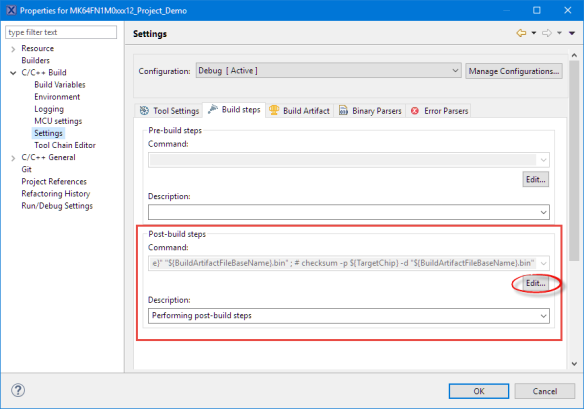 Pressing the ‘Edit’ button opens a dialog where I can edit the actions:

The default probably shows the following:

The first command (arm-none-eabi-size) prints code size information (see text, data, and bss: Code and Data Size Explained), with an output something like this in the console view:

If there is a line starting with ‘#’, then everything following that will be ignored: That line plus all the lines which follow. Remove the ‘#’ to have the command executed.

To generate a binary file, use

To generate Intel Hex, use the following:

A description of all options for the GNU objcopy program can be found in https://sourceware.org/binutils/docs/binutils/objcopy.html

To change the length of S19 lines, the option...

I can use multiple commands, such as the example below, which will produce S19, Intel Hex, and Binary files: 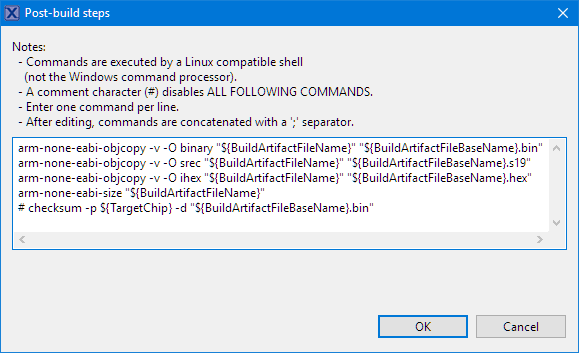 The command execution can be checked in the console view:

The files get generated into the build output folder:

Other than that, have a look at the (excellent) electronic documentation, using the menu Help > MCUXpresso IDE User Guide:

Then you search for what you are looking for: 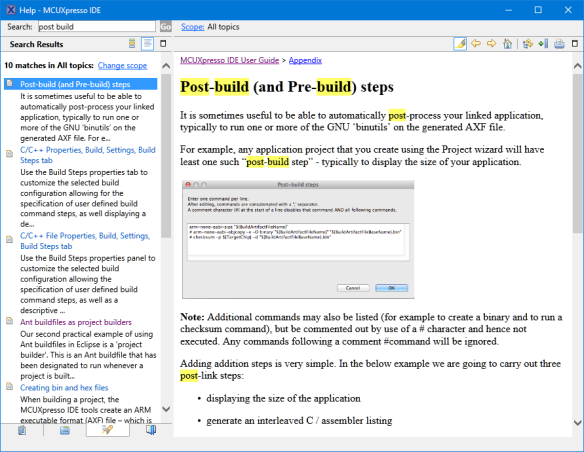 If I only need a binary or Intel Hex file right away without using a post build step, I can use the ‘Binary Utilities’ menu. It does not have the ability to generate S19 files, but is otherwise very useful:

Make sure you select a binary (ELF/Dwarf .afx) file, otherwise the menu does not show up.

The interesting thing is that these menus are configurable, under the menu Window > Preferences > MCUXpresso IDE > Utilities: 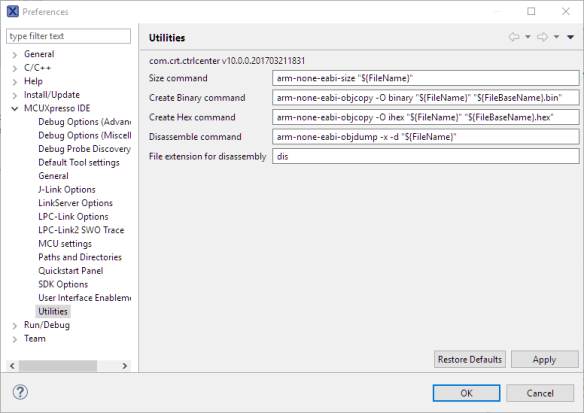 Make sure to use a semicolon *plus a space* as separator. A semicolon alone will give an error message.

Creating both Hex and S19 Files

The settings are part of the workspace settings, so if you want this for multiple workspaces, you have to export/import the settings or do it in each workspace.

The MCUXpresso IDE has a versatile way to generate binary, S19, or Intel Hex files using post-build steps. For creating hex and binary files ‘ad-hoc’, I can use the Binary context menu on the ELF/Dwarf executable file. As a bonus feature, I can change the Binary Utilities commands.

And if you want to generate more advanced files or generating complex checksums, have a look at the ‘SRecord’ tool described in my other article: CRC Checksum Generation with ‘SRecord’ Tools for GNU and Eclipse.