The two-phase commit protocol was designed in the epoch of the “big iron” systems like mainframes and UNIX servers; the XA specification was defined in 1991 when the typical deployment model consisted of having all the software installed in a single server. Surprisingly enough, a consistent part of the specification can be re-used to support distributed transactions inside a microservices-based architecture. This post explains how LIXA and XTA enable the development of polyglot distributed transactional systems.

In brief, the two-phase commit protocol [1] is a specialized consensus protocol that requires two phases. The first phase, the voting phase, is where all the concerned resources are asked to “prepare”: a positive reply implies that a “durable” state has been reached. The second phase, the commit phase, confirms the new state of all the concerned resources. In the event of an error, the protocol rolls back and all the resources reach the previous state.

One of the most common implementations of the two-phase commit protocol is the XA specification [2]: it has been supported by many middlewares developed during the Nineties and it’s leveraged by the JTA specification [3].

The usage of the two-phase commit protocol has been debated a lot since its inception. On one side, the enthusiasts tried to use it in every circumstance; on the other side, the detractors avoided it in all the situations.

A first note that must be reported is related to performance: with every consensus protocol, the two-phase commit increases the time spent by a transaction. This side effect can’t be avoided and it must be considered at design time.

It’s even common knowledge that some resource managers are affected by scalability limits when they manage XA transactions: this behavior depends more on the quality of the implementation than on the two-phase commit protocol itself.

The abuse of two-phase commit severely hurts the performance of a distributed system, but trying to avoid it when it's the obvious solution leads to baroque and over engineered systems that are difficult to maintain. More specifically, the integration of already existing services requires serious re-engineering when both the transactional behavior must be guaranteed and a consensus protocol like the two-phase commit is not used.

Many authors discourage the usage of both the XA standard and the two phase commit protocol in the realm of microservices; the reader can find some posts in the References section [4].

Anyway, this post provides some development tools that support distributed transactions; the reader can try them in few minutes and evaluate the opportunity to reuse them.

LIXA is a transaction manager that implements the two-phase commit and supports the XA specification. It’s a free and open source software licensed under the terms of the GNU Public License and the Lesser GNU Public License; it can be freely downloaded from GitHub and from SourceForge [5].

XTA stands for XA Transaction API and it’s an interface designed to support contemporary programming needs: it reuses the core components developed by the LIXA project and it introduces a new programming model (see below). XTA is currently available for C, C++, Java, and Python; it can be compiled from source code and installed in a Linux system or it can be executed as a Docker container. 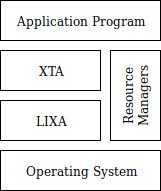 The above diagram shows the main picture about XTA architecture: independently from the programming language, the “Application Program” interacts directly with XTA to manage transactions and with one or more “Resource Managers” to manage persistent data. Typical resource managers are MySQL/MariaDB and PostgreSQL. 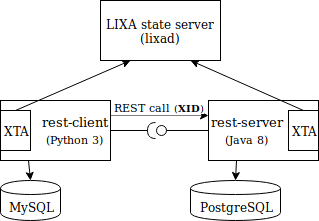 The above diagram shows the high-level architecture implemented by the example explained in this post:

All the components are executed as Docker containers [6] for the sake of easiness, but a traditional installation can be done as well.

Before starting, you need an operating system with two fundamental tools: git and Docker. Both are available for free and are easy to set up in Linux, MacOS, and Windows.

First of all, clone the git repository that contains all you need:

Then go to the example directory:

Check the built images, you should see something like:

Check the started containers, you should see something like:

Wait for the service readiness and the check the following messages in the console:

At this point, you should have some messages in the console of the Java service:

And some other messages in the console of the Python client:

The remaining steps repeats the same actions for the second SQL statement (“INSERT”).

The client/server example described above implements one of the patterns supported by XTA: “multiple applications, concurrent branches/pseudo synchronous.” 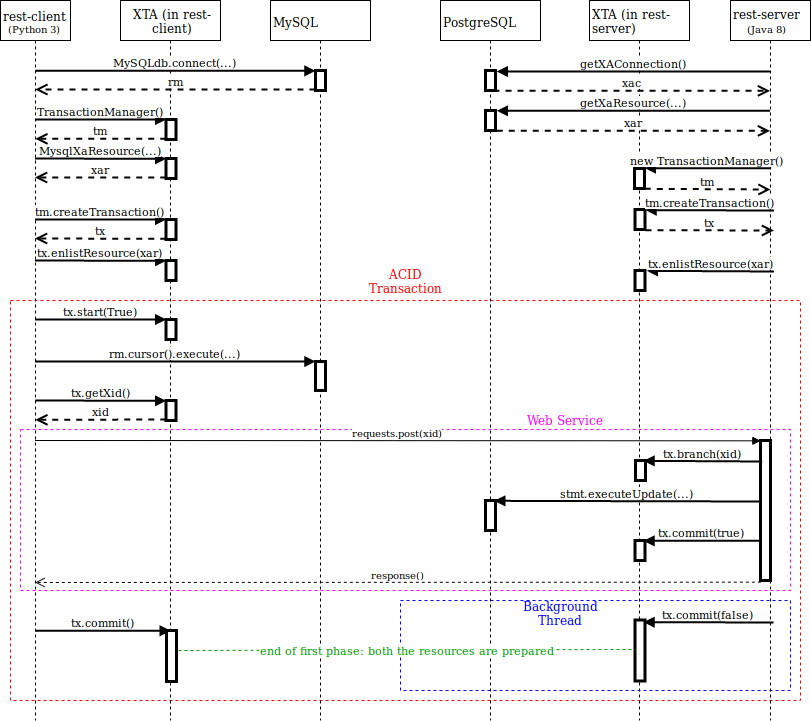 The above diagram describes the interactions between the client and the server.

The transactional part of the sequence diagram is delimited by a red dashed box.

The magenta dashed box contains the REST call and the first phase of the commit protocol: tx.commit()  is called passing true as the value for “non-blocking” parameter.

The blue dashed box contains the second phase of the commit protocol.

The diagram does not show the interactions among “rest-client,” “rest-server,” and the LIXA state server:

In the event of a crash either on the client side or on server side, the parties rollback or automatically recover a second time: the explanation of these scenarios is left for a future post.

The below pieces of code are provided to show how XTA objects and methods must be used.

Ignoring boilerplate and scaffolding, here is the interesting part of the Python client source code:

Ignoring boilerplate and scaffolding, the example uses the Jersey framework, here is the interesting part of the Java server source code:

LIXA has been designed and developed with a clear and well defined architecture: all the transactional information is persisted by the state server (lixad), most of the transactional logic is managed by the client library (lixac and its derivatives). The strong decoupling between the “logic” and the “state” enables the embedding of the transaction management capabilities in the “Application Program” without requiring neither frameworks nor application servers.

XTA pushed the concept of “distributed transaction” a step further: client and server don’t have to be executed by any sort of “supervisor middleware” because they coordinate themselves autonomously interacting with the LIXA state server. The only information that the client must pass to the server is the ASCII string representation of the XID. Other approaches implemented in the past required configuration and coordination among application servers; most of the times, even the communication protocols had to be aware about the transactionality aspects.

Furthermore, XTA supports multiple client/servers in the same global transaction: the same XID can be branched by many called services, even hierarchically.

The XTA API in conjunction with the LIXA state server enables the development of systems that implement ACID [7] distributed transactions among 2 or more applications (services). XTA enables the development of polyglot transactional systems that use multiple resource managers and any communication protocol without requiring some sort of application manager.