Microsoft® Robotics Developer Studio 4 is a freely available .NET-based programming environment for building robotics applications. It can be used by both professional and non-professional developers as well as hobbyists.

Microsoft® Robotics Developer Studio 4 enables hobbyists and professional or non-professional developers to create robotics applications targeting a wide range of scenarios. This release is an update that has the functionality of the previous RDS 2008 R3 Standard Edition with the addition of support for the Kinect sensor and a defined Reference Platform, also referred to as MARK (Mobile Autonomous Robot using Kinect).
Microsoft Robotics Developer Studio can support a broad set of robotics platforms by either running directly on the platform (if it has an embedded PC running Windows) or controlling the robot from a Windows PC through a communication channel such as Wi-Fi or Bluetooth®.

In addition to providing support for Microsoft Visual Studio 2010, Microsoft Robotics Developer Studio 4 provides a Visual Programming Language (VPL) which allows developers to create applications simply by dragging and dropping components onto a canvas and wiring them together.

To help developers getting started, Robotics Developer Studio contains extensive Documentationand a large set of samples and tutorials that illustrate how to write applications ranging from simple "Hello Robot" to complex applications that simultaneously run on multiple robots.

"excitement with Microsoft Kinect within the robotics space signaling the potential opportunities that exist in transforming robots to low-cost mainstream consumer devices. RDS 4, with support from the Kinect sensor, aims to make it easier for developers to build applications, including those directed at personal robotics and consumer scenarios, both in hardware and in simulation.

Here is an example of what can be done with RDS 4: 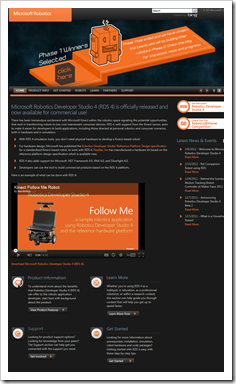