Continuous integration (CI) and continuous delivery (CD) defines a practice that enables application development teams to deliver code changes more frequently and reliably. The implementation is also known as the CI/CD pipeline. CI/CD is one of the best practices for DevOps teams to implement. It involves continuously building, testing, and deploying code changes at every small cycle, reducing the chance of developing new code based on bugged or failed previous versions.

For this example we will use the below applications to implement the CI/CD framework for deploying Mule 4 applications into CloudHub:

Below diagram describes the CI/CD flow: 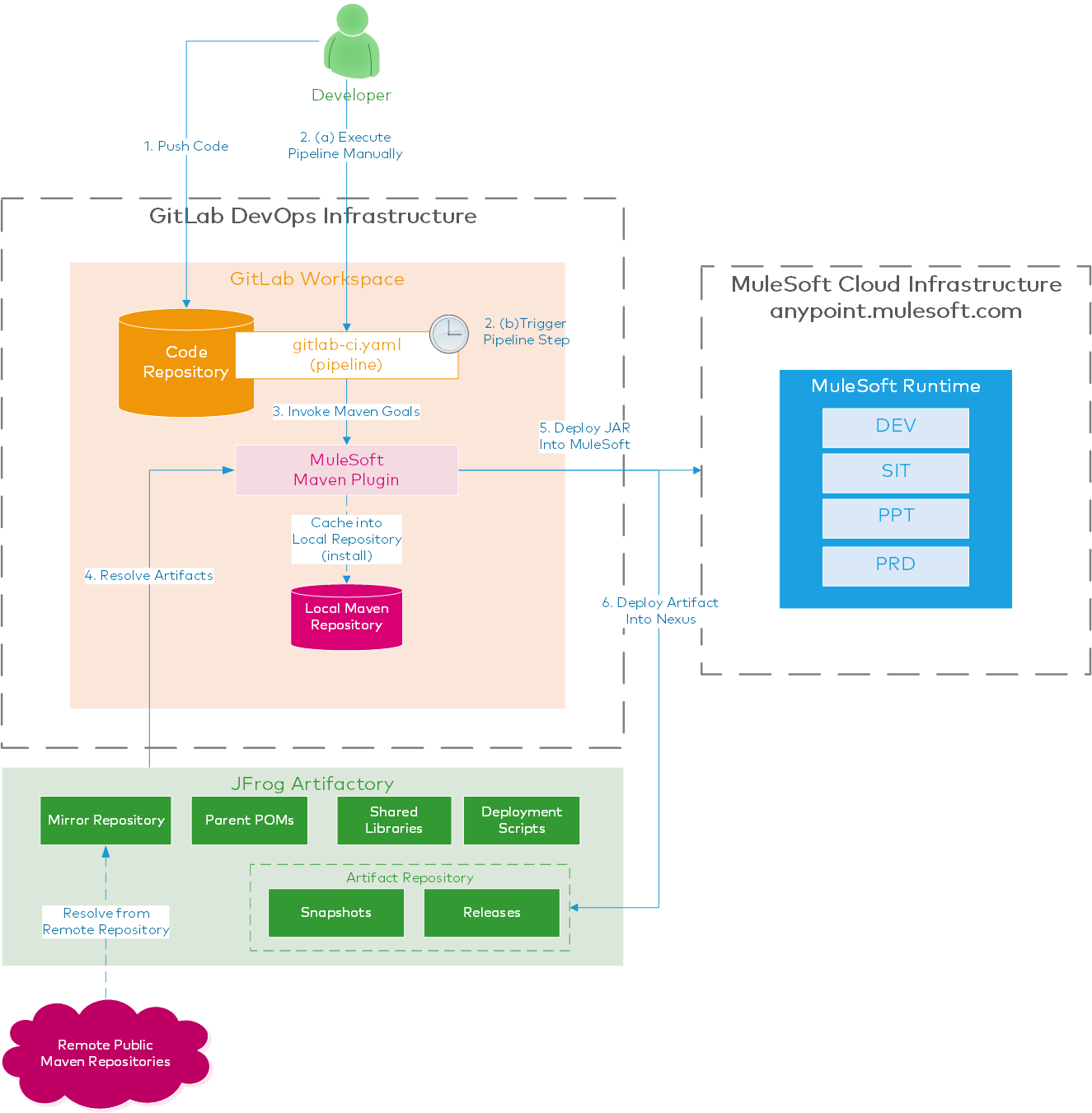 To install GitLab EE and JFrog in your workstation please follow the steps mentioned in the below links:

GitLab acts as a code repository as well as the CI/CD execution engine, we will leverage the GitLab CI feature which allows the creation of pipeline scripts to deploy the application by cloning from the code repository, compiling it, running MUnit (optionally) and finally deploying into the CloudHub. The component which executes the pipelines is called a GitLab Runner.

Artifactory is required for resolving dependencies required for building your application. For example, a Parent POM file, or a shared library. It is also used as a mirror for multiple remote repositories using a single virtual artifactory repository.

Step 1: Set Up Your Artifactory

3. Now edit your <<User Home>>/.m2/settings.xml if the file doesn't exist copy from <<Maven Home>>/conf to resolve all your dependencies using the artifactory mirror:

4. Encrypt the passwords of the artifactory users in the Maven settings.xml following the steps mentioned in the Apache Maven website:

Note that the jfrog_mirror is the id of the mirror configuration. The other two credentials will be used later when we mention the artifactory as the distribution management server in the POM files.

This settings.xml needs to be shared with the Developers so they use it in their local workspace so you may use a different user instead of the admin which has sufficient privileges.

Step 2: Set Up a GitLab Runner With Shell Executor

GitLab Runner is the open-source project that is used to run your jobs and send the results back to GitLab. It is used in conjunction with GitLab CI/CD, the open-source continuous integration service included with GitLab that coordinates the jobs. Main features of the GitLab runner are:

According to your platform follow the steps mentioned in the GitLab website to install the GitLab runner in your server. 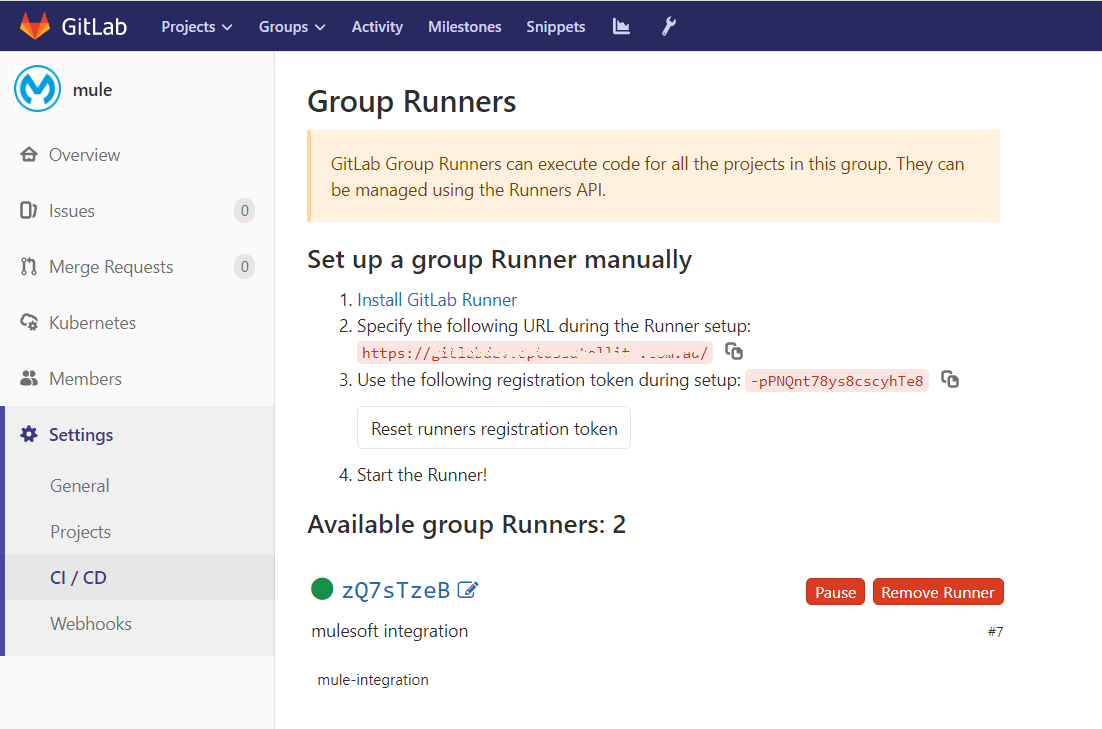 Step 3: Create a Parent POM and Deploy Into Artifactory

Maven parent POM (or super POM) is used to structure the project to avoid redundancies or duplicate configurations using inheritance between pom files. It helps in easy maintenance in the long term. In our example, we will use it to maintain the Mule Maven Plugin configuration.

1. Mention your artifactory host and port in the parent pom file. Note the properties mentioned in the CloudHub maven deployment plugin such as ${MULE_ORG}, ${MULE_USER}, etc. These will be configured in GitLab and should not be hard-coded in the POM file.

2. In Step 1 we created the credentials for the server — jfrog_release so make sure the same is mentioned in the <id> element of the distribution management repository in the parent pom.

3. Deploy the Parent POM file into the artifactory using the below maven command.

After the application is deployed the properties will be masked as shown below: 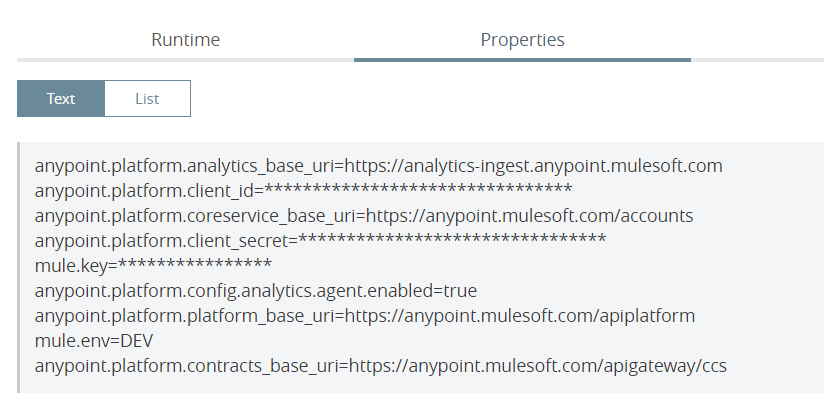 Check the GitLab documentation for the details: https://docs.gitlab.com/ee/ci/yaml/

In our case, we will define the GitLab-ci.yml as below:

Similarly, you can include subsequent stages to deploy your Mule application to SIT,  UAT, and Production environments.

This is a practical example of a CI/CD framework using GitLab pipelines as well as JFrog artifactory. Using this approach we could demonstrate the use of GitLab both as a code repository as well as a CI/CD platform. Since we could utilize the pipeline feature of GitLab we didn't require an automation server like Jenkins to execute the CI/CD jobs. This framework can be further enhanced to execute MUnit test cases, perform code analysis, deploy compiled JARs into JFrog artifactory, or integrate with automated testing tools.