The Mule Connect 2020 virtual conference is over and we got to hear more details on MuleSoft’s vision for service mesh, and it shows that even a market leader for integration can miss the mark from time to time. Let’s walk through MuleSoft’s vision for Anypoint Service Mesh and explore why their vision for this tool is not one you should embrace.

The key take-away I got from the description of Anypoint Service Mesh is that you point it at your an instance of Istio, either your own or one managed by Mule, and then you can manage the Istio microservices in Mule. This allows all the features of Mule’s API management to be applied to your Istio microservices, including:

Furthermore, Istio already provides security, tracing, traffic policy enforcement, etc. Why would I want to layer Mule on top of Istio to do what Istio already does?

That leaves the first bullet as the Anypoint Service Mesh’s only value proposition: discoverability and maximizing reuse across the enterprise. The problem is that this is an anti-pattern for microservices, and so MuleSoft is encouraging us to implement something worse than a monolith. To understand why this is a terrible idea, we must recall the value proposition of microservices and domain-driven design.

Microservices — Reuse Is Not the Goal

The goal of microservices is to increase the speed teams deliver change and improved scalability in serverless environments. This is because they have these traits:

It’s the loosely coupled part MuleSoft gets wrong. Microservices are meant to be private internal components of an application, not its first-class public interfaces. You can think of microservices as what classes and private libraries are to monoliths. Not a perfect analogy, but close enough. Imagine if you made all your classes and all their members public for everyone across your enterprise to reuse, and created a directory encouraging this reuse? This would be the opposite of “loosely coupled.”

To see how this plays out, imagine if your microservice had a web of dependencies across your enterprise. How quickly could your team make changes to that microservice? The regression testing to a backward-compatible change would be large, but if you need to break the interface then you now have quite a significant effort in front of you requiring coders and testers from across your company. So much for moving fast!

For example, consider a book store. Within the context of the warehouse, a “book” may have a title, author, UPC, inventory count, weight, wholesale price, and delivery destinations. Within the context of a retail store, the concept of weight, wholesale price, and delivery destinations are irrelevant. Instead, the retail store cares about genre and retail price, both of which are irrelevant to the warehouse.

When applied to microservices, the general rule is that microservices should not be accessible beyond the scope of its bounded context. Otherwise, it is no longer tightly scoped and loosely coupled. A microservice that knows both a warehouse’s definition of a book and a retail store’s definition of a book is instead loosely scoped and tightly coupled between two contexts. Now the IT team that supports the warehouse business unit cannot make rapid changes without impacting the retail business unit and vice versa.

North-south traffic is the traditional API model most of us are accustomed to. One team manages the API server endpoint while a myriad web of other teams, if not external partners and customers, manage the client endpoints. 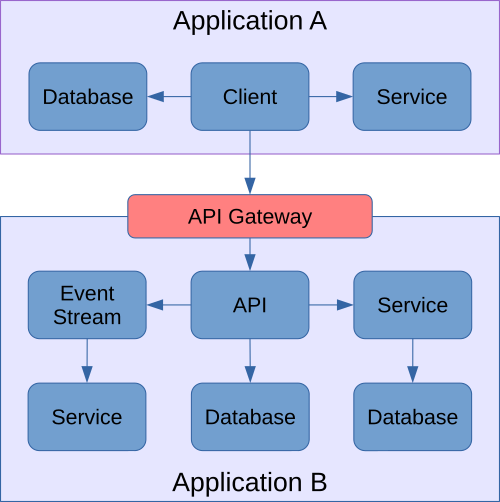 North-south traffic crosses application or context boundaries via an API gateway. API management tools arose to help the API service team support and secure those endpoints via API gateways and manage the API client experience with API directory portals and so forth. This works well when the goal is to create an interface for any number of future unknown clients and manage your relationship with those clients. This is what MuleSoft excels at.

East-west traffic either is connections between two modules of the same application or at most between related applications within the same bounded context. This means they are all supported by the same operational support team or at most the same IT department if the application is too large for one team. 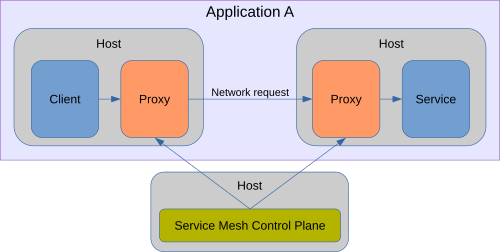 East-west traffic connects components within the bounds of one application or context.

Unlike APIs, both the client and server endpoints of all these connections are owned by the same team or department. Hence service meshes have arisen to help these teams manage and secure both endpoints of these east-west connections via proxies like Envoy managed by a control plane like Istio.

One of the key points of breaking up a monolithic application into microservices is so that teams can more rapidly make changes by being loosely coupled from other services.

Ideally, the team doesn’t make breaking changes to its microservices due to that loose coupling. But if they do, they own the clients, and so they just also change the clients. Done. Imagine doing that with APIs servicing sundry clients strewn across the enterprise and business partners! The moment you expose your microservices for use by your enterprise, you have eliminated the core value proposition of microservices: loose coupling to enable rapid change.

This is the key point MuleSoft misses. The value proposition of microservices is not reused! It is agility and scalability. There are significant challenges in making a microservices architecture successful that causes many IT departments not to invest in them, believing the challenge outweighs the benefits. Thus you must reap those benefits lest you end up with more harm than good. If you follow MuleSoft’s advice, you will end up with all the challenges of microservices with very little of the benefit!

MuleSoft belongs between applications, not inside them.

What MuleSoft seems to be missing with this half baked Anypoint so-called “Service Mesh” is that microservices are not integration. In our monoliths, we had compiled functions and the call stack. We replaced (some) functions with microservices and the call stack with the network. What remains unchanged is that both a function and microservice represent the internal composition of an application, not integration between applications.

MuleSoft needs to stick with what they do best: integration.

Published at DZone with permission of David Mooter . See the original article here.