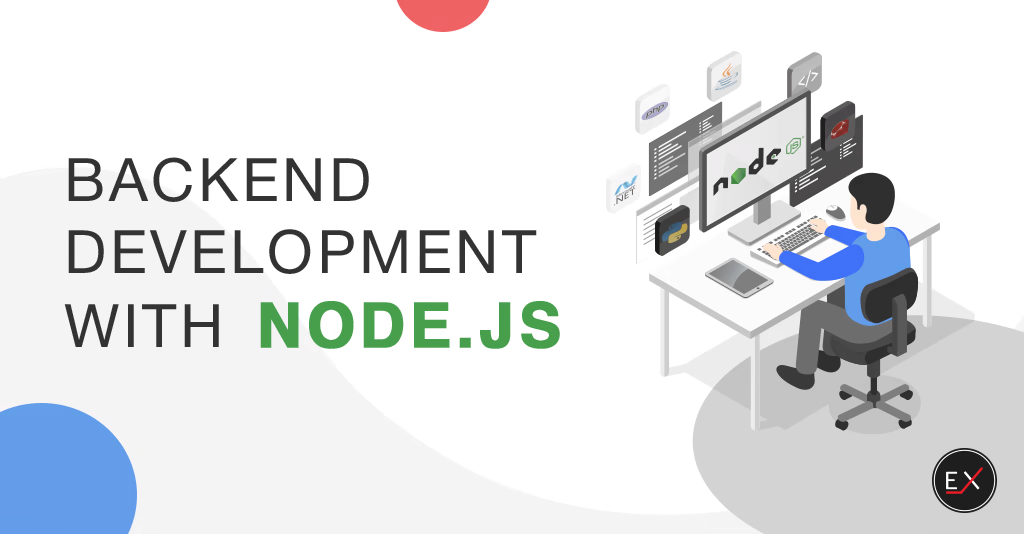 Node.js backend development has become extremely popular among software developers. In order to keep up with modern technologies, it is necessary to know what is Node.js, what are the reasons to use it, where to hire developers, etc. Answers to these questions will be discovered in this article.

Node.js back-end development is nothing new and you can find its implementation in many products like Netflix or PayPal. It has many advantages, which make it suitable for both enterprise and B2C applications and is popular among the software engineering community. But what makes it so attractive from both technology and business points? In this article, we’ll try to answer this question.

There are probably no programmers in the whole world who are not familiar with the concept of JavaScript. Its popularity has risen significantly, and some tasks in web development we couldn’t even imagine doing some years ago, are now easy to perform with JavaScript. JS is a default choice and having the backend technology that is also powered by JavaScript is a great way to speed up development, make it more time, and cost-effective via the unification of the codebase.

If you are familiar with programming, which you most likely are, you’ve definitely heard about Node.js backend development. Anyway, to avoid any confusion, let’s state that Node.js is a so-called framework, a runtime environment for running JavaScript code on the back of a browser, or outside of it. JS, as a programming language, has drastically changed web development and has been successfully used by IT specialists all over the world since 1995. 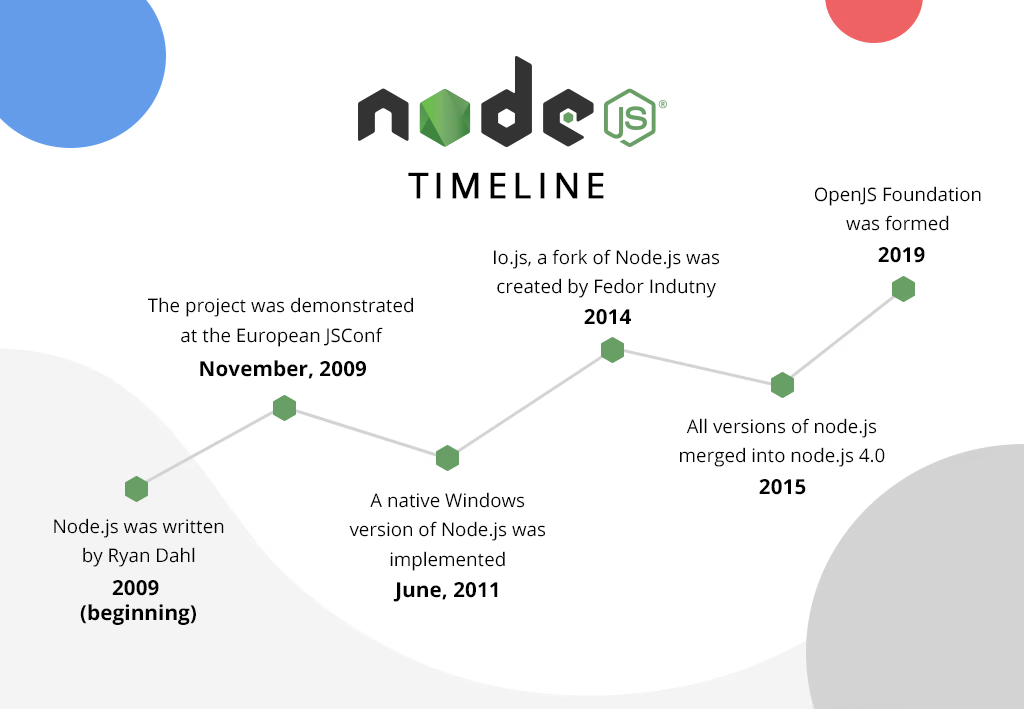 It begs the question, what has made Node.js so popular and actively used among programmers? First of all, despite the fact that JS has always had many great frameworks and libraries, it never had any backend platforms, which were able to compete with other entrenched languages. Node.js has solved this issue, and a big number of startups and enterprise-level projects now use it for various purposes.

The researchers state that using Node.js for backend and other tasks is able to enhance their applications’ performance. This claim has become so popular in the IT-sphere that many programmers decided to change their codes’ languages to Node.js. This may be caused by the fact that many giants like NASA, Twitter, Microsoft, and others use it.

What Is Node.js Used For?

We already stated that Node.js is used for writing in JS but let’s clarify this concept a little bit. A runtime environment covers the category of software that allows programmers to write and edit code for future applications and run them. Different sources give us different definitions of Node.js but all of them say, in simple words that it is a platform used for building apps in JavaScript.

To realize the main conception of Node.js better, let’s look at its principal characteristics:

Node.js server-side processes are operated in such order:

Why Is Node.js Good For the Backend?

Now, when the perception of Node.js itself is clear, what is left is to figure out what backend development with Node.js constitutes. Speaking of web engineering, the backend of your app is perhaps the most significant part thus IT specialists should pay enough attention to it and use the best solutions to make it work properly. There are many benefits of Node.js for backend development that we’ll look at closely in this article. But firstly, let’s list the main competitors of Node.js among backend languages and frameworks.

PHP is widely used by programmers for backend development. It is most suitable for mid-sized projects but is also good enough for large ones. Numerous successful projects are made exactly with PHP. Its architecture is event-driven, which makes real-time connections impossible. However, it still heads many listings of programming languages due to its great supportive community.

Python is considered extremely easy to learn. Probably it makes it so popular among aspiring programmers. It is typically used for both mid-sized and large projects. Although Python does not always enable great performance, it can be easily solved with PyPy implementation. Generally, creating projects with Python is fast, productive, and has a great outcome.

Ruby is fit for small and mid-sized projects. It has clear documentation and a huge community that makes it so actively used among developers. However, in recent years Ruby and RoR framework, in particular, have significantly dropped their market share and which is the most important – popularity among the community, which means fewer updates and new implementations.

Java is considered a multipurpose programming language. The availability of numerous frameworks makes it even more demanded. It has a good reputation among IT specialists. Java is good for large enterprise projects that require complex computations and difficult data processing.

.NET is a powerful Microsoft framework that has a wide range of languages that are suitable for both backend and frontend development. Most effective is for small and medium-sized projects. .NET is free and works on different platforms, it supports services, website, and desktop development. 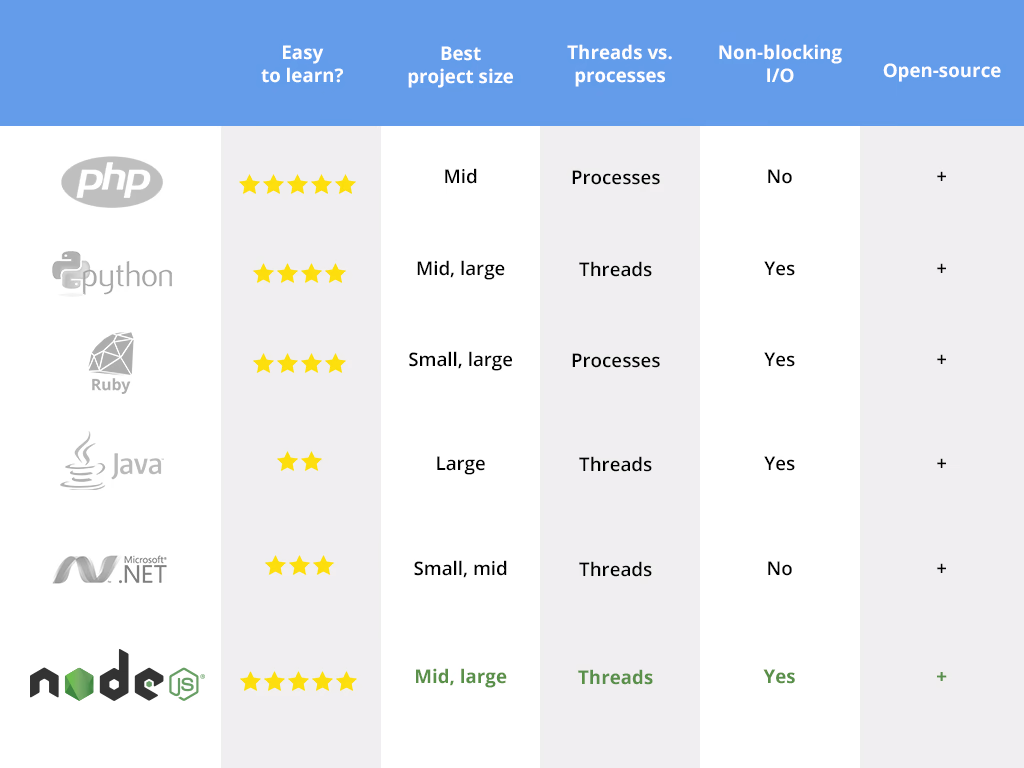 Other Cases Of Node.js Use

Many people think that Node.js is used only for web development but there are many other spheres where the best apps are developed with Node.js. Here are some examples:

As you can see, Node.js development covers much more spheres than web development including the backend. In addition, with the Node.js framework, even desktop applications can be created.

In spite of Node.js’ growing popularity, there are still some tasks, which are difficult to perform with it. Thus, many frameworks have been introduced to ease the work. Let’s look at the most popular ones: 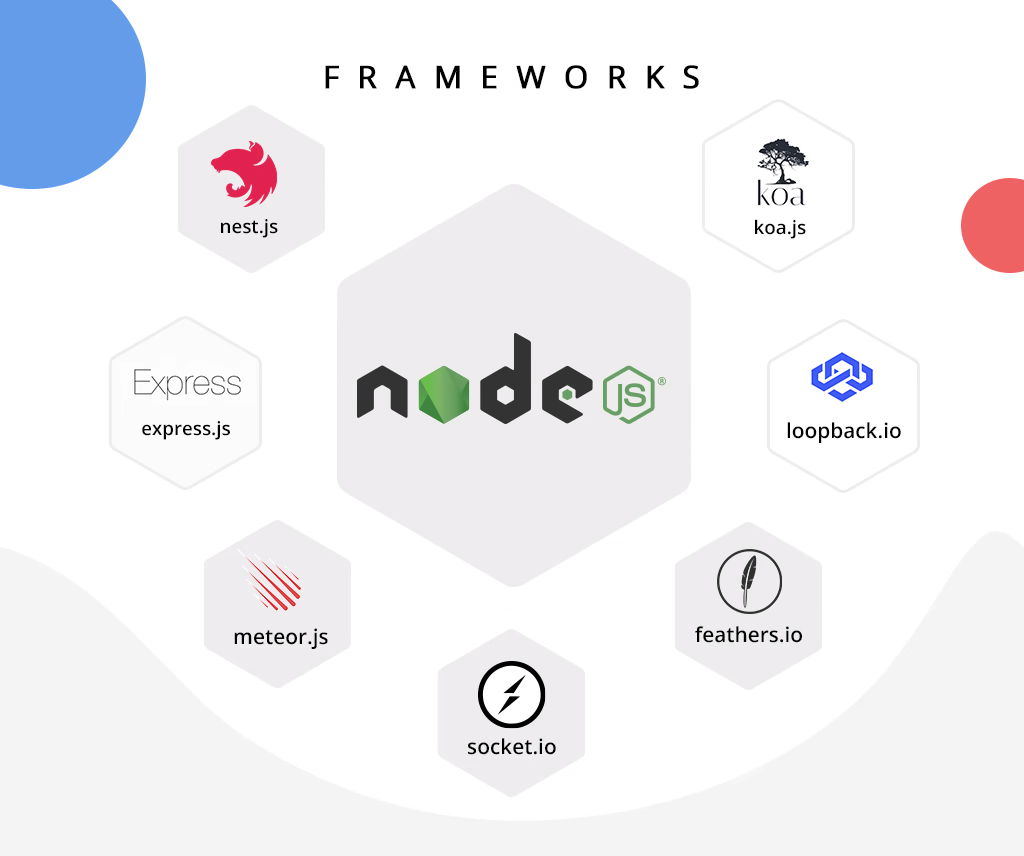 Among these frameworks, anyone can find the best Node.js framework that will address a specific project’s requirements and convey the best results.

We’re clear now about Node.js’ major characteristics, and what is left is to answer the question, is Node.js good for the backend and why use Node.js.

JS has gained great popularity for web engineering many years ago already but now its capabilities have grown even much with the help of Node.js backend framework. So now, with JS it is possible to build both server- and client-side applications with the same code. In addition, by using some frameworks like Electron, for example, it’s easy to create even software for desktop.

Node.js is great for real-time working with a large amount of information. Also, as HTTP requests and responses are basically a stream of large files, Node.js enables collecting and visualizing data as dashboards. For example, GraphQL can be used for this purpose. It works along with many programming languages but exactly Node.js made GraphQL a new standard. Generally, Node.js backend development is so concise because it provides many features that are impossible with other event-based environments.

Alongside, Node.js is very fast, keeps data in native JSON, has a huge supportive community of developers, performs data streaming on the highest level, is sponsored by Linux Foundation, provides excellent hosting options, and is suitable for developing software for various platforms. 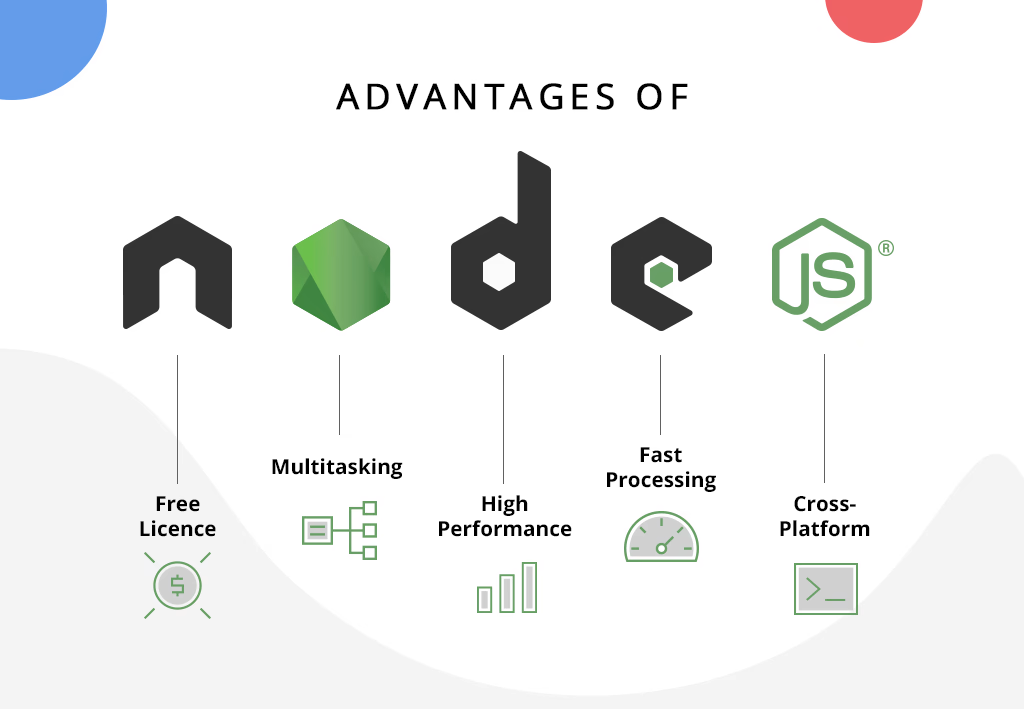 Node.js Performance: How Using Node.js Can Enhance The Apps’ Performance?

Speaking of Node.js advantages, many people first of all mention the lower cost of development and increased developers’ productivity. However, these are not all the pros. What is much more important is that applications’ performance benefits greatly from using exactly Node.js for the projects. There are such reasons for it:

Applications’ performance depends on many factors and using Node.js covers many of them, that’s why applications in Node.js are more scalable and have higher performance.

The Popularity of Node.JS Among IT Companies

In this article, we’ve considered the ups and downs of Node.js backend development, and in addition, here is the 2020 survey, according to which Node.js holds on the top spot of the frameworks used by the development companies due to its excellent characteristics.

Accepting the obvious Node.js advantages, it’s worth mentioning that many giants in the IT-sphere have been performing backend development with Node.js, which has led them to the great performance of their applications, and hence, to the growing popularity. Among the magisterial companies that use Node.js:

And this is not a complete list. There are many more well-known companies who dealt with Node.js backend development but it may take hours to name them all. This list confirms the fact that Node.js can be successfully used for small projects as well as for enterprise-grade applications.

According to the statistics, Node.js developers are the most wanted on the software market so it might seem at first that it is rather difficult to hire those. However, supplying demands. Node.js is easy to learn not only from scratch but after having learned some others as well. That’s the reason why the number of Node.js backend developers is growing significantly. As a consequence, it causes reduced development costs while hiring such IT specialists. Altogether, if you seriously intend to hire a backend Node.js developer, you should acquire some knowledge about different engagement models, skills of Node.js backend developers, approximate cost, etc.

Speaking of the engagement models, functional and cross-functional teams should be mentioned. 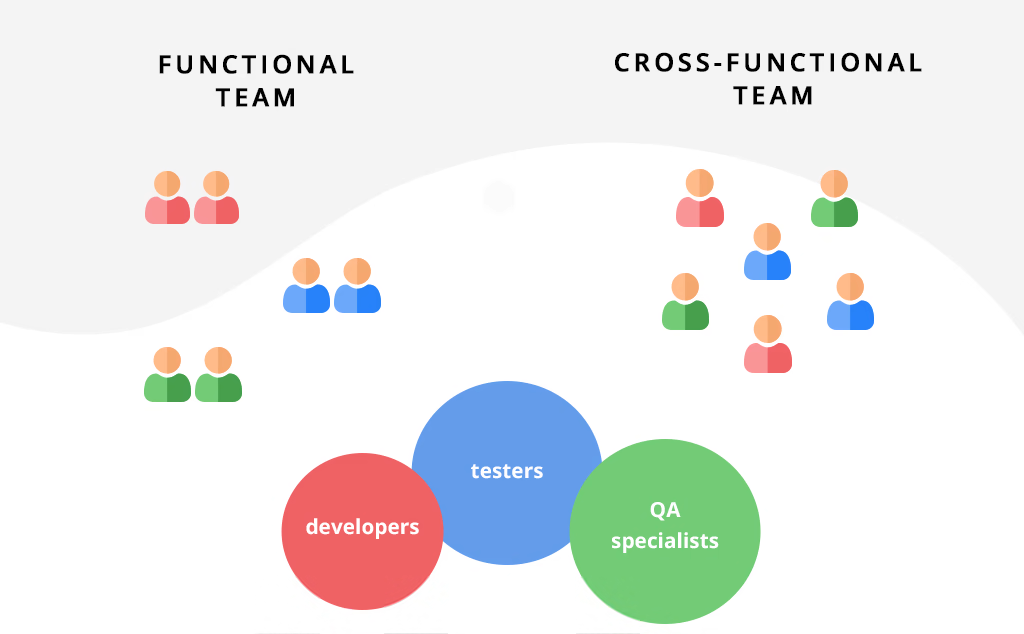 Their concept is: if you employ, for example, 9 people for working on a project, among them there probably will be 3 system analysts, 3 developers, and 3 testers. This is how a functional team looks like. A cross-functional team includes fewer people, and all of them are experienced in all the spheres needed for the project development (coding, hosting, maintenance, etc.). Among the advantages of the cross-functional team:

Now, when we’ve figured out why it is considered a good practice to assemble a forward-thinking team, let’s clarify why it is much easier to do with Node.js backend developers. As Node.js is practically JS, which is known by most IT specialists, there will be no gap between the front – and backend development. Therefore, the borders will smoothen and allow any participant of the team to pay certain attention both to the client- and server-side.