Want your Go programs to run faster? Optimizing string comparisons in Go can improve your application’s response time and help scalability. Comparing two strings to see if they’re equal takes processing power, but not all comparisons are the same. In a previous article, we looked at How to compare strings in Go and did some benchmarking. We’re going to expand on that here.

It may seem like a small thing, but as all great optimizers know, it’s the little things that add up. Let’s dig in.

So we know the first method is a bit easier. We don’t need to bring in any packages from the standard library, and it’s a bit less code. Fair enough, but which one is faster? Let’s find out.

Initially, we’re going to set up a single app with a test file. We’re going to use the Benchmarking utility from the Go test tools.

And we’ll create a set of tests for it:

For the string samples, I will change the last character to make sure the methods parse the entire string.

Some Notes if you’ve never done this:

To run our benchmarks, use this command:

Here are my results:

So using standard comparison operators is faster than using the method from the Strings package. 7.39 nanoseconds vs. 2.92. 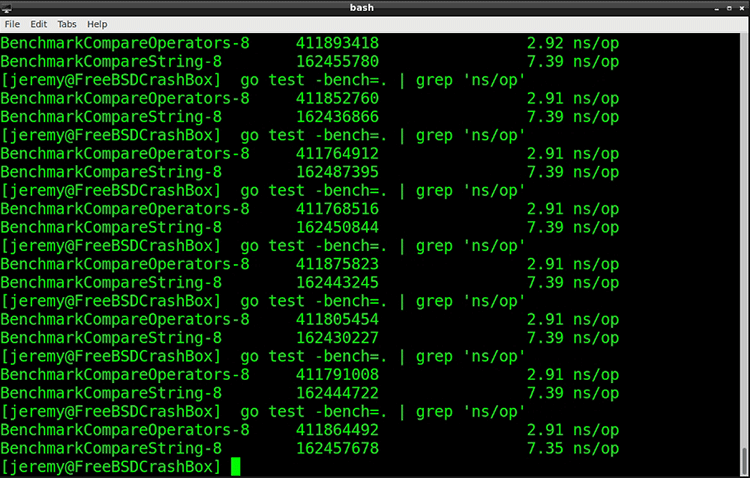 So, it’s clearly faster. 5ms can make a big difference at a large enough scale.

Let’s change it up. Generally, when I’m doing a string compare, I want to see if the test in the string matches, no matter which characters are capitalized. This adds some complexity to our operation.

With a standard compare, these two strings are not equal because the T is capitalized.

However, we are now looking for the text, and don’t care how it’s capitalized. So let’s change our functions to reflect this:

Now before each comparison, we make both strings lowercase. We’re adding in some extra cycles to be sure. Let’s benchmark them.

They appear to be the same. I run it a few times to be sure: 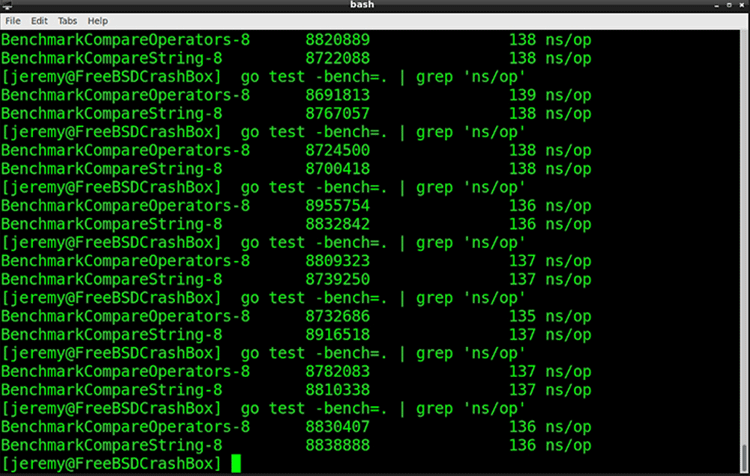 Yep, they’re the same. But why?

One reason is, we’ve added the Strings.ToLower action to every execution. This is a performance hit. Remember strings are simple runes, and the ToLower() method loops through the rune, making every character lowercase, then performs a comparison. This extra time washes out any big differences between the actions.

In our last article, we looked at EqualFold as another way of doing case insensitive compares. We determined Equalfold was the fastest of the three methods. Let’s see if this set of benchmark reflects that.

And add the following test to compare_test.go

So lets now run a benchmark on these three methods:

Wow! EqualFold is considerably faster. I run it several times with the same results.

Why is it faster? BecauseEqualfold also parses the rune character by character, but it “drops off early” when it finds a different character.

Let’s Ramp Up Our testing

Ok, so we know these benchmarks show significant differences between the methods. Let’s add in some more complexity, shall we?

In the last article, we added in this 200,000 line word list to make comparisons. We’ll change our methods to open up this file and run string comparisons till we find a match.

In this file, I added the name we’re searching for at the end of the file, so we know the test will loop through 199,000 words before matching.

Yes, each of these are now going to:

Let’s change our tests now, so the funcs only take one parameter:

So now, we can expect the test to take longer, so there will be fewer iterations from the benchmarking tool. Let’s run it:

And EqualFold still comes out on top, by quite a bit.

Adding to the complexity of this test is good and bad.

Is there any way we can make this comparison even faster? Of course. I decided to try counting the characters of the string. If the character count is different, it’s not the same string, so we can “duck out early” on the comparison altogether.

But we still need to include EqualFold in case the strings are equal length but different characters. The added check of the count makes the operation more expensive, so would it be faster? Let’s find out.

And it is indeed faster! Every little bit counts.

Verdict: Do a character count with your EqualFold comparison for even more speed

I love doing tests like this, and you’ll find small changes add up pretty nice when you’re doing optimization. Stay tuned for more articles where we look at optimizations like this.

What do you think? Let me know!