In this article, I will establish how the SQL language and its implementations distinguish between changed values and modified values, where a changed value is a value that has been “touched” but not necessarily modified, i.e. the value might be the same before and after the change.

Many ORMs, unfortunately, either update all of a record’s values or only the modified ones. The first can be inefficient and the latter can be wrong. Updating the changed values would be correct.

Note that you may have a different definition of changed and modified. For this article, let’s just assume that the above definition is as valid as it is useful.

A very interesting discussion was triggered recently by Vlad Mihalcea who was looking for an answer to this interesting question:

What’s the overhead of updating all columns, even the ones that haven’t changed?

Apart from the question being very interesting from a performance perspective, the tweet also inspired functional aspects of a distinction between updating all columns vs. updating some columns, which I’ll summarize in this article.

Note: By ORM, I understand any tool that maps from a client side representation of your database schema to the database schema itself, regardless if the product supports full-fledged JPA-style object graph persistence or “merely” implements an “active record” pattern such as jOOQ 3.x (I find that distinction a bit academic).

All such ORMs have a client side representation of a database record, for instance, given the following table (I’m going to be using PostgreSQL syntax):

You’re going to have a client-side representation as the following (using Java, for example, jOOQ or JPA):

In principle, these two approaches are the same thing with the distinction that jOOQ explicitly governs all UpdatableRecord interactions through type inheritance, whereas JPA makes this dependency more implicit through annotations:

In principle, the distinction is just a matter of taste, a programming style: explicit vs. declarative.

But from a practical perspective, the JPA implementation lacks an important feature when it comes to synching the state back to the database. It cannot reflect change, only modification.

How to Synch the State Back to the Database

Let’s assume we have a customer called John Doe:

And that customer now changes their names to John Smith. We have several options of sending that update to the database through PATCH or PUT semantics — terminology used by Morgan Tocker in another tweet in that discussion: 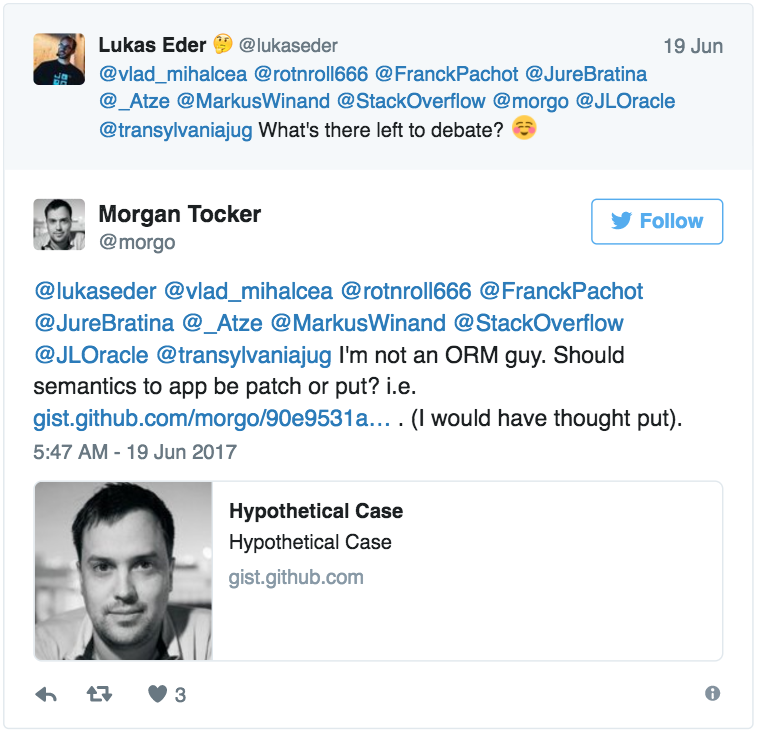 In Favor of PUT

The two operations are semantically very different. If another session attempts to rename this customer to Jane Doe concurrently (and without optimistic locking being in place), then the PATCH operation might result in an inconsistent outcome (Jane Smith), whereas the PUT operation would still produce one of the expected results, depending on what write is executed first:

This is one of the reasons why Hibernate, as a JPA implementation, always implements PUT semantics by default, sending all the columns at once. You can opt out of this by using the @DynamicUpdate, which will only update modified values (not “changed” values; I’ll explain this distinction later).

This makes perfect sense in such a trivial setup, but it is a short-sighted solution when the table has many more columns. We’ll see right away why...

In Favor of PATCH

And, of course, once you agree that the above design is a suitable one, you’ll immediately agree that here, PATCH semantics is more desirable than PUT semantics:

Not only do we update only an individual column, we’re doing it entirely in SQL, including the calculation. With this approach, we do not even need optimistic locking to guarantee update correctness, as we’re not using any client side cached version of the customer record, which could be out of date and would need optimistic (or worse: pessimistic) locking.

If we implemented this differently, using client side calculation of the updated clicks/purchases counters…

…then we’d need one of these techniques:

All of the above options have significant drawbacks, the easiest solution is to just increment the counter directly in the database.

And don’t forget, if you choose a bind-variable based solution, and opt for updating all the columns, rather than just the changed one, your first_name/last_name updates might conflict with these counter updates as well, making things even more complicated.

In fact, from a semantics perspective, if you do want to use an ORM to update an entity, you should think about a partial PUT semantics, which separates the different entity elements in “subentities.” From a relational perspective, of course, no such thing as a subentity exists. The above example should be normalized into this, and we would have much fewer concurrency issues:

This way, the previously mentioned PUT semantics would not create situations where individual semantically unrelated updates (updates to names, updates to clicks) would interfere with each other. We would only need to make sure that, for example, two competing updates to clicks are correctly serialized.

Practically, we often don’t design our databases this way, either for convenience reasons, for optimized storage, or for optimized querying (see our article when normalization and surrogate keys hurt performance).

So that “subentity” is really just a logical thing that can be represented as a logically separate entity in JPA, or we can use jOOQ, which works a bit differently here. In jOOQ, we can change an UpdatableRecord only partially, and that partial change is sent to the server:

This will send the following statement to the server:

Optionally, just as with JPA, you can turn on optimistic locking on this statement. The important thing here is that the clicks and purchases columns are left untouched, because they were not changed by the client code. This is different from JPA. It either sends all the values by default or, if you specify @DynamicUpdate in Hibernate, it would send only the last_name column — because while first_name was changed, it was not modified.

As you can see, these are different things, and it is quite hard for a JPA-based API like Hibernate to implement changed semantics because of the annotation-based declarative nature of how entities are defined. We’d need some sophisticated instrumentation to intercept all data changes even when the values have not been modified (I didn’t make those attributes public by accident).

Without this distinction, however, it is unreasonable to use @DynamicUpdate in Hibernate, as we might run into that situation we didn’t want to run into, where we get a customer called “Jane Smith” — or we use optimistic locking, in the case of which, there’s not much point in using @DynamicUpdate.

From a database perspective, it is also important to distinguish between change and modification semantics. In the answer I gave on Stack Exchange, I’ve illustrated two situations:

Thus far, we’ve discussed only UPDATE statements, but similar reasoning may be made for INSERT as well. These two statements are the same:

This one, however, is different:

In the first case, a DEFAULT clause (for example, timestamp generation, identity generation, trigger value generation, etc.) may apply to the column c. In the second case, the value c is provided explicitly by the client.

This can only be achieved when an ORM implements changed semantics, like jOOQ does. When you create a customer with jOOQ, then clicks and purchases will have their DEFAULTapplied:

In both cases, that’s what the user tells jOOQ to do, so jOOQ will generate a query accordingly.

Back to UPDATE Statements

It results in the following output:

As you can see, the trigger doesn’t fire when we only update column b, which it is not interested in. Again, this goes in the direction of distinguishing between changed and modified values, where a trigger fires only when a value is changed (but not necessarily modified).

Now, if an ORM will always update all the columns, this trigger will not work correctly. Sure, we can compare :OLD.b and :NEW.b, but that would check for modification, not change, and it might be costly to do so for large strings!

While one of the reasons the Hibernate team mentioned in favor of updating all the columns is improved cursor cache performance (fewer distinct SQL statements need to be parsed by the database as there are fewer distinct update configurations), I suggest that this “premature optimization” is negligible. If a client application runs dynamic updates (in the jOOQ sense, where changed values are updated, not just modified values), then chances that the possible SQL statements that need to be parsed will explode are slim to non-existent.

I would definitely like to see real-world benchmarks on this topic!

Batching: Weakly in Favor of PUT

When you want to batch tons of update statements from JDBC, then indeed, you will need to ensure that they all have the exact same SQL string. However, this is not a good argument in favor of using PUT semantics and updating all columns.

I’m saying “not good” because such a batched update should still only consider a subset of the columns for updates, not all the columns. And that subset should be determined on aggregated changed flags, not data modification.

Index updates: In Favor of PATCH (Depending on the Database)

Most databases optimize index updates to ignore indexes whose columns have not been changed. Oracle also doesn’t update indexes whose columns have not been modified, in case of which PUT and PATCH semantics both work the same way from an indexing perspective. Other databases may not work this way, where PATCH semantics is favorable.

But even if the optimization is in place, the old and the new values have to be compared for equality (i.e. to see if a modification took place). You don’t want to compare millions of strings per second if there’s no need to do so! Check out Morgan Tocker’s interesting answer on Stack Exchange, from a MySQL perspective.

So, why not just prevent expensive modification checks by telling the database what has changed, instead?

UNDO Overhead: In Favor of PATCH 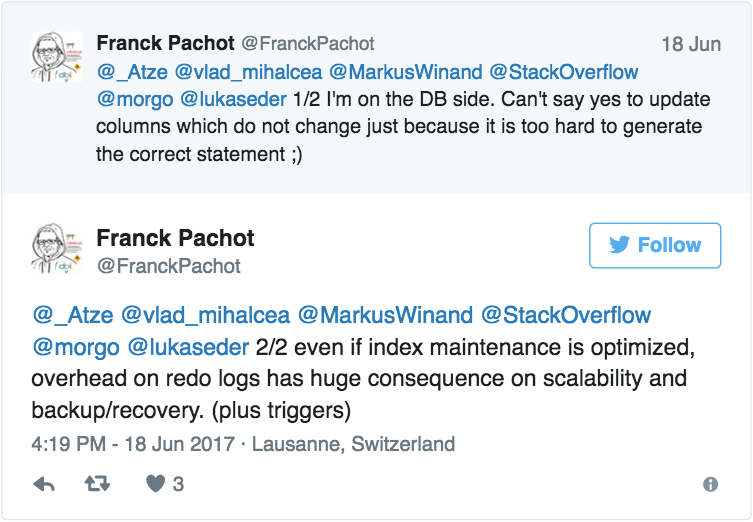 Don’t forget that this can also affect backup performance! 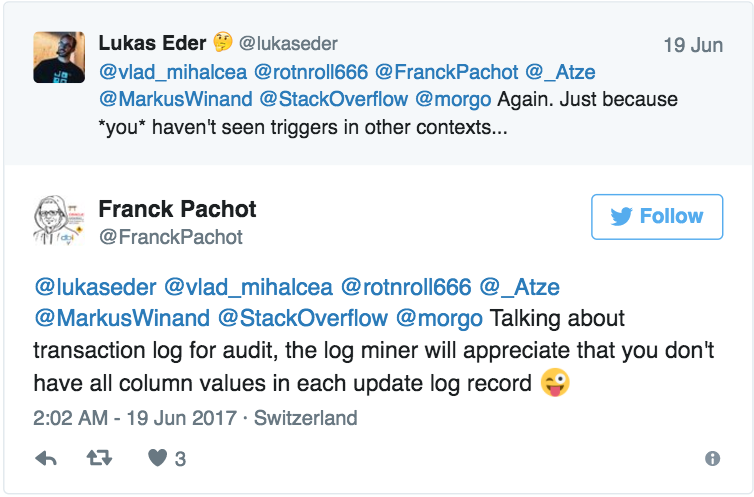 More performance-related information can be found in this blog post.

Note: While these bits of information were mostly Oracle-specific, common sense dictates that other RDBMS will behave in similar ways.

With all these negative aspects to including unnecessary columns for update through an ORM compared to the almost negligible benefits, I’d say that users should move forward and completely avoid this mess. Here’s how:

In short, as Michael Simons said: 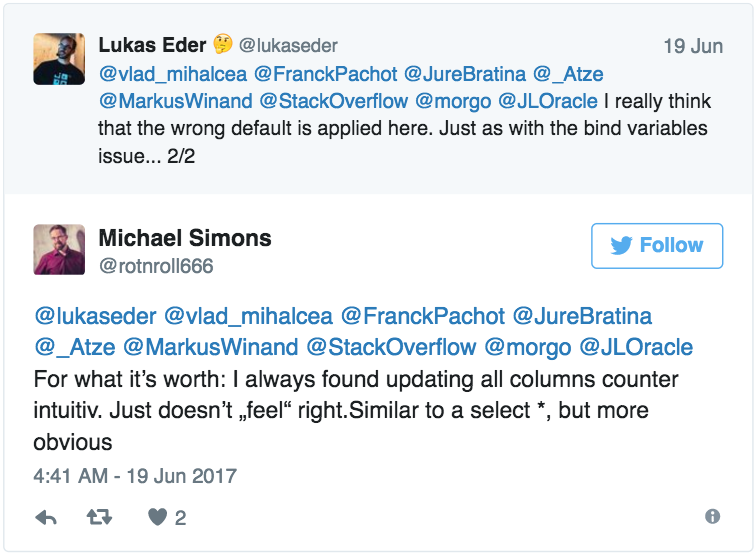 And we all do feel very dirty when we write SELECT *, right? So we should at least be wary of updating all the columns, as well.