The release of Java Development Kit (JDK) 9 in September of last year brought with it many improvements to both the Java Virtual Machine (JVM) and the Java Language Specification (JLS). Foremost among these additions was the inclusion of the JDK Enhancement Proposal (JEP) 261: The Module System (nicknamed Project Jigsaw), which introduced one of the most comprehensive overhauls of the JVM since its creation. Behind all of the fanfare, there were also 85 non-module JEPs contained in the release, including the addition of a Hypertext Transfer Protocol (HTTP) 2 client (JEP 11o), jshell (JEP 222), and important concurrency updates (JEP 266). Within these concurrency updates, a major improvement was made to the Java standard libraries: Reactive Streams.

The Reactive Streams initiative was started in 2013 by some of the most influential web application companies (include Netflix) as a means to standardize the exchange of asynchronous data between software components. As more frameworks and library builders supported this initiative and its specification, various Java implementations of this standard began to appear. Due to the simplicity of the Reactive Stream standard, many of the interfaces that made up these implementations were identical, separated only by their package names. In order to reduce this duplication and importation incompatibility, Java 9 now includes basic interfaces for each of the fundamental Reactive Stream concepts in the Flow Concurrency library. This allows all Java applications to depend on this one library for Reactive Stream interfaces, rather than deciding on a specific implementation.

What Are Reactive Streams?

In many applications, data is not retrieved from a fixed storage device, but rather, handled in near-real-time, with users or other systems rapidly injecting information into our system. Most times this data injection is asynchronous, where we do not know ahead of time when the data will be present. In order to facilitate this asynchronous style of data handling, we have to rethink older polling-based models and instead, use a lighter, more streamlined method. 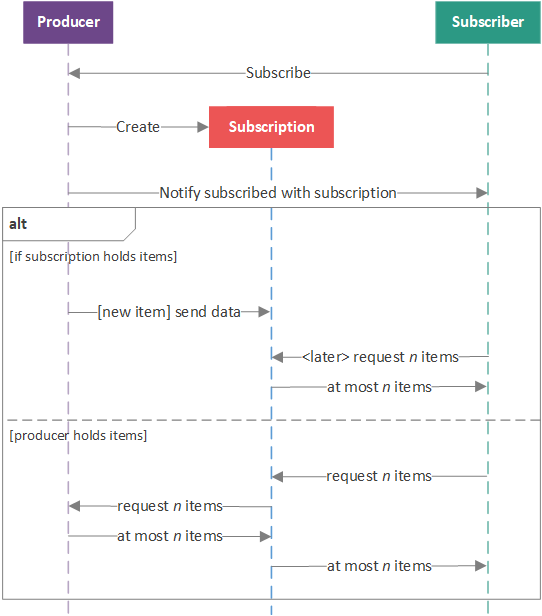 If an entity is both a publisher and a subscriber, it is called a processor. A processor commonly acts as an intermediary between another publisher and subscriber (either of which may be another processor), performing some transformation on the stream of data. For example, a processor can be created that filters out items that match some criteria before passing them onto its subscriber. A visual representation of a processor is illustrated in the figure below.

With a foundational understanding of how reactive streams operate, we can transform these concepts into the realm of Java by codifying them into interfaces.

Given the description above, Reactive Streams are made up of four main entities: (1) publishers, (2) subscribers, (3) subscriptions, and (4) processors. From an interface perspective, publishers are only required to allow subscribers to subscribe to them. Therefore, we can create a simple interface for a publisher, where the formal generic type parameter, T, represents the type of the items that the publisher produces:

This interface definition requires that we subsequently define the interface for a subscriber. As stated above, a subscriber has four main interactions: (1) notification of being subscribed, (2) accepting pushed items, (3) accepting errors that occur in a subscribed publisher, and (4) notification when a publisher is complete. This results in the following interface, which is likewise parameterized by the type of the items it requests:

Next, we must define the interface for a subscription. This entity is simpler than a subscriber and responsible for only two actions: (1) accepting requests for items and (2) being canceled. This results in the following interface definition:

How Do Reactive Streams Work in Java?

The standard Java port of the Reactive Streams interfaces is found in the java.util.concurrent.Flow class and are bundled as static interfaces within the Flow class. With the JavaDocs removed, the Flow class is defined as follows:

While there is not much new to discuss when comparing the Reactive Streams JVM specification to the standard Java definitions, the standard Java version does include one publisher implementation: SubmissionPublisher. The SubmissionPublisher class acts as a simple publisher, which accepts items to push to subscribers using a submit(T item) method. When an item is submitted to the submit method, it is asynchronously pushed to subscribers, as in the following example:

Running this example results in the following output:

In our main method, we simply instantiate a SubmissionPublisher and our PrintSubscriber and subscribe the latter to the former. Once the subscription is established, we submit the values 0 through 9 to the publisher, which in turn asynchronously pushes the values to the subscriber. The subscriber then handles each item by printing its value to standard output and informs the subscription that it is ready to accept another value. We then pause the main thread for 1 second to allow for the asynchronous submissions to complete. This is a very important step since the submit method asynchronously pushes the submitted items to its subscribers. Therefore, we must provide a reasonable period of time for the asynchronous action to complete. Lastly, we close the publisher, which in turn notifies our subscriber that the subscription has completed.

We can also introduce a processor and chain the original publisher and subscriber with this processor. In the following example, we create a processor that increments received values by 10 and pushes the incremented values to its subscriber:

Running this example results in the following output:

As we expected, each of the pushed values is incremented by 10 and the events received by the processor (such as receiving an error or completing) are forwarded to the subscriber, resulting in a completed message printed for both the PlusTenProcessor and the PrintSubscriber.

In the age of near-real-time data processing, Reactive Streams are a de facto standard. The ubiquity of this programming style has led to numerous implementations of this standard, each with its own duplicate set of interfaces. In an effort to collect these common interfaces into a universal standard for Java, JDK 9 now includes Reactive Streams interfaces, along with a powerful publisher implementation, by default. As we have seen in this article, while these interfaces are unassuming in appearance, they provide a rich method for handling streaming data flows in a standard, interchangeable manner.