In this tutorial, we will discuss about the distributed transactions and how to handle it using the Saga pattern.

Assuming we have three microservices (service, service2, and service3) and based on some transactions that happened in service1, it will trigger an event which calls the next microservice i.e. step 2 and similarly service2 will call service3 microservice.

and we have a distributed transaction use case.

This is where Saga pattern comes to rescue.

Saga pattern is an asynchronous and event-driven design pattern which consists of a sequential/parallel chain of microservices (steps) which are been called based on some events(transactions) that occur from within a single microservice.

We can also say Saga pattern is a fail-over and compensating handling pattern, so whenever there is any failure, it will execute the corresponding compensating action to return the initial state from where the Saga flow started.

So to implement the saga pattern one of the best solution is to use AWS step function.

Lets understand what is Step function and  how it can fit to our use case.

Now as we understand state machine consist of different states and states consist of task.

Let's develop the state machine for our use case.

The notable part is Type, Resource (It is used to trigger Transaction event for service1 mostly done via calling AWS lambda function), Catch(this is used to rollback the transaction occurred by service1, for achieving the same we create the new state i.e. rollback Service1), ResultPath(It is helpful for passing the output of first state to another state), and Next(It is use to call the next state from existing state)

Similarly, we can develop the states for Service2 and Service3 along with the rollback states for both the services.

Below I am sharing the final state machine JSON along with AWS generated visual workflow with all the scenario which we have discussed at the starting of the discussion.

I hope now you are able to understand why we called it a compensating transaction. 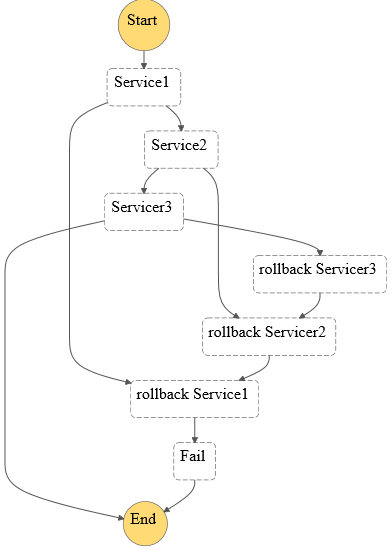