Mule variables are used to store values for use in a flow or mule app. The values that can be stored in variables are objects, strings, numbers, messages, message attributes, message payloads, and dataweave expressions.

Mule 3 has 3 different types of variables:

However, in Mule 4, the record variable is not there.

In this article, we will see how these variables are processed in an async scope of a flow.

Async Flows don't send any response to parent flow. Let us see this in the example below: 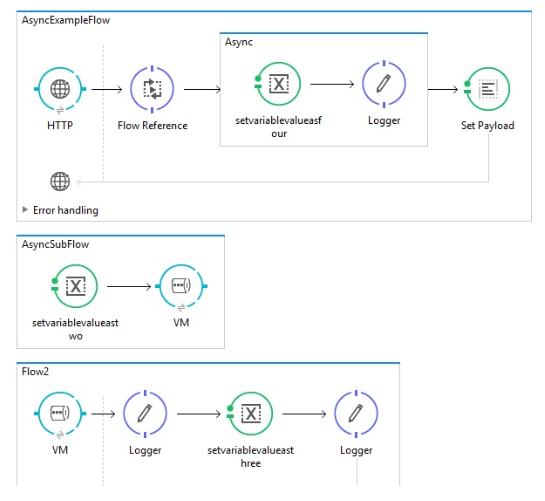 In the example, the parent flow named AsyncExampleFlow calls the SubFlow named AsyncSubFlow using a flow reference component where the variable named number is set with value two.

From subflow (AsyncSubFlow) through VM connector, Flow2 is getting called since the flow variable crossed the transport barrier and the value of the number variable set in subflow is not applicable to Flow2.

The variable number is not accessible in the first logger in Flow2.

In Flow2, the number variable value is set as three. In the log, the value is printed as three from the second logger.