A cost-effective and less sophisticated alternative to Virtual Machines (Containers) have revolutionized the application delivery approach. They have dramatically reduced the intake of IT labor and resources in managing application infrastructure. Yet, while securing containers and containerized ecosystems, software teams are met with many roadblocks. Especially for enterprise teams accustomed to more traditional network security processes and strategies. We’ve usually preached that containers offer better security because they isolate the application from the host system and each other. Somewhere we have made it sound like they’re inherently secure and almost impenetrable to threats. But how far-fetched is this idea? Let’s dive right into it.

Let’s get a high-level view of what the market looks like. According to Business wire, the global Container Security Market size is projected to reach $3.9 billion by 2027, that’s a 23.5% CAGR.

Pretty much like any software, containerized applications can fall prey to security vulnerabilities that include bugs, inadequate authentication and authorization, and misconfiguration. 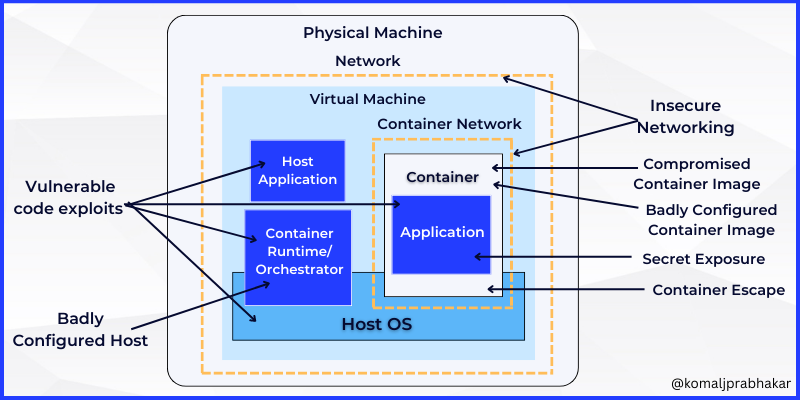 Possible Vulnerable Factors in a Container

There can be several routes that can compromise your container security (and the above image pretty much summarizes so). Let’s discuss some of these factors precisely.

1. The Fault in Container Images

It’s not all about having malicious software. Poorly configured container images can be the reason for introducing vulnerabilities. The problem begins when people think they can spin up their own image or download it from the cloud and start using it straight. We should be aware that every day new vulnerabilities are introduced on the cloud. Every container image needs to be scanned individually to prove it is secure.

Some Known Cases To Avoid

Note: From all the above cases, we notice that Docker will always give priority to its own network above your local network.

2. Watch Out for Your Orchestration Security

Popular orchestration tools like Kubernetes is unmissable while addressing security issues. It has become the prime attack surface.

According to Salt Security, approximately 34% of the organizations have absolutely no API security strategy in place. Adding to that, 27% say they have just a basic strategy that involves minimal scanning and manual reviews of API security status and no controls over them.

When Kubernetes is handling multiple containers, it is, in a way, exposing a large surface area for attack. Following industry-wide practiced field-level tokenization is not enough, when we are not securing the orchestrator’s ecosystem. Because it’s just a matter of time before the sensitive information gets decoded and exposed.

Popular container runtimes such as containerd, CRI-O, and rkt might have hardened their security policies over time, however, there’s still the possibility of them containing bugs. This is an important aspect to consider because they can allow mischievous code to run inside the “container escape” out onto the host.

If you remember back in 2019, a vulnerability was discovered in runC called Runscape.

This bug (CVE-2019-5736 ) had the potential to enable hackers to break away from the sandbox environment and gave root access to the host servers. This led to compromising an entire infrastructure. At first, they assumed that it could be a malicious Docker image as there has to be a malicious process inside. After all tests, they realized it was a bug in runC.

While dealing with a microservices-based environment, the best practice says to bring in automated deployments at every step. We are not agile if we are still performing deployments manually, following a weekly or monthly cadence. To actually shift left in application delivery, we need to create a modern toolchain of security plugins and their extensions throughout the pipeline.

This is how it works: if there’s any vulnerability present in the image, the process should stop right there in the build stage. Periodic audits should be conducted on RBACs to monitor all access levels. Also, all the tools and processes should align with the CIS benchmarks.

A good approach will be to adopt security-as-code practices to write the security manifest for Kubernetes-native YAML files as custom resource definitions. These are human-readable and declare the security state for the application at runtime. Now, this can be pushed into the prod environment and protected with the zero-trust model. Thus, there are never any changes to the code outside the pipeline.

It’s time to wrap our thoughts around containerization and container security handling. My goal was to highlight some of the easily doable, yet highly neglected zones while practicing containerization. Today, automated security processes across CI/CD pipelines and declarative zero-trust security policies are the need of the hour. They enhance developer productivity and are a part of DevOps best practices.