According to the Developer Survey 2019 by StackOverflow, Python is considered to be the fastest-growing programming language. Though PyUnit (or unit test) is the default Selenium test automation framework in Python, many developers and testers prefer the pytest framework.

pytest is a popular Python testing framework, primarily used for unit testing. It is open-source and the project is hosted on GitHub. pytest framework can be used to write simple unit tests as well as complex functional tests.

It eases the development of writing scalable tests in Python. Unlike the PyUnit (or unit test) framework, tests written using pytest are expressive, compact, and readable as it does not require boiler-plate code.

Selenium testing with Python and a pytest is done to write scalable tests for database testing, cross-browser testing, API testing, and more. It is easy to get started with pytest, as the installation process is very simple.

The pytest framework is compatible with Python 3.5+ and PyPy 3. The latest version of the pytest is 5.4.1.

To know more about the pytest you can visit the pytest website and pytest GitHub repository.

Below are some of the interesting facts about pytest obtained from the project’s GitHub repository:

Here are some of the primary advantages of Selenium testing with Python and pytest:

Getting Started With Selenium Testing With Python and Pytest

As the pytest is not a part of the standard Python library, it needs to be installed separately. To install pytest, you have to execute the following command on the terminal (or command prompt) that makes use of the Python package manager (pip):

The following command should be executed to verify the status of the installation:

Here is the output when the installation is performed on the Windows 10 machine:

PyCharm is the most popular IDE for development using the Python language.

Depending on the requirement, you can opt for the Community version or the Professional version. The community version of PyCharm is free and open-source; the same can be downloaded from PyCharm official download link. 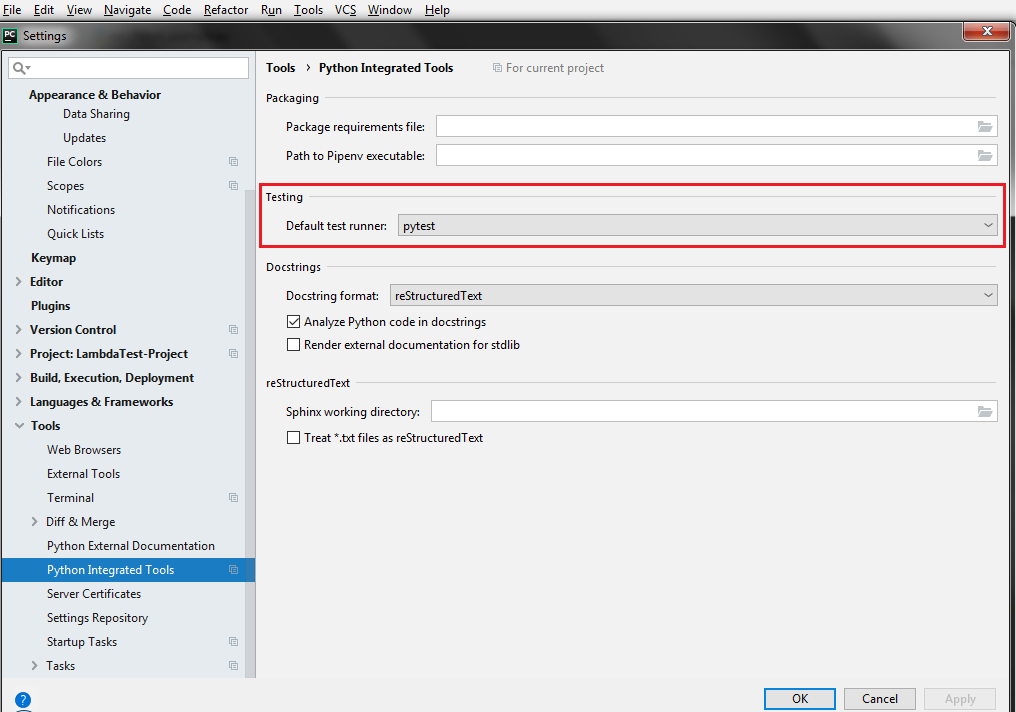 As the pytest will be used for automated browser testing, we also have to install the Selenium package for Python. Selenium for Python can be installed by executing the following command on the Windows terminal (or prompt) or the terminal of PyCharm. 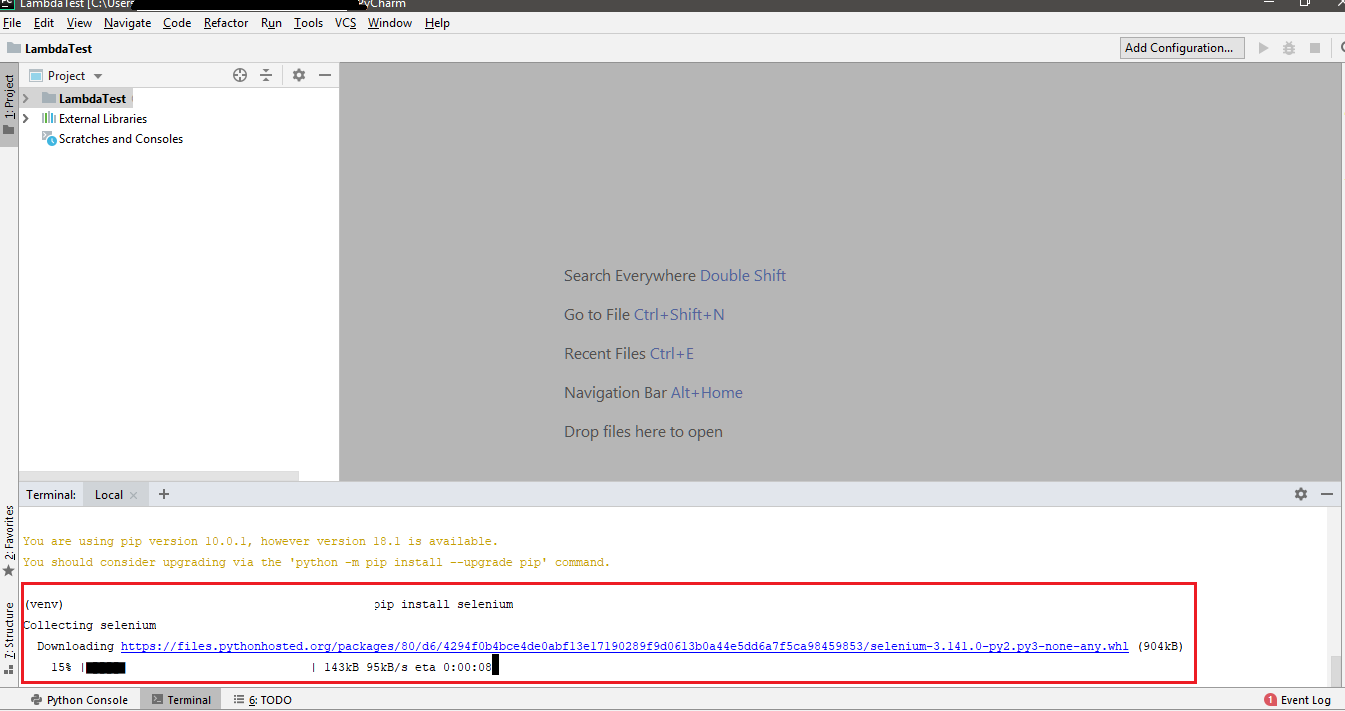 With this the environment setup for Selenium testing with Python and pytest (including automated browser testing) is complete.

Prerequisites For Selenium Testing With Python and Pytest

For using the pytest framework, Python needs to be installed on the machine. Python for Windows can be downloaded from here. Along with Python 3.5+, the pytest is also compatible with PyPy3. Prior knowledge of Python will help get started with Selenium automation testing with pytest.

It is always a good practice to install the WebDriver for the corresponding web browser in the location where the browser executable (.exe) is present. By doing this, you do not have to specify the WebDriver path when instantiating the browser.

How Pytest Identifies the Test Files And Test Methods

Executing the pytest command (without mentioning a filename) on the terminal will run all the Python files that have filenames starting with test_* or ending with *_test.  These files are automatically identified as to test files by the pytest framework.

The framework also mandates that the test methods should start with ‘test’ else the method will not be considered for execution. Below are two mandatory requirements for test code for Selenium testing with Python and pytest.

These are mandatory requirements as the pytest has features built-in to the framework that supports the auto-discovery of test modules and test methods (or functions).

To demonstrate Selenium testing with Python and pytest, I’ll  test the LambdaTest ToDo App scenario for this Selenium Python tutorial:

1. Navigate to the URL https://lambdatest.github.io/sample-todo-app/

3. Send ‘Happy Testing at LambdaTest’ to the textbox with id = sampletodotext

4. Click the Add Button and verify whether the text has been added or not

The implementation file (Sample.py) can be located in any directory as the invocation will be done using the filename.

Step 2 — The test name starts with test_ (i.e. test_lambdatest_todo_app) so that the pytest can identify the test. Using the Selenium WebDriver command, the Chrome WebDriver is instantiated. The URL is passed using the .get method in Selenium.

Step 3 — The Inspect Tool feature of the Chrome browser is used to get the details of the required web elements i.e. checkboxes with name li1and li2 and button element with id = addbutton.

Step 4 — The close() method of Selenium is used to release the resources held by the WebDriver instance.

The following command is executed on the terminal after navigating to the directory that contains the test code.

Using --verbose, the verbosity level is set to default. The --capture=no is used to capture only stderr and not stdout.

For adding more options to the pytest command, you can execute the --help option with pytest.

Here is the snapshot with the test execution in progress:

In this introductory article of the ongoing Selenium Python tutorial series, I gave you a  brief look at Selenium testing with Python and pytest. pytest is one of the most popular Selenium test automation frameworks in Python.

The availability of fixtures and classes makes it an ideal framework for automation testing, including cross-browser testing.

You should now be able to do Selenium Python testing with pytest.In case of any doubt, do reach out to us. Feel free to share this article with your peers and help us reach out to them. That’s all for now.