In computer networks, TCP (Transmission Control Protocol) is a standard that defines how a connection is established and maintained through which the applications can exchange data. A TCP connection object can be in the following states:

Before we move on to demonstrate the code example of state design pattern in Java, let us first see what are the key classes (participants) we need to understand the example better.

The context defines an interface that maintains an instance of ConcreteState subclass that defines the current state.

The state defines an interface for encapsulating the behavior associated with a particular state of the Context.

The Concrete state subclasses can be thought of as the instances of the connection object in- (established, listening or closed ) states as mentioned earlier. They implement the behavior of the state of the Context.

We will demonstrate a highly simplified version of a start and pause feature of a game. The implementation is as follows:

StartState is a concrete subclass that represents the “start state” of a game. It overrides the method inherited from the interface and also has a method that returns a string stating “start state” 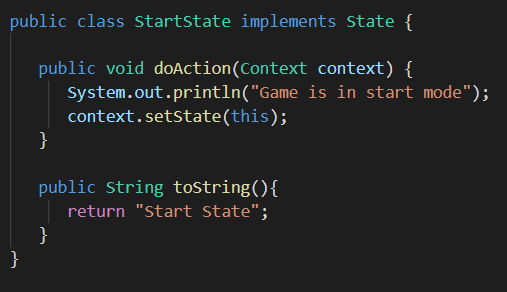 Stop state is also a concrete subclass of the state interface. The only variation is that it represents the “paused” state of the game. 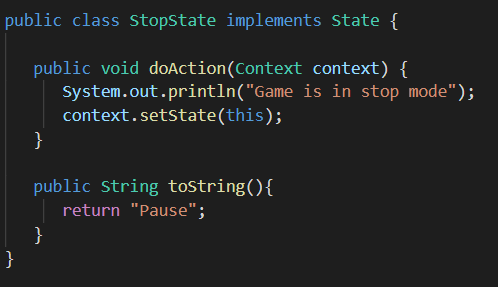 Context, as defined previously maintains the instance of a ConcreteState subclass, StopState or Start state in our case. 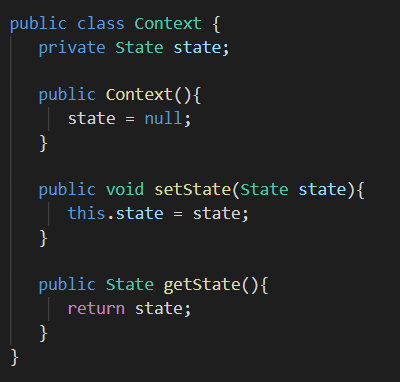 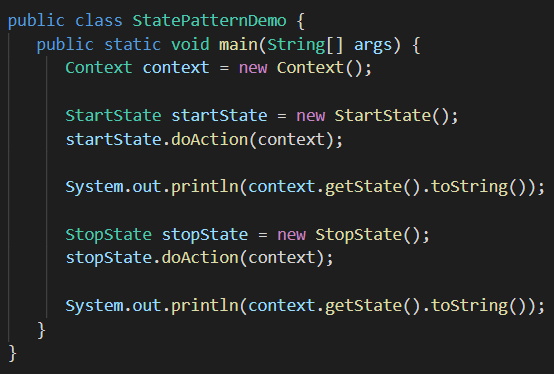 What Exactly Is Happening Here?

Context class delegates request that are specific to state to the ConcreteState object (startstate/stopstate in our case). The state object is being passed the context as an argument for accessing the context.

What Did We Achieve with The Help of The State Design Pattern in Java?

The state design pattern in Java should be used if we have different behavior for each state of our object. Possibilities are we may need to configure the transition at run time. It can come in handy in creating GUIs for a game as well. At run time the user may want a different interface for a particular level or the game itself might change the states according to the level of the game played.