Usability is not the goal for these languages nor they find their roots in academia. They are above all programming paradigms but still maintain their reputation of being a Turing Complete language - well some of them.

These languages are a way of cultural expression through coding.

I have created a list of programming languages that people would mark 'esoteric'. According to Wikipedia though

Velato was developed by Daniel Temkin in 2009. The source code in Velato is actually a MIDI file. Don't believe me? Here's how Hello World looks like in this esolang.

This language is a parody of one-liners from Arnold Schwarzenegger's famous movies like Terminator and Predator. We all love his one-liners but turning that into a program is a pure savage thing to think let alone actually developing the whole language. But Lauri Hartikka is an avid Arnold fan and he decided to build a programming language using Scala.

The bare minimum to start coding in this language, you'll need

Every variable must be a one-liner from his movie like HEY CHRISTMAS TREE or YOU SET US UP. You can give it a look at the creator's GitHub for some complex programs.

Yes. A programming language on arguably the World's finest writer, poet, and dramatist. Although, this language not really look like one. Rather it looks like a play written by this great Jacobean era juggernaut. Just like ArnoldC, the variables must be named after the leading characters from his plays, and each program is divided into Acts and Scenes.

All the world’s a stage

And all the men and women merely players

With these magical lines from the spellbinding poem, let's begin with the play. I mean the source code which is in the form of a play. :)

You can copy the code of the function Hi_to_shakespeare.spl from here.

This returns HI as the output.

If English poetry is not your cup of tea, you may prefer making code look like a recipe. You'll still be getting the output on the screen not on your plate, though(It should not be confused with the Chef Configuration Management Tool). The developers should keep in mind the following design principles

Have a look at the code that makes some delicious Fibonacci popcorn with cheese.

This language would be on the numero uno spot in any insane programming language list ever made... I mean who can use colors instead of words to code. It's out of this world.

It's boasted of being the only language that turns modern art into a meaningful output. Although modern art does have meanings, we programmers are too naive to understand. (Our understanding of modern art resembles the understanding of our code by these artists.) But there is one compiler that can convert this art into some valid output in a way that even we can understand - npiet.

Piet uses 6 colors with 3 lightness cycles plus black and white. 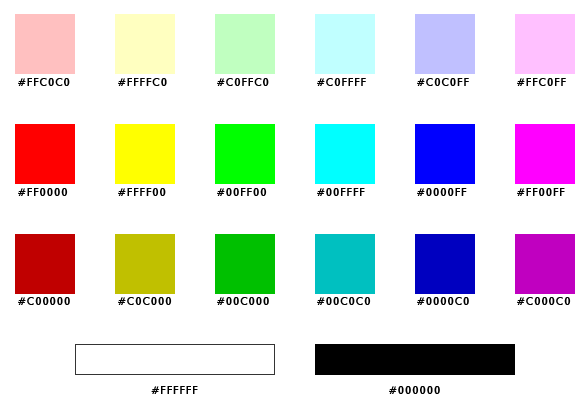 This is how the Tower of Hanoi program(art) looks like:

That's it from the list of some uncommon programming languages. If you want to learn some serious coding, you can refer to my other blogs.